Mary Caffrey
Director Tom Frieden, MD, MPH, said the results show that a population health—based approach can save lives and money when there are "rigorous" standards for accountability.
Rates of end-stage renal disease (ESRD), when patients experience kidney failure with dialysis or transplant, have been cut in half in 20 years among Native Americans, thanks to a population health effort approved by Congress, the CDC reported Tuesday.

CDC Director Tom Frieden, MD, MPH, said the findings matter beyond the Native American population because they show that population-based approaches, “involving a team and with rigorous accountability for progress,” can save lives and cut costs—even in a high-risk population.

Diabetes is the leading cause of ESRD, accounting for 44% of all cases and 69% of new cases among Native Americans. This group has faced increased risk of diabetes and ESRD for reasons of poverty and lack of access to care, which the IHS has addressed over the past 2 decades. ESRD is a leading reason why diabetes costs the United States $245 billion in medical care and lost productivity; Frieden said Medicare spends about $82,000 a year for each person on dialysis.

CDC data show Native Americans face twice the risk of diabetes as whites, with the disease affecting 16% of the native population. The rise of diabetes among this group in recent decades contrasts with their health status from earlier decades. For generations, Native Americans were virtually free of the disease when food was hunted, gathered, or farmed. The American Diabetes Association has launched special efforts to prevent the disease among Native Americans, in part by encouraging these groups to return to foods that were part of their ancestral diets.

The earliest efforts to combat diabetes in native groups dates to 1979, Smith said, but the population health approach took shape when Congress passed legislation in 1997 to create the Special Diabetes Program for Indians, which Smith says receives a $150 million annual appropriation to combat the disease on multiple fronts—from medication adherence, to transportation for clinic visits, to extensive health education for patients. “Coordination and resources have been key,” she said.

Researchers used data from the US Renal Data System, IHS, the National Health Interview Survey, and the US Census to figure out rates of diabetes-related ESRD among the general population and among Native Americans, who are listed as American Indians or Alaskan Natives. The CDC team found that rates for ESRD with diabetes fell 54%, from 57.3 per 100,000 of the population in 1996 to 26.5 per 100,000 in 2013.

While rates of diabetes-related ESRD fell across all demographic groups during that stretch, the researchers note the decline was steeper among Native Americans. Between 1996 and 2013, Native Americans with diabetes went from having kidney failure rates 5 times that of whites to rates on par with whites, according to the CDC data.

The study’s lead author, Ann Bullock, MD, with the IHS Division of Diabetes Treatment and Prevention, said the results cover the entire US population that identifies as Native American, which is about 4.5 million people; however, the concentrated efforts of the IHS cover only about half that population, or 2.2 million. Frieden said, given the magnitude of the reduction: “It’s hard to think of any other explanation than much better care.”

Getting people medication—and getting them to take it—has played a big role in driving down ESRD rates among Native Americans with diabetes. The study found a huge jump in prescriptions of key therapies, the angiotensin-converting enzyme inhibitors and the angiotensin II receptor blockers, in the early years of the Special Diabetes Program. Prescriptions rose from 42% of Native Americans with diabetes in 1997 to 74% in 2002, with the rate remaining relatively steady through 2015.

Frieden acknowledged that “it is somewhat less difficult to control complications of diabetes than to prevent diabetes in the first place,” but that doesn’t mean the CDC and other parts of the federal government aren’t trying. He pointed to plans for Medicare to fund the Diabetes Prevention Program staring in January 2018.

Other key health indicators for Native Americans diabetes include:

·         Among those in Medicare, 62% had a urine test to measure albumin-to-creatinine ratio, which evaluates whether there is kidney damage.

Bullock said that while Native Americans have the highest diabetes rates of any ethnic group, rates have been flattening out and may be starting to drop. “We are seeing some things turn around here,” she said. 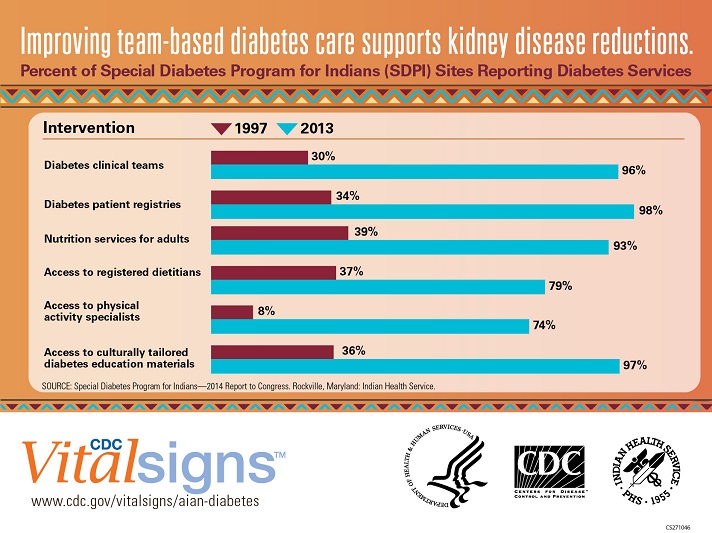