Just What Is the "Medicare Billing Dispute" in the Menendez Indictment?

Mary K. Caffrey
Senator Robert Menendez is accused of using his position to help a Florida doctor who split vials of the eye drug Lucentis and then billed Medicare for multiple treatments, despite warnings against this practice. In a key meeting, the indictment states, then-HHS Secretary Kathleen Sebelius told Menendez that Medicare was not going to pay twice for the same vial of medicine.
Amid the eye-catching allegations involving vacations, villas, and visas for foreign girlfriends, yesterday’s federal grand jury indictment of US Senator Robert Menendez, D-New Jersey, and Florida eye doctor Salomon Melgen involves charges about what has been called a “Medicare billing dispute,” one that ultimately cost Melgen $8.9 million.

So what was this dispute? According to the indictment, it involves Senator Menendez’s willingness to repeatedly intervene on Melgen’s behalf, as the doctor tried to avoid a huge repayment to the Centers for Medicare and Medicaid Services (CMS). According to the filing, Melgen’s problems with CMS began after an audit found he was improperly splitting vials of the eye drug Lucentis into 2 or 3 treatments. Not only did Melgen bill Medicare for multiple treatments off a single vial, but he also handled the drug in a way that could have caused infections in his patients, the indictment says.

Reducing “patient harms” has been a goal of the Affordable Care Act, one highlighted just this week by President Barack Obama, as he touted a report from the Agency for Healthcare Research and Quality, which found reductions in patient deaths between 2010 and 2013. Patient harms also include hospital-acquired infections and adverse drug reactions.

Lucentis received FDA approval in 2006 to treat age-related macular degeneration. In its press release announcing the approval, FDA noted that the biologic treatment was a “new molecular entity,” that contained an active substance had never before been approved in the United States. As described by both the FDA and yesterday’s indictment, the drug is administered by injection in the eye and only by a physician in the office; the indictment notes the drug is in a “preservative-free solution.”

Since 2006, Lucentis has been approved for 3 other indications, most recently for diabetic retinopathy in patients with diabetic macular degeneration. Competitors have since entered the market.

CDC guidelines warn again reusing the vials, and the FDA-approved manufacturing label for Lucentis (shown below) also reads, “Each vial should only be used for the treatment of a single eye.” 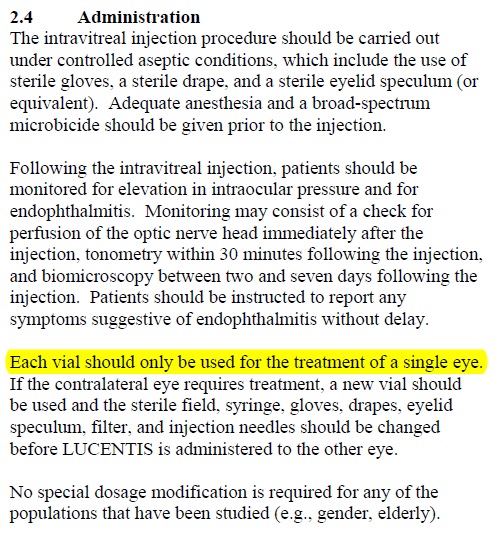 For an eye doctor based in an area with an older population, Lucentis would be an instant hit. Information from 2006 indicates that Genentech priced it at $1950 a dose. According to the indictment, in July 2008, the Medicare contractor assigned to South Florida requested copies of Melgen’s practice records for the period of February 1, 2007 through December 21, 2007. Later, records were drawn for January 2, 2008, through December 23, 2008.

Each vial of Lucentis is overfilled, to allow for enough active ingredient in case of spillage, but the instructions clearly state that the vial is not to be reused, even for the other eye in the same patient. The audit found that is what Melgen had done, yet he had billed Medicare the full cost for each treatment.

According to the indictment, Melgen learned around June 12, 2009, that Medicare would demand repayment of millions of dollars. Around that time, Senator Menendez engaged his staff in the cause of helping Melgen deal with this matter.

A full 10 pages of the indictment chronicle the efforts of Menendez’s staff and the senator himself as they carried the matter up senior levels of CMS. The indictment alleges specific strategies were devised to counter the fact that CDC had deemed reuse of the vials unsafe—instead, the argument would be that CMS’ reimbursement policies for Lucentis were vague, and, in fact, were being clarified.

The indictment quotes a memorandum written in advance of a phone call with the Acting Administrator of CMS:

“The CDC guidelines, while necessary to ensure patient safety and reduce the number of healthcare-associated infections, has no bearing on Medicare reimbursement policy.” The memo goes on to assert that if the reimbursement rules were unclear during 2007-2008, Melgen shouldn’t have to make repayment.

Menendez’s efforts culminated August 2, 2012, in what was described in the indictment as a “lively” meeting with then-US Secretary of Health and Human Services Kathleen Sebelius. The secretary told Menendez she disagreed with his position, and that “CMS was not going to pay for the same vial of medicine twice.” Sebelius said because the matter was now in the administrative appeals process, she was not about to interfere.

The indictment notes a $300,000 contribution went from Melgen's company in October 2012 to Majority PAC earmarked for New Jersey, where Menendez faced re-election against state Sen. Joseph Kyrillos.  Menendez won that race 59% to 39%. Melgen also sent 3 checks for $25,000 each to Democratic committees in New Jersey, the indictment states. Then, a week, later, according to the indictment, Melgen sent the senator an email, which included a memo by his lawyers titled: “MAC Appeal Update and Recent Developments,” using the common acronym for Medicare Administrative Contractor.

“You have asked us to provide an update on recent developments in other litigation matters relating to drug product overfill,” the memorandum states.