Travis Broome
Travis Broome is vice president of policy at Aledade, a new company helping doctors stay independent and thrive in the transition to value-based care. Joining Aledade early on, Travis helped Aledade grow from 2 accountable care organizations (ACOs) to 20 ACOs. From business development with both practices and payers, to early population health analytics, to serving as executive director for the Aledade Louisiana ACO, he has touched every part of Aledade as it has grown. Today, he is a thought leader on accountable care and is responsible for strategy development, policy analysis and economic modeling. Prior to Aledade, Travis was a regional director at CMS. He earned his MPH and MBA from the University of Alabama at Birmingham.
This article is co-written with Britainy Barnes, policy analyst, Aledade.

Small businesses across the country are trying to navigate federal loan applications in the midst of the greatest economic crisis in at least a generation. Often, they are doing so with very little guidance on how to adhere to the terms and conditions, and how best to protect themselves from failing future audits. The administrative burden on these small business owners weighs heavily, especially as they adapt to the new reality of commerce during a pandemic. Fortunately,  many of these small business owners have had additional time to devote to understanding these applications, since they’ve had limited operations during the public health emergency.

One crucial segment of the nation’s small business community is directly fighting COVID-19 and administrative burden at the same time—small, independent physician practices.

At Aledade, we have been working with more than 500 independent and small primary care practices across the country as they navigate these loans and grant programs. Their experience has taught us a few lessons. We have learned that even well-intentioned programs present unexpected difficulties for smaller practices. Sometimes these issues have been addressed in later modifications. Most of the time these changes came too late, after practices had already wasted extensive time deciphering program rules. Any new program should similarly assume that it will disfavor small businesses without an army of accountants, lawyers, and policy experts—unless explicitly designed with the intent of minimizing administrative burden.

When the rest of the world slowed down, health care providers stepped up to ensure the safety of their patients. Thirty-four percent of providers reported working more hours during evenings and weekends now than before the start of the pandemic. These health care heroes have spent long hours and late nights caring for their patients in spite of the uncertainty their businesses face. And that uncertainty cannot be overstated. Many practices have seen revenue drop by 50% to 60% over the past few months.

Primary care providers are putting in this extra time because they are often a patient’s first and most personal connection to the rest of the health care system. Yet the simple, stark fact of a fee-for-service health care system is that this extra work does not translate into extra revenue. Under the current payment system, performing procedures and ancillary services is more profitable than talking to patients and evaluating and managing their conditions.

COVID-19 caused the postponement of all elective procedures. This, coupled with patients’ fear of leaving their homes even when they need care, left providers with large gaps in the services they provided.

For safety reasons, telehealth and telephone visits have replaced in-person visits while simultaneously adding administrative burden. Patients are often confused at the beginning and end of these visits—from technical difficulties and a lack of familiarity with virtual platforms, to receiving unexpected co-insurance bills for a call to their provider. The providers are often caught in a confusing situation themselves. CMS has been making continual, well-intentioned changes to their telehealth policies as have private payers. Each change is both an improvement and a burden. The physician has to stop seeing patients, process the change and determine what to do. Because CMS made many of these changes retroactive, providers don’t know whether their claims will be paid or whether they have to resubmit them. All of these questions and issues are just for Medicare patients. Providers then also have to figure out how to correctly bill telehealth for private payers amidst a kaleidoscope of everchanging guidance.

Why Financial Aid is Costly

Despite the mostly positive changes in telehealth payment, expansion of the Paycheck Protection Program, and the Provider Relief Fund General Distribution from HHS, we at Aledade have heard from many physicians that they are taking significant pay cuts or foregoing their salary altogether.

Generally, they’re doing this for 1 of 2 reasons. The first is that the funding they received wasn’t enough and they have to make up the difference. The second is that it’s simply easier for them to take these cuts and hope it’s enough to survive this crisis than it is to carve out time between patients, take off their mask and face shield and gown and gloves (assuming they were able to secure PPE), sit down with their practice manager, figure out what documentation each program requires, gather all the required documents, apply, and then make sure that once they’ve received the money it is only being used for approved expenses. Often, they have to track every detail of what this funding is spent on in preparation for a report that they will have to produce in a month, while having  no idea what that report will ask.

In general, these providers are very fearful that—even as they are taking time away from their patients to interpret laws and regulations—if they unintentionally fail to comply with even one of the various conditions or requirements, an audit or knock on the door from the FBI could be in their future.

Take for example the Paycheck Protection Program. We followed that program very closely, from the moment we heard it would be available in early April. We put together instructions informing our partner practices how to apply and what documents they would need in preparation for April 3, 2020, when banks would begin accepting applications.

In spite of all this, few of Aledade’s partner practices were able to secure funding before the first round of PPP ran out of funds. We received emails from many of these practice owners telling us that their bank wasn’t accepting applications. Some said they weren’t being prioritized because they didn’t have the right kind of account. All we could offer was a choice—wait and be patient, or try another bank.

When the program was refunded, we made sure to inform practices of this again. Thankfully, most of them were able to secure a loan. It still wasn’t easy. In some cases, it meant they left the bank they had been doing business with for years for another bank that was accepting applications from new customers.

Then the worries increased. After securing a loan, practices told us of their concerns about getting audited and the inspector seeing they had also received funds from the Provider Relief Fund and/or a Medicare Accelerated Payment (another loan which is not eligible for forgiveness).

The scale of these practices is crucial context. We’re talking about small practices, typically with fewer than 10 providers and little in savings. These are practices that are working in one of the lowest-paid specialties on razor-thin margins. They were being asked to compete against, and fulfill the same regulatory obligations as, huge organizations with hundreds of employees, finance and accounting departments, and many more resources. It was only when the Treasury Department announced its safe harbor exception for businesses that received less than $2 million dollars that practices sighed with relief. That was one less administrative burden they had to worry about. 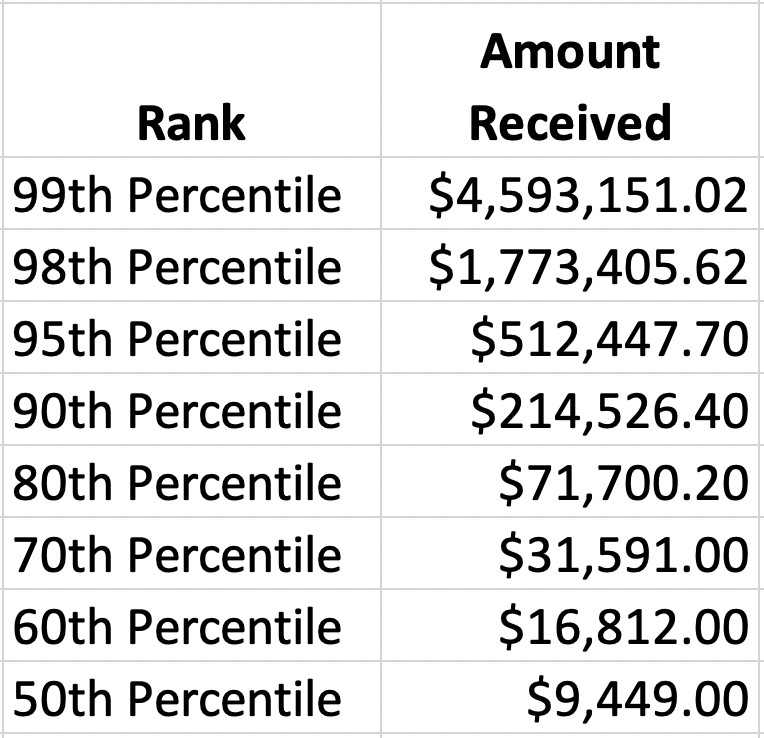 HHS should implement a similar exception for the money it is disbursing through the Provider Relief Fund’s General Allocation. Any provider that receives less than $1 million from the Provider Relief Fund should be exempt from any reporting requirements or future audits on these funds (TABLE). If the Treasury Department can extend a safe-harbor to over 98% of PPP applicants, why can’t HHS do the same for its eligible health care providers?

Another option that would provide the largest amount of much needed relief to small practices would be to raise the amount at which HHS requires providers to submit quarterly reports to the Secretary. Currently, this level is set at $150,000. The type of accounting needed to track which revenue dollar was spent on which cost item is rarely seen in our practices. They do not have full time accountants. That $150,001 does not go very far if it requires a practice to overhaul its accounting system. The average amount received by providers is $247,248. In other words, it’s a few places that are getting most of the money. By only requiring quarterly reports from providers who received more than $1 million, HHS can target the places that have the capacity to produce these reports. 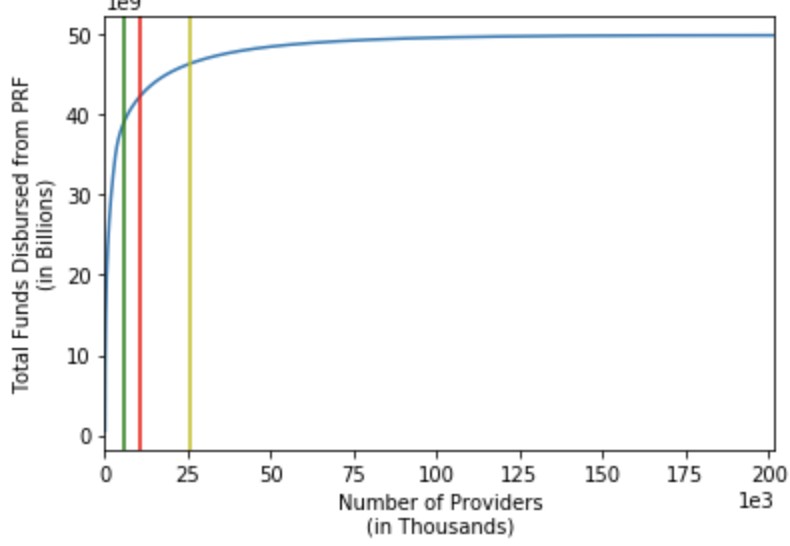 Considering the $50 billion that has been distributed as a power distribution, where a few providers received most of the money, HHS’s $150,000 limit is unduly burdening small practices. The graph (FIGURE) shows that by increasing the amount at which providers must submit quarterly reports to $1 million, 78% of the money continues to be accounted for while removing the burden for over 10,000 providers.

Below is just a sampling of questions we received. All these gritty questions take time and energy away from the practice of medicine and usually result is spending stimulus money on consulting services to figure out how to spend the stimulus money. HHS should increase its communication with providers. After providers received the first round of funding in April, HHS sent an email informing them of next steps (attest to the Terms and Conditions and confirm receipt of the funds). But that was the extent of their communications with providers. A practice in Pennsylvania told us, “Had it not been for the communication we’ve received from you [Aledade], we would not have had any idea that there was an application for a second round of funds.”

Similarly, there was no direct communication to providers regarding the June 3rd deadline that they had to submit revenue information in order to be considered for an additional payment. Finally, most practices that have called the CARES Hotline have been unable to get an update on the status of their application. HHS has made them wait over 4 weeks. Four weeks in which they have been awaiting a decision that will dictate whether they are able to keep their doors open for a few more weeks or not.