Workplace Wellness Can Be Hazardous to Your Health

Al Lewis, JD
Al Lewis wears multiple hats, both professionally and also to cover his bald spot. As founder of Quizzify, he has married his extensive background in trivia with his 30 years experience in healthcare to create an engaging, educational, fully guaranteed and validated, question-and-answer game to teach employees how to spend their money and your money wisely. As an author, his critically acclaimed category-bestselling Why Nobody Believes the Numbers, exposing the innumeracy of the wellness field, was named healthcare book of the year in Forbes. As a consultant, he is widely acclaimed for his expertise in population health outcomes, and is credited by search engines with inventing disease management. As a validator of outcomes, he consults to the Validation Institute, part of an Intel-GE joint venture.
Crash-Dieting Risks
It’s fairly well-established (though not proven) that weight cycling, aka yo-yo dieting, is likely to be harmful. However, what is certainly harmful is companies paying people large sums of money to binge before the initial weigh-in and then crash diet until the subsequent one. There is a blog posting devoted to the topic, starting with a cigarette label-type warning:
Frankly, this is really a bad idea, as it can create all kinds of bad habits and damaging activities by the participants, as they starve, dehydrate, and supplement themselves in an effort to win. On the other hand, winning can make you feel GREAT! So, let’s go over some strategies to help you win!

This is not a hypothetical. A large chunk of the oilfield services industry “competes” to see who can binge the most and then crash diet the most. Schlumberger publishes its contest, with updates, every year. The amount of weight lost by the winning teams far exceeds the rate of healthy weight loss recommended by the CDC.

Flouting of Clinical Guidelines
The United States Preventive Services Task Force (USPSTF) and Choosing Wisely provide guidance on when to start screening, how often to get screened, and for what blood values. The rates are designed to balance false positives against true positives, and also to consider the potential for harm and remediating the harm in an undiagnosed condition.

Only blood pressure is recommended as an “A” annually for everyone. Other blood values are recommended far less frequently, starting at age 35 for males and age 45 for females. Some values, like glucose, are recommended to be done more frequently on certain people than others. All this assumes that a physician or other licensed, educated, qualified health professional is conducting the screens.

By contrast, wellness vendors are not licensed, regulated, or supervised by any government authority. They are not only allowed to flout guidelines, but, indeed, it is part of their business model:

Hyperdiagnosis
While overdiagnosis is the observed and somewhat inevitable byproduct of the good-faith attempt to diagnose a condition, the term “hyperdiagnosis” is the deliberate, often breathless, reporting of large numbers of allegedly sick employees. To continue with the Nebraska example, the program sponsors announced that they had made “life-saving, cost-saving catches” of 514 cases of cancer, among perhaps 3000 employees who were screened (the exact number of screened employees has not been forthcoming). This epidemiologically impossible figure was touted as one of the program’s successes. In reality, virtually all of these people were falsely informed they had cancer, presumably triggering all the financial and emotional harms and consequences one would expect. (Later, the state program’s vendor admitted that these employees should not have been told they had cancer.)

While there are many others, Interactive Health is the leading practitioner of hyperdiagnosis. Lacking (or, worse, having) an understanding of the math of false positives, it wants to test everyone in an organization, and then send 45% of employees to the doctor. 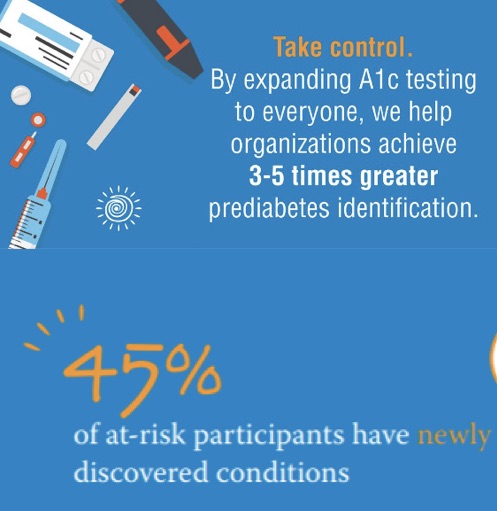 What Interactive Health fails to understand is the rate of false positives. To use a hypothetical example: a test that is 90% accurate for detecting a hidden disease that 1 in 1000 people have will produce a false positive rate of 99%. Here’s the arithmetic: 100 people will test positive—the 90% accurate test is also 10% inaccurate—but only 1 of those 100 will have the condition.

That’s why it costs $1 million dollars to prevent a heart attack, and that’s why Interactive Health keeps finding employees with “newly discovered conditions.”