Several professional societies have published guidelines for preconception and prenatal carrier screening.1,2,3 These recommendations are based on ancestry and personal history. This article discusses the limitations of current carrier screening guidelines and the evolving technologies of expanded genetic carrier screening, which can be offered regardless of race or ethnicity.

There are limitations associated with condition-directed carrier screening, including that it relies on accurate ascertainment of the patient’s family history and ancestry.4 Some of these limitations include:

One approach used to detect mutations in expanded carrier screening panels is a “full-exon sequencing strategy.”18 With this approach, next-generation sequencing (NGS) is used to assess bases across protein-coding regions known as exons, along with other noncoding regions which have acknowledged contributions to disease pathogenesis.18 This sequencing method can probe thousands of bases per gene and can identify all common variants in addition to rare novel variants. Because full-exon sequencing may uncover novel variants, this strategy requires novel-variant curation, a process used to interpret the clinical impact of observed variants.18

Some strategies bypass the need for novel-variant curation by restricting interrogation to a set of known and predefined pathogenic variants, usually only between 1 to 50 variants per gene. This strategy is called “targeted genotyping.”18 Polymerase chain reaction, microarrays, and NGS can be used in targeted genotyping.18 The smaller assayed regions and lack of novel variant interpretation requirements make targeted genotyping relatively inexpensive. However, it has lower detection rates than full-exon sequencing.18 These lower detection rates may eventually lead to an increase in overall healthcare spending because of the cost of care for unknown affected pregnancies.18,19 Given the challenges of achieving both high sensitivity and high specificity in a low-labor process, careful selection of variants is essential.

The Centers for Disease Control and Prevention established the ACCE framework as a process to evaluate genetic testing.20 ACCE derives its name from the 4 criteria for assessing a genetic test: To optimize these 4 criteria, experts have proposed that expanded carrier screening panels should be designed with the following considerations:18 Sensitivity, specificity, and predictive values are important determinants of analytical and clinical validity. 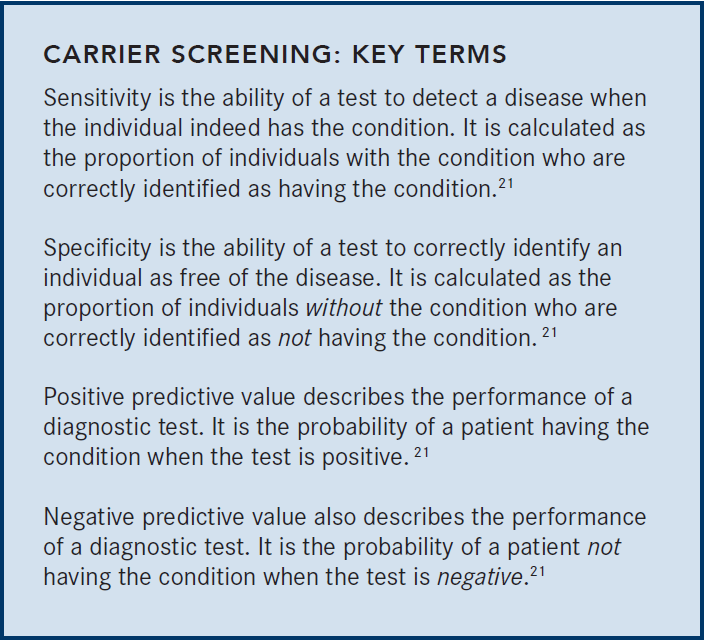 Analytical validity means that a test can predict the presence or absence of a genetic mutant.22

ACMG and the College of American Pathologists have published recommendations on the necessary performance parameters of genetic testing using NGS technology. In particular, these organizations recommend measuring analytical sensitivity, specificity, accuracy, precision, and reproducibility of an NGS-based test.23,24 Expanded carrier screening panels with greater than 99.99% analytical sensitivity, specificity, and accuracy and greater than 99.9% inter- and intra-assay reproducibility are commercially available.25