Last fall, when the journal Diabetes Care published results of a large “pragmatic randomized trial” that measured how well a basic telephone intervention worked to promote medication adherence, the results on their face appeared bleak.

In the study, 2378 adults were selected to receive a new class of medication for treating elevated levels of glycated hemoglobin (A1C) ≥8% (64 mmol/mol), blood pressure ≥140/90 mmHg, or low-density lipoprotein (LDL) cholesterol ≥100 mg/dL. They were assigned randomly to intervention and usual care groups. Everyone in the first group received 1 scripted phone call from a diabetes educator or clinical pharmacist to gauge how many had picked up a new prescription the first time, picked up subsequent prescriptions in a 3-month period, and achieved improvements in blood pressure, A1C, and LDL cholesterol levels.1

Researchers found the outreach effort made no difference in overall adherence, in medication persistence, or in intermediate health outcomes. But rather than be disappointed with these results, lead author Patrick J. O’Connor, MD, MA, MPH, and senior clinical investigator for HealthPartners, now knows where the healthcare system or accountable care organizations (ACOs) should not direct resources. When the patients who were receiving the intervention were contacted 2 to 3 weeks after getting their prescription, “80% of them had already filled it,” he said in an interview with Evidence-Based Diabetes Management, leaving only 20% who could potentially be affected by the outreach. Based on the results, O’Connor said, it makes little sense to “burn your money to make calls to everybody with a prescription.”

Instead, he compared results of his study with those of Derose and colleagues published in early 2013. That study, published in the Journal of the American Medical Association Internal Medicine, reported an effort by Kaiser Permanente Southern California to target only those patients who had not filled a statin prescription, using automated phone calls and follow-up letters.2 The study found that 42.3% of patients receiving the intervention filled their statin within 2 weeks, compared with only 26% of patients in a control group.2

O’Connor said comparing the 2 sets of data shows that having access to real-time data and the ability to use it to target only those patients who have not picked up their prescriptions makes all the difference in a successful effort to improve medication adherence. Despite their different results, authors of both studies agreed on their point. “There’s an important lesson here,” O’Connor told EBDM. Broad-based outreach is probably not cost-effective unless health plans and pharmacies can integrate information systems to the point that those designing outreach programs can target patients who are considered “the late fillers.” Fill data, he noted, comes from the claims data and the electronic medical record. An integrated system like Kaiser’s, he said, is likely still the exception. “When health information exchanges are fully operative and in place, you can integrate claims data with the prescribing data,” he said. “You have to be pretty close to real time for this to work.”

On the plus side, O’Connor said, Derose and colleagues found that automated phone calls were fairly effective, which suggested that if the investment is made to integrate the real-time claims data with the outreach, the cost of making the outreach itself can be controlled.

Medication adherence is a huge challenge in diabetes care, O’Connor said, and one reason is the sheer number of pills that some patients end up taking after a while. Research is starting to address this phenomenon, he added, which is likely to become a bigger issue with the emergence of guidelines that reward or punish ACOs based on how well their patients do in achieving clinical targets for diabetes.

Depending on the patient, O’Connor said, it may not make sense to pile on more medicine if 1 target is just a little off, if it means more side effects and costs for a patient who is otherwise making progress. Rather, it’s best to focus on the target that presents the most risk—and which will offer the patient the greatest benefit if he or she can make improvement. O’Connor called this the principle of “minimally disruptive medicine,” which he said has gained notice in recent years. Two recent qualitative studies involving this concept interviewed dozens of patients with multiple chronic conditions, seeking to understand their challenges and build frameworks for improving their care.3,4

“Most patients (with diabetes) only have 1 or 2 things out of goal,” he said. Giving patients targets they can achieve is more likely to bring success, O’Connor added.

Download PDF: A Look Beyond Findings on Telephone Intervention Reveals Why Having Data Matters 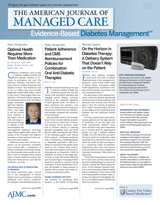