The utilization pattern of anticonvulsants after a change in preferred-formulary coverage resulted in health plan savings of $0.16 per member per month.

Anticonvulsant medications are commonly used for off-label indications. However, managed care organizations can restrict utilization of medication to indicated uses only.

To evaluate the pattern of off-label use of second-generation anticonvulsants after implementing a formulary change.

We did a retrospective analysis of an administrative pharmacy claims database for a managed care plan with more than 1 million members continuously enrolled during 2004-2005. The study evaluated off-label use and explored pharmacy utilization patterns (by physician specialty, region, plan type, age, sex, copayment) across the study population following the formulary change.

The off-label usage pattern varied for individual anticonvulsants in 2004 and 2005. Future considerations for controlling off-label use may include requiring prior authorization and provider education.

A formulary change assigning brand-name second-generation anticonvulsants to nonformulary status and making generic gabapentin the only preferred anticonvulsant was implemented in January 2005 by a managed care plan.

Anticonvulsants belong to a group of drugs that control or prevent convulsions.1 Newer second-generation anticonvulsant agents have a well-documented beneficial effect as adjunctive treatment for those who suffer from seizure disorders. Besides being approved by the US Food and Drug Administration (FDA) to treat epilepsy, topiramate is approved for migraine prophylaxis, gabapentin for posttherapetic neuralgia, and lamotrigine for the treatment of bipolar disorder. First-generation anticonvulsants such as valproic acid, carbamazepine, and phenytoin are effective, but require closer monitoring, are dosed more frequently, and have a more serious side-effect profile than second-generation drugs such as gabapentin, lamotrigine, and levetiracetam. After review of a pooled analysis of placebo-controlled clinical studies in which these drugs were used to treat epilepsy as well as psychiatric disorders and other conditions, the FDA required manufacturers to include warnings about suicide risk with the use of these anticonvulsants.2

The approved FDA labeling summarizes safety and efficacy data obtained from clinical trials. Neurontin is the brand-name version of gabapentin; generic gabapentin was made available in the United States as of November 2004. Once a drug is approved by the FDA, physicians may prescribe the drug for any indication, without regard for the specific indication that was the basis for the FDA approval.3 Such off-label prescribing often raises questions regarding patient safety and healthcare costs. Managed care, however, can restrict utilization of medication to indicated uses only.

Stafford recently defined off-label prescribing as “the prescription of a medication in a manner different from that approved by the FDA.”4 A 2003 report showed that off-label use in the United States accounted for approximately 21% of prescriptions.5 An analysis of office-based physician prescribing showed that almost 1 of every 5 prescriptions in the United States in 2001 was prescribed for off-label use.6 Anticonvulsants account for the highest rates of off-label use (74%), followed by antipsychotics (60%) and antibiotics (41%).4,5 In the Georgia Medicaid population in 1999-2000, 71% of anticonvulsant use was for off-label purposes.7 In 2001, 83% of gabapentin use was off-label.6

Following the availability of generic gabapentin in November 2004, a managed care plan with 1,036,345 members implemented a formulary change in January 2005, assigning second-generation anticonvulsants to nonformulary status and making generic gabapentin the only preferred anticonvulsant drug (). All members had a 3-tier benefit. Most typical copayments (±$5) were $10 (tier 1), $25 (tier 2), and $50 (tier 3). Copayments were not changed from 2004 to 2005 from a benefit perspective. The plan had a mandatory generic benefit design; therefore, members had to pay an ancillary charge to obtain Neurontin.

The primary objective of the present study was to evaluate the pattern of off-label use after the formulary change. To explore the variation in utilization after the change in pharmacy benefit design (a third-tier copayment for second-generation anticonvulsants, Figure 1), the secondary objective of this study was to explore the utilization pattern and costs of second-generation anticonvulsants after the formulary change.

This study was a retrospective analysis using medical and pharmacy claims data from a large, national, managed care health plan of approximately 1 million commercially insured members with pharmacy benefits. The plan members were evenly distributed with a male to female ratio of 1:1. For the study, patients were selected who had at least 1 second-generation anticonvulsant pharmacy claim (topiramate, zonisamide, lamotrigine, gabapentin, tiagabine, or levetiracetam) during the study period (Figure 1). Pharmacy and medical claims were matched during the given year. Members with an anticonvulsant prescription were matched to their medical claims by International Classification of Diseases, Ninth Revision (ICD-9) codes and separated by labeled versus off-labeled indications. Those members who had an ICD-9 code for a labeled indication were grouped as “labeled” users. These patients had to be continuously enrolled from January 1, 2004, through December 31, 2005; there were no age criteria in patient selection.

Pharmacy claims data for this cohort were matched to medical claims data using unique member identification numbers. The medical claims data contained ICD-9, diagnosis (primary, secondary, and tertiary) codes of predetermined indicated and off-labeled uses. Labeled indications were derived from the product prescribing information. Off-label uses were obtained from the Micromedex Healthcare series database and abstracts of the Cochrane Collaborative Systemic Review.8,9 Key words used in the Cochrane Review search included [second generation anticonvulsants], [off-label use], [anti-epileptics], [gabapentin], [pain], [neuropathy], and [labeled indications]. These ICD-9 diagnosis codes for off-label uses were grouped into 7 categories, which included bipolar disorder, migraines, neuropathy, other mental disorders, other neurologic disorders, other pain, and miscellaneous. The Appendix lists all ICD-9 codes used to recognize off-label indications during the data extraction. Because topiramate has a migraine indication and lamotrigine has a bipolar disorder indication, those indications were not recorded as off-label uses. Physician specialty was identified as the primary description in the database of contracted providers with the plan. Noncontracted physicians whose information was not loaded into the database defaulted to the “other” category.

Descriptive analyses for all variables were conducted for all study variables. The measured characteristics included age (at the beginning of the study), sex, and physician specialty. Patients’ baseline characteristics were identified from prescriptions filled during the year prior to implementing the benefit change (calendar year 2004). Bivariate comparisons of preimplementation versus postimplementation of the formulary change were conducted with t tests for continuous variables and χ2 tests for categorical variables. All statistical tests were considered significant at P <.05. All analyses for this study were conducted using SPSS version 11.0 (SPSS, Chicago, IL). Drug costs were measured as average wholesale price obtained from First Data Bank in February 200610; exact pharmacy claim costs were not used due to proprietary information held by the plan.

Off-label use of individual anticonvulsants varied (P <.050) after the change in preferred-formulary coverage (). Generic gabapentin utilization increased (11.5% to 68.0%), whereas topiramate utilization decreased (16.2% to 12.5%). Detailed utilization rates for each anticonvulsants are given in Table 2. Primary care providers accounted for 41.3% of the pharmacy claims for generation anticonvulsants for off-label uses versus 9.4% for neurologists, 2.8% for psychiatrists, and 46.5% for other specialty (Table 2). Only psychiatrists’ prescribing pattern changed with the formulary change during the study period (P = .001, Table 2). Most of these off-label uses were for pain other than neuropathy (22%) and for a miscellaneous category that included symptoms of involuntary movement, malnutrition, or injuries. Use of these agents to treat migraines decreased nonsignificantly between 2004 and 2005. Bipolar disorder—related off-label use decreased significantly from 2004 to 2005 (6.3% to 3.6%; P <.001). This study considered the use of topiramate for migraine prophylaxis, gabapentin for postherpetic neuralgia, and lamotrigine for bipolar disorder as labeled indications because these medications were FDA approved for those uses.

We found that more than 80% of anticonvulsant prescriptions were for off-label purposes. Most of these uses were for pain, neuropathic pain, and other mental and neurologic disorders, which is consistent with the study of off-label anticonvulsant use in the Georgia Medicaid population.8 Several studies reported that 71% to 74% of these anticonvulsants claims were being used for off-label indications.3,4,7,11 Since this study, there have been regulatory changes that allow off-label promotion to physicians. Allowing promotion of drugs for off-label uses without evidence to support their safety and efficacy for these purposes may lead to additional costs and unknown outcomes.12

In this study population, gabapentin was utilized most frequently for off-label purposes (70.1%) compared with levetiracetam (3.1%), tiagabine (2.5%), and zonisamide (2.0%) (Table 2). The 2005 change in gabapentin utilization was probably due to the availability of gabapentin at the lowest-tier copayment (standard generic copayment of $10 per prescription) in 2005. Gabapentin became available in a generic form in November 2004. More investigation is needed to examine the reason of this utilization pattern.

The study results show a significant decrease in the plan’s PMPM cost from 2004 to 2005, which may be due to the change in the benefit structure (Table 3) for the secondgeneration anticonvulsants. The decrease in cost to the plan was attributable to the availability of generic gabapentin in late 2004, thereby saving the plan $0.16 PMPM (Table 3).

First, our study was a retrospective analysis without a control group, which prevents determination of a causal relationship between the change in benefit and the change in prescribing patterns. Second, the long-term impact of the formulary change on prescribing patterns may not be reflected in the short duration (1 year) of the study period. Third, this study did not address several outcomes that could potentially have been affected by the change in copayment, including discontinuation, medication possession ratios, and use of anticonvulsants for labeled indications such as epilepsy. Fourth, felbamate (Felbatol) and oxcarbazepine (Trileptal) were not included in this study. Fifth, although each member was counted only once as having anticonvulsants, they may or may not have had more than 1 anticonvulsant. Sixth, the exact pharmacy claim costs were not used in this study because of proprietary information held by the plan.

A change in pharmacy drug formulary status to require a third-tier copayment for second-generation anticonvulsants appeared to have no effect on off-label use in this population overall; however, utilization patterns varied among individual anticonvulsants because of this formulary change. A cost saving of $0.16 PMPM was attributable to the availability of generic gabapentin in late 2004. Future considerations for controlling off-label utilization in managed care organizations may include requiring prior authorizations, and provider education and guidance. This study addressed a need for the management of a medication class that has generally been left unmanaged. Further studies on the cost of adverse effects from the utilization of off-label medications should be done.

Funding Source: This project was conducted as part of a residency program funded by Abbott Laboratories through the University of Missouri—Kansas City.

Author Disclosures: The authors (HP, DCT, SB, RSR) report no relationship or financial interest with any entity that would pose a conflict of interest with the subject matter of this article. 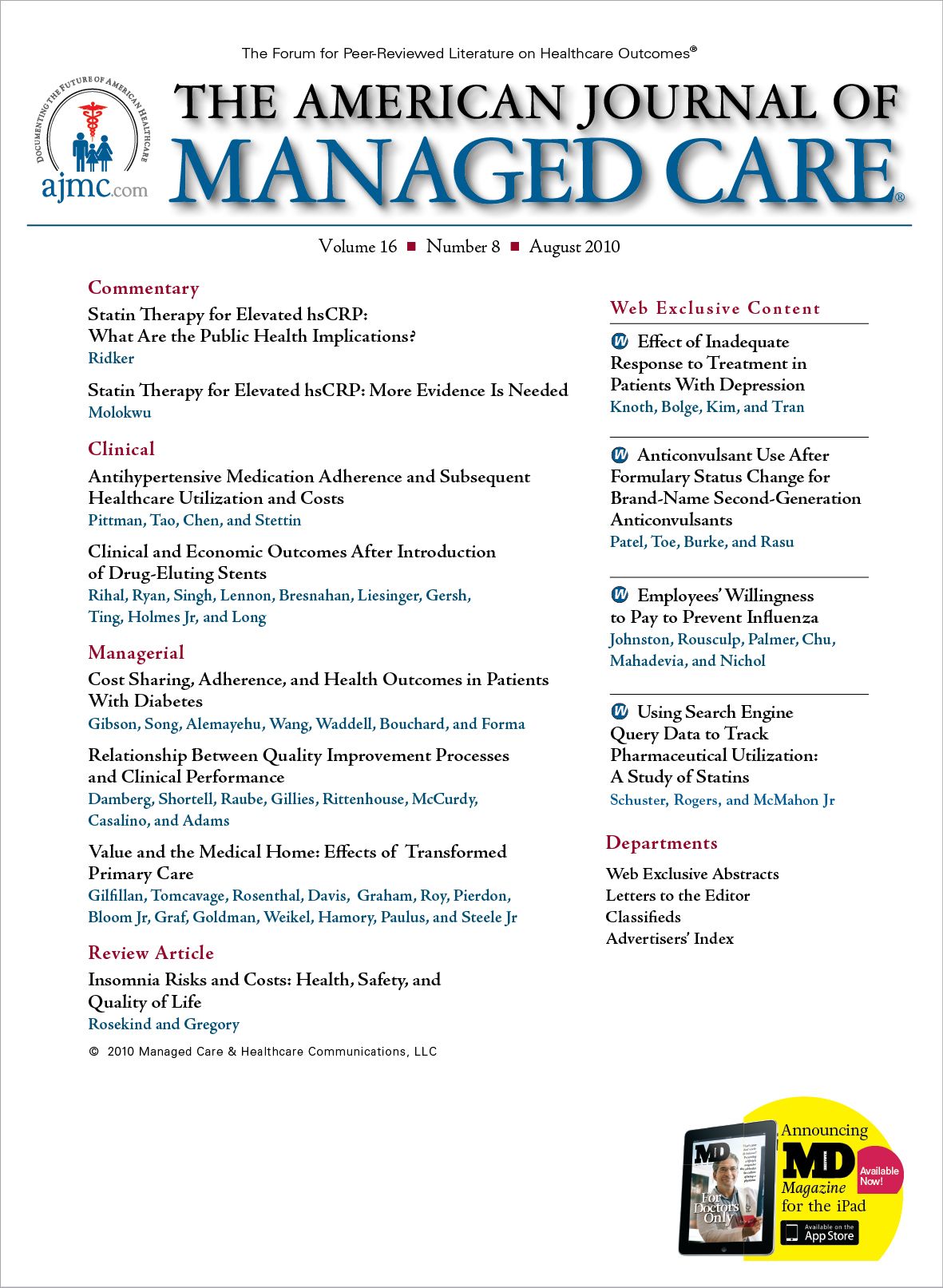