Although the fundamental structure of Medicare Part D remained the same in 2010, the beneficiary provisions continued to improve.

: Medicare Part D has changed since its inception in 2006, with some changes defined by statute and others resulting from guidance issued by the Centers for Medicare & Medicaid Services (CMS). This article describes and catalogs the changes for 2010.

: To review changes to the benefit for 2010 and interpret these changes and provide implications for plan sponsors, pharmacists, beneficiaries, and pharmaceutical companies.

: We reviewed policy statements and other communications from the CMS released between January 1, 2009, and November 30, 2009, as well as any related Medicare Part D publications.

: The year 2010 represents a year of favorable changes to Medicare Part D for beneficiaries. Although some patients will still face the coverage gap in the coming year, the trend toward a more robust benefit with enhanced patient protections continues.

2010 will be another year of refinement for the Medicare Part D program with several enhancements benefiting enrollees.

The Medicare Prescription Drug Benefit, known as Medicare Part D, is a voluntary insurance program that provides coverage for prescription medications for people who are eligible for Medicare Part A or Part B. Medicare Part D has changed since its inception in 2006, with some changes defined by statute and others resulting from guidance issued by the Centers for Medicare & Medicaid Services (CMS). The year 2010 brings another round of changes, some of them significant, to Medicare Part D. The purpose of this article is to describe relevant changes to Medicare Part D in 2010 and the implications for plan sponsors, pharmacists, beneficiaries, and pharmaceutical companies. Previous articles addressed changes in years 2007 through 2009.1-3

How Did the Coverage Thresholds for the Standard Part D Benefit Change in 2010?

Implications. In 2010, the higher costs of the standard drug benefit and premiums will place a greater financial burden on beneficiaries. Plan sponsors will need to be attentive to the higher cost of administering Part D and the increases in pharmaceutical prices. Beneficiaries will continue to observe efforts by the plans to manage costs by encouraging generic dispensing of medications, and implementing utilization controls such as prior authorization and step therapy. Pharmaceutical companies may oppose plans’ efforts to restrict access or increase cost sharing because any of these strategies may lead to reduced adherence or unfilled prescriptions. It will be important for the success of the benefit to maintain the balance between beneficiaries’ cost sharing and their access to medications so that all stakeholders’ needs are being met.

How Has the Definition of “Negotiated Price” Changed for 2010?

Implications. This move toward greater transparency in negotiated pricing has been anticipated by plan sponsors for several years. Plan sponsors will now be required to count the “spread” captured by their PBM. The spread is the difference paid to the PBM by the plan sponsor and what the PBM actually pays the pharmacy, and is reported as administrative costs rather than drug costs. Although plan sponsors will now know exactly how much their PBMs are marking up their reimbursements for prescription claims, this new method may impact the plan sponsor’s risk corridor payments from CMS and delay the time it takes beneficiaries to reach the doughnut hole, putting plan sponsors at greater financial risk. Beneficiaries, however, will benefit from lower prices at the pharmacy counter and the potential delay in the time it takes for them to reach the coverage gap.

What Are the Changes to Utilization Management Criteria in 2010?

The most significant changes to utilization management criteria in 2010 will be around off-label use requirements and overly burdensome criteria. CMS has specified that plans will no longer be able to require the trial and failure of medications for a condition for which they do not have US Food and Drug Administration (FDA) approval before allowing a patient to receive a medication that does have FDA approval for the condition. There is a caveat to this new rule stipulating that plans may require patients to try a medication for an off-label indication first only if it is supported by widely used treatment guidelines or clinical literature that CMS considers to represent best practices.

Implications. These rule changes will limit the amount of control plan sponsors have on trying to shift patients to lower-cost generics. Because plan sponsors are at financial risk, it is advantageous for them to have their members on medications that cost as little as possible. Some (although not all) plan sponsors often take a cost-minimization approach rather than a cost-effectiveness approach. As a result, some sponsors have required trial and failure of medications that do not always have the long-term durability and safety information demonstrated by an FDA approval, even though these medications may have been used in clinical practice to treat certain conditions. CMS has made these utilization management criteria revisions for 2010 to help ensure that Part D beneficiaries receive appropriate evidence-based medicine and decrease the number of steps they must go through prior to receiving treatment.

For a drug to be reimbursed by CMS, it must have a properly listed National Drug Code (NDC) with the FDA. A nonmatched NDC list was constructed by comparing the list of NDCs included in the CMS database with those included in the FDA NDC directory. Beginning January 1, 2010, CMS will use this list to reject PDEs that are submitted with a nonmatched NDC. If the prescription claim was processed for an NDC on the nonmatched list, then that claim will encounter the new PDE edit and be rejected by CMS, and the plan sponsor will not be reimbursed for that claim.11

Implications. It was the intent of CMS to have manufacturers properly list their impacted NDCs with the FDA prior to January 1, 2010, to limit any potential impact. Should these NDCs not be properly listed, rejections will occur at point of sale and lead to patient disruption. Proper communication with and education of pharmacies by plan sponsors and PBMs will help to alleviate confusion and help to identify properly listed NDCs to be processed for Medicare beneficiaries. Generic manufacturers, repackagers, and labelers with NDCs on the nonmatched list will need to determine whether a proper listing at the FDA for their product(s) is necessary. Wholesalers and pharmacies will need to justify stocking nonmatched NDCs as these drugs may not be covered by participating Part D plan sponsors. Pressure will be put on plan sponsors and PBMs to call for these actions to prevent confusion in their beneficiary population.

How Has the Design of Medication Therapy Management Programs Changed for 2010?

In the 2010 Call Letter, CMS mandated several changes to medication therapy management (MTM) programs.6 In 2010, those plan sponsors with an opt-in enrollment MTM program will be required to switch to an opt-out enrollment program for qualifying beneficiaries. Beneficiaries who meet the qualifying criteria, unless they explicitly state otherwise, will be automatically enrolled into MTM programs. Plan sponsors will be required to target members at least quarterly during the benefit year rather than once yearly. Additionally, plan sponsors must target at least 4 of the 7 chronic condition categories identified by CMS. These categories are hypertension, heart failure, diabetes, dyslipidemia, respiratory failure, bone disease, and mental health. Plan sponsors may not require qualifying beneficiaries to have more than 3 of the 4 targeted chronic conditions and may not require qualifying beneficiaries to be receiving more than 8 Part D drugs. Furthermore, the threshold for the annual cost of Part D drugs the beneficiary is likely to incur to be eligible for MTM services has been reduced from $4000 to $3000. CMS also announced minimum requirements for MTM services, and these services must target both beneficiary and provider. At a minimum, the MTM program must perform a comprehensive medical review, which is a comprehensive review of the beneficiary’s medications (both prescription and nonprescription drugs) done by a qualified provider or pharmacist, at least quarterly and the program must offer prescriber-targeted communications.

Implications. Reduced thresholds and opt-out enrollment methods will lead to a larger number of beneficiaries participating in MTM programs. The increased frequency of quarterly comprehensive medical reviews will increase the number of opportunities to impact outcomes and improve patient care. Program requirements and an increased mandate on beneficiary/prescriber interaction with the plan sponsor will lead to heightened demands on sponsors implementing these MTM programs. For 2010, plan sponsors will need to decide how to implement such programs, or if services will need to be contracted to an external MTM vendor. This provision will affect the bid process and premiums for 2010 as plan sponsors determine the financial impact of these MTM provisions on their Medicare business.

It is generally accepted that Medicare Part D is successful in providing access to prescription drug coverage for beneficiaries who otherwise lack coverage; however, gaps still remain. One of the most challenging aspects of Part D is the coverage gap, which impacts 25% of beneficiaries each year. In addition, some believe that offering a public option in Part D, in which the government negotiates drug prices directly with pharmaceutical companies, can help to reduce pharmaceutical spending.

The Patient Protection and Affordable Care Act of 2010, signed into law by President Obama on March 23, 2010, made many changes to Medicare Part D.12 One of the most important changes is the closure of the coverage gap, starting with a $250 rebate provided to Medicare beneficiaries who enter the coverage gap in 2010. The coinsurance rate in the coverage gap will be phased down starting in 2011 until it reaches 25% by 2020. Starting in 2011, all brand name drugs for beneficiaries in the coverage gap will be offered at a 50% discount. Other changes that will take effect in 2011 include discretionary rights for CMS to designate protected classes of drugs in Part D, changes to low-income benchmarks for plans eligible for low-income subsidy (LIS) enrollment, allowing plans to waive de minimis premiums to maintain LIS enrollment, providing formulary information to reassigned LIS beneficiaries, and free generic first drug fill option for Part D plans.

The year 2010 represents a year of favorable changes to Medicare Part D for beneficiaries. Although the standard drug benefit parameters and cost-sharing amounts underwent their annual increase, there was a move toward greater transparency in negotiated prices that may result in lower out-of-pocket costs to beneficiaries and a potential delay in entering the coverage gap. CMS mandated several changes to MTM programs to increase the number of beneficiaries enrolled and improve the services and quality of the programs. Although the fundamental structure of Medicare Part D remained the same in 2010, the beneficiary provisions continued to improve. It is anticipated with the advent of healthcare reform, Medicare Part D will continue to reach toward the goals of access to necessary medications and improved therapeutic outcomes for all Medicare beneficiaries.

Funding Source: The authors (RJD, JS, DCB) report no source of funding for the work represented in this article.

Author Disclosures: The authors (RJD, JS, DCB) report no relationship or financial interest with any entity that would pose a conflict of interest with the subject matter of this article. 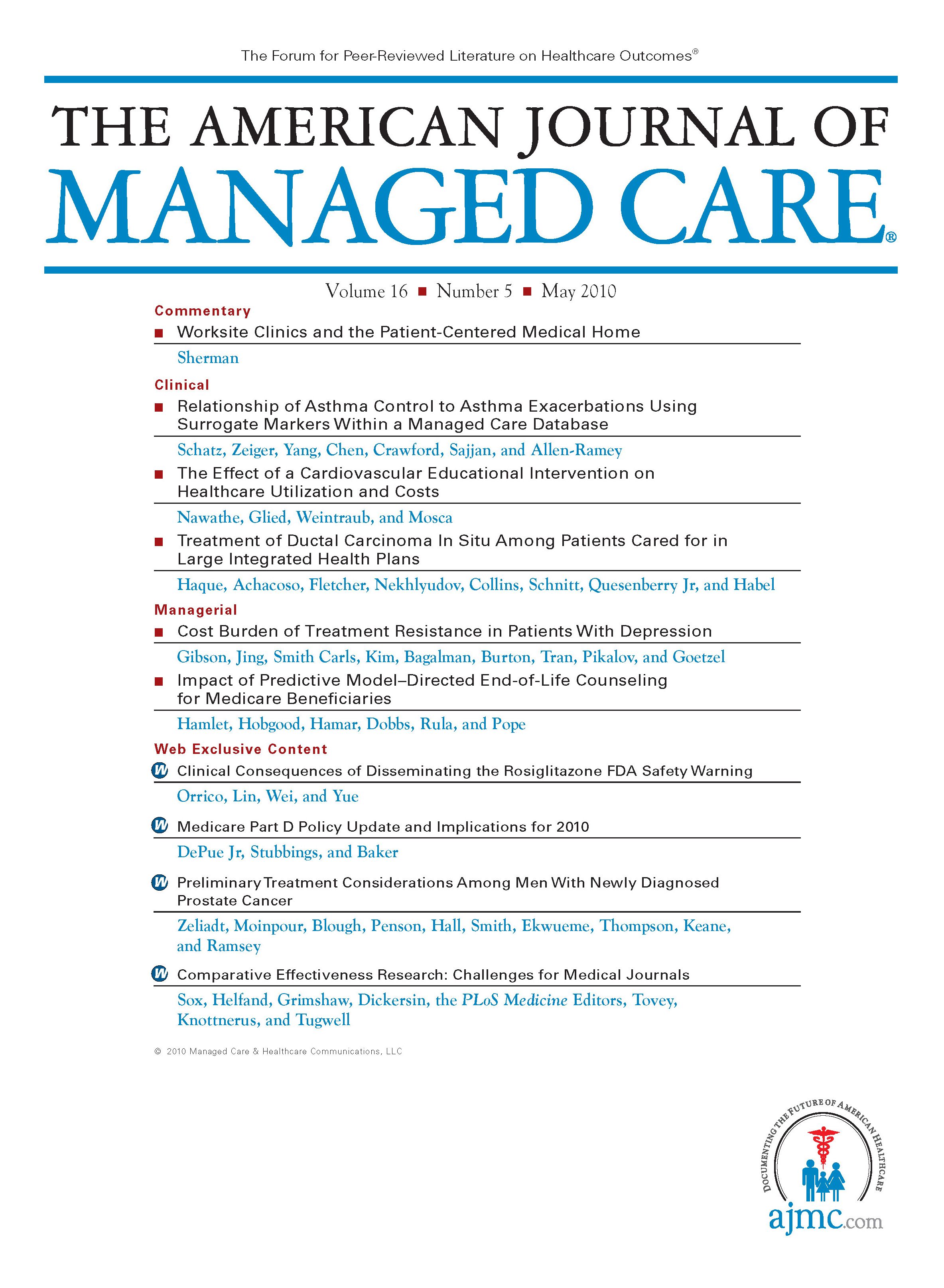