Discussions of High Costs for New Therapies Raise Questions About an Old One: Insulin

Robert A. Gabbay, MD, PhD, FACP, editor-in-chief of Evidence-Based Diabetes Management, discusses the complexities of the current debate over the cost of insulin.

In June , I had the opportunity to lead a symposium at the Scientific Sessions of the American Diabetes Association (ADA) called “Follow the Money—How Costs and Payments Impact Diabetes Care.” Much of the discussion involved new payment models, which can provoke lively debate on their own. But when the talk turned to the price of insulin, that’s when the sparks started to fly.

A speaker asserted that over the long term, the share of nonelderly who spend large shares of their income on insulin isn’t as large as it seems. But the endocrinologists were having none of it. As Irl Hirsch, MD, of the University of Washington warned earlier this year, the price of insulin and the increased talk about diabetic ketoacidosis are highly connected. During the bloom of the EpiPen saga this summer, Hirsch sounded the alarm that the crisis over insulin pricing is just as dire, even if it has unfolded more gradually.1,2

Work by Elbert Huang, MD, of the University of Chicago, along with researchers from the University of Michigan and the University of Melbourne in Australia, appeared in JAMA in April 2016. The researchers found that the price of insulin has more than tripled over the past decade, from $231 a year to $731 per patient. By contrast, costs for other medications, including those commonly used in type 2 diabetes (T2D), have stayed flat or declined

< To be sure, modern insulins offer superior control, often with less hypoglycemia and potentially less weight gain. But rising insulin costs have enormous implications; for those with type 1 disease, the hormone is needed to stay alive. We also know that if individuals with T2D live long enough, they likely all will need insulin therapy as a result of ongoing beta cell decline. But because of the cost, payers may resist reimbursing for insulin or other newer classes of diabetes therapy.

Who is to blame? As our colleagues who treat cancer and rare diseases have understood for years, nobody’s completely guilty, but nobody’s completely innocent either, which makes solutions challenging. An informative paper appeared last month in JAMA, by Aaron S. Kesselheim, MD, JD, MPH; Jerry Avorn, MD; and Ameet Sarpatwari, JD, PhD. It offers both a roadmap to how we arrived here and some solutions.4 In the short term, the authors say, solutions include rethinking our reward system for exclusivity rights for new drugs, giving government payers meaningful negotiating power, and doing more to get generics to the market. Providers and health systems are increasingly incentivized to ensure high-value healthcare, pharmaceutical companies are challenged with the high cost of bringing new drugs to market, payers (which obviously includes the federal government and therefore all of us) need to control healthcare spending.

Unfortunately, at the present, patients are caught in between. In diabetes care, we have many patients who are not at goal; there is clearly great unmet need. Therefore, we do need new treatment options. Our most recent ADA meeting also brought news about combinations of insulin and glucagon-like peptide-1 receptor agonists, which are discussed in this issue of Evidence-Based Diabetes Management. The FDA will likely act on these applications before the end of this year. The question is, will patients have access? There was a time when this idea would have seemed absurd, but those days are over.

It seems easy to blame payers. But when we see pharmaceutical companies set high prices—or raise prices on older drugs in ways that seem illogical&mdash;it’s not so straightforward. Today, new benefit designs reveal to consumers what drugs actually cost (which is a reason the EpiPen uproar happened, and why many believe insulin is next.) More and more Americans now have high deductible plans&mdash;up to 40% of those under age 65, according to a new report from the CDC.5

The downside, however, is that rising healthcare costs that were once spread among everyone through higher premiums are being borne directly by those with lifethreatening, chronic conditions who need life-sustaining medications. Some with diabetes who for years were unable to gain coverage finally did so under the Affordable Care Act. But now, once again, they find themselves struggling each month to scrape together ever-increasing out-of-pocket costs for insulin—a drug discovered nearly a century ago. Dr Gabbay is the chief medical officer and senior vice president at Joslin Diabetes Center in Boston, Massachusetts.References

Download PDF: Discussions of High Costs for New Therapies Raise Questions About an Old One: Insulin 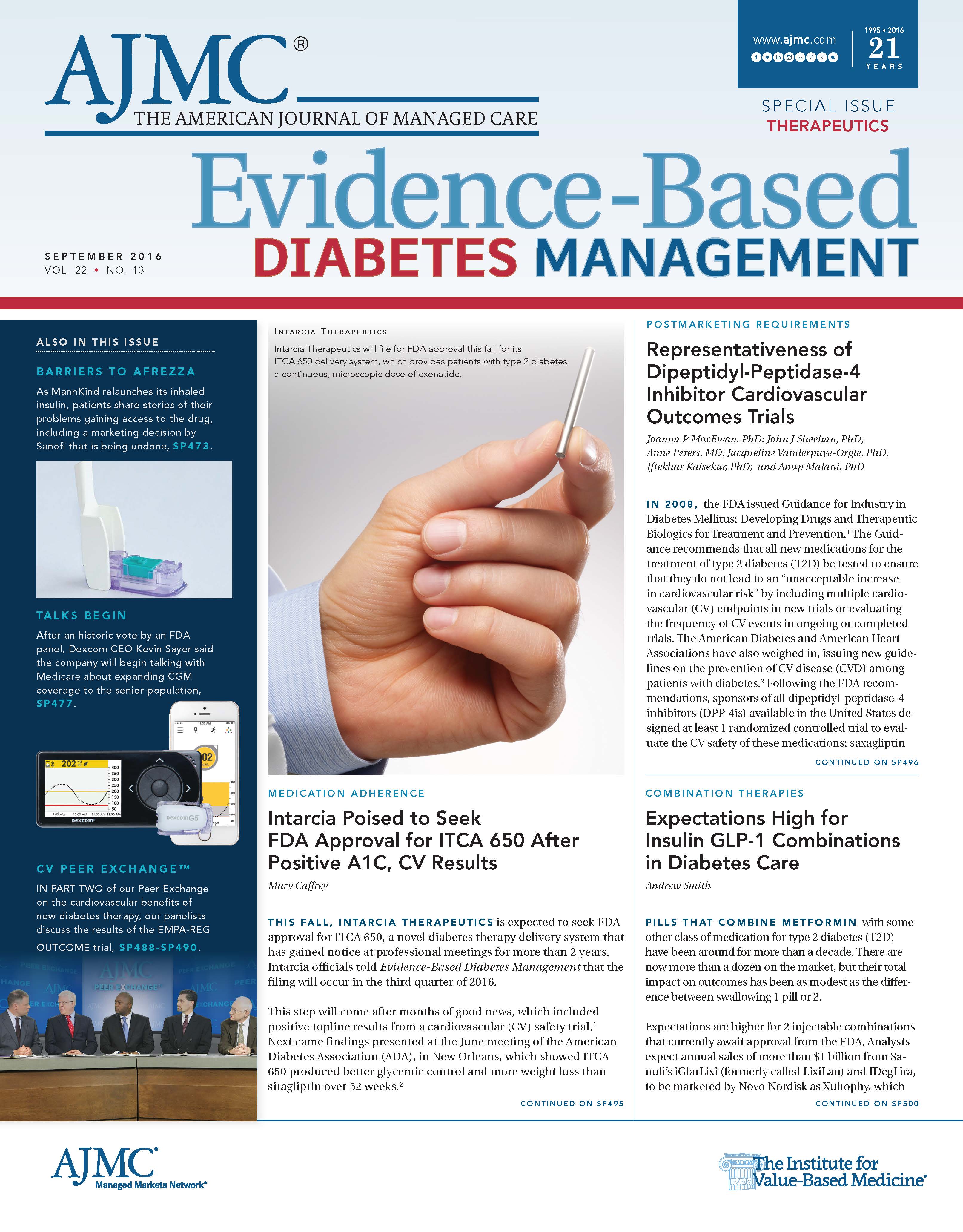