In this commentary, the authors argue for moving away from state-based medical licensure and describe policy, technological, and administrative changes necessary for implementing portable medical licensure.

By 2030, the United States could see a shortage of nearly 120,000 physicians.1 Telemedicine can alleviate the impacts of this shortage by helping physicians make use of unused time and see additional patients, allowing patients to access a larger pool of physicians and connecting specialists to hospitals in rural and medically underserved areas.2 Although telemedicine is growing in use and acceptance, state licensing laws create false geographic barriers and pose a significant challenge to widespread adoption.

In the United States, state medical boards regulate physician licensing, creating a patchwork of inconsistent state licensure laws. With few exceptions, physicians must acquire and maintain a license for each state in which they practice medicine. This antiquated system of state-based medical licensure, originally enacted in the 19th century to reduce medical malpractice and protect patient safety, has profound implications for the promise of telemedicine to increase access to care for vulnerable populations and mitigate the impacts of the national physician shortage.3 In this commentary, we argue for moving away from state-based medical licensure and describe policy, technological, and administrative changes necessary for moving toward portable medical licensure.

Physicians must be licensed in each state where current and future patients are located, so physicians practicing telemedicine across state borders may be responsible for obtaining and staying compliant with up to 51 different state practices of medicine at any given time. There are some exceptions—for example, 10 states issue special purpose licenses for physicians who wish to come to their state for a limited time, scope, and purpose, such as to demonstrate a new technique or to educate medical students.3 However, these exceptions are few and far between.

The multistate licensure process is long and expensive; some states require physicians to pay annual license renewal fees, complete additional coursework, submit required documentation, and participate in interviews. Even after physicians complete these requirements, state medical boards can take several months to process licensing applications.3 Along with imposing substantial direct costs on physicians, state-specific licensing reduces competition that could lower healthcare prices, limits opportunities for physicians to gain experience by seeing more patients, and exacerbates health disparities.4 The impact of restricting telemedicine falls hardest on poor patients, the uninsured, and those who rely on state Medicaid programs, many of whom lack access to reliable transportation and cannot travel across state lines to see specialists.5

Over the past decade, the Federation of State Medical Boards (FSMB), a national nonprofit organization that represents 70 state medical and osteopathic boards, has advanced several proposals to enhance license portability and reduce regulatory barriers to telemedicine. These include the Uniform Application and the Federation Credentials Verification Service, which are both web-based applications that eliminate the need for physicians to reenter identifying information and credentials when applying for multiple licenses. Most recently, the FSMB instituted the Interstate Medical Licensure Compact, an agreement to expedite the medical licensure process among member states. Physicians in good standing can freely practice in member states as long as they possess a “full and unrestricted” license in their state of principal license (SPL). To date, only 24 states have joined the compact.4

These proposals are a step in the right direction but far from the solution. They simply streamline—not eliminate&mdash;the process of applying for multiple medical licenses. Additionally, they do not reduce the cost to doctors of maintaining multiple medical licenses, estimated at $300 million each year.6 As a more comprehensive solution, we recommend a mutual recognition scheme whereby states honor each other’s medical licenses. This model has been successfully adopted in Europe and Australia and by the Veterans Health Administration, US military, and US Public Health Service.3 Furthermore, because standards for medical education apply nationwide and physician training requirements are set by federal agencies such as HHS, mutual recognition is warranted.

Proponents of the status quo argue that mutual recognition compromises patient safety, reduces revenues from state licensing fees, and complicates physician reimbursement. To address these challenges, mutual recognition should be accompanied by (1) a federal mandate, (2) consistent standards for using and regulating telemedicine services, (3) increased data sharing among states, (4) financial support for states, and (5) a requirement for physicians to select an SPL.

To reduce barriers to interstate medical practice, some states have attempted unilateral action. For example, in 2016, the Florida House of Representatives passed a bill with a provision allowing physicians licensed in other states to offer telemedicine services in Florida. However, the Florida Senate eliminated the provision. To avoid similar situations, Congress can require states to participate in mutual recognition. In fact, legal research suggests that federal action to promote interstate telemedicine is justified based on the Commerce Clause of the US Constitution, which states that Congress has the power “to regulate commerce…among the several states.”4 Another benefit of instituting a federal mandate is a consistent set of definitions needed to support mutual recognition (eg, SPL).

Each state currently defines the “practice of medicine” differently, making it difficult to discern what constitutes an acceptable telemedicine consultation in any given state. Standards of practice, conduct, and behavior during telemedicine consultations—including requirements related to physician credentialing, patient education, and physician supervision of other healthcare professionals&mdash;vary widely among states.3 Thus, the shift to mutual recognition must be accompanied by efforts to establish consistent standards for using and regulating telemedicine services. These standards should be defined at the federal level.

State medical boards are tasked with the responsibility of monitoring and disciplining physicians licensed in their state. However, due to gaps in information sharing among states, nearly one-third of physicians disciplined in one state are able to practice elsewhere without limitations, repercussions, or public disclosure. This is especially dangerous in a mutual recognition scheme in which out-of-state physicians routinely see and treat patients with little oversight.

For mutual recognition to promote patient safety, information on malpractice, medical errors, and license cancellation or suspension must be shared among states, made publicly available to patients, and used to enforce disciplinary actions across state borders. States should use resources like the National Practitioner Data Bank, established in 1986 as a central data repository for malpractice payments and state disciplinary actions, to conduct rigorous background checks before physicians participate in telemedicine consultations and deliver care across state borders.

Given the administrative and technological costs of implementing mutual recognition and dismantling the existing state-based medical licensure system, HHS could provide states with incentive payments for adopting mutual recognition agreements and eliminating state-specific licensing and renewal fees. Additionally, HHS could offer grant funding to enhance interstate data sharing systems and other functions that promote mutual recognition. While financial support for states is an important first step, mutual recognition can reduce healthcare costs in the long run as telemedicine services increase access to care for rural and underserved populations.

One challenge of mutual recognition is attributing physicians to any given state. This can complicate physician reimbursement for telemedicine services and reduce the effectiveness of state healthcare programs dependent on physician participation. A possible solution is requiring physicians to select a single SPL for questions regarding reimbursement and attribution. This requirement already exists for physicians participating in the Interstate Medical Licensure Compact. Because physicians would fall under the jurisdiction of their SPL’s medical board, the SPL could hold primary responsibility for collating information from interstate data-sharing systems and enforcing disciplinary action against errant physicians.

Author Disclosures: Dr Jain is an employee of CareMore and Aspire Health, which are both multistate provider entities. Ms Chandrashekar reports no relationship or financial interest with any entity that would pose a conflict of interest with the subject matter of this article. 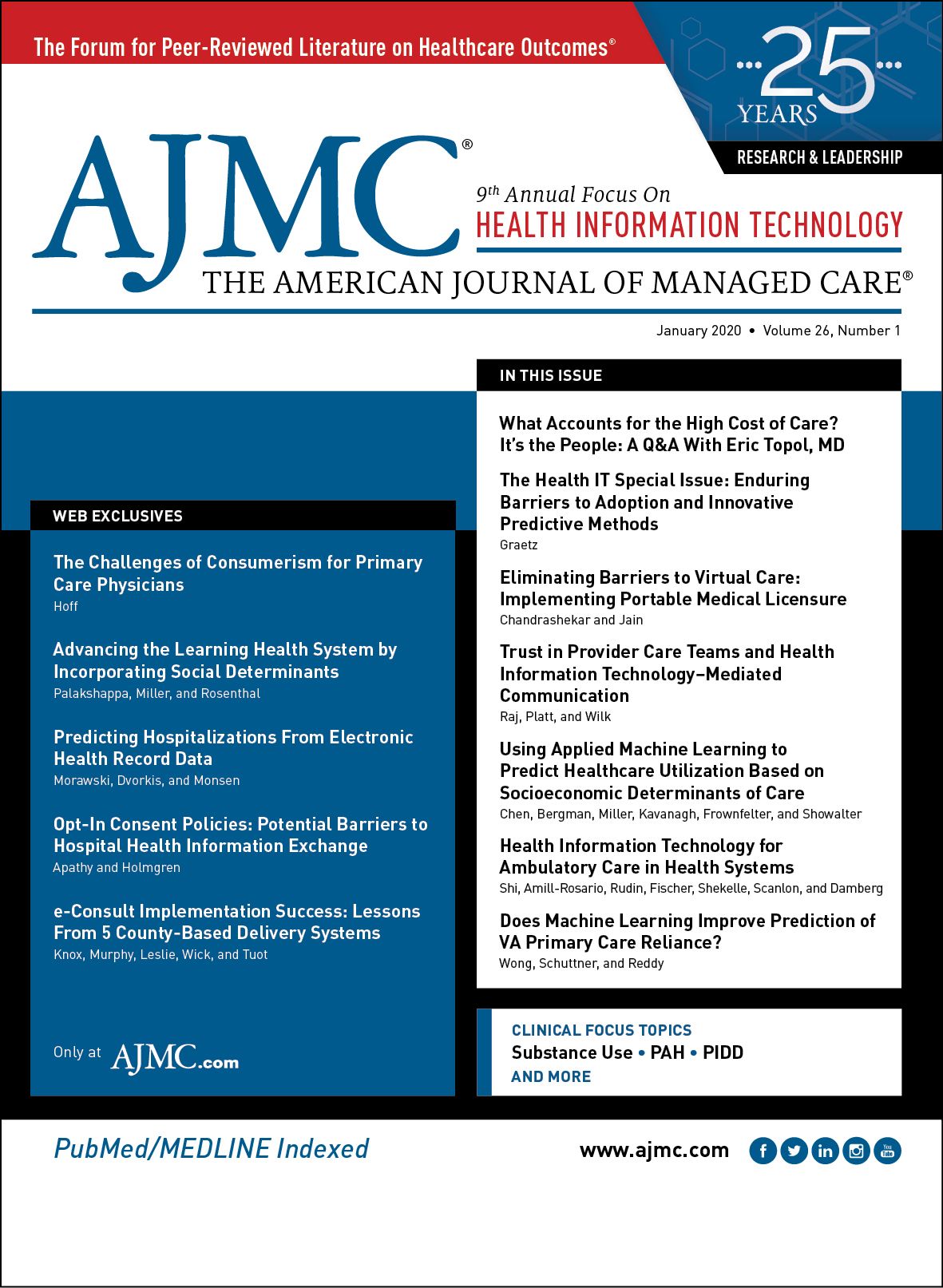