Expert Panel: Access to Multiple Treatment Options Is Needed to Continue the Fight Against HIV

A multidisciplinary panel of HIV experts gathered in October 2016 to discuss the current state of HIV care and develop critical recommendations for Pharmacy and Therapeutics (P&T) committee members to consider when developing policies affecting their member populations who are living with HIV. This paper presents the panelâ€™s discussion, consensus opinion, and conclusions.

*Jeff Dunn was unable to participate in the October panel meeting, but was actively engaged in the development of this article.

Tremendous advancement has been made in the treatment of HIV/AIDS from its early days as a deadly epidemic until today, when HIV can be managed as a serious chronic disease.1 Many factors have contributed to the improved management of HIV, but it is the development of modern antiretroviral (ARV) medicines— which enabled individualized, highly effective treatment regimens&mdash;that has made the most impact.2

We are now at a point where significantly decreased mortality,3 the chronicity of HIV, and the availability of additional drug combinations are fueling a rising spending trend for ARVs among public and private payers. As a result, formulary decision-makers may be exploring options to contain costs, while increasing access to novel treatments. This panel of experts examined the converging market dynamics impacting the ARV category to help payers address the challenges of HIV population management through a sustainable, US Department of Health & Human Services (DHHS) guidelines-based approach to ARV access. The panel felt this approach was critical since it offers unbiased, evidence-based recommendations that seek to optimize HIV care and outcomes based on individualized treatment goals. They concluded that access to agents across all ARV drug classes is essential to meeting individualized therapeutic needs.

Evolution of the HIV Epidemic to Serious Chronic Disease

The first cases of what would later become known as HIV/AIDS were identified in 1981.1 Shortly after these cases were documented, the disease began to spread at epidemic proportions into the mid-1990s.2 In 1994, it was the leading cause of death in the United States among 25-44 year olds.1

The advent of potent combination ARV therapy followed in 1996 and, since that time, has dramatically reduced HIV-associated morbidity and mortality.

In addition to these well-known benefits, virologic suppression in the setting of ARV treatment has also proven to be highly effective at preventing HIV transmission.4

Today there are 6 major types of ARV drugs classified by the way they interfere with HIV replication. Modern ARV regimens combine 3 active drugs from at least 2 of these classes in order to achieve virologic suppression and minimize the opportunity for resistance to a particular type of ARV.4,5 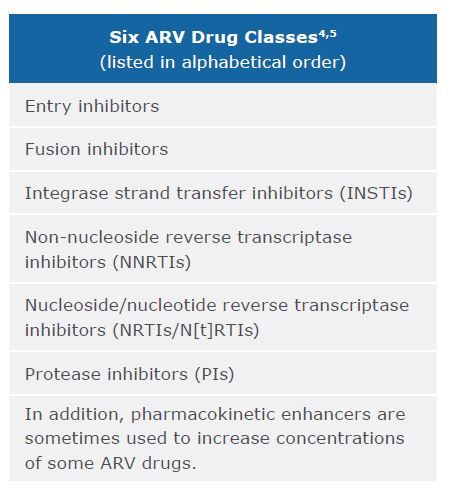 Along with spurring accelerated medical and pharmaceutical research, the challenges of HIV/ AIDS hastened the adoption of global goals, established by the United Nations (UN), to focus on response efforts. Similar goals have been adopted in the United States within the National HIV/AIDS Strategy (NHAS) and are being adapted to specific population management needs within major cities, such as San Francisco. Referred to as the “90-90-90” goals, they call for: 90% of the HIV population being diagnosed, 90% of diagnosed patients being on treatment, and 90% of those on treatment being virally suppressed.6

While significant progress has been made, these goals have been challenging to achieve in the United States. According to the most recent (2013) Centers for Disease Control (CDC) report, only ~57% of the HIV-diagnosed population is receiving consistent medical care, and only ~55% is virally suppressed—far below the “90-90-90” goals.7

Access to care and treatment is central to fighting HIV. Many US government initiatives focus on ensuring access for people with HIV. For example, Medicare Part D’s designation of ARV drugs as a protected class to ensure access for patients led to many commercial and Medicaid plans adopting similar policies over time.8

The combined public and private effort has achieved substantial progress in the fight against HIV over the last 2 decades, as evidenced by these facts:

Development of ARVs allowed HIV to be treated, though regimens in the early period were burdensome and associated with serious adverse events. The introduction of newer, more tolerable agents, fixed-dose combinations, and novel strategies for combination ARV delivery, such as ‘boosting’, have led to improvements in the tolerability and durability of regimens.11 In order to encourage further innovation and continue providing effective care and treatment for people living with HIV, panel members reinforced the need for P&T decision- makers to maintain access to ARVs from all of the 6 drug classes consistent with medical guidelines.

Market Dynamics Will Impact HIV Management in the Future

A variety of factors pose challenges to continued progress towards HIV population management goals. These include evolving HIV population demographics, suboptimal adherence to drug regimens, risk of ARV resistance, and increases in spending for HIV treatment.

Socioeconomic factors can contribute to disparities in care. Prevalence of HIV and other sexually transmitted diseases (STDs) in a community, higher rates of undiagnosed/ untreated STDs, language barriers, poverty, discrimination, and higher rates of incarceration among men all present significant challenges to the management of the disease.9

“Each patient should be approached/ considered differently because of the significant obstacles they face in addition to their HIV—factors such as mental health conditions, substance abuse issues, poverty, homelessness, etc.”—Jerry Cade, Medical Director, Viral Specialty Treatment Service, University Medical Center

Suboptimal adherence and risk of resistance

UNAIDS and the NHAS 2020 have both established separate adherence targets of ≥80% for people living with HIV in order to support community viral suppression—a goal that is unmet in the United States, according to CDC surveillance data.7,12 In fact, in one meta- analysis of over 17,500 patients in the United States living with HIV, 45% did not maintain≥80% adherence.13

Difficulties with adherence can arise from a number of issues, including, but not limited to, complex medication regimens; patient-related factors, such as comorbidities, the experience of adverse effects, or substance abuse; and health system issues, such as interruptions in patient access to medication and inadequate education and support.4

The result of suboptimal adherence can be reduced treatment response or even treatment failure and resultant emergence of drug- resistant viral mutations that may compromise the patient’s future treatment options.4 Resistance may also be transmitted to patients who are ARV treatment-naïve. This means ARV class options could already be limited for treatment-naïve patients. In all of these cases, panel members point out that resistance is permanent and can limit future treatment options.

For example, evidence suggests that the chance of developing HIV drug resistance increases with length of time on therapy, meaning that patients may require treatment with different ARV regimens over the course of their lives to maintain viral suppression.14 Panel members highlighted that a long-term view on the risk of resistance, as well as suboptimal adherence considerations, point to the importance of individualized treatment.

The importance of addressing adherence is highlighted when considering that additional instances of managing resistance can be costly. An example is demonstrated in a Canadian study by Krentz et al, aimed to measure and compare the direct costs of HIV-related care in patients with HIV drug resistance vs no resistance. The researchers found that secondary resistance increased per-person-per- month costs by 22%.15

The changing HIV landscape has led to increases in spending on ARV agents. According to an Express Scripts report, HIV medications ranked as the 6th highest per-member-per- month spend in 2016 for commercial payers.The report forecasts that spending will continue to rise through 2019.16

“Although spending on ARVs is increasing and needs to be contained, we must also realize that a near-term focus on increased management of ARVs, without factoring in the benefits of community viral suppression, could slow or block progress in the fight against HIV. In other words, the more people living with HIV who are fully suppressed leads to fewer new HIV infections and, therefore, may help contain costs now and over the longer term.”—Expert panel consensus opinion

Increased spending trends could lead some payers to consider traditional utilization management tools, such as prior authorization and step edit requirements, with the hope of reining in drug spending. But, the panel members point out that the unique challenges of HIV/AIDS call for a more expansive approach to sustain and advance the progress made to date.

a specific, multiclass combination that can achieve and maintain viral suppression.4

Despite the efficacy of current ARV regimens, virologic failure can occur for a variety of patient-related and drug regimen-related reasons. In the case of virologic failure, a thorough medical assessment and updated HIV drug-resistance testing is required before a new regimen is prescribed. The guidelines state that a new regimen should contain 2 or 3 “fully active” agents, which are agents that are expected to have uncompromised activity on the basis of the patient’s treatment history, HIV drug-resistance testing results, and/or the drug’s novel mechanism of action.4

The expert panel also recommended the use of once-daily fixed-dose combination products and single-tablet regimens because they believe it supports improved adherence. Further, continued innovations in HIV drug therapy will be critical to help overcome other challenges discussed in this paper, especially reducing the infection rate, improving adherence rates, achieving targeted viral suppression rates, and reducing the risk of ARV resistance.

The possibility of increased transmitted resistance, the threat of multidrug resistance,4 and the chance of developing HIV drug resistance increasing with length of time on therapy14 reinforces that patients—both naive and treatment-experienced&mdash;may require access to different ARV classes over the course of their lives to maintain viral suppression.

“DHHS Guidelines clearly support effective management of HIV through access to ARVs from all of the 6 drug classes. Restricting access to HIV medications could potentially hamper progress.”—Expert panel consensus opinion

The panel advocated for open access to a broad array of treatment options. They agreed this is the best strategy for the attainment of individualized ARV treatment goals within a diverse population of people with HIV. However, due to market dynamics, they recognized that some plans may seek limited management of ARV formularies. While the panel did not endorse this approach, their opinion was that any management of ARVs should be done judiciously within each of the 6 classes, rather than broadly at the therapeutic category level.

The DHHS Guidelines support the rationale for this approach and are an essential tool for payers to consider and apply when developing effective ARV policies and drug formularies.

The panel agreed that it is critical to ensure the greatest access to the therapeutic options that are most effective and offer the strongest clinical data within each of the 6 ARV classes.

The panel identified key considerations for drug evaluation on formularies, which include efficacy, safety, durability, tolerability, long-term viral suppression, and barrier to resistance. This approach will support payers in attaining management goals for people living with HIV and containing total cost of care, while preserving and extending the remarkable progress achieved to date in the fight against HIV/AIDS.

10. Centers for Disease Control and Prevention. HIV in the United States: At a Glance. http://www.cdc.gov/hiv/statistics/overview/ataglance.html. Published November 2016. Accessed November 18, 2016.

11. Broder S. The development of antiretroviral therapy and its impact on the HIV-1/AIDS pandemic. Antiviral Res. 2010;85:1.