Bruce Feinberg, DO: Steve, I have to bring you in, because we certainly have examples now in other disease areas where there is a class of drug with multiple members in that class that have nuanced differences. But from a payer perspective, it makes sense to leverage 1 class as preferred. There are financial reasons and management reasons for doing that. I think that’s understood and logical. In the case of, let’s say, TNF [tumor necrosis factor] inhibitors in the rheumatologic population, we saw that with step edits and tiering of drugs. I’m curious if you see that happening. It’s always been politically incorrect to do that in cancer. As we evolve in a value-based care environment, if you see that happening, where you will start to look at it? There may be some nuanced differences in a rare patient who may benefit from 1 drug over another, but you’ll see movement in the payer world when you start to have 3, 5, or more TKIs [tyrosine kinase inhibitors] of the same class. You’ll start to have a preferred TKI.

Steven Peskin, MD, MBA, FACP: Yes, great question, Bruce. The 3 marketed products are tier 2, where they’re at parity. For Dr O’Shaughnessy or Bill making their decision based on their preferences, there are prior authorizations associated there, which we were talking about earlier. They are all currently on a level playing field for us and all preferentially positioned in the current formulary benefit design structure. There are other areas in oncology where there may be some agents that are more preferential, but certainly for the purpose of today’s conversation with the 3 market products that I have a tough time pronouncing, they’re at parity and at the best level of tiering.

Bruce Feinberg, DO: In my mind, at a clinician level, it starts to sound like a clinical pathway where you start to prefer agents over other agents, and it may be because of efficacy and toxicity reasons. But when efficacy and toxicity are, for the most part, equivalent, it may be cost. I’m curious if you see clinicians starting to move in that direction. Institutionally, there may be pressure to start to look at it. There clearly is it a practice level. If you’re in an OCM [Oncology Care Model] practice, there is pressure to control cost. Part of controlling cost is going to be not just cost from a societal perspective, but even cost to a practice based on contracts. I’m curious if you see there to be more pressure on oncologists to start to say, “We need to pick 1.”

William J. Gradishar, MD: That’s probably going to happen. I guess the example is, if tomorrow 1 of the CDK4/6 inhibitors disappeared, would I feel like I’m getting Brand X that I had to give my patient? The answer is, no. At least as we understand it right now, subtleties aside, these agents are equally effective as a class. There might be nuances and all the caveats that Joyce suggested that 1 drug might&shy;—and I underline the “might”&mdash;be better in a certain subset of patients.

We don’t have a lot of compelling data yet. I think that we’re moving in that direction and the biosimilar example is perfect, because formularies are just incorporating these. When we order trastuzumab, I don’t know which biosimilar I’m getting. I feel pretty comfortable that they’re getting trastuzumab, it’s going to work well, and it’s not going to make me feel like I’m compromising the patient’s outcome. As long as the data suggest that these agents, whichever class we’re talking about, are clinically equally effective and have toxicity that’s similar, then I don’t see why we wouldn’t be judging based on cost.

Bruce Feinberg, DO: Would route of administration with frequency in dosing, or any of those nuanced differences that have always been much less important than toxicity and efficacy, play a role?

William J. Gradishar, MD: Sure. That that enters into it. With oral medications, maybe less so, but certainly when you start thinking about anything that might be IV [intravenous], requiring administration cost and differences. It’s not as convenient to patients if they have to come more frequently for something, and that’s part of the equation as well. 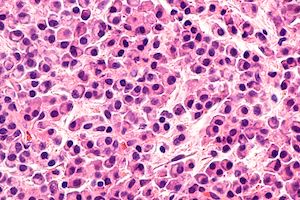 A recent study found that ixazomib was associated with better progression-free survival versus a placebo in multiple myeloma regardless of cytogenetic risk status.