The CDC has found that some digital programs meet standards required to help payers deliver behavioral health programs for persons with obesity, or those who are overweight with at least 1 cardiovascular risk factor.

The last 5 years have seen monumental and rapid shifts in the approach to healthcare delivery. A system that for decades measured success by the number of tests, procedures, and general activity is now shifting its focus to value, prevention, and above all, outcomes.

This shift couldn’t come at a more critical moment for Americans’ health. In 2009, the CDC called chronic diseases like obesity, diabetes, and heart disease “the public health challenge of the 21st century.” The agency reported that the corrosive effects of sedentary lifestyles and poor diets will cause 75% of Americans to develop preventable chronic conditions that lead to shorter, less healthy lives. Currently, 29 million Americans have type 2 diabetes mellitus (T2DM), and the CDC estimates that, if current trends continue, 40% of all Americans will be diagnosed with the disease in their lifetimes. Even more alarming, 87 million Americans already have prediabetes—the clinical precursor to T2DM. Between 1990 and 2013, the prevalence of diabetes in the United States rose by 71%.1

But diabetes is just one of several obesity-related chronic conditions poised to wreak havoc on the American healthcare system in the coming years. While the percentage of overweight and obese Americans (those with a body mass index over 30 kg/m2) is no longer rising at a truly drastic rate (from 1998 to 2006 the number increased by 37%), 60% of all Americans are now considered overweight or obese with the percentage of those considered “obese” continuing to rise ().

Obesity-related conditions have become some of the most pervasive and deadly diseases in the country. In addition to the clinical impact and toll in individual suffering, addressing the obesity epidemic has become an economic imperative. Direct medical costs for obese Americans are nearly $2000 higher than those for persons with normal weight—and that’s not including the indirect costs of other medical conditions caused by obesity.

For individuals with chronic conditions like diabetes, the numbers are even more staggering. A recent study by the Health Cost Institute estimated that a patient with diabetes costs their health plan and employer, on average, about $10,000 more per year.2 As the cost burden continues to shift toward payers and patients, organizations are wrestling with how to deal with this growing problem.

FROM PILLS TO PREVENTION

Policy makers, payers, and providers all agree something has to change. There is a growing consensus that preventive behavioral and lifestyle changes not pills or procedures are the most effective solutions. However, these behavioral interventions our first line of defense against the progression of chronic disease have to date been offered only in person. Unfortunately, such face-to-face programs have had difficulty with geographic coverage—making it difficult for potential patients to access providers to administer the program&mdash;and with scaling quickly enough to meet the needs of the large populations who require be-havioral interventions.

Across the healthcare system and aided by provisions of the Affordable Care Act, programs incentivizing preventive treatment options are becoming increasingly widespread, and in some cases popular. But 2 recent government actions in particular offer both a challenge, and hope, for US health plans and employers.

Last August, the US Preventive Services Task Force (USPSTF), an independent body of primary care physicians, scientists, and medical professionals, provided guidance for commercial health plans. The USPSTF Task Force issued a final recommendation that doctors should provide or refer obese individuals, or overweight individuals with at least 1 cardiovascular risk factor, to intense behavioral counseling programs aimed at promoting a healthy diet and increasing physical activity. To underscore its importance, the USPSTF gave this recommendation a “B” rating—meaning that for any commercial health plan starting August 2015 or later, behavioral counseling must be covered as a preventive health benefit. Plans starting January 1, 2016, or later must begin complying with this recommendation within the following year.

In making this recommendation, the USPSTF relied heavily on a landmark clinical trial published almost 2 decades ago. The study analyzed the Diabetes Prevention Program (DPP), which tested how diet and activity changes could delay the onset of diabetes for those at high risk for the disease. It found that lifestyle interventions—not medica-tion or a placebo&mdash;were the most effective treatment for prediabetes, lowering the incidence of the disease by 58%. In follow-up analyses of DPP data, participants in the lifestyle intervention group saw an improvement in high blood pressure, triglycerides, HDL cholesterol, and other risk factors for heart disease. In its August recommendation, the USPSTF specifically cited the DPP as a potential solution for those individuals needing intensive behavioral counseling.

Based on the results of this study, in 2010 Congress authorized the CDC to create the Diabetes Prevention Recognition Program (DPRP) and to give programs that met the DPRP’s evidence-based standards official recognition. But, until recently, DPRP programs were only offered in face-to-face settings— making them expensive to set up, and less accessible to large population segments.

This past March, the door was opened to a more cost-effective, and scalable, solution. For the first time, the CDC recognized a class of digital programs as meeting the evidence-based standards of the DPRP. The Prevent program of-fered by Omada Health was among the inaugural group of digital programs that received the DPRP’s recognition. Recognized programs must meet or exceed the outcomes achieved by the original in-person DPP.

By embracing online programs, the CDC has recognized the power of the digital health industry to address a pressing health crisis, and the fact that a new branch of medicine, dubbed digital therapeutics, may hold the key to delivering lifesaving interventions to those who most need them. For the first time, health plans and self-insured employers have a tool that can (1) fulfill their regulatory obligations for this type of preventive benefit; (2) demonstrate successful outcomes and cost-effec-tiveness; and (3) be quickly scaled and delivered to the populations with the greatest need for intervention.

Digital therapeutics are not simply health or health coaching applications, or even wellness programs. They are evidence-based translations of behavioral interventions that engage participants, maintain clinical fidelity, and deliver lasting, verifiable outcomes (). At Omada Health, we expanded our Pre-vent curriculum at the beginning of the year to include hypertension, heart dis-ease, and conditions beyond diabetes the same set of conditions included in the USPSTF guidance. Other companies such as Propeller Health and Recovery Road are developing therapeutics for chronic conditions beyond diabetes.

Digital therapeutics offers a cost-effective alternative for health plans and employers. Instead of creating behavioral intervention programs from scratch, without knowing whether they’ll be effective in preventing diabetes and keeping down enterprise costs, these organizations now have the option to implement turn-key yet customizable programs, backed by CDC recognition, with proven efficacy and cost-effectiveness. Initial economic projections for digital therapeutic pilots such as Pre-vent demonstrated a break-even point at the end of year 2 and a projected savings of $1300 to $3500 per participant over 5 years ().

In addition to cost-effectiveness and scalability, digital therapeutics poten-tially offers another advantage over traditional in-person behavioral inter-ventions. By collecting data in the form of weigh-ins, time between logins, leson completion, and more, as well as measuring which patient populations respond more readily to certain incentives or challenges, these programs can reach participants in the right way at the right time, leading to increased engagement and better outcomes. Finally, social networking features, and, in the case of Prevent, personalized coaching by full-time health professionals, add a level of support and accountability that enables lasting change.

As part of our company’s commitment to accountability, we conduct ongoing clinical trials. Earlier this year, we became the first digital health company to publish 2-year results for participants in our diabetes prevention program. In summary, those results demonstrated that individuals who complete our digital translation of the DPP achieve clinically meaningful reductions in body weight and blood sugar, and maintain those reductions 2 years after completion. While there are still more data to analyze and more studies to publish, early results indicate that digital behavioral interventions can be as effective, or even more so, than in-person versions.

Benefits managers, health plan actuaries, and healthcare systems across the country will now be required to incorporate a new preventive benefit for their employees or beneficiaries. They will have to do so in a way that generates positive health outcomes while maintaining the financial interests of the organization. Many payers are already carefully evaluating which preventive programs should be implemented and looking for demonstrable benefits for their organizations. It’s quite possible that digital therapeutics presents the ideal solution to their regulatory problems.

Disclosures: The Prevent program of-fered by Omada Health is among the digital programs recognized by the CDC to meet the regulatory requirements discussed in this article. References 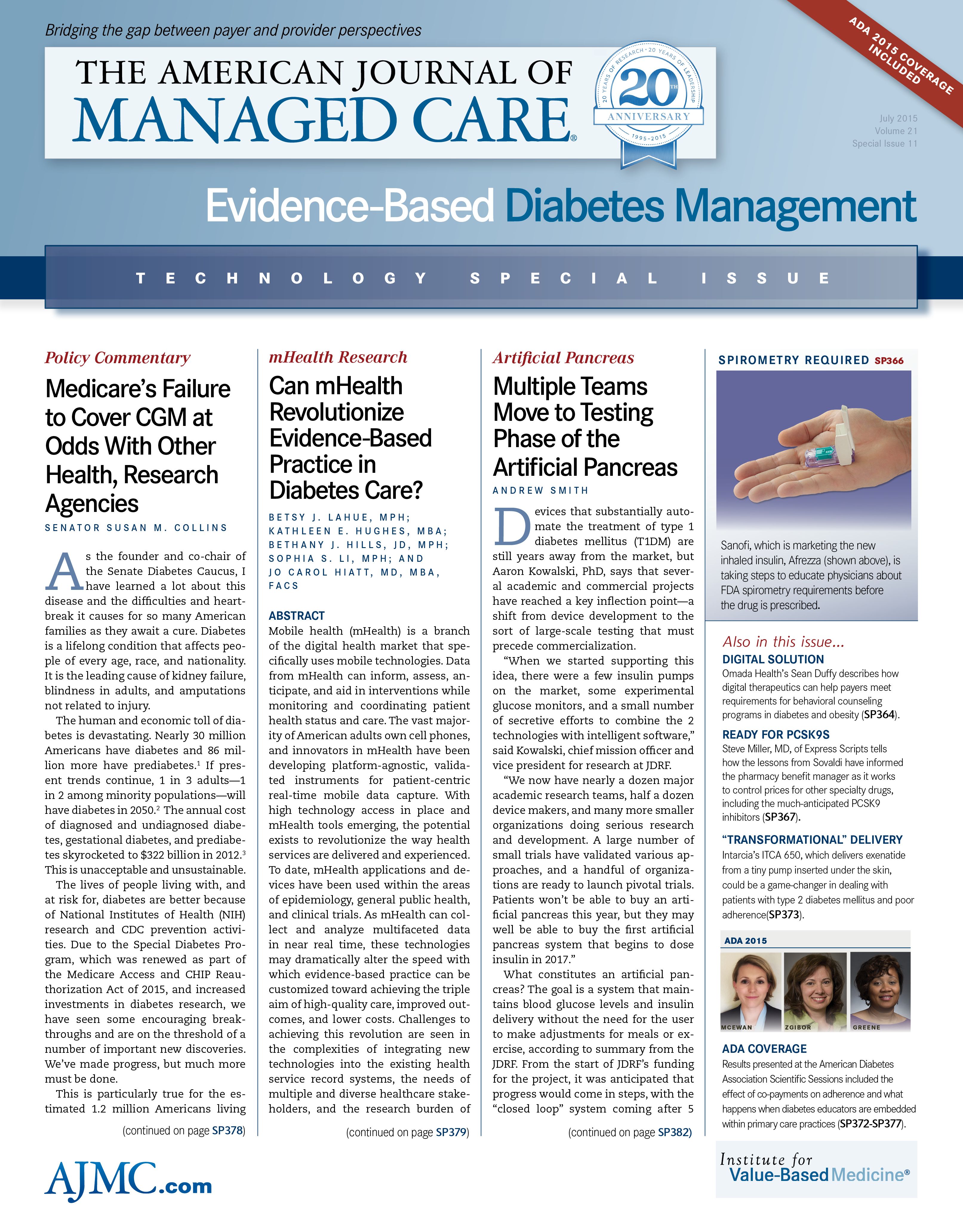