It's Time to Embolden the Nation's Experiments With ACOs

The ambiguous results of the Pioneer ACO evaluation could undermine the case for experimentation, and deter policy makers from moving forward as urgently as they must in order to improve on the ACO model. But it shouldn't.

"Small collective impact." Those 3 words constituted the thrust of the recently released evaluation of Medicare’s 32 Pioneer accountable care organizations (ACOs) in their first year of operation (2011-2012).1 Overall, the Pioneer ACOs saved an estimated $146.9 million for the Medicare program—a sum equal to about .003% of overall net Medicare spending in 2012.

The fact that lower spending from a group of 32 health organizations barely made a blip in the big picture isn’t surprising. What’s most surprising, based on the evaluation, is that any savings occurred at all, given the complexity of the transition inherent in moving to lower-cost, higher-value care. In fact, the evaluation of the Pioneer results, performed by L&M Policy Research (Washington, DC), opens a window on how complex the process of changing the healthcare delivery system actually is, considering:

. About half of the Pioneer ACOs saw lower growth rates in the area of spending than did a comparison group of Medicare beneficiaries not aligned with an ACO. The evaluators suggested that these organizations might have been successful in pulling services back into physicians’ offices and out of hospital outpatient departments, where the services were reimbursed at a higher rate. That explanation seems plausible enough, and would jibe with a sense that physicianled, cost-conscious ACOs were keeping a tighter rein on the costs of care.

. More problematic is the finding that, for nearly all of the Pioneer ACOs, there was no difference in inpatient spending compared with their local fee-for-service markets. This outcome seems counterintuitive, since better management of patients with chronic illness, for example, has been expected to lead to lower hospitalization rates.

. Perhaps most surprisingly, spending on skilled nursing facilities and home health agencies grew significantly faster among beneficiaries aligned with the Pioneer ACOs than it did for other beneficiaries in the same local markets. The evaluators hypothesize that the Pioneer ACOs may have tried to “substitute higher acuity or a greater volume of [skilled nursing facility] days or home health episodes for acute stays.” But if this indeed was the case, why was inpatient spending still relatively high?

It’s hard to come away from reading such an analysis without having a lot of questions, and a profound sense that patterns of care in ACOs are still so much in flux that it is hard to make heads or tails of these early results. We also know that some Pioneers have already abandoned the ACO program and switched to the alternative Medicare Shared Savings model. And according to the L&M evaluation, 1 Pioneer ACO actually had higher Medicare spending growth than the rest of its overall market.

Beyond concerns about grasping at straws by reading these early evaluations too closely, I worry that there is an even greater risk. Ambiguous results such as these could undermine the case for experimentation, and deter policy makers from moving forward as urgently as they must in order to improve on the ACO model.

The Medicare Shared Savings model, enshrined in the Affordable Care Act (ACA), and the Pioneer program created by the Center for Medicare & Medicaid Innovation (CMMI), are now 3 to 5 years old, if not older. The environment has changed mightily since congressional staffers were crafting the ACO language in the law and contemplating what the political and other realities of that era would tolerate. The conventional wisdom at that time was that both providers and patients would have to be transitioned in a gingerly fashion away from the prevailing model of fee-for-service healthcare. And above all, no policy maker wanted to run the risk of a political backlash from beneficiaries who felt that they were being pried away from their regular doctors—or locked into new care models of unproven quality.

The clear result is that the ACO models established by law, or those created by CMMI, don’t have enough carrots or sticks built in to spark dramatic change. And the radically different landscape that has emerged with full-blown ACA implementation suggests that it is time to put a stronger set of incentives in place.

Policy makers should begin with sizable carrots to entice beneficiaries to sign on with ACOs and agree to tighter limits on care. CMMI should mount an experiment in which beneficiaries can obtain discounts on their Part B premiums, or similar financial incentives, if they agree to enroll in tightly managed “narrow network” ACOs. With nearly 1 in 3 Medicare beneficiaries now enrolled in Medicare Advantage plans, it’s clear that many enrollees have grown comfortable with preferred provider or even HMO-style networks. And despite concerns being voiced about the narrow networks in many health plans available on new health insurance exchanges, a recent Kaiser Health Tracking Poll shows that these plans hold appeal for enrollees who are most concerned about holding down costs.2

It is well worth testing whether beneficiaries with financial “skin in the game” would be more inclined to see their healthcare more actively managed by an ACO. Such organizations would affiliate with hospitals, nursing homes, and other providers that fully understand that the goal is not necessarily just to shift care from one venue to another, but to provide care in the most cost-effective setting. It is hard to believe that beneficiaries and ACOs with these more clear-cut incentives would produce results as muddy as those found in the first-year Pioneer evaluation. And if they did, we would pretty much know then that reinventing US healthcare was a hopeless effort.

Clearly, at least a part of America’s largely dysfunctional policy-making apparatus has some appetite for further change. A small bipartisan group of US Senators and House members recently unveiled the Better Care, Lower Cost Act, which would expand the use of multidisciplinary health teams to coordinate care for Medicare enrollees with multiple chronic conditions.3 Under their proposal, health plans and providers would create “Better Care Plans” or “Better Care Practices,” which would be paid on a risk-adjusted, capitated basis and rewarded for producing better health outcomes for beneficiaries. As currently proposed, enrollment would be voluntary. But this is just the type of experiment that could be made far bolder and potentially more effective if beneficiaries had substantial financial incentives to sign up.

Download PDF: It's Time to Embolden the Nation's Experiments With ACOs 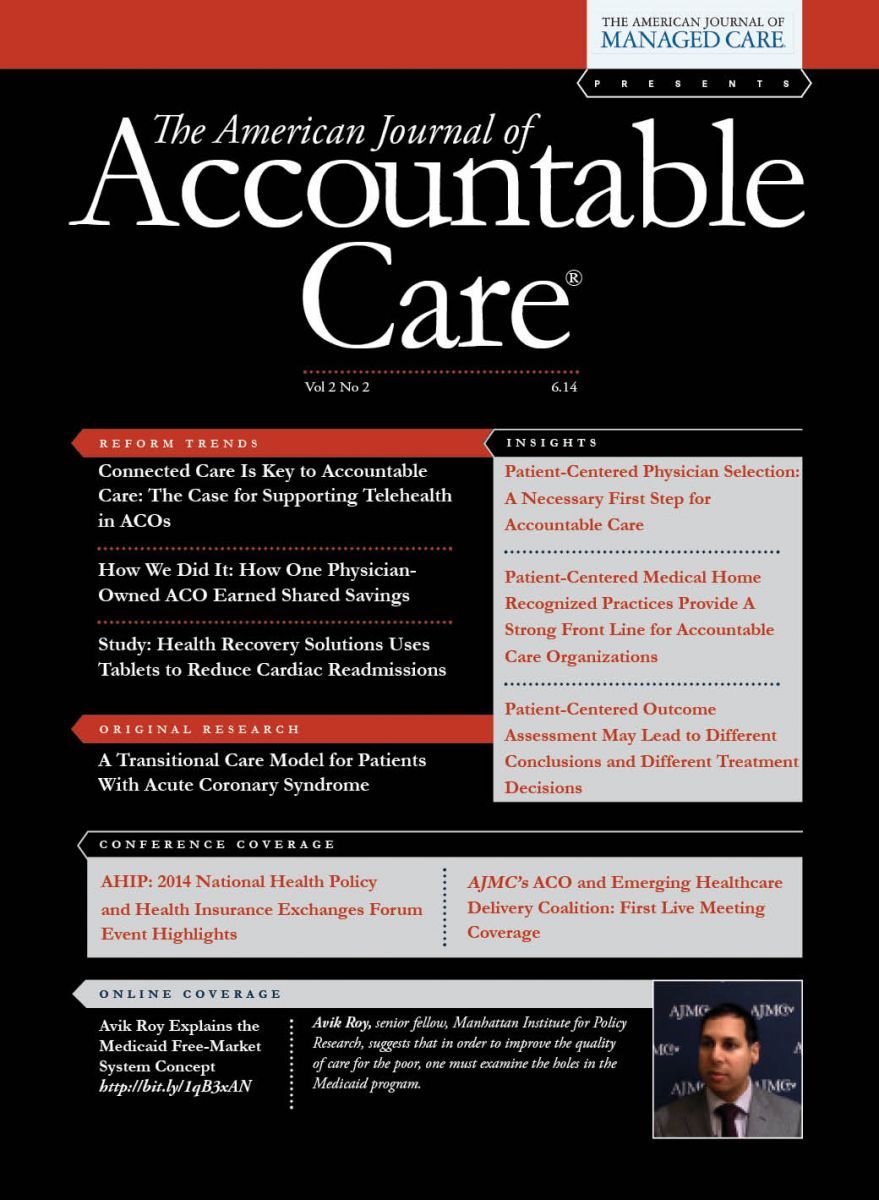 Using Payment Reform to Improve the Value of Maternity Care
Value-Based Insurance Design: Infusing Clinical Nuance Into Healthcare Transformation
Kathleen Sebelius' Name Is Not on Any Ballot. But Make No Mistake, This Is Her Campaign
A Novel Pharmaceutical-ACO Collaboration: The Merck/Heritage Provider Network Open Innovation Challenge
The Best of Reform: Postacute Care Bundling
Enhancing Patient Experience in an Era of 'Pay for Experience'
It's Time to Embolden the Nation's Experiments With ACOs
Four Key Technologies for Physician-Led Accountable Care Organizations
The Arkansas Medicaid 'Private Option': Lots of Hype, but Little Reform
Related Videos
Related Content

With atopic dermatitis (AD) prevalence increasing around the world, primarily in developing countries, investigators evaluated the potential for pollution to have an impact on development of the chronic skin condition among an adult population.