The Medicare Advantage (MA) program continues to grow and thrive, despite plan payment cuts imposed through the Affordable Care Act. What explains this surprising outcome (one that is strikingly different than the experience of MA plans in the late 1990s, when payment cuts led to dramatic shrinkage in enrollment and curtailment of plans)? This analysis argues that a combination of factors, including the way payment cuts were imposed, the plan offerings, the characteristics of beneficiaries, and the way they make choices together explain the program’s current health. Understanding these factors is important for MA, Medicare, and, more generally, for participants in new payment models.

The Medicare Advantage (MA) program gives Medicare beneficiaries the option to choose a private health plan instead of fee-for-service (FFS) traditional Medicare. However, MA plans must provide benefits that are at least actuarially equivalent to traditional Medicare. The vast majority of MA plans have been managed care plans, primarily HMOs, which use primary care gatekeeping, utilization management, and selective provider networks to reduce healthcare spending. In exchange for these restrictions, MA beneficiaries typically avoid either the substantial cost sharing in traditional Medicare or paying an additional premium for supplementary coverage. MA beneficiaries also usually enjoy coverage for some additional services, such as vision and hearing. MA plans fully cover their enrollees’ care, receiving in return a risk-adjusted, monthly, per enrollee payment from the Medicare program.

Recent legislative attempts to correct for overpayments to MA have yielded a response strikingly different from an earlier effort’s results. After the MA-plan payment cuts imposed through the Balanced Budget Act of 1997, HMO availability dropped by nearly 50%: enrollment fell from 16% of the market in 1999 to 12% in 2002. In contrast, the MA market scarcely shrank at all in response to recent legislative “belt tightening” imposed through the Affordable Care Act (ACA) of 2010 (legislation also known as “Obamacare”). MA enrollment, now at its highest level ever (28% of total Medicare) is continuing to grow.1 Moreover, the disparity in health status of beneficiaries between MA and traditional Medicare—MA beneficiaries are, on average, healthier and lower-cost, which has been a competitive advantage for MA&mdash;has shrunk from that in earlier years.

What explains MA’s robust health and the restrained consumer response to these recent payment cuts by the government? Four factors provide an answer: first, the reductions in plan options expected to follow ACA payment cuts has likely been tempered because, unlike the payment cuts to plans in the late 1990s, the 2010 cuts are less severe and are being phased in over time. They are also combined with concurrent direct bonus payments to plans, depending on each plan’s quality rating. On net, MA plans today receive payments 6% above beneficiaries’ expected FFS costs ().

Second, MA beneficiaries today differ notably from those in the 1990s, as they have had much more and better experience with managed care. When MA plans terminate, despite Medicare policy that “nudges” them to traditional Medicare as the default option, the vast majority of MA beneficiaries indicate their persistent preference by actively choosing to enroll in another MA plan.2

Third, the products offered today by MA are superior to those of the past. Since 2003, many plans have offered more expansive physician networks, such as preferred provider organizations (PPOs) and private FFS plans. Today, 95% of Medicare beneficiaries have access to a local HMO or PPO, and 71% to a regional PPO.3 Access to private FFS plans, however, has declined given that (as of 2011) these plans were required to establish provider networks. The measured quality of MA plans, including patient satisfaction, meets and at times exceeds that of traditional Medicare.4 Beneficiary comfort with managed care and the variety and quality of plans have likely led significant numbers of newly eligible beneficiaries to choose an MA plan rather than traditional Medicare.

Fourth, multiple cognitive biases afflicting consumers’ decision making, such as status quo bias (the behavioral proclivity of individuals to persist with current choices when alternatives might be superior), are likely favoring MA plans.5 A further example: Medicare beneficiaries tend to value plan premium dollars more than total out-of-pocket dollars.6 MA plans, designed to capitalize on these tendencies, have shrewdly kept their premiums low, including offering “zero-premium” plans, while introducing other revenue-enhancing and cost-saving measures, including higher cost sharing and narrower physician networks.5 Without higher premiums to induce them to depart, many MA enrollees simply continue with their MA plans.

MA plans have suffered 3 competitive blows in recent years: a substantially reduced premium-surplus relative to traditional Medicare, a requirement to create provider networks, and a less favorable selection of clients. Nonetheless, MA plans are thriving, with a record percentage of enrollees. Unless cognitive biases are extremely powerful, it seems that MA plans represent a more attractive choice for a major fraction of beneficiaries.

The MA experience has broad implications for Medicare. One projection holds that many of the pilot accountable care organizations (ACOs) currently being established will evolve into private plans that accept full risk. How will these ACOs manage beneficiaries’ unrestricted choice of healthcare providers and minimize “leakage” (such as office visits) to providers outside the contracting organization? The MA experience is instructive. Successful ACOs will design incentives that reward clients for their participation and create a choice architecture that recognizes consumers’ decision-making biases. For example, such ACOs may make significant efforts to direct members to providers within the ACO when they are choosing a new doctor. Then, due to a combination of satisfaction and inertia, these patients will be likely to continue with these physicians in the future.

For organizations that provide health insurance, skillful melding of patients’ preferences and practices to promote choices that lead to cost-effective care is a likely recipe for success.

Source of Funding: Research for this paper was supported by the National Institute of Aging (P01 AG032952). 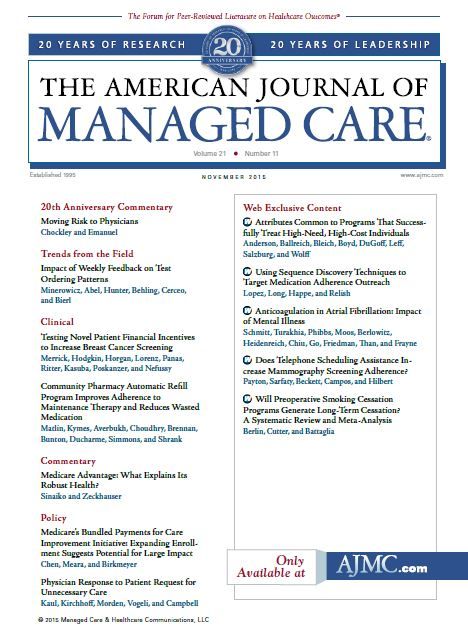 A new study aimed to assess the quality and reliability of videos uploaded to YouTube that provide information around spinal muscular atrophy (SMA).