This series of pharmacoeconomics posts will explore the meaning of $100,000/quality-adjusted life year (QALY) and why it might matter to these 4 P’s: patients, payers, providers, and pharma. Part 2 puts ICER into context so it can be applied to decision-making.

Last week, we began discussing the recent announcement by CVS Health in regard to their targeted strategy to lower drug prices at the time of launch (1 of 3 strategies outlined in their plan). In Part 1, we focused on the basic incremental cost-effectiveness ratio (ICER) and a scenario using quality-adjusted life-years (QALYs) as the primary measure for effectiveness. Part 2 puts the resulting ICER into context so it can be applied to decision-making.

When an ICER is calculated using all the costs and effects estimates in accordance with the methods recommended by the Cost-Effectiveness Supreme Court (aka: The Second Panel), the resulting ratio will be expressed in a dollar/QALY figure. By cost-effectiveness researchers reporting results this way, a decision-maker (government, private insurance, provider, or even a patient) can begin to think about whether a new treatment is providing good “value for money” compared to the old treatment. In other words, a new drug that only offers minimal effect gains but at a much higher price compared to the old treatment might not be considered a good value.

Over the last few decades, a $50,000/QALY threshold has become a predominant figure often referenced around pharmacoeconomic camp fires in the context of Medicare and End Stage Renal Disease coverage. This figure has been criticized for being too low, and there will likely be debate around any threshold set for various reasons we will discuss in Part 3. Either way, we will talk about how one might use any ICER threshold to make decisions.

Health economists frequently present the resulting ICER on a graph representing incremental costs on the y-axis and incremental effects on the x-axis (Figure 1). Fenwick et al. do a fantastic job diving into further detail about the 4 quadrants created by this. Let’s just focus on what each quadrant is saying conceptually.

Northwest & Southeast — Easy Decisions: After calculating the incremental costs (+$20,000) and effects (-0.5 QALYs) of a new drug compared to an older therapy, we get the x & y values to plot our point (-0.5, $20,000). In this case, the point estimate falls in the “northwest quadrant” and conceptually we realize that the new therapy costs more and we are worse off in terms of health. This decision is EASY! Why would we pay more to be worse off? The same goes for the “southeast quadrant” as our point estimates give us more health benefits for less money and seems to be a no-brainer.

Northeast & Southwest — Hard Decisions: Now this is where the challenge of making decisions regarding new therapies begins. After calculating the incremental costs (+$20,000) and effects (+0.5QALYs) of a new drug compared to an older therapy, we get the x & y values to plot our point (0.5, $20,000). Since both x & y values are positive, our point estimate falls in the “northeast quadrant” where the new therapy costs more but the patients are actually gaining more QALYs. We are left with a tradeoff: we get more health benefits but we have to give up more money. In the case of the “southwest plane,” we are saving money, but our patients are worse off (many would argue this is an easy decision, but for sake of argument it is still a tradeoff). This is where the “cost/QALY threshold” comes into play. If we say our threshold is “$50,000/QALY,” we are essentially drawing a line across our plane with the slope of 50,000/1 (Rise over run! Don’t you miss high school math?!?). When a new drug falls below our threshold (like 40,000/1 in this example), we then interpret the new drug as “good value for money.” Pretty easy, right? 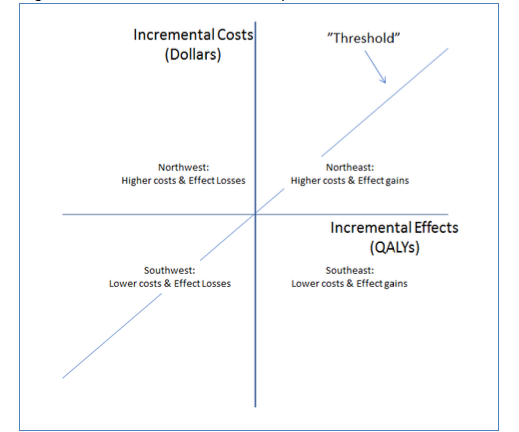 So, we have made a decision recommendation based on a calculated ICER and predetermined cost/QALY threshold…now what? Be sure to check out Part 3 as we consider all the various stakeholders impacted by these decisions and how the rules can influence the math itself.

A study of patients hospitalized for chronic obstructive pulmonary disease (COPD) exacerbation found that exclusively using the population-based Hospital Frailty Risk Score tool to assess for frailty may cause it to go undetected and untreated.

On this episode of Managed Care Cast, we speak with Tom Stanis, CEO and cofounder of Story Health, and Phillip Wood, Intermountain Ventures program director, on how their partnership came about, how it is going so far, and the future of their collaboration.

The authors conducted a subanalysis of data on 100,000-plus children from 3 studies to estimate the global prevalence and severity of eczema; they used linear mixed models to do so.

Biden’s State of the Union (SOTU) address emphasized drug access for those on Medicare, the Cancer Moonshot, and more; HIV diagnoses are increasing in Washington, DC, from missed wellness visits and preventive visits upended during the start of COVID-19; California online women’s pharmacy The Pill Club will pay $18.3 million in Medicaid fraud settlement with California.

The report helps clarify the urban/rural divide in cancer outcomes and the digital divide in telehealth access.