Pulmonary arterial hypertension (PAH) affects approximately 10% to 12% of patients with scleroderma and is a leading cause of mortality in this patient population. Scleroderma-associated pulmonary arterial hypertension (SSc-PAH) is characterized by progressive remodeling of the pulmonary vasculature. Pressure in pulmonary circulation as a result of these changes presents a higher workload for the right ventricle (RV), leading to RV failure and, ultimately, death. There is heterogeneity among PAH disorders classified within group 1 of pulmonary hypertension, which leads to great differences in patient response to therapy and overall survival with modern PAH therapies. As several clinical trials and registries have demonstrated, patients with idiopathic PAH have achieved greater responses to therapy when compared with patients with SSc-PAH; therefore, there is a need for effective treatment for patients with SSc-PAH.1

Investigators hypothesized that initial combination therapy with agents that have distinct targets in the pathological mechanism of PAH would improve outcomes in patients with SSc-PAH. Investigators selected 2 FDA-approved agents, tadalafil and ambrisentan, which were previously shown to have therapeutic effect by targeting different intracellular pathways responsible for PAH. Tadalafil is a phosphodiesterase type 5 inhibitor and ambrisentan is an antagonist of the endothelin A. Enrolled patients received combination therapy with 5 mg ambrisentan and 20 mg tadalafil once daily for the first 4 weeks of the study period, followed by uptitrated doses of 10 mg ambrisentan and 40 mg tadalafil once daily, if tolerated, for the duration of the 36-week study.1

The efficacy and safety of the combination therapy was evaluated in a total of 24 patients with SSc-PAH who were naïve to PAH-specific therapy. Patients enrolled had World Health Organization (WHO) functional class II or III symptoms of PAH clinical severity; the majority of the population (65%) had WHO functional class III symptoms. The defining characteristics of PAH include an elevated mean pulmonary arterial pressure (mPAP) of at least 25 mm Hg, and high pulmonary vascular resistance (PVR) greater than 3 Wood units (WU). In this study, patients had a mean baseline mPAP of 42 mm Hg, PVR of 8.4 WU, and elevated right atrial pressure of 7 mm Hg.1

Typically, clinical trials utilize the 6-minute walking distance as a measure of therapeutic efficacy on exercise capacity in patients with PAH. This end point is nonspecific for the population affected by SSc-PAH, because these patients are heavily burdened by musculoskeletal impairments. As an alternative method of measure, investigators evaluated the efficacy of combination therapy for patients with SSc-PAH by monitoring changes from baseline in the coprimary end points of PVR and RV mass over 36 weeks. These coprimary end points reflected ventricular failure and mortality outcomes in patients with SSc-PAH after tadalafil and ambrisentan treatment. Other clinical outcomes included changes in hemodynamic markers of RV structure and function after 36 weeks, including mPAP, cardiac index, PVR, and pulmonary arterial compliance (stroke volume/pulse pressure [SV/PP]). Health function was assessed by change in WHO functional class symptoms, 6-minute walking distance, and dyspnea severity after 36 weeks of combination therapy from baseline measures. The frequency and type of adverse events (AEs) were recorded over the study period to evaluate the safety of the combination treatment in patients with SSc-PAH.1

RV mass following de-remodeling of the RV was confirmed by improvements from baseline in several other secondary clinical hemodynamic measures after combination therapy. Indeed, there was a significant (P <.01) improvement in mPAP with a 28% reduction after 36 weeks of combination therapy. The mPAP reflects changes in the relationship between cardiac output and PVR, where high mPAP indicates an increased workload. The cardiac index, a measure of circulation, was improved with an increase of 27% after treatment. The RV adapts to increasing vascular load by enhancing contractility to maintain blood flow; the SV/PP ratio estimates the total arterial response of the pulmonary vascular network and indicates the ability for dilation of the vascular network in response to this right ventricular contraction. After 36 weeks of therapy, patients experienced an improvement (P <.001) of 67% from baseline in the outcome of SV/PP ratio.1

Taken together, investigators concluded that combination therapy with tadalafil and ambrisentan had induced RV de-remodeling. This is likely a direct result of decreased pulmonary vascular load, which was supported with a reduction in RV mass, along with functional and hemodynamic improvements in arterial pressure, blood flow, and cardiac function. The tadalafil and ambrisentan combination was well tolerated in patients with SSc-PAH with limited AEs, and treatment improved patient health function and symptom burden.1 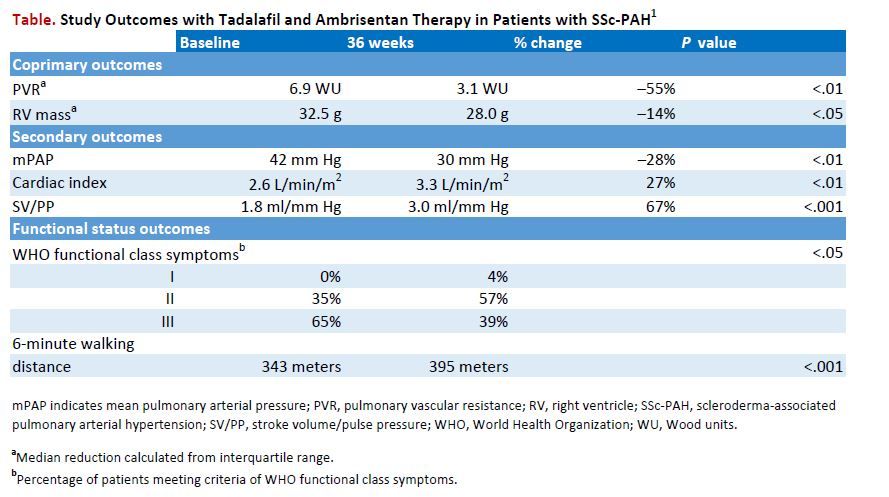