Exacerbations are episodes of chronic obstructive pulmonary disease (COPD) worsening characterized by declines in both lung function and quality of life. Minimizing exacerbation risk is 1 of the primary goals of long-term care for patients with COPD, as exacerbations increase hospitalization risk and COPD-related mortality. Current clinical treatment guidelines for patients with COPD at high risk of exacerbations recommend the combination of a long-acting beta2-agonist (LABA) with an inhaled glucocorticoid (also called an inhaled corticosteroid, or ICS) or a long-acting muscarinic antagonist (LAMA) monotherapy as first-line therapy. However, in patients with severe COPD, these first-line therapy options have demonstrated similar high rates of annual exacerbation. Thus, additional treatment options are needed to prevent COPD exacerbations in patients with severe COPD. A regimen with dual bronchodilators is a potential alternative treatment in these patients. Previously, a LABA/LAMA combination was shown to be more effective than LAMA monotherapy in reducing exacerbation rates; however, previous studies were not powered to show LABA/LAMA exacerbation benefit over LABA/ICS.1

The Effect of Indacaterol—Glycopyrronium Versus Fluticasone–Salmeterol on COPD Exacerbations (FLAME) trial investigated whether a once-daily LABA/LAMA treatment would be at least as effective as twice-daily LABA/ICS therapy in the reduction of exacerbations in patients with COPD. Investigators evaluated COPD exacerbations through electronic diaries in which patients documented symptom worsening and medication use each day. Mild exacerbations were characterized by worsening of symptoms for greater than 2 consecutive days without need for treatment. Moderate and severe COPD exacerbations were those that led to treatment with systemic glucocorticoids and/or antibiotics; in addition, to be classified as severe, exacerbations required a hospital admission or emergency department visit longer than 24 hours. From July 2013 to September 2015, the FLAME trial enrolled a total of 3362 patients with COPD 40 years and older with a history of least 1 exacerbation requiring treatment within the previous year. Nearly three quarters (74.8%) of patients had a high exacerbation risk with a high burden of symptoms, based on the 2015 Global Initiative for Chronic Obstructive Lung Disease staging system. During this 52-week trial, patients with COPD were randomized (1:1) to receive either dual bronchodilator therapy (110 μg indacaterol [LABA] and 50 μg glycopyrronium [LAMA], combination once daily) or bronchodilator plus inhaled corticosteroid (ICS) therapy (50 μg salmeterol [LABA] and 500 μg fluticasone [ICS], combination twice daily).1

With regard to the primary outcome, dual bronchodilation therapy with indacaterol and glycopyrronium was shown to be noninferior, as well as superior, to salmeterol and fluticasone treatment in reducing the annual rate of mild, moderate, and severe COPD exacerbations (Figure1). Noninferiority and superiority were achieved when the upper limit of the 95% confidence interval (CI) of the rate ratio (RR) for exacerbations was less than 1.15 and did not exceed 1, respectively. The annual rate of all COPD exacerbations was reduced by 11% in the indacaterol and glycopyrronium treatment arm compared with salmeterol and fluticasone (RR, 0.89; 95% CI, 0.83-0.96; P = .003). The rate of moderate or severe COPD exacerbations was significantly reduced by 17% (P <.001) with indacaterol and glycopyrronium treatment compared with the salmeterol and fluticasone regimen (RR, 0.83; 95% CI, 0.75-0.91).1 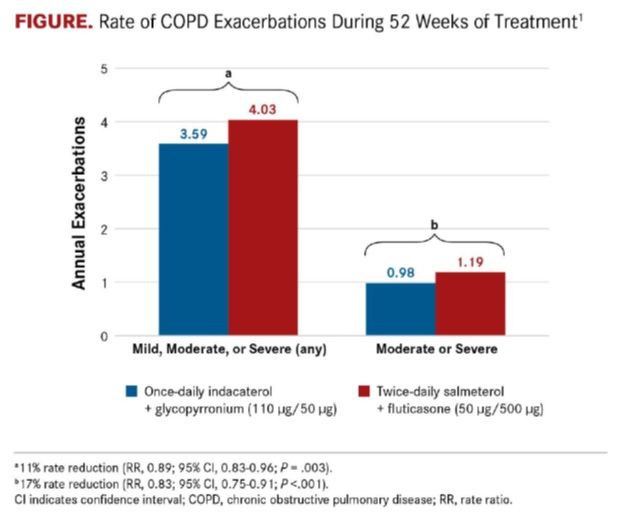 After 52 weeks of therapy, pulmonary function was assessed by the mean change from the baseline value of trough forced expiratory volume in 1 second (FEV1) between groups. Once-daily indacaterol and glycopyrronium treatment lead to significant (P <.001) improvements in lung function compared with treatment with salmeterol and fluticasone, with a mean FEV1 change of +62 mL. Health status improvement was measured by a clinically relevant decrease of at least 4 points in the total score on the St. George’s Respiratory Questionnaire for COPD (SGRQ-C) following 52 weeks of treatment, compared with baseline. A significantly higher (P <.001) percentage of patients in the indacaterol and glycopyrronium arm (49.2%) had SGRQ-C score decreases of at least 4 points compared with the salmeterol and fluticasone group (43.7%). Based on these data, investigators concluded that the combination of 2 bronchodilators improves lung function and health status to a greater degree than LABA/ICS therapy.1

FLAME study investigators concluded that the once-daily combination LABA/LAMA therapy of indacaterol and glycopyrronium was superior to the LABA/ICS combination of salmeterol and fluticasone in reducing the rate of COPD exacerbations of all severity levels, as well as in improving lung function and health status, with similar AE rates. Investigators noted that the success of this trial may have implications for current clinical guidelines and recommendations for COPD management in patients with a history of exacerbation. Future clinical trials investigating additional combinations of long-acting bronchodilators may provide further evidence of LABA/LAMA regimen superiority and support its use as first-line therapy in this population of patients with COPD.1 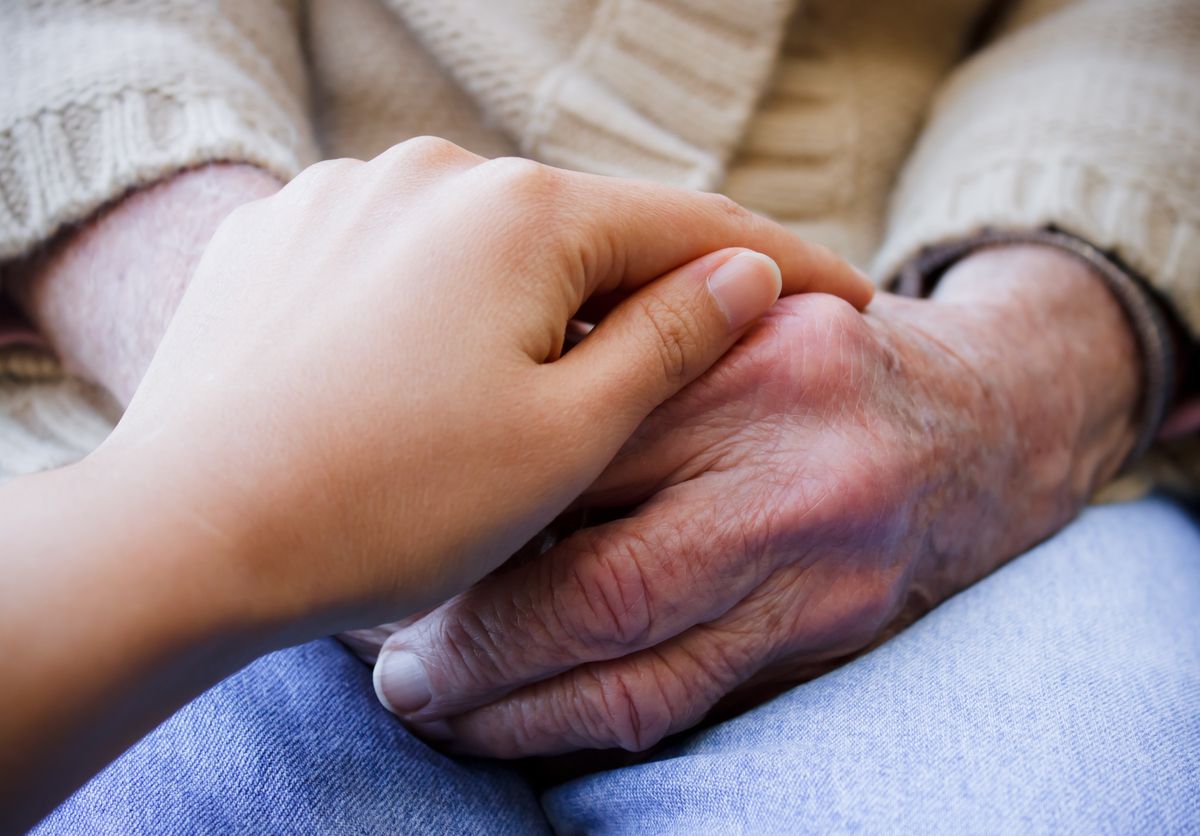 Multiple studies suggest that the mechanisms of lung damage and chronic obstructive pulmonary disease (COPD) due to biomass smoke differ from COPD caused by smoking cigarettes.

On this episode of Managed Care Cast, we speak with MeiLan K. Han, MD, MS, the author of a book released this month called Breathing Lessons: A Doctor’s Guide to Lung Health. Han, a pulmonologist, gives an inside tour of the lungs and how they work, zooms out to examine the drivers of poor respiratory health, and addresses policy changes that are needed to improve lung health.

New study findings call into question the necessity of spirometry as a criterion for participation in palliative care research among patients with chronic obstructive pulmonary disease (COPD).