Suicide Rates Increased by 30% in About Half of All States, CDC Report Finds

The CDC reported Thursday suicide rates have been rising in nearly every state between 1999 and 2016, finding that suicide rates increased more than 30% in half of states.

As the death of handbag designer Kate Spade by suicide earlier this week still reverberates, the CDC reported Thursday suicide rates have been rising in nearly every state between 1999 and 2016, finding that suicide rates increased more than 30% in half of states.

The CDC said many people dying by suicide are not known to have a diagnosed mental health condition at the time of death, in an analysis of factors contributing to suicide.

“Suicide is a leading cause of death for Americans — and it’s a tragedy for families and communities across the country,” CDC Principal Deputy Director Anne Schuchat, MD, said in a statement. “From individuals and communities to employers and healthcare professionals, everyone can play a role in efforts to help save lives and reverse this troubling rise in suicide.”

CDC researchers examined state-level trends in suicide rates from 1999-2016. In addition, they used 2015 data from CDC’s National Violent Death Reporting System, which covered 27 states, to look at the circumstances of suicide among people with and without known mental health conditions. 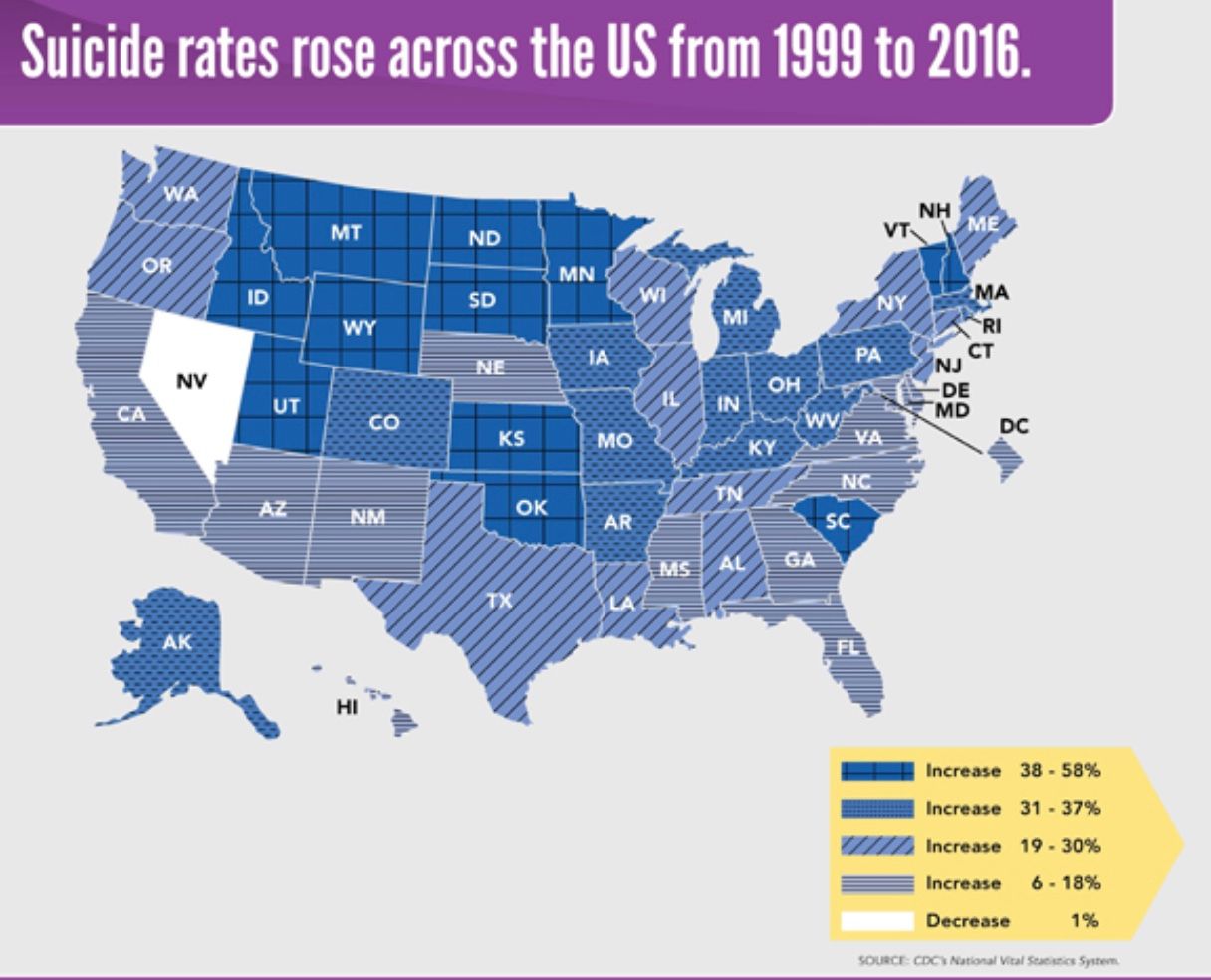 Researchers found that more than half of people who died by suicide did not have a known diagnosed mental health condition at the time of death, and suicide is rarely caused by a single factor, they said.

Factors that often contribute to risk are:

For those with known mental health conditions, 40.6% die by firearms, 31.3% by hanging/strangulation/suffocation, and 19.8% by poisoning.

In The New York Times on Wednesday, Spade’s husband, Andy, said she suffered from severe depression, for which she was seeking help for at the time of her death, and had also suffered from anxiety. The couple separated about 10 months ago but had no plans to divorce, he said.

Percentage increases in suicide rates ranged from just under 6% in Delaware to over 57% in North Dakota. Twenty-five states had suicide rate increases of more than 30%.

Suicide rates increased among both sexes, all racial and ethnic groups, and all urbanization levels.

The CDC report follows one earlier this year from the Commonwealth Fund, which described how states are falling behind on key measures of life expectancy. Suicide is considered a “disease of despair,” and the report found that combined rate of deaths from suicide, alcohol, and drug use soared 50% from 2005 to 2016.

And in 2015, Angus Deaton, FBA, who won the Nobel Memorial Prize in Economic Sciences that year, and his wife, Anne Case, PhD, published a paper showing that despite advances in healthcare, there is rising mortality from suicide and drug or alcohol use. They also noted the overall declines in self-reported states of mental health and increased financial stress, especially in the group of older, middle-aged adults noted in Thursday’s CDC report—those worried about wage stagnation and the changing dynamics of retirement savings.

The CDC suggested that comprehensive statewide suicide prevention activities are needed, although some of the CDC recommendations appear to run counter to policies pursued elsewhere within the Trump administration, such as rebuffing calls for gun control from medical groups, or reforming Medicaid to include work requirements, which some critics say may hinder access to care.

Some of the recommendations are: