The Clinical and Economic Burden of Worsening Heart Failure

The American College of Cardiology Foundation/American Heart Association (ACCF/AHA) stages of HF and the New York Heart Association (NYHA) functional classes provide different yet complementary information regarding disease status in HF (Table3-6). AHA structural stages are progressive; that is, once a patient moves to a higher stage, they cannot regress to a lower stage.3 The NYHA functional classes, on the other hand, focus on the symptomology a patient is experiencing at a given time point; thus, assignment of NYHA is more fluid and subject to change throughout the historical time course of disease.3 Phenotypical characterizations of HF (reduced ejection fraction and preserved ejection fraction) are also summarized in the Table. 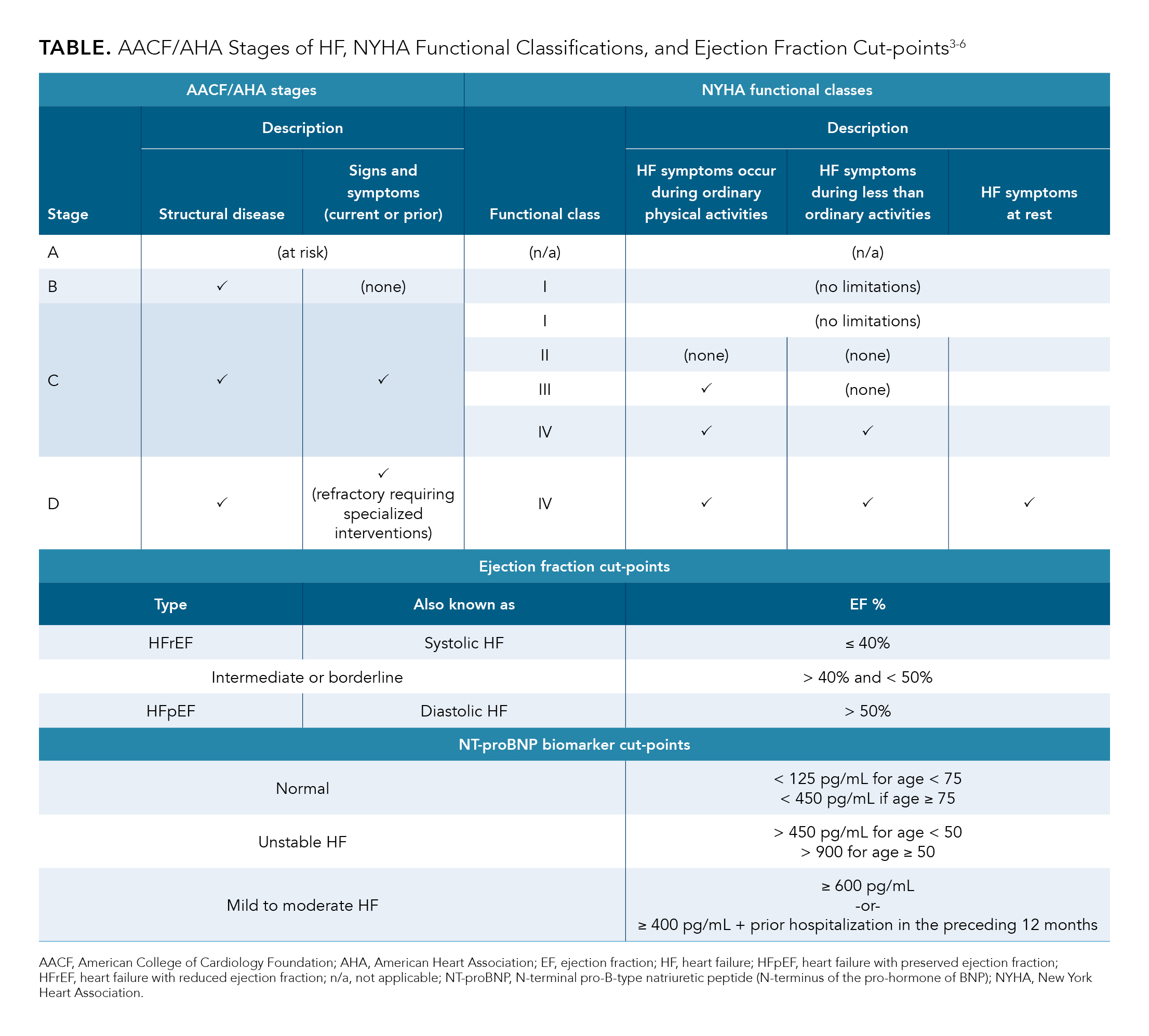 Among patients hospitalized with HF, 20% to 30% do not adequately improve during a hospitalization, according to estimates from the American College of Cardiology (ACC). These cases are known as worsening HF, which is defined as chronic HF that has progressed in signs and symptoms to the point of requiring escalation of therapy and/or hospitalization(s), and carries a very poor prognosis.7,8 This article reviews the impact of worsening HF, with a focus on the clinical and economic implications for rehospitalization.

It is not uncommon for patients with worsening HF to experience subsequent hospitalizations with increased frequency.5 Moreover, episodes of acute decompensated HF requiring hospitalizations may mark a fundamental change in the clinical disease course of chronic HF and likely indicate irreversible end-organ damage, which leaves patients with a permanently increased risk of poor outcomes.5,7

In an observational cohort analysis of patients with reduced left ventricular heart failure with reduced ejection fraction (HFrEF) (N = 11,064) identified in the PINNACLE registry of the ACC’s National Cardiovascular Data Registry, 16.7% (approximately 1 in 6; n = 1851) developed worsening HF within an average of 1.5 years from their initial diagnosis.9 In the study, worsening HF was defined as requiring at least 1 intravenous (IV) diuretic treatment in any health care setting or an HF-related hospitalization. To be considered worsening, patients were required to have received at least 30 days of initial HF therapy following their diagnosis and to have been stable for at least 90 days following their diagnosis (no EF-related emergency care, hospitalizations, or outpatient IV diuretic treatment during that 90-day window).9 Comorbidities, such as diabetes mellitus and atrial fibrillation, were significantly more common among those who developed worsening HF versus those who did not, indicating that worsening HF may be correlated with a high comorbidity burden.9

In the AHA’s 2019 update on heart disease and stroke statistics, rates of HF hospitalization or cardiovascular death in the United States were shown to be greatest among those with previous hospitalizations for HF, with an average incidence of recurrent HF-related hospitalizations reaching 6.6 per 1000 people per year.2 This same report also indicated that the age-adjusted case fatality rates after a hospitalization for HF were 10.4% at 28 days and 29.4% at 1 year.2 Similarly, the ACC cited a 1-year mortality rate following an HF hospitalization of 20% to 30%.5

The Economic Burden of Hospitalizations Linked With Heart Failure

Given the rates of hospitalization and rehospitalization, HF is associated with a significant cost burden.1,5 Approximately 1% to 2% of the total US health care budget is spent on HF, and half of that is attributable to inpatient admissions for HF.5 Thus, HF is 1 of the 6 conditions and procedures covered under CMS’ Hospital Readmission Reduction Program (HRRP) to incentivize acute care hospitals to reduce the rate of 30-day unplanned readmissions for Medicare beneficiaries.11,12 Under this program, hospitals participating in the Inpatient Prospective Payment System (IPPS), for which 30-day readmission rates for covered conditions are higher than the national average, receive a reduced reimbursement rate when treating beneficiaries.12

CMS estimates that the HRRP will save the US government approximately $563 million in fiscal year 2020 as a result of nearly 2600 hospitals receiving reimbursement penalties for excess readmissions.12 This suggests that a substantial portion of hospitals are expected to face penalties for HF and the other 5 conditions covered under HRRP. Given that the proportion of patients with HF who are aged 65 and older is projected to increase to more than 70% by the year 2030, HF hospitalization and rehospitalization costs to providers who participate in Medicare’s IPPS are expected to be substantial both now and in the future.1,13

Patients with worsening HF represent a subgroup of patients with HF who are the sickest and hardest to treat, as evidenced by their high rehospitalization and mortality rates.5 Given that HF is a covered condition through CMS’ HRRP, optimizing therapies in this patient population is beneficial for improving outcomes and lowering costs.