The Economic Impact of OFF Periods in Parkinson Disease

For author information and disclosures, see end of text.

Parkinson disease (PD) is the second-most-common neurodegenerative disease in the world,1 expected to affect at least 1.2 million people in the United States by 2030.2 An incurable, chronic disease, its economic impact can be substantial for people with Parkinson disease (PwP) and their caregivers. All PwP experience a characteristic motor syndrome of bradykinesia, resting tremor, muscle rigidity with associated gait disorder, and postural instability.1 Most patients also experience 1 or more nonmotor symptoms, including autonomic dysfunction, sleep disorders, mood disorders, bowel and/or bladder dysfunction, and cognitive abnormalities.3,4 The motor symptoms of PD can be decreased or ameliorated by symptomatic therapies, but as the disease progresses, response to therapy declines, and patients experience periods with reduced or absent symptomatic benefit, despite optimized therapeutic dosing; these are termed OFF episodes.5 No formal definition of OFF exists; however, Chou and colleagues proposed a multifactorial, practical definition of OFF, which includes a change in patients during which nonmotor and motor symptoms appear or worsen (Table).5 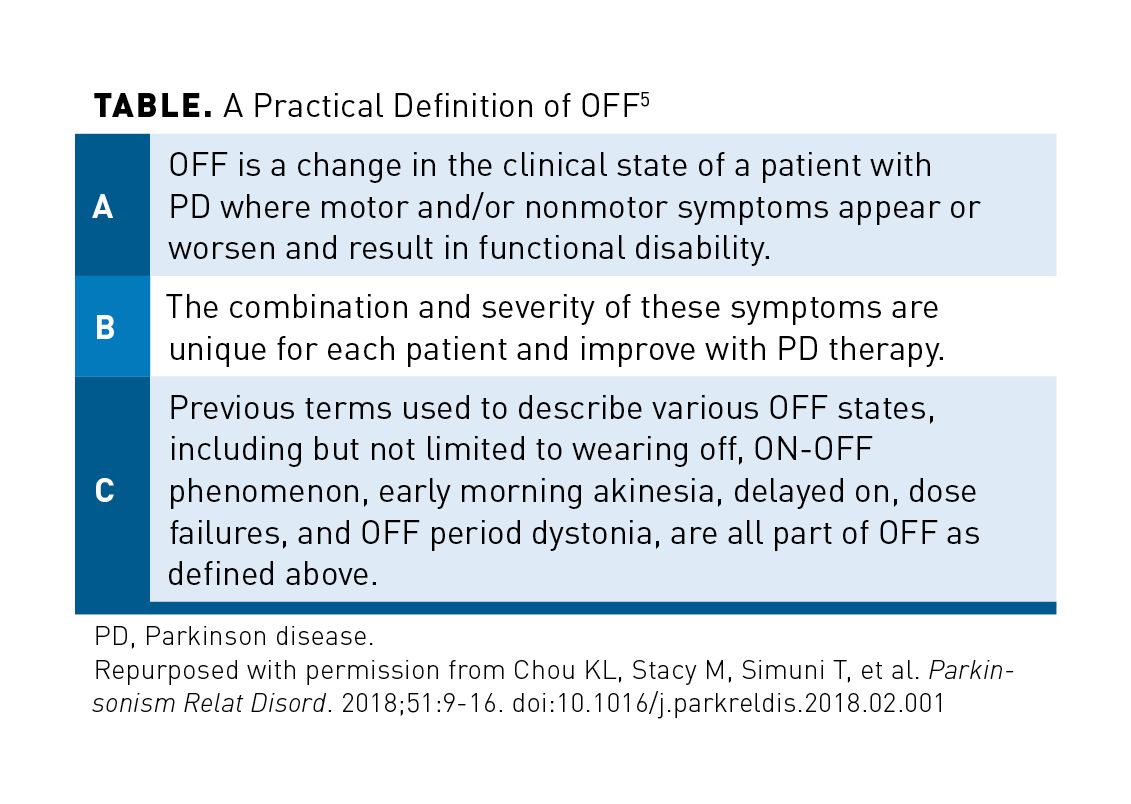 Few studies have evaluated the economic impact of OFF episodes for patients and their caregivers; however, the results of recent studies are explored herein.

PD is a disorder of mid- to late-life; incidence and prevalence rise with increasing age.1 The prevalence of PD in individuals older than 50 years is expected to more than double between 2005 and 2030 in the most populous nations, reflecting the aging of the global population.6 Other factors, such as genetics and changes in environmental risk, may further contribute to increased incidence and prevalence in the future.7,8 The incidence of PD is twice as common in men than in women in most populations.1 Applying both sex- and age-specific estimates to the US population as reported in the US Census, there were an estimated 680,000 cases of PD among individuals 45 years or older in 2010. Presuming stable sex- and age-specific prevalence, an increase to 930,000 cases is estimated to occur in 2020, with a further increase to 1.2 million cases projected by 2030.2

After 50 years of use, levodopa, the precursor to dopamine, remains the first-line and most effective oral agent (in combination with carbidopa) for managing the motor symptoms of PD.1 Early in the course of the disease, relatively infrequent levodopa dosing is associated with sustained motor benefit. Because the half-life of carbidopa/levodopa is short (about 3 hours), this sustained benefit is thought to reflect sustained central activity.10 As the disease progresses, the magnitude of benefit and the duration of response to a levodopa dose are reduced. Patients experience fluctuations in their response to therapy: Periods of good motor benefit alternate with periods of reduced motor benefit (OFF episodes). Increasing the amount of a single dose of therapy as well as more frequent dosing may temporarily provide a more sustained benefit, but can be complicated by levodopa-induced dyskinesias. Ultimately, OFF episodes return despite optimal dosing, and motor fluctuations often occur regularly over a cycle corresponding to the short plasma half-life of levodopa.5,10

In addition to altered central dopaminergic function due to progressive neurodegeneration, oropharyngeal and enteric nervous system dysfunction—with consequent dysphagia and delayed gastric emptying—can further complicate oral therapy, making response to a single dose unpredictable, often resulting in severe OFF periods or complete dose failure.5,10,11 OFF episodes are not rare: Approximately 50% of PwP experience OFF episodes within 2 years of oral levodopa treatment, nearly 70% experience OFF periods after 9 years of therapy, and essentially 100% experience OFF periods following 20 years of therapy.12,13 The effective management of OFF episodes remains a major challenge, especially as these episodes are associated with poor quality of life in patients who experience them.14

Despite the major impact of the disease on patients and their care partners, few studies have explored the economic burden of PD. The additional costs of lost income or reduced productivity for PwP and individuals involved in their care have rarely been assessed. To our knowledge, the specific relationship between OFF episodes and the economic burden of PD has not been fully studied.

In 2019, the Michael J. Fox Foundation (MJFF) and the Parkinson’s Foundation commissioned the Lewin Group to perform a comprehensive assessment of the economic impact of PD from a societal perspective, in order to gain a better understanding of the economic consequences of an increasing population of PwP in the United States to better inform health care utilization decision making.15

For the prevalence-based study, Yang and colleagues utilized data from multiple sources, including the Medical Expenditure Panel Survey (MEPS), Medicare Current Beneficiary Survey (MCBS), de-identified Optum Normative Health Information data, and Medicare Standard Analytical File claims data, US Census Bureau population projections, and Centers for Disease Control and Prevention Wide-ranging Online Data for Epidemiological Research to estimate the medical (both direct and indirect) and nonmedical costs of PD in the United States.15 The results of an original electronic primary survey completed by participants in Fox Insight, an MJFF for Parkinson’s Research study, and the Unified Parkinson’s Advocacy Council also were utilized to further understand the indirect costs of PD. Data from the MCBS and MEPS were used to estimate the prevalence of the disease.15

Based on an estimated US population of 1.04 million PwP, the total economic burden of PD was estimated to be nearly $52 billion in 2017.15 This total was composed of $25.4 billion in direct medical costs and $26.5 billion in indirect and nonmedical costs (including lost future earnings due to premature death, reduced employment, disease-related motor vehicle and home modification, nonmedical care paid daily, and other costs).15 For comparison, total costs for Alzheimer disease were estimated to be $259 billion in 2017 (based on a population of ~5.5 million individuals with the disease).16

More than $6.5 billion of the indirect and nonmedical costs were due to reduced employment, reduced productivity, and absenteeism of unpaid care partners of PwP.15 In 2017, excess direct medical costs for patients were, on average, $24,439 higher than costs for a person of similar age, sex, and race/ethnicity without PD, with similar insurance. Total average estimated indirect and nonmedical costs per patient were $25,558; this total includes combined losses from PwP and up to 2 caregivers (unpaid primary and/or secondary).15

The personal and societal economic burdens associated with PD were found to be much higher than those found in prior reports, likely reflecting, at least in part, the more extensive assessment of indirect and nonmedical costs identified by the patients who were surveyed. Estimated earnings losses associated with reduced employment of PwP and their caregivers due to PD was $1.87 billion and $802 million, respectively. Absenteeism amounted to annual losses of $1.4 billion and $3.7 billion for PwP and their primary caregivers, respectively.15 Using average earnings data collected from the Fox Insight electronic primary survey, the investigators estimated annual earnings lost due to presenteeism to be $1.3 billion for PwP and $1.7 billion for their caregivers. Lost earnings as a result of premature death in PwP were estimated at $2.5 billion annually overall and $2418
per PwP per year.15 Of all indirect costs estimated in the study for both PwP and their caregivers combined ($14.2 billion), the combined PwP and caregiver absenteeism costs provided the largest cost contribution at $5.1 billion, followed by presenteeism ($2.9 billion) and earnings losses related to reduced employment ($2.7 billion).15

These findings are likely underestimates of the true economic burden of PD. Patients who have not received a diagnosis, those without health insurance, and those in insurance plans that do not report individual costs by diagnosis are not completely represented.15 Additional indirect and nonmedical costs may not have been captured. Nonetheless, these findings provide important new insights into the total economic burden of PD, and they provide an excellent starting point for future studies, including the investigation of the (nonmedical) economic impact of OFF episodes in PwP.

Nonmedical Economic Burden of OFF Periods

Up to 100% of PwP will develop OFF periods at some point during their disease process.12,13 Patients who experience OFF periods also experience multiple stressors related to decreased ability or inability to work, increased dependence on caregivers, and increased health care needs. In a cross-sectional study by Stocchi and colleagues, conducted in Italian movement disorders centers, wearing-off episodes were identified in nearly 42% of PwP with early-stage disease (<2.5 years since diagnosis), and particularly in this stage, episodes of wearing off were underestimated by clinicians.14 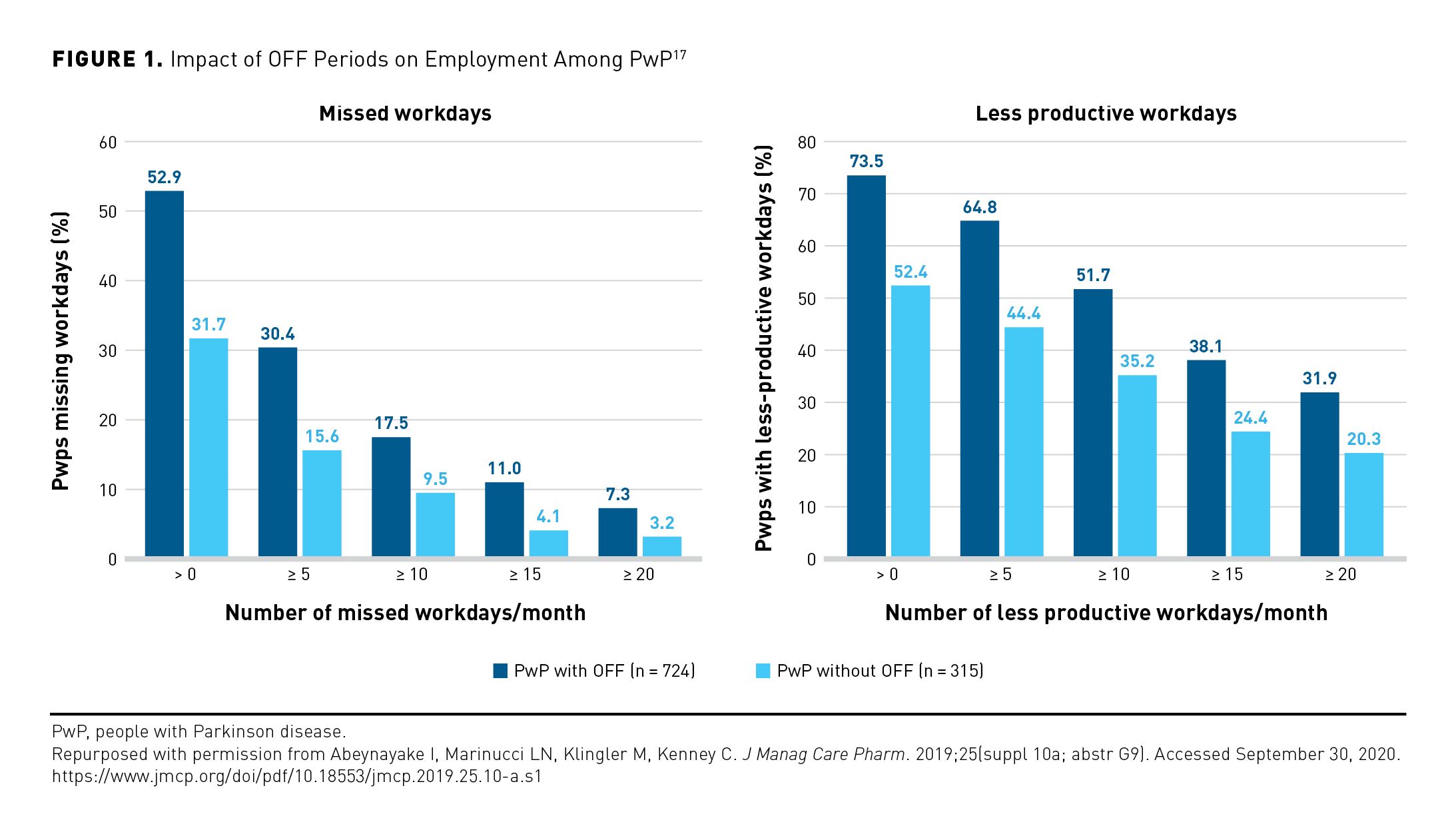 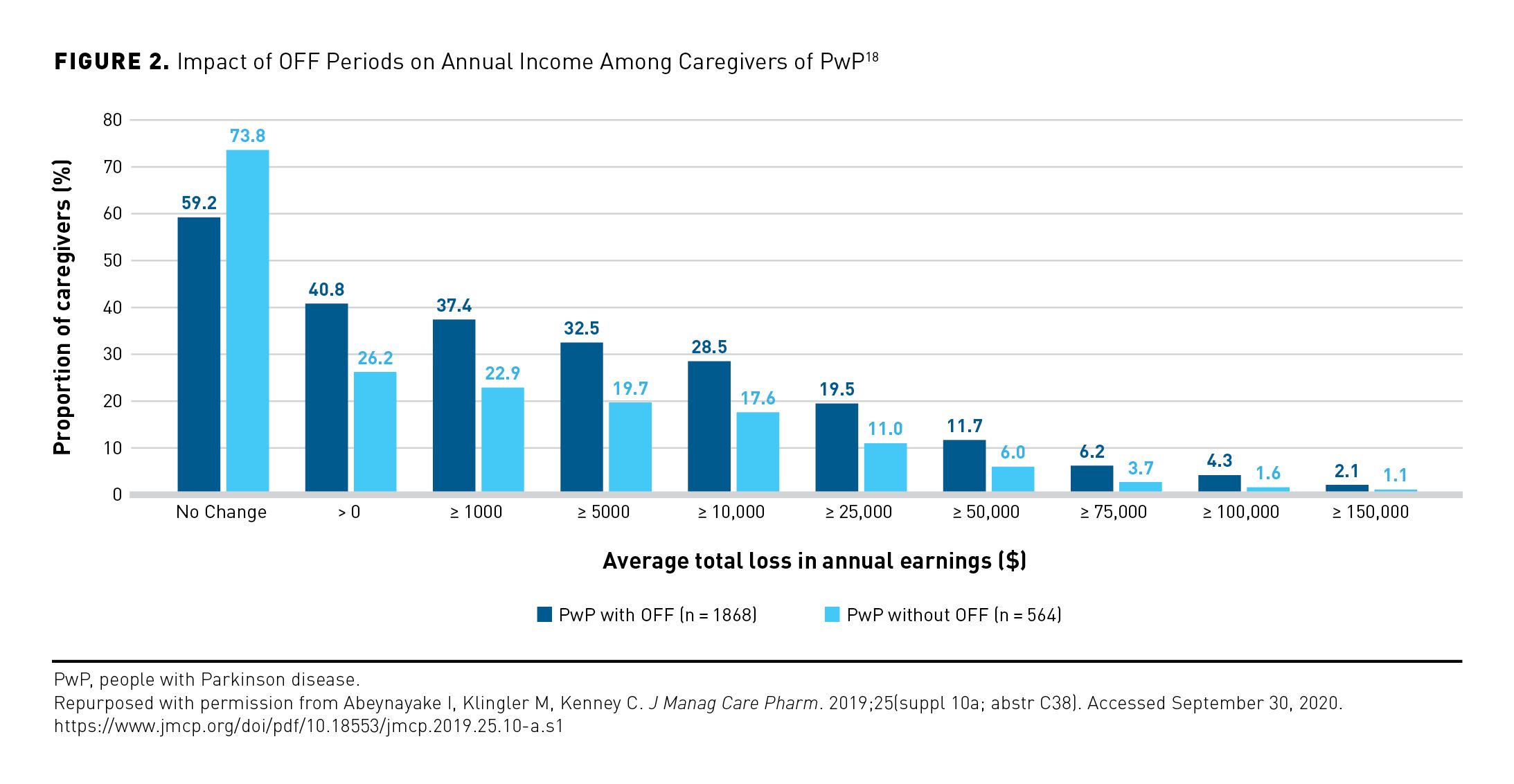 These findings align with current understanding of the effects of OFF periods, which are inevitable for most PwP. The data from these studies indicate that PwP who experience OFF periods, as well as their caregivers, are likely incurring higher indirect costs, in the form of losses of earnings, employment, and opportunities, as well as decreased productivity, which in turn increases the societal-level economic burden.

Current treatment approaches do not ameliorate OFF episodes in most patients. Effective management of OFF periods is an unmet need with personal and societal implications. Ultimately, improved treatment of OFF episodes may contribute to increased work productivity, decreased burden on caregivers, and fewer dollars lost due to PD.

Funding Source: Financial support for this work was provided by Acorda Therapeutics.