Objectives: This study examined the relationship between medication adherence, cost sharing measured as out-of-pocket spending, and total annual spending in Medicare beneficiaries with type 2 diabetes (T2D) to evaluate whether pharmacy cost-sharing programs have the potential to decrease adherence. These programs may unintentionally increase the risk of medical complications and may result in higher spending overall.

Methods: Medication adherence was measured as proportion of days covered over the first 12 months of observation. Spending and adherence outcomes were defined in deciles.

Conclusions: This study describes a widespread variation in medication adherence, pharmacy cost sharing, and medical spending in a sample of Medicare beneficiaries with T2D. We found that lower adherence was correlated with higher cost sharing in the Medicare population, perhaps because of unobserved confounding factors. However, the existing literature on patients with employer-sponsored insurance suggests some of this correlation may be indicative of causal relationships.

In 2014, nearly 30 million Americans (9.3%) were living with diabetes, including an estimated 11.2 million who were 65 years or older.1 In 2012, the total national spending on diabetes was $245 billion, including $176 billion in direct medical spending. Patients 65 years or older use more healthcare services than younger patients and incur the majority of costs associated with diabetes. Ultimately, the Medicare program—in which 28% of beneficiaries have diabetes&mdash;bears most of this burden.2 Interventions targeted at individuals using the most resources and who have the greatest expenditures have the potential for a disproportionate impact on spending.

Although cost sharing may reduce overall pharmacy spending, it could also have consequences for patient health and result in unintended increases in nonpharmacy healthcare spending, thereby offsetting the savings on pharmaceuticals. The limited existing research shows that cost sharing increases emergency department visits and hospitalizations, especially among chronically ill patients.4 The impact of cost sharing on therapeutic adherence is particularly relevant for patients with diabetes, given that improved adherence is associated with a greater likelihood of reaching glycated hemoglobin (A1C) targets—the primary measure of effective disease management15—and cost sharing has increased since the introduction of Medicare Part D.16 By some estimates, a 1% increase in antidiabetes prescription utilization would reduce medical spending for Medicare beneficiaries with T2D by 0.83%.17

Despite the large overarching financial burden of T2D, few studies have examined the extent to which pharmacy and medical spending contribute to total diabetes-related spending.18,19 This retrospective claims study of a Medicare population examined the relationship between adherence, cost sharing as measured by out-of-pocket (OOP) spending, and total annual spending.

The study used claims data for a 20% random sample of age-eligible Medicare fee-for-service beneficiaries for the years 2006 to 2009. Data were acquired from the CMS Medicare Research Identifiable Files, which provide medical and pharmacy claims, including diagnoses, procedure codes, and measures of charges and spending. Overall spending in any category (total healthcare, medical, or pharmacy) equaled the sum of the patient OOP component and the payer-covered component.

Adherence was measured as the proportion of days covered (PDC), a well-established method that has been used for several decades to evaluate adherence in diabetes and other chronic conditions (eg, cardiovascular disease, dyslipidemia, hypertension).6,20-24 PDC was calculated as the total number days when a patient had medication on hand during the observation window (ie, date of first claim to exhaustion of last prescription, segmented into calendar years).

Based on the inclusion and exclusion criteria, the sample included 12,305 patients with a mean follow-up period of 3.2 years and a mean age of 74.4 years. The sample was 64% female and 36% male.

Patient age and sex were similar across all total annual deciles of spending; however, patients in the upper deciles were substantially more likely to have comorbid conditions, including congestive heart failure (74% in the 10th decile vs 17% in the 1st decile), cardiac arrhythmias (68% vs 24%), complicated hypertension (57% vs 17%), or moderate/severe renal impairment (18% vs 1%), among others. The use of certain antihyperglycemic drug therapies was also more prevalent in the upper deciles of total spending. Compared with patients in the 1st annual spending decile, patients with T2D in the 10th decile had a nearly 5-fold higher probability of using long- or rapid-acting insulin to treat their diabetes (31%-34% vs 3%-7%, respectively). Dipeptidyl peptidase-4 inhibitors, meglitinide, and thiazolidinedione use was also higher for patients in the upper deciles of total annual spending, whereas metformin (a biguanide) use was less common in the 10th versus 1st decile (31% vs 53%). Use of sulfonylureas and glucagon-like peptide-1 receptor agonists did not vary significantly across the deciles of total annual spending.

Distribution of Spending by Adherence

An analysis of comorbidities and medication use according to total spending showed that patients in the highest deciles were more likely to have comorbid conditions and to use certain antidiabetes drugs (in particular, long-acting, short-acting, and premix insulins). It is likely that the differences by decile in the prevalence of diabetic comorbidities, complications, and therapy utilization in patients play a large role in driving healthcare spending variation. This finding is supported by existing studies.19,25

This study also examined the distribution of total, medical, and pharmacy spending in Medicare patients with T2D based on their level of medication adherence. More adherent patients had substantially lower total spending and medical spending, but moderately increased pharmacy spending, suggesting that, for Medicare patients with T2D, lower adherence is related to increased spending in general. Increased spending may be the result of poorer outcomes, increased comorbidities, and a need for additional treatment, as medication adherence has been significantly associated with improved health status, fewer complications, and less medical resource utilization in patients with T2D.15,26-28

This study corroborates previous research and suggests that increasing adherence among Medicare beneficiaries with T2D could generate significant cost savings.17 The use of pharmacy cost sharing in Medicare has gone up since the introduction of Medicare Part D, which extended pharmacy benefit coverage and increased pharmaceutical utilization,29 but the availability of generic drugs has prevented significant increases in OOP spending. If this cost-sharing trend continues, adherence may fall and any savings on pharmacy spending could be offset by increased medical spending.16 Recent proposals to limit annual OOP spending for Medicare beneficiaries would reduce the financial burden on high-spend Medicare beneficiaries with T2D, potentially improving medication adherence and health outcomes.30

This study has certain limitations. The analysis was descriptive, with data randomly drawn from an administrative claims database representing the years 2006 to 2009. Although the levels of pharmacy and medical spending may have changed since 2009, our qualitative results and the correlations between cost sharing, adherence, and medical spending should not be impaired by the age of the data, as many similar studies have found the same relationships in other patient samples and time periods.4-14 Additionally, because the study drew from the Medicare database, and because only patients 65 years or older at the time of the first observed T2D diagnosis claim were included, the mean age of the sample (74 years) was higher than the average age of T2D diagnosis (54 years) in the United States.31 Last, only limited medical history is available for patients in claims data research, thereby increasing the potential for confounding, and the date of patients’ initial T2D diagnosis could not be determined with certainty.

This study has several implications. First, the study results demonstrates the existence of a skew in spending on T2D treatment. Medicare patients in the highest deciles of total spending had dramatically higher total and medical spending, clearly indicating that most spending on diabetes-related treatment is from medical—and not pharmacy&mdash;spending among a subset of high-cost patients. In addition, the study expands on available studies of patients with employer-sponsored insurance to demonstrate that improved adherence is related to reduced resource use and spending in Medicare beneficiaries with T2D and suggest that interventions aimed at improving adherence among high-cost patients have the greatest potential to reduce health expenditures. Most importantly, the study results confirm the negative connection established in the existing literature between cost sharing and medication adherence, which varied widely among Medicare beneficiaries with T2D.4-14 If pharmacy cost-sharing programs decrease medication adherence, initiatives that promote pharmacy cost sharing may unintentionally increase the risk of medical complications offsetting some (or in targeting cases, all) of the savings associated with lower pharmaceutical spending.&ensp;

Source of Funding: This study was supported by AstraZeneca.

Author Disclosures: Dr MacEwan, Mr Sullivan, and Ms Peneva are employees of Precision Health Economics (PHE), which is a consultant for biotech/pharma companies and was compensated by AstraZeneca to perform the study. Dr Vanderpuye-Orgle was an employee of PHE during the time of the study and is currently employed by Amgen. Dr Yin is a consultant for PHE. Dr Sheehan has been employed by AstraZeneca, and Dr Kalsekar has been employed by and holds stock in AstraZeneca and Johnson & Johnson, which manufacture drugs for the treatment of diabetes. Dr Peters has been a consultant and grant recipient from numerous pharmaceutical companies including AstraZeneca, and receives editorial fees from Medscape.

Download PDF: The Relationship Between Adherence and Total Spending Among Medicare Beneficiaries With Type 2 Diabetes 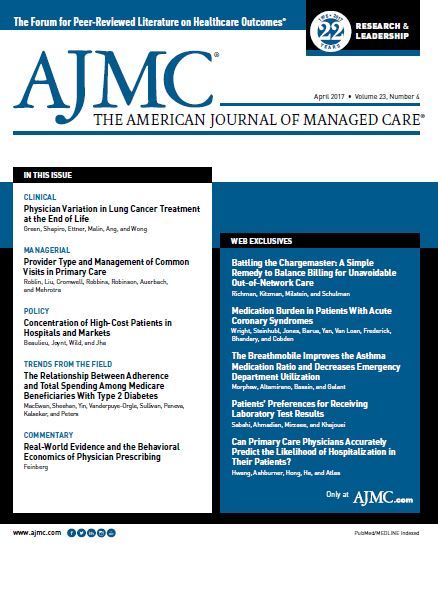 Battling the Chargemaster: A Simple Remedy to Balance Billing for Unavoidable Out-of-Network Care
Real-World Evidence and the Behavioral Economics of Physician Prescribing
Physician Variation in Lung Cancer Treatment at the End of Life
Provider Type and Management of Common Visits in Primary Care
Concentration of High-Cost Patients in Hospitals and Markets
Medication Burden in Patients With Acute Coronary Syndromes
The Relationship Between Adherence and Total Spending Among Medicare Beneficiaries With Type 2 Diabetes
Patients' Preferences for Receiving Laboratory Test Results
The Breathmobile Improves the Asthma Medication Ratio and Decreases Emergency Department Utilization
Can Primary Care Physicians Accurately Predict the Likelihood of Hospitalization in Their Patients?
Related Videos
Related Content