As the CEO and founder of Lifely Insights, Mandi Bishop is bringing life context to healthcare decision making with actionable social and behavioral determinant insights, helping communities partner with health systems and payers to tailor and optimize health management program design, care plans, interventions, and engagements. An open data evangelist, she is a recurring steering committee member for Health Datapalooza, and is the co-chair of nationwide HealthIMPACT Forum events. She has been a founding, and returning, social media ambassador for both the HIMSS and AHIP national conferences. Additionally, she is an advisory board member of the Society for Participatory Medicine and #STEMPrincess organizations, a contributor to The American Journal of Accountable Care and Tincture, and co-host of the Managed Care Cast podcast series for The American Journal of Managed Care.

Taking health care coverage away from people is easy.

Creating coverage for people is hard. We did the hard.

As we approach the January 20 inauguration of Donald J. Trump as the 45th president of the United States, we come to the end of an all-too-brief era of unparalleled government transparency and leadership accessibility: Acting Administrator of CMS Andy Slavitt will be stepping down from his post. Although his time in the CMS top spot limelight was brief, it was tremendously impactful.

Radio host in Brownwood, TX: "I've been critical of O'care, but I have 2 admit it's been a good deal 4 me."

During his tenure, approximately 20 million people have obtained health insurance coverage under the Affordable Care Act (ACA), with the rate of uninsured Americans falling to an all-time low of 8.6% in the first quarter of 2016, according to the National Center for Health Statistics’ Health Interview Survey.

While the general American public may not be aware of these historic successes—as they are overshadowed by the premium increase headlines—many of us in the trenches of the healthcare system recognize their significance, and celebrate the life-saving opportunities afforded to so many by programs Andy brought to fruition. 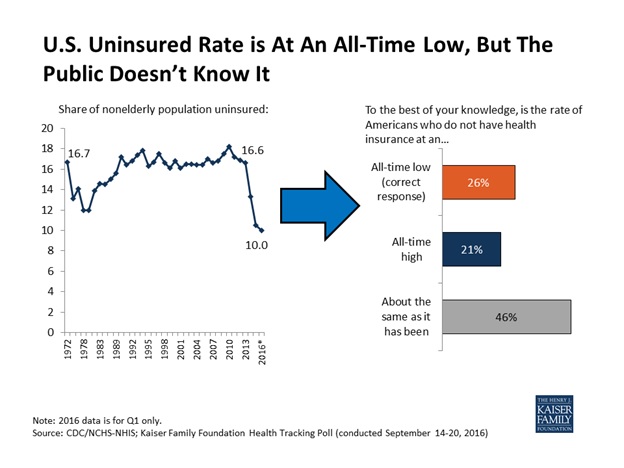 Andy acknowledged, and frequently lamented, this disconnect between public perception and reality, and he worked to “bring policy to the kitchen table” through frequent engagements on social media.

Remember lifetime caps on health insurance before the ACA. To be clear, a "lifetime" often meant 5 years of life. pic.twitter.com/z56MZYZSra

Beyond cultivating the growth of ACA beneficiary numbers with his avid support and diligence, Andy was instrumental in enacting the bipartisan-supported Medicare Access and CHIP Reauthorization Act (MACRA) that replaced the maligned Sustainable Growth Rate reimbursement program. MACRA’s core tenet is driving health system transformation from a fee-for-service based payment model to value-based care payment programs. Unlike the ACA, MACRA legislation is projected to remain intact in the new administration, but uncertainty about MACRA’s regulation is likely to persist long into the into the first reporting period of 2017. For his successor, Andy has words of wisdom to impart regarding how it is implemented and regulated:

“MACRA is a vision that sets the stage for the next evolution of Medicare. If someone’s view is that it’s a highly-rigid scorekeeping system, it will not be successful. If we look at this as an opportunity to give people back the relationship between patients and physicians—create custom and bespoke models that reimburse the way physicians think they ought to be reimbursed—it will be transformative.”

What you may not know about Andy: his path to ACA fulfillment was set in motion decades ago, when he first became involved in the healthcare industry by founding a company based on the notion of being able to give people access to affordable care when they’re underinsured or uninsured. His inspiration to leave a lucrative career in finance and delve into the inner workings of healthcare? A personal tragedy compelled him to action: the death of his best friend, and the nightmarish aftermath for the family. Years later, he acknowledges that this early experience continues to inform his focus and approach to policy matters. He never wants “patients to feel like they’re the victims of the solution,” and feels a “huge obligation to educate the patients and to let the patients educate us.”

This sense of obligation to the patients shaped his roles as a public servant: “Policy work is so visible, but this job is really a service job—day-to-day service to 140 million Americans that unites the work we do.” Our nation has been lucky to have him. His administration’s accomplishments will be remembered, and he will be missed.

Have led orgs of thousands in private & public sector & no one can touch the Fed career workforce. I will miss them. https://t.co/tCOBJH4UJr

Thank you for your years of service to us, Andy. You made a difference.