Mary Caffrey
Shantanu Agrawal, MD, MPhil, pursued the use of analytics to prevent and identify fraud in public healthcare programs. He takes the helm of a 16-year-old group that has worked to bring consensus among stakeholders on what in healthcare should be measured. 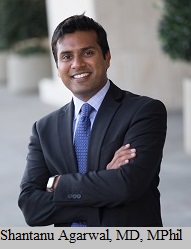 Shantanu Agrawal, MD, MPhil, a former top official with CMS, will be the new president and CEO of the National Qualify Forum (NQF), the organization announced Wednesday. He will become CEO January 30, 2017.

Agrawal served as deputy administrator and director of the CMS’ Center for Program Integrity (CPI), which led CMS’ anti-fraud and abuse efforts and managed audits and for providers and contractors in Medicare, Medicaid, and the Children’s Health Insurance Program. He succeeds Helen Darling, MA, who served as interim president of NQF after the last permanent president, Christine Cassel, MD, left for a leadership role at the new Kaiser Permanente School of Medicine.

“Shantanu understands the importance of advancing quality and patient safety both from the frontlines of medicine and from a national policy perspective,” Bruce Siegel, MD, MPH, NQF board chair and president and CEO of America’s Essential Hospitals, said in a statement. “He is the innovative, passionate, focused visionary that NQF needs now to ensure that we respond strategically and effectively to the nation’s dynamically changing healthcare landscape.”

NQF is a not-for-profit, nonpartisan organization founded 16 years ago to build consensus among stakeholders on standards that would be used to measure and report on quality of healthcare in the United States. The group works closely with CMS to help set priorities on what aspects of care need measurement and to craft the details of those measures.

In his statement, Agrawal said NQF’s mission is more important than ever. “I am honored to lead NQF during this exciting and pivotal time. I look forward to working with our more than 430 member organizations to prioritize and streamline the best measures of quality, ensure that areas in need of good measures have them, and push for the effective, high-value care providers want and patients deserve.”

Agrawal is credited with working to reduce physicians’ administrative burdens with Medicare and for taking part in CMS’ response to the opioid epidemic. Several high-profile fraud crackdowns were announced on his watch, including a nationwide sweep in June 2016 that covered about $900 million in false billings. CMS also stepped up its fraud prevention efforts through the use of data to identify patterns of abuse, savings Medicare and Medicaid $42 million from 2012-2014. However, just this month Republicans criticized CMS for failing to recover millions in potential overbillings in Medicare Advantage, through “up coding.”

He had served as CPI’s chief medical officer and expanded the use of analytics to evaluate the quality of care, and led a public-private partnership between CMS and private payers called the Health Care Fraud Prevention Partnership.

Before CMS, Agrawal worked with senior leadership of hospitals, health systems, and pharmaceutical companies in his role as a consultant with McKinsey & Company. He previously served as the leader for clinical innovation and efficiency at a full-risk, capitated delivery system, according to the NQF statement.