The coverage gap in the Medicare Part D program has a significant negative impact on adherence to diabetes medications.

The sample included 12,881 Medicare Part D beneficiaries with diabetes who entered the coverage gap in 2008. Sample patients had 3 different levels of coverage in the donut hole: no coverage, generic drug coverage only, and both generic and brand-name drug coverage. Adherence was measured by the proportion of days covered. We used a difference-in-difference model to evaluate the effect of coverage gap on adherence.

The coverage gap in the Medicare Part D program has a significant negative impact on medication adherence among beneficiaries with diabetes. Availability of brand-name drug coverage in the donut hole is critical to adherence to diabetes medications.

The Medicare Part D coverage gap has a significant negative impact on adherence to diabetes medications.

The Medicare Part D program, introduced on January 1, 2006, provides prescription drug coverage for Medicare beneficiaries. One unique feature of the Part D benefit design is the coverage gap (or donut hole). The defined standard benefit in 2008 started with a $275 deductible and a 25% copayment for drug spending between $275 and $2510. After the initial coverage period, beneficiaries entered a coverage gap, in which they paid 100% of the drug cost, until their true out-of-pocket drug spending reached the catastrophic limit of $4050 (or total drug spending of $5726.25). Under the catastrophic coverage, beneficiaries pay the greater of a 5% or a $2.25/$5.60 (generic/brand-name) copayment.

The donut hole is a controversial component of the Part D design because a lack of benefit may negatively impact patients’ drug utilization and subsequent clinical outcomes. Studies have shown that beneficiaries of private drug benefit plans with annual benefit limits are more likely to discontinue their medications and have a higher rate of hospitalization compared with beneficiaries who have no benefit limits.1,2 Sun et al reported that the donut hole was associated with reductions in medications used for potentially disabling and life-threatening conditions.3 Another study by Zhang et al indicated that beneficiaries with no coverage in the donut hole decreased their use of monthly prescriptions by about 14%.4

In this study, we examine the effects of the Part D coverage gap on adherence to diabetes medications. We focused on diabetes because diabetes is a serious chronic medical condition with considerable morbidity and mortality. The prevalence rate of diabetes is high among senior citizens (23.1%), compared with 7.8% in the US population.5 In 2007, over half of the $174 billion economic cost of diabetes was attributed to people 65 years and older, and a large portion of these costs were borne by Medicare.6

Previous studies on the Part D coverage gap generally used the number of prescriptions filled as the outcome variable.3,4 It is difficult to link the number of prescriptions with important outcomes such as hospitalizations and glycosylated hemoglobin (A1C) levels to help decision making in Part D benefit design. Our research focused on adherence to diabetes medications, a critical component in the management of diabetes. Aggressive glycemic management, as measured by A1C, can reduce long-term complications7 and medical costs associ-ated with diabetes treatment.8,9 Poor adherence to diabetes medications is a major contributor to unsatisfactory glycemic control10-13 and increases the risk of adverse health events associated with diabetes.14-16 Inadequate adherence to diabetes medications in the donut hole could have serious long-term consequences for both Medicare and Medicare beneficiaries.

This study is a retrospective cohort analysis based on prescription drug claims data provided by MedImpact Healthcare Systems, Inc, a national pharmacy benefit management company. Compared with the national data, Part D beneficiaries in MedImpact had the same sex distribution but were less likely to be under age 65 years ().

The sample in this research included patients over age 65 years who were continuously enrolled in a Medicare Part D plan from January 1, 2007, to December 31, 2008, and had at least 2 diabetes medication claims in each year. This study required patients to use diabetes medications in 2007 to ensure that all patients had used diabetes medications prior to the study period, January 1, 2008, to December 31, 2008. Utilization data in 2007 were used to acquire comorbidity information. Patients who received low-income subsidies for their premium and copayment were excluded from the sample because of their unique benefit structure.

Part D patients can have different types of Part D plans, including the defined standard benefit (DSB) plan, the actuarially equivalent (AE) plan, the basic alternative (BA) plan, and the enhanced alternative (EA) plan. The AE and BA plans are equivalent to DSB plans in value and do not provide coverage in the donut hole. The EA plans charge a supplemental premium and provide supplemental benefits. Many EA plans cover either generic drugs only or both generic and brand-name drugs as supplemental benefits.

The outcome measure of interest was adherence to diabetes medications. In this analysis, adherence to diabetes medications was measured by the proportion of days covered (PDC), calculated as the number of days covered by at least 1 diabetes medication in a certain period of time, divided by the number of days in that period. To calculate a PDC, each day in that period was evaluated as covered or as not covered by a medication based on fill date and days of supply. If a new claim for the same diabetes medication occurred before the end date of the last claim, the starting date of the new claim was pushed forward to the end date of the last claim. We calculated 2 PDCs for each patient: one for the period before reaching the coverage gap (pregap PDC) and the other for the period after reaching the coverage gap (postgap PDC). Patients with a PDC of 80% or more were classified as adherent.10,14-18 In addition to a dichotomous adherence variable, we used continuous PDC as the outcome variable to test the robustness of the results.

created for the analysis.

presents the patients’ characteristics. The average age for the entire sample was 74.97 years, and 48.06% of patients in the sample were male. A typical patient spent around 104 days in the donut hole. The vast majority of patients in the sample lived in the Midwest (82.85%). The most significant comorbidities were hypertension (87.41%), hyperlipidemia (81.54%), and heart disease/hypertension (69.47%).

We performed a robustness analysis by using continuous PDC as the outcome variable. When the outcome variable was continuous PDC, patients with no coverage had a 9.8 percentage point drop in PDC (P <.0001, 95% CI = -11.5, -8.1), whereas patients with generic coverage had only an 8.6 percentage point drop in PDC (P <.0001, 95% CI = -10.2, -7.0) compared with patients with full coverage. The difference between no coverage and generic coverage only also was statistically insignificant (P = .2449).

This research also showed that offering only generic coverage in the donut hole may have a limited impact on improving patients’ adherence to diabetes medications. Compared with patients with no coverage, patients with generic drug coverage had higher adherence levels, but the difference was not statistically significant. The availability of brand-name drug coverage in the donut hole is important to maintain patients’ adherence to their diabetes medications. The reason may be that brand-name medications play a critical role in the treatment of diabetes. Currently, thiazolidinediones (TZDs), glucagon-like peptide-1 (GLP-1) agonists, dipeptidyl peptidase-4 inhibitors, and insulin are predominately brand-name medications, whereas generic substitutions are readily available for metformin and sulfonylureas. The current type 2 diabetes treatment algorithm from the American Diabetes Association and the European Association for the Study of Diabetes recommends metformin for first-line pharmacotherapy. If patients cannot lower their A1C to 7% or below within the first 2-3 months, then they need to upgrade to combination medications such as metformin + basal insulin, metformin + sulfonylurea, metformin + TZD, or metformin + GLP-1 agonist. If patients still cannot reach their A1C goal, metformin + intensive insulin should be considered.21 Because many patients with diabetes in Part D are senior citizens, most of them may have progressed beyond the first-line pharmacotherapy treatment and need brand-name medications including TZD, GLP-1 agonists, and insulin to maintain A1C control. Consequently, the lack of coverage for brand-name medications has a large impact on the treatment of diabetes.

This research has several limitations. First, this research is based on data from 1 pharmacy benefit management company and the findings may not be necessarily generalized to other populations. Second, this analysis relies exclusively on pharmacy claim data. Although pharmacy claim data are useful to examine medication adherence, we cannot examine the potential impact of coverage gap on other important clinical outcomes such as A1C level and diabetes-related hospitalizations. In addition, we cannot differentiate type 1 and type 2 diabetes because of the lack of medical claim data. Data on duration of diabetes also are not available. Third, adherence to diabetes medication is only part of diabetes management. The impact of the donut hole on other aspects of diabetes management such as self-management is unclear. Further analysis is needed to understand the effect of coverage gap on hospitalization risks and A1C control for Part D beneficiaries with diabetes.

Funding Source: The authors report no external funding for this research. 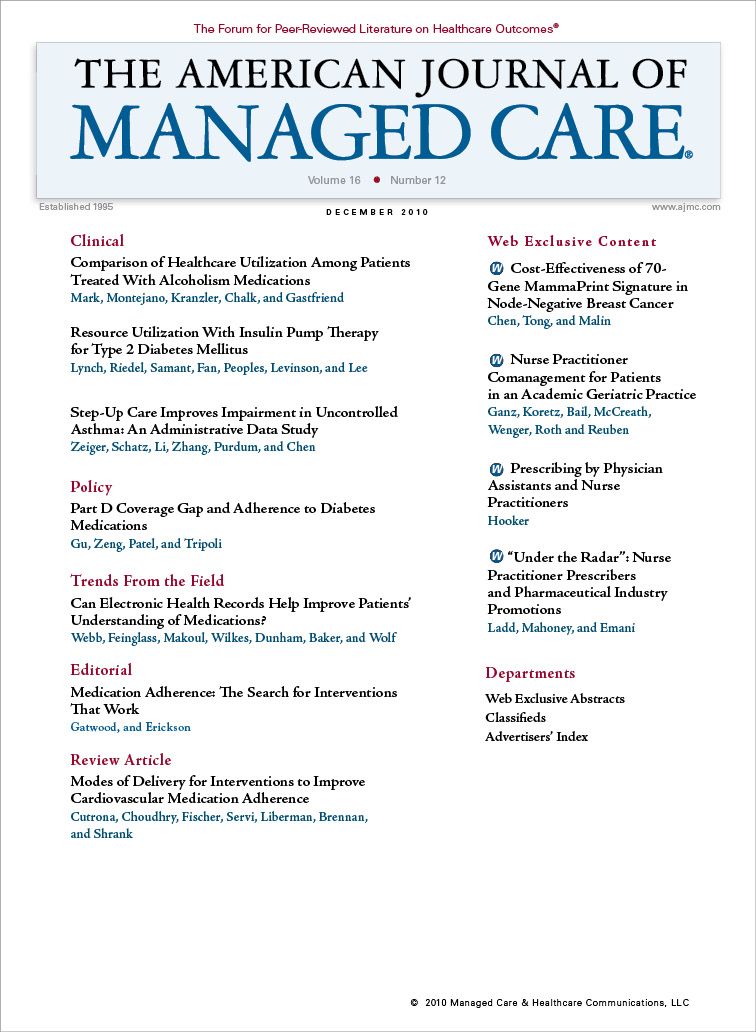