Hepatic encephalopathy, a complication of liver disease, is a serious neuropsychiatric condition that causes severe burden among patients and the healthcare system.

The American Journal of Accountable Care. 2018;6(4):32-33Liver impairment resulting in cirrhosis is associated with a host of serious complications, ranging from swelling and infections to liver cancer and liver failure.1 Risk factors for cirrhosis, a chronic liver disease (CLD), include long-term alcohol abuse, type 2 diabetes, hepatitis, age older than 50 years, male gender, and nonalcoholic fatty liver disease (NAFLD), which is a metabolic syndrome caused by obesity, high cholesterol, and high blood pressure.1,2 About 1 in 400 US adults has cirrhosis, and it is most common in those aged between 45 and 54 years, but these figures are likely underestimates due to undiagnosed cases.1 Cirrhosis is diagnosed by blood tests for liver enzyme levels, in conjunction with blood count tests and tests for viral infections like hepatitis; these tests can help physicians not only make a diagnosis of cirrhosis but also assess the severity and potentially pinpoint the cause.3 Additionally, imaging tests and biopsies can reveal liver scarring.3

Although no specific cure exists for cirrhosis, it is most often treated by addressing its underlying causes. For example, patients with alcoholic liver disease will be advised to completely abstain from alcohol, whereas those with NAFLD may benefit from losing weight.4 Hepatitis C can now be cured with medication, and the effects of hepatitis B can be slowed by the use of antiviral medicines.4 Clinicians managing CLD and cirrhosis must also be vigilant in identifying and treating the numerous complications of the disease.

Among the most dangerous complications of CLD is hepatic encephalopathy (HE), a neurologic condition that impairs cognition, alters behavior, and can cause hepatic coma in the most severe cases.5,6 Between 20% and 80% of patients with cirrhosis experience minimal or covert HE, in which they lack obvious clinical signs of the disorder, but 30% to 40% of those with cirrhosis will experience fully symptomatic overt HE at some point.7 Patients with HE accounted for more than 110,000 hospitalizations per year between 2005 and 2009, making up about 0.33% of hospitalizations in the United States.8 Their in-hospital mortality decreased from 15.6% to 14.4% during this time, but the apparent severity of illness worsened over time, as both length of stay and inpatient charges increased.8

Effects, Types, and Causes of HE

HE is associated with a range of neurological and psychiatric manifestations. In its least severe form, symptoms like fatigue and mild impairments in attention, memory, and visuospatial acuity can go unnoticed, but as it worsens and becomes overt, family members may report personality changes, such as irritability or inappropriate behavior, and the patient experiences disorientation to time and space.5,7 Motor symptom abnormalities are common, including asterixis or “flapping tremor,” which precedes the stupor and coma that occur in the later stages.7 Clinicians use the West Haven grading criteria to assess the severity of HE and separate covert from overt HE.5,6

HE can be classified according to severity, as with the West Haven criteria, but also according to underlying disease, time course, and presence of precipitating factors.7 Type A HE results from acute liver failure, type B results mainly from portosystemic bypass or shunting, and type C results from cirrhosis. Patients are categorized by time course as having episodic HE, recurrent HE (having intervals between bouts of less than 6 months), or persistent HE (constant behavioral alterations interspersed with overt HE relapses).7

Although the exact mechanisms of the pathogenesis of HE are not completely known, there is some consensus among researchers that a synergistic effect of factors is to blame. Among these factors are ammonia levels, inflammation, bile acids, oxidative stress, and lactate.9 Specifically, hyperammonemia results in decreased excitatory neurotransmission, potentially related to γ-aminobutyric acid—benzodiazepine receptors, which can cause the neuronal dysfunction that leads to HE symptoms.5 Research has also pointed to the importance of neuroinflammatory responses in some patients and the potential role of gut microbiota.10

Care Management in HE

A 4-pronged approach is most commonly recommended for managing overt HE and consists of (1) initiating care for patients with altered consciousness, (2) seeking and treating alternative causes of altered mental status, (3) identifying and correcting precipitating factors, and (4) commencing empirical HE treatment.7 With regard to the last step, the use of nonabsorbable disaccharides such as lactulose is recommended as an initial treatment to reduce ammonia absorption and encourage the growth of beneficial intestinal microorganisms, but poor adherence is common because patients are asked to titrate their doses based on their bowel movements, which can be challenging for those experiencing cognitive impairment.5-7 The antibiotic rifaximin has also been shown effective in improving symptoms and prolonging remission.6,7 Evidence for the use of probiotics (eg, yogurts with Lactobacillus) in managing HE is unclear, but some studies suggest that they can reduce the risk of overt HE episodes compared with placebo.6,7

Guidelines suggest delivering lactulose with or without rifaximin as prophylaxis to patients whose HE is in remission; this may help prevent recurrence, avoid hospitalizations, and improve quality of life.6,7 After patients achieve remission, it is generally suggested that they continue prophylactic therapy indefinitely, unless there is a specific precipitating factor for the patient’s HE that can be managed (eg, recurrent infection, variceal hemorrhage).7

When HE persists and severely worsens a patient’s quality of life despite following therapeutic guidelines, physicians may consider liver transplantation, but the literature emphasizes the importance of identifying and embolizing portosystemic shunts before or during transplantation, as these can cause persistent HE even after a transplant.7 Patients and family members should be aware that other causes of mental impairment, such as Alzheimer disease, will not be reversed by the transplantation.7

Cost Considerations of HE

Given the recurrent nature and unclear mechanisms of HE, as well as the rising number of cases in the United States, there is a significant cost burden resulting from the condition. The total national costs were estimated at $724.5 million in 2009, up from $467.7 million in 2005.8 However, these estimates do not include outpatient care, nor do they account for indirect costs like lost wages, impaired quality of life, and shorter life expectancy.7,8 Most direct costs are accrued by the federal government, as about two-thirds of patients with HE are covered by Medicare and Medicaid; the proportion of Medicare beneficiaries is expected to increase as the population ages.8

Beyond these easily measurable costs to payers, HE has insidious economic and personal effects on patients and their families. Compared with patients with only cirrhosis, those with cirrhosis and HE were far less likely to be employed (19% with HE vs 87.5% with cirrhosis) and were associated with a higher level of burden on their informal caregivers, which was reported to be due to financial, scheduling, and emotional factors, including feelings of being trapped.11 Those caregivers also reported higher rates of depression and anxiety than those caring for patients with cirrhosis but not HE.11

In light of these high costs to payers, health systems, patients, and families, many of the attempts to reduce the cost burdens of HE have focused on preventing hospital readmissions, mainly through prophylactic treatment with rifaximin.12 One quality improvement program produced encouraging effects on readmission rates by prompting goal-directed lactulose and rifaximin therapy within providers’ electronic order entry system.13

HE represents a costly and damaging source of morbidity and mortality in the United States, and its detrimental effects are only expected to rise as the susceptible population ages and rates of precipitating factors for CLD, like diabetes, continue to increase. Keeping ahead of its burden will require a multipronged approach that ties together evidence-based treatments, clinical decision support tools, and readmission prevention strategies to result in the most cost-effective care possible for patients with HE.REFERENCES 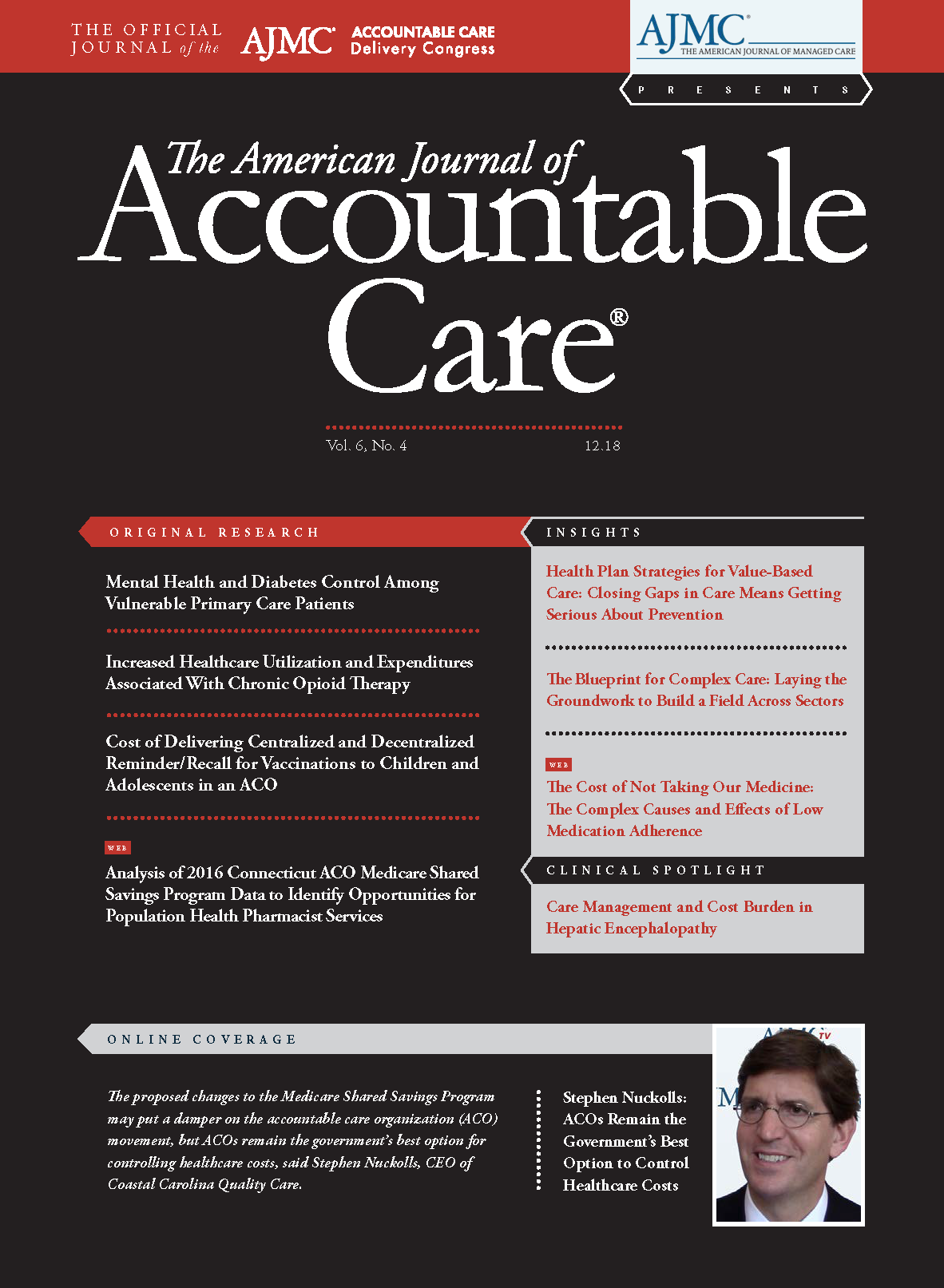 The Blueprint for Complex Care: Laying the Groundwork to Build a Field Across Sectors
Health Plan Strategies for Value-Based Care: Closing Gaps in Care Means Getting Serious About Prevention
Care Management and Cost Burden in Hepatic Encephalopathy
Increased Healthcare Utilization and Expenditures Associated With Chronic Opioid Therapy
Mental Health and Diabetes Control Among Vulnerable Primary Care Patients
Cost of Delivering Centralized and Decentralized Reminder/Recall for Vaccinations to Children and Adolescents in an ACO
Analysis of 2016 Connecticut ACO Medicare Shared Savings Program Data to Identify Opportunities for Population Health Pharmacist Services
The Cost of Not Taking Our Medicine: The Complex Causes and Effects of Low Medication Adherence
Related Videos
Related Content