The delay is partly due to the Inauguration Day executive order than delayed implementing new regulations. But it may also signal a shift in thinking on CMS' approach to bundled payments and who should drive them-doctors or health systems.

CMS will delay the expansion of its joint replacement bundled payment model and its new cardiac bundled payment program, most likely until January 1, 2018, according to an interim final rule in the Federal Register. A final rule governing the programs was set to take effect Tuesday, with an effective date of July 1, 2017.

The delay is due in part to the change of administration; specifically, the January 20, 2017, executive order that halted activity on putting new rules inaction. The delay will allow adequate time for public comment and reduce confusion, the interim rule said. While the document formally delays implementation of both programs until October 1, 2017, it says a 6-month delay would be preferred.

There has been plenty of speculation in healthcare community about what will happen to bundled payments and payment reform generally under the Trump administration, since HHS Secretary Tom Price, MD, was sometimes a critic of the Center for Medicare and Medicaid Innovation (CMMI) during his tenure as a Georgia Congressman. Price is an orthopedic surgeon by training.

Most observers have said that even if the coverage elements of the Affordable Care Act (ACA) are repealed, payment reform would move forward under the Trump administration, in part because Republicans voted overwhelming with Democrats for the Medicare Access and CHIP Reauthorization Act (MACRA).

Clues that the delay was coming were tucked in a speech given Friday by Kate Goodrich, MD, MPH, director of the Center of Standards and Quality and chief medical officer at CMS. Goodrich spoke at the 66th Scientific Session of the American College of Cardiology (ACC), in Washington, DC, just blocks from the US Capitol. While never stating outright that the rule would be delayed, she said that CMS was “working hard” to bring more advanced payment model (APM) choices by 2018, and referenced “some retrofitting” of the cardiac payment bundle. The date also appeared on one of her slides (see below). 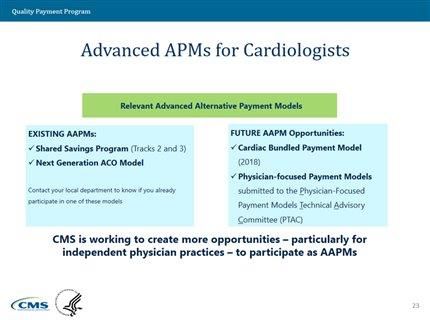 Beyond more time to get ready, the delay underscores an apparent shift in thinking about which parts of the healthcare system should drive innovation—large health systems or doctors&mdash;that could lead to some changes in the expansion to the Comprehensive Care for Joint Replacement model (CJR), as well as the launch of the Cardiac Rehabilitation Incentive Payment model.

At ACC, Goodrich also spoke animatedly about the role of the Physician-Focused Payment Model Advisory Committee (PTAC), which was created under ACA but has received less attention than CMMI. Some believe that PTAC, which is driven by physicians, will be the nerve center for more APMs going forward. In a December 2016 blog post, Greg Fulton of Phillips Wellcentive, a contributor to The American Journal of Managed Care®, wrote of the emergence of PTAC as payment model power center.

Carolyn Magill, CEO of Remedy Partners, said Monday the delay in the cardiac bundled payment program isn’t a surprise, because it is a mandatory program (required in 1120 hospitals). Magill, whose company is a “convener” of bundles—it provides software and services for entities taking part in CMS programs&mdash;said mandatory programs that involve a single episode of care may not drive hard enough at changing an institution’s mindset, while this is more likely to happen with voluntary bundled payment programs.

“The most success happens when we can drive systemic change,” she said in an interview. In addition, Price has expressed support for voluntary initiatives under the Bundled Payments for Care Improvement, according to Magill.

But will voluntary bundled payments do enough to control costs, if CMS cannot target the areas where savings are needed? Magill said now that bundled payments have been recognized as an APM under MACRA, physicians will have incentives to participate; over time, patients will be drawn to those doctors with a commitment to quality.

Getting doctors involved in driving risk-sharing initiatives is key, Magill said, and she agreed that PTAC would drive more change in the coming years.

Goodrich appeared with a panel of speakers to discuss APMs and MACRA. Most of her 19-minute presentation on the Merit-based Incentive Payment System, of MIPS, which calls on physicians who bill Medicare—and most cardiologists do&mdash;to report at least 1 quality measure in 2018 or face penalties. At the 17-minute mark, Goodrich mentioned the cardiac bundle program in passing but did not make it clear that the rule was being delayed:

“We also hear from a lot of folks that they really wanted more APMs available to them, starting as early as possible. So, we are working hard to have more opportunities for participation in advanced APMs for folks by 2018, including some retrofitting of a bundle payment model, the cardiac bundled payment model, as well as what we hope will be more physician-focused payment models that come forward to the innovation center to the PTAC, the Physician-Focused Payment Model Technical Advisory Committee.”

Coverage of our peer-reviewed research and news reporting in the health care and mainstream press.

A session at the 2022 American Society of Health-System Pharmacists Midyear Clinical Meeting & Exhibition reviewed some trends in the 340B drug pricing programs and Medicaid.