Contributor: COVID-19 Vaccine May Not Be the Ultimate Panacea

We should look forward to a safe, effective vaccine for coronavirus disease 2019 (COVID-19) but not expect it to be the ultimate panacea.

At the beginning of 2020, we woke up with a challenge of a virus threatening to annihilate humankind. It took a while for many world leaders to understand that it is not the number of deaths caused by the virus but the reality that, if left uncontrolled, the coronavirus disease 2019 (COVID-19) can kill about half of the world’s population. Many kept quoting the yearly deaths caused by influenza and other seasonal diseases to downplay the risk until they realized that this is not an average incidence of a viral infection. Humans are very good at reacting, and we did by trying to figure out how to stop the pandemic.

The Spanish flu pandemic of 1918, the deadliest in history, infected an estimated 500 million people worldwide—about one-third of the planet's population at the time—and killed an estimated 18 million to 100 million victims, including some 675,000 Americans (although the data vary widely). There were 3 waves of the pandemic, according to the CDC,1 starting in March 1918 and ending in summer 1919; some report that a fourth wave2 happened in select regions in 1920. However, when making such comparisons, we must take into account several factors that added to the calamity at the time: less-advanced health care systems and medical technology, the lack of an intergovernmental world health agency, and an ongoing world war. On the other hand, the pandemic was better controlled because there was a lack of ready air travel like that which brought COVID-19 to every corner of the world within weeks in early 2020. Regardless of how we claim to understand the Spanish flu, a proportional analysis will say that we will lose over 3 million Americans today, and perhaps at least 75 million to 100 million patients across the globe if we let the current pandemic run amuck.

The pharmaceutical companies jumped into finding treatments and vaccines; billions of dollars were invested instantly. So far, 2 existing drugs—the antiviral remdesivir and the immune modulator hydrocortisone—showed promise in reducing mortality, albeit minimally. None of the other suggestions, some from the Trump administration (or even the president himself)—including the use of hydroxychloroquine and herbal extracts or even inhaling bleach worked—and hundreds died trying these unfounded suggestions, according to new research published in The American Journal of Tropical Medicine and Hygiene.3

It has long been established that there is no treatment possible for virus infections, only the means of ameliorating its impact on the body cells; however, the new science of immunology may find an antibody that can stop the spread, but that is a long way out—I do not see any promising finding for years.

Vaccines provide a promise to stop the spread, and the race to develop a new vaccine for COVID-19 took an exciting turn wherein many novel vaccines that had never been tried before began to take shape and have reached the final clinical testing stages. The vaccines in advanced stages of development include live or attenuated virus (SinoVac), virus-like particles (Medicago, Doherty), adenovirus-based (Johnson & Johnson, CanSino, AstraZeneca, Oxford), recombinant (NovaVax), mRNA (Moderna, BioNTech, Pfizer, CureVac), and DNA (Inovio). If regulatory agencies approve one of these novel vaccines (mRNA, DNA, recombinant, or virus-like particle), this will be a historic event that will open many new possibilities in the future—so, there is a bright light at the end of this viral tunnel. However, despite the efforts to rush these vaccines, I do not see a vaccine coming for months. 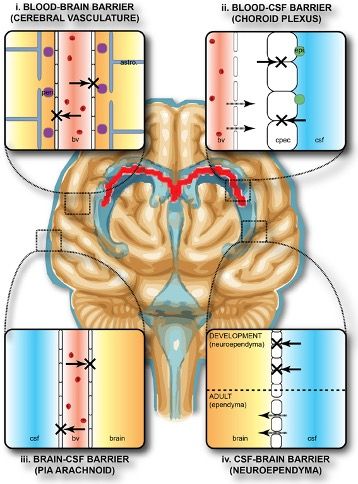 Astro, astrocyte; bv, blood vessel; cpec, choroid plexus epithelial cell; CSF, cerebrospinal fluid; peri, pericytes.
The collective term “blood-brain barrier” is used to describe 4 main interfaces between the central nervous system and the periphery. (1) The blood-brain barrier proper formed by tight junctions between the endothelial cells of the cerebral vasculature. It is thought that pericytes are sufficient to induce some barrier characteristics in endothelial cells, while astrocytes are able to maintain the integrity of the blood-brain barrier postnatally. (2) The blood-CSF barrier formed by tight junctions between epithelial cells of the choroid plexus epithelial cells (note the plexus vasculature is fenestrated). Resident epiplexus immune cells are present on the CSF-surface of the plexus epithelium. (3) The outer CSF-brain barrier and the level of the pia arachnoid, formed by tight junctions between endothelial cells of the arachnoid vessels. (4) The inner CSF-brain barrier, present only in early development, formed by strap junctions between the neuroependymal cells lining the ventricular surfaces. In the adult, this barrier is no longer present. Both the blood-brain and CSF-brain barriers extend down the spinal cord. The CSF-filled ventricular system is depicted in blue, while CNS brain tissue is in brown. The lateral ventricular choroid plexuses are shown in red.4
Image: https://commons.wikimedia.org/w/index.php?curid=43530785; CC BY-SA 3.0

Just when we had begun to be optimistic about the COVID-19 vaccines, a research finding throws a bucket of cold water on the optimism. A Yale study found that COVID-19 readily enters the brain, an uncommon property of viruses, where it acts differently than in the lungs.5 In the brain, the virus multiplies but does not kill the cells; it merely constricts the neighboring cells, reducing the oxygen in the cells to cause strokes.

While the Yale study is a preliminary finding, and is currently published online as a preprint that has not been peer reviewed yet, it clarifies many observations about COVID-19 mortality rates in the elderly, who will be more susceptible to reduction in brain oxygen—more than 70% of COVID-19 deaths are among the elderly. One reason why I believe these findings will be proven correct is the known science about viral infections. Our body has a robust protective system—the blood-brain barrier—that keeps many harmful chemicals from entering the brain since the brain does not have any protective systems to neutralize them [Figure]. So, when we vaccinate, we produce antibodies, but those antibodies do not enter the brain, leaving the brain unprotected. The fact that COVID-19 can enter the brain directly without going through the path where the antibodies may destroy it adds a different picture of what the COVID-19 will be able to do.

While the world is betting on a vaccine to end the pandemic, the optimism evaporates with this new finding. At-risk here is the reality that we will stop efforts to contain the spread once the vaccine becomes available. That may result in a rebound of a different kind, for which we will not have a solution. Controlling the virus's spread and leading to herd immunity will work, as it has over the past millions of years. My advice is that we should look forward to a safe and effective vaccine but do not see this as the ultimate panacea.

Sarfaraz K. Niazi, PhD, is an adjunct professor of biopharmaceutical sciences at the University of Illinois, and founder of biosimilars companies Karyo Biologics and Adello Biologics. He also founded the biosimilar advisory company PharmSci. He can be reached via email at Sniazi3@uic.edu.