Colorectal cancer (CRC) remains one of the leading causes of cancer-related deaths in the United States, and although tremendous research efforts have been invested in understanding the nunances of the disease and its treatment, we are far from successfully extending the life of a majority of those diagnosed with CRC. 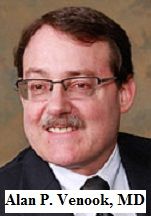 At the National Comprehensive Cancer Network 21st Annual Conference, Alan P. Venook, MD, professor of Clinical Medicine and the Madden Family Distinguished Professor of Medical Oncology and Translational Research at the University of California, San Francisco, provided insight into lessons learned by oncologists over the years as they treat the disease. He also walked the audience through progress made in developing treatments and why we may have failed in improving outcomes in this population of cancer patients.

“With our understanding of the genome, things have changed and our understanding of the disease has improved.” The key player back in the 1990s was 5-fluorouracil (5-FU), Venook said, and that drug still remains popular in the standard of care for CRC patients. “To improve survival in this disease, we asked whether we could move new therapies into the adjuvant setting,” said Venook.

One drug that did work was a deworming agent that was very popular in veterinary medicine, called levamisole. A bright blimp in the treatment of CRC appeared with the discovery that 5-FU and levamisole could work well together in these patients and it became standard of care by NCI advisory. “But the drug caused demyelination in patients and was taken off the market,” said Venook.

Venook believes that a lot of new tools that researchers have at their disposal today are making the guidelines for CRC very complex. “But complexity primarily arises from patient subsets. The challenge is to identify patients that belong in these subsets as early as possible, so their treatment path can be clearly delineated early on.” The goal of course would be to identify biomarkers early on for maximal benefit of care, he added.

Venook provided an overview of other drugs developed in the field that used biomarker expression to ascertain response. The list included targeted biologicals like cetuximab. Cetuximab was the first targeted biologic approved for metatstatic CRC in patients who express the epidermal growth factor receptor (EGFR), and cetuximab plus FOLFIRI (irinotecan, 5-FU, leucovorin) became the first biologic treatment regimen approved by the FDA in patients with newly diagnosed metastatic CRC. Although cell surface expression of EGFR was expected to be a predictive biomarker in patients treated with this combination, it was not. Another anti-EGFR antibody, panitumumab, was developed using KRAS expression as a predictive biomarker for the treatment of refractory mCRC patients. A study published in The Lancet Oncology found that the 2 drugs are equivalent with respect to overall survival (OS, about 10 months median survival) in patients with metastatic CRC.

Targeting the angiogenesis receptor, vascular endothelial growth factor receptor (VEGFR), has not found much success either. Despite efforts to identify a predictive biomarker for bevacizumab, regorafenib or any of the other biologicals that work thru the VEGFR pathway.

Studies that were designed to answer these questions have presented mixed results depending on patient populations, Venook said. While bevacizumab-treated patients with metastatic CRC in the United States and Canada performed better than European patients, the outcomes with cetuximab as first-line treatment were much better in the European population.

“There have been significant improvements in diagnosis and imaging techniques over the past few years, which can aide decisions on who could gain from surgery,” he said. “However, a sum of all treatments that have been developed over the last decade finds that 10 months OS seems the most that has been achieved, although progression-free survival keeps improving. I think we are seeing a significant improvement in the continuum of care for CRC and in quality of life factors.”