Healthcare, the National Debt, and Taxes

Dec 31, 2012
This article is based on the presentation by Michael E. Chernew, PhD
Evidence-Based OncologyConference Coverage
Volume 18
Issue SP6

“Don’t fool yourself into thinking that this debate is about value and cancer care or about healthcare…This is fundamentally a debate about taxes,” stated Michael E. Chernew, PhD, professor of health care policy, Harvard Medical School, and co-editor-in-chief of The American Journal of Managed Care.

During his presentation entitled Controlling Health Care Spending Growth: the Role of Benefit Design and Payment Reform, Dr Chernew noted that while we can all discuss the various means to improve how we monitor and track outcomes and costs of care, the healthcare system is strongly linked to our national debt. To illustrate, he showed the figures for federal spending on health as a percentage of gross domestic product ( and ).

Dr Chernew noted that if we continue to finance higher healthcare spending by taxes, marginal tax rates of high income earners could rise to 70% by 2060.1 He stated that the key is to not reduce spending on healthcare. Instead, we should slow down the growth in spending. According to Dr Chernew, there are several ways to slow growth. The first way is payment reform.

One goal of payment reform is to simply pay less to both providers and plans.

The problem with paying less, according to Dr Chernew, is that it retains many of the pathologies currently present in the healthcare system. The fee-for-service system “is anywhere between inane and unmanageable,” he stated, adding that “Issues about site of care, issues about how many different codes there are for very similar things, issues about how to depreciate big equipment….lowering payments in fee for service does not solve all those issues.”

Dr Chernew noted there are numerous problems with any program that reduces spending. First and foremost, there is a concern for reduced medical outcomes.

Another option to slow spending growth is benefit design. Dr Chernew said that some people believe the best way to reform the system is to let consumers vote with their pocketbook instead of the above payment-reform scenarios that are dependent on policies and bureaucrats. Some examples of how to do this include:

1. Higher co-premiums/premium support. Dr Chernew said this is an easy design to visualize, as customers pay higher premiums while the government pays a fixed amount for care.

2. Higher copays, co-insurance, or deductibles. With this option, the customer pays more at the point of service. One concern with this design is that it will reduce the use of high-value services.

3. Reference pricing. This design sets prices on various treatments and if patients want additional or alternative care, they have to pay extra.

4. Tiered networks. With this method, patients may be asked to bear an increased share of the costs of care for higher-tier care (ie, higher copays for nonformulary drugs or experimental drugs).

5. Value-based insurance design. Using this design, copayments are aligned with value. Dr Chernew is in favor of this design but is concerned that it may be difficult to implement.

Dr Chernew noted that benefit design changes can support efforts to control the public spending problem. However, if not designed properly, they can lead to other problems in the end.

Dr Chernew concluded his presentation by pointing out that each of the ideas discussed have pros and cons. Episode-based bundled payment may work for the certain common conditions, but may have limited value in less common ones. He is concerned that bundled payments may become political and pit innovation against higher taxes.

Dr Chernew also stated that costsharing strategies may work, particularly those that reduce payer spending. The major concern with cost-sharing is that it transfers a lot of risk to individuals and it may exacerbate disparities. On the plus side, however, those concerns may be mitigated if a valuebased insurance design is used. Such plan designs will be valuable to address all areas of cancer.

Finally, he said that there are other strategies being examined. It is unlikely they will have substantial effects. Innovations in the future will likely fall under 1 of 2 general categories: (1) more consumerism; or (2) broader payment. Dr Chernew concluded, “The challenge we face is that as we move away from a world in which value was the closing word of every argument…to one in which presumption or proof of value is going to be more important, we must navigate these waters in a way that does not dampen innovation and prevent us from having better treatments in the future.”1. Baicker K, Skinner J. Health Care Spending Growth and the Future of U.S. Tax Rates. http:// www.nber.org/programs/ag/rrc/NB11-14%20Baicker,%20Skinner%20WP.pdf. Published September 2011. Accessed November 30, 2012. 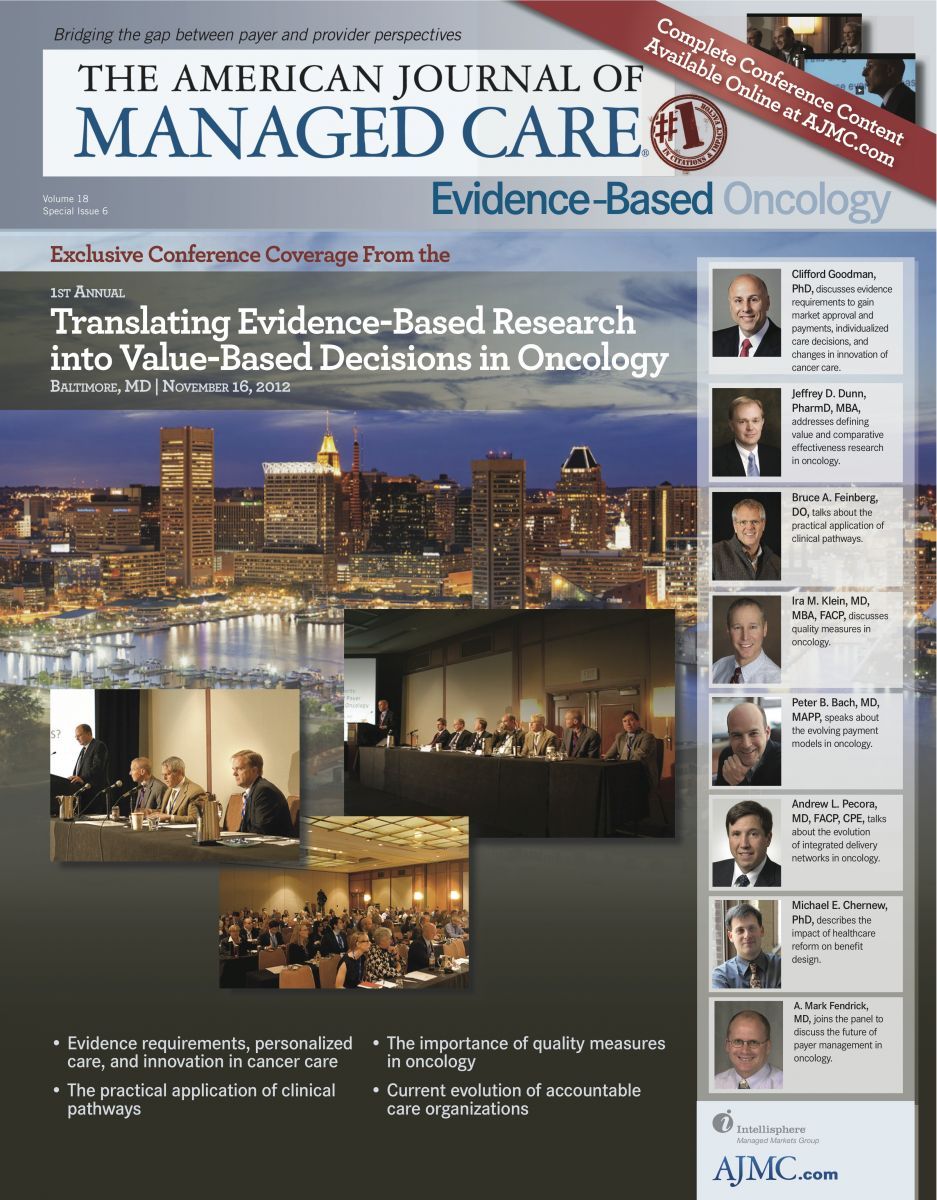