We examined the effect of country of origin on HBV testing and chronic HBV infection prevalence among APIs using data from Kaiser Permanente Hawaii.

Objectives: Asian and Pacific Islanders (APIs) constitute less than 6% of the US population, but account for more than half of Americans with chronic hepatitis B virus (HBV) infection. We sought to examine the effect of country of origin on HBV testing and chronic HBV infection prevalence among APIs.

Methods: We analyzed demographic and clinical data collected for adults from Kaiser Permanente Hawaii with 1 or more healthcare encounters during 2006 to 2008, 12 months or more of follow-up before 2009, and no HBV-related diagnosis within 6 months of enrollment. Persons who received a test and a positive test result for HBV surface antigen or HBV DNA were classified “tested” and with “chronic HBV infection,” respectively.

Conclusions: Less than one-third of this managed care API population (29% of 53,573) was tested, yet the prevalence of chronic HBV infection (3.2%) was 12 times higher than that of the general US population. These findings underscore the importance of adherence to HBV testing guidelines to identify persons with infection so they may be linked to care.

In 2009, an estimated 1.32 million foreign-born individuals with chronic HBV infection were thought to be living in the United States, and 58% of those persons migrated from Asia, where HBV infection is highly endemic.2 The population makeup of Hawaii, the 50th US state, includes 47% persons of Asian descent and 29% persons of Native Hawaiian/Pacific Islander descent.5,11,12 Among Hawaii’s 212,229 foreign-born residents in 2000, 73% were born in countries with endemic HBV infection, including China, Vietnam, the Philippines, and elsewhere among the South Pacific Islands.13

In Hawaii, Kaiser Permanente (KPHI) has approximately 220,000 members and is the largest health maintenance organization (HMO) providing care in the state.14 Commensurate with the high representation of APIs living in Hawaii, APIs constitute approximately half of KPHI’s membership. Given the unique demographic conditions in Hawaii relative to other US states, and our access to demographic and clinical data collected from patient encounters, we sought to examine the effect of country of origin on HBV infection testing and prevalence among APIs at KPHI.

Persons eligible for the study included those who: (1) were aged 18 years or older; (2) had at least 1 KPHI clinical encounter at any time during January 1, 2006, to December 31, 2008; and (3) completed at least 12 months of continuous follow-up any time before 2009. To examine HBV infection testing and prevalence among persons without previously diagnosed infection, we excluded those with any HBV-related International Classification of Diseases, Ninth Revision (ICD-9) diagnosis code within 6 months of their first KPHI clinical encounter. Retrospective electronic data were available through January 1, 1998.

Patient data were collected from electronic medical records and included age (as of last encounter before December 31, 2008), gender, race/ethnicity, annual income (derived from census tract data based on geocode), and serum alanine aminotransferase (ALT) level. Abnormal ALT was defined as a level higher than the lab-specific upper limit of normal value (range: 3-63 IU/L). Data were collected from the date of the patient’s earliest health plan enrollment through the last health plan encounter, ending December 31, 2008. Methods were identical to those used in an earlier analysis of hepatitis testing and prevalence among 1.2 million persons in 4 healthcare organizations including KPHI, but which lacked country-of-origin data.15 Briefly, persons were classified as “tested” if they had at least 1 test performed for HBV surface antigen (HBsAg) or a qualitative or quantitative test for HBV DNA; those classified with “HBV infection” had at least 1 positive result for any of these tests. The number of persons with infection divided by the number of persons tested was calculated to determine HBV infection prevalence. APIs were classified as foreign born (birth in Asian or Pacific Island countries) or US born (birth in the United States or Canada), based on the self-reported country of origin.

This study was reviewed and approved by the KPHI Institutional Review Board and followed guidelines of the US Department of Health and Human Services for protection of human subjects.

In this study of HBV testing and infection prevalence among APIs in a large HMO, we found that less than onethird of persons without a HBV diagnosis code at enrollment were tested for HBV infection. Among APIs who were tested, the prevalence of HBV infection (3.2%) was almost 12 times higher than that of the general US population (HBsAg prevalence 0.27%). Among foreign-born APIs who were tested, 90% of whom were born in countries with high HBV endemicity, infection prevalence was largely commensurate with that of their country of origin (7.5% overall). These findings support US Centers for Disease Control and Prevention (CDC) guidelines that recommend HBV infection screening for pregnant women, persons with high-risk behavior, and those born in Asia, Africa, and other geographic areas where HBsAg prevalence exceeds 2%.3

Even among US-born APIs, the prevalence of HBV infection was high (1.8%) relative to the general US population. Maternal country of birth information among USborn APIs might have permitted differentiation of first generation “API Americans” from those whose families had resided in the United States for multiple generations, and may have permitted further differentiation of infection prevalence; however, we did not have access to such information.

Results were compared with those from other studies. For example, a study by Lin et al reported HBV prevalence to be almost double (6.2%, 185 of 2973) that found in our study among previously undiagnosed API adults, and foreign-born APIs (10.7% HBsAg-positive test result) were approximately 20 times more likely to be chronically infected than US-born APIs (0.7% HBsAg-positive test result; RR 19.4, 95% CI, 2.6-141.8.17 Two other US-based studies—1 conducted in Hawaii (overall HBsAg prevalence, 3.6%)13 and another that used university students in California as study subjects (overall HBsAg prevalence of 2.3%, 1.4% in US-born and 3.3% in foreign-born APIs)18— assessed HBV infection prevalence, and results of those studies more closely aligned with our results, although these studies did not limit their analysis to APIs and had an age range of 18 to 21 years. In our study, perhaps most remarkable was that among APIs with a history of at least 2 abnormal ALT tests, fewer than 50% were tested for HBV infection. CDC and the American Association for the Study of Liver Diseases guidelines recommend testing persons with unexplained abnormal liver enzyme tests for HBV (and hepatitis C virus) infection.19

Our study had a number of limitations. In order to ensure assessment of persons with sustained followup, eligibility criteria for the study required at least 12 months of continuous follow-up any time before 2009. We acknowledge that some persons could have been tested in 2009 or thereafter and not included in our analysis. In addition, although we excluded those with an HBV ICD-9 diagnosis code within 6 months of their first clinical encounter, some persons could have previously tested negative for HBV infection or been vaccinated for HBV in another healthcare setting prior to our period of study, and might not need to be tested again. Secondly, from a case definition standpoint, we used a single HBsAg or HBV DNA to define testing for and infection with HBV. Although most of these infections were chronic, it is conceivable that some were actually acute. Given the low incidence of acute HBV infection in the United States, however, it is unlikely that such misclassification would have appreciably affected our results.

Finally, we recognize that the estimates of testing frequency and infection prevalence in our cohort are not necessarily reflective of all private and public healthcare systems in the United States. Nonetheless, our study had a large sample size and was conducted in a setting with high representation of persons of API descent.

In summary, we found that less than one-third of this API population in managed care were tested for HBV infection and that among those tested, the prevalence of HBV infection was nearly 12 times higher than that of the overall US population. Infection prevalence among foreign-born APIs was similar to that of their country of origin. The prevalence of HBV infection among US-born APIs was almost 7 times higher than for the overall US population. These findings underscore the importance of adherence to current US guidelines that recommend HBV testing of persons born in countries with intermediate and high HBV endemicity, and the testing of US-born persons whose parents were born in such countries. At KPHI, country-of-birth information is not collected routinely. The results of this paper might provide evidence of the importance of collecting such information routinely in our health system. Sensitivity analysis has shown the costeffectiveness of HBV screening, even with the prevalence of chronic HBV infection as low as 1%,20 and hence it is important to focus HBV screening efforts on high-prevalence groups such as foreign-born APIs. Persons found to be susceptible to infection should be vaccinated, and those found to have infection should be evaluated for treatment.Author Affiliations: Kaiser Permanente Center for Health Research Hawai’i, Honolulu, HI (VV, CN); Centers for Disease Control and Prevention (CDC), National Center for HIV/AIDS, Viral Hepatitis, STD, and TB Prevention, Atlanta, GA (PRS, ACM, EHT); Henry Ford Health System, Detroit, MI (ML, SCG); Kaiser Permanente Center for Health Research Northwest, Portland, OR (EH); Geisinger Health System, Danville, PA (JAB).

Source of Funding: CHeCS was funded by the CDC Foundation, which received grants from Abbott Laboratories; Genentech, a member of the Roche Group; Janssen Pharmaceutical Companies of Johnson & Johnson; and Vertex Pharmaceuticals.

Author Disclosures: The authors (VV, PRS, ACM, LBR, ML, SCG, EH, JAB, EHT, CN) report no relationship or financial interest with any entity that would pose a conflict of interest with the subject matter of this article. The findings and conclusions in this report are those of the authors and do not necessarily represent the official position of the CDC. 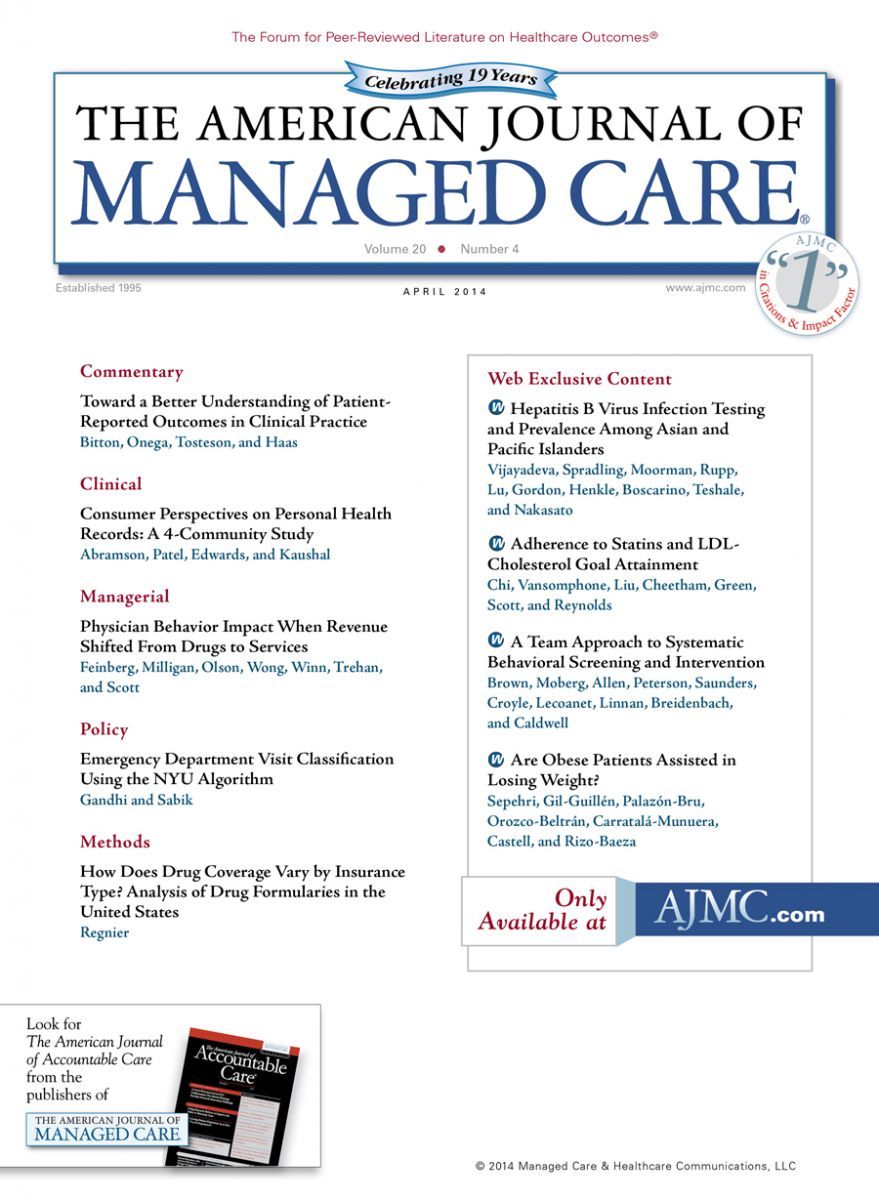