Objectives: Advance care planning (ACP) consults have been credited with increasing the likelihood that patients will receive desired care at the end of life, including reduced hospitalization and spending. We aimed to investigate whether implementation of ACP consults leads to improved advance directive (AD) completion rates.

Conclusions: Patients offered ACP consults had significantly higher AD completion rates than those without consults in both primary care and hematology/oncology practices. The difference in ACP consult attendance between the primary care and hematology/oncology groups clearly suggests that further improvements can be made to assist patients in accessing AD education and completion support.

Patients who are offered advance care planning consults have significantly higher advance directive documentation rates than those without consults in both primary and specialty care practices.

The Patient Self-Determination Act was established in 1990 to ensure that US patients are informed of their right to make medical care decisions.1 Medical ethicist Bud Hammes, PhD, led a community effort in La Crosse, Wisconsin, in 1993 to develop an advance care planning (ACP) and decision-making model known as Respecting Choices.2 ACP entails 4 primary actions: (1) thinking through one’s relevant values and preferences, (2) talking about one’s values and preferences, (3) documenting one’s stated values and preferences, and (4) reviewing and updating documentation specific to one’s stated values and preferences. When performed in a comprehensive manner, these actions serve to (1) minimize decision-making burden on family members; (2) reduce the likelihood of conflicts among a patient’s spokesperson, family members, and health care providers; (3) minimize the likelihood of over- or undertreatment; and (4) maximize the likelihood that medical care is consistent with patient wishes.3 Within 2 years of implementing ACP in La Crosse, completion of advance directives (ADs) in the region rose from 2% to 45%.4 This improvement was attributed to widespread standardization, documentation, and utilization of ACP processes.

In addition to better aligning care with patient wishes,5 adoption of ACP has been credited with reducing end-of-life cost of care. In 2015, Dartmouth Atlas identified the La Crosse region as ranking among the areas with the lowest hospital utilization and total health care cost for end-of-life care.6 The national rate for hospitalizations in the last 6 months of life was 125 hospitalizations per 100 older decedents, whereas inpatient spending for that time frame was $15,366 per decedent. Similar rates for the La Crosse region were 102 hospitalizations per 100 older decedents and $12,194 per decedent.

Clinicians at Mayo Clinic Florida (MCF) sought to determine whether ACP consultations could be implemented in an academic, multispecialty health care organization located in the Southeast United States with comparable results.

Beginning July 2014, MCF implemented a pilot to investigate the impact of offering ACP consultations on AD completion rates. An ACP consult refers to an in-depth conversation between a patient and facilitator (typically a social worker). During the 1-hour consult, situations and examples are used to help patients understand options regarding future health care choices. ACP consults are performed using the Honoring Choices model.7 An AD describes 2 types of legal documents, a Living Will and a Healthcare Power of Attorney/Designation of Healthcare Surrogate, that enable patients to plan for and communicate end-of-life wishes and designate health care decision makers to act on their behalf if necessary. Initial facilitator preparation includes 15 total hours of online and classroom training. All trained facilitators receive annual continuing education. The MCF ACP facilitator team includes social workers, volunteers, and support staff.

The pilot aimed to achieve 100 patient referrals yielding 50 ACP consults and 50 completed ADs documented in the electronic health record by October 2014. Over the next 2 years, the program was expanded to include primary care, hematology/oncology, dialysis, neuroscience, and palliative care patients. Patient self-referrals were also encouraged.

Our retrospective study compared the AD completion rate for patients offered ACP consults with that for a randomly selected group of patients seen in the same specialties in the 90 days prior to consult implementation. The study entailed manual chart reviews of patients from 2 specialties that had the largest number of ACP consults: primary care (Community Internal Medicine) and hematology/oncology (Cancer Center). The referral pathway in primary care stemmed from provider education by a physician champion for ACP. In hematology/oncology, the referral pathway was generated primarily from the psychosocial distress screen and social work consults. Data on completed ADs were collected for patients who were offered ACP consults during the time range of July 1, 2017, to June 30, 2018. For each of the control groups, a random sample was reviewed from the list of patients who had an appointment scheduled in primary care or hematology/oncology in the 90 days prior to implementation after excluding patients who subsequently had ACP consults. Data on completed ADs were collected from the samples of primary care patients from March 1, 2015, to May 31, 2015, and hematology/oncology patients from February 1, 2016, to April 30, 2016. Patient demographics, ACP consult attendance rates, and AD documentation rates were compared between the intervention and control groups with χ2 tests, t tests, and logistic regression adjusting for differences in patient age.

A review of our program noted several key strengths and critical success factors. First, some providers regularly discussed ADs with their patients, leading to increased referrals for ACP consults. This finding points to the criticality and impact of the referral source.11 Second, utilizing an electronic psychosocial distress screening tool to identify candidates for ACP consults served to increase patients’ overall awareness of ACP, including the availability of consults. Third, the option for patients to self-refer presented an additional path for ACP consults. Fourth, the support of dedicated resources as a consistent point of contact for information, education, general inquiries, scheduling, and problem-solving proved critical to the success of the study. Fifth, the enthusiasm and continued support from trained facilitators and committed leadership proved invaluable to the success of the pilot and subsequent expansion of ACP consults organization wide.

Our findings were consistent with published literature. In a systematic review of ACP in the population of patients with end-stage renal disease, the implementation of ACP consults was associated with statistically significant improvements in the completion of ADs.12 The review also stressed the importance of the standardized ACP process as a “core business” competency at the organizational level, which resonated with our study. Specifically, provisions to ensure optimal patient access to ACP resources, including properly trained health care personnel, were deemed crucial. Literature focusing on the acute care environment highlighted the importance of continued organizational and administrative support in terms of “provider education, patient information, and quality review” in the ACP process.13

Establishing ACP appointments has some financial implications. Is the effort worth the costs? Our costs were not excessive, as they were primarily for 1-hour appointments for social workers and administrative support. Although several studies report the cost savings of completed ADs near the time of death, we could find no studies reporting the cost benefit of potentially improving AD completion through offering ACP consultations. A systematic review reported in 2016 found cost savings per patient for having documented ADs ranging from $1041 to $64,827 in 6 studies and 1 study reporting no savings.14 An additional study published in 2018 reported costs in the year prior to death of $9500 less in the ACP group than among matched controls.15

One important caveat to consider is that the costs of ACP consults are currently borne by health care providers, whereas the AD completion benefits are experienced by health care payers or society as a whole. Our analysis suggests that to maximize the benefits of AD completion, health care providers offering ACP consults should be reimbursed for their efforts. Since 2016, Medicare has included additional payments for ACP as an optional add-on to the annual wellness visit.16 We are encouraged that our efforts appear to have replicated the La Crosse, Wisconsin, experience. Further efforts are needed to determine how effective this approach could be in other settings.

In addition to the need for more study of the impact of AD completion, we feel that it is important to assess whether ACP consults can be modified to improve their benefit. The experience seen in differences in ACP consult acceptance clearly suggests that improvements can be made in getting patients to attend these consults once there is a broader understanding of their importance.

Several limitations specific to our study were also noted: (1) inconsistencies among providers resulted in less-than-optimal ACP consult referrals; (2) patients exhibited varying levels of comfort in their ability to utilize technology (ie, the iPads used for psychosocial distress screening); and (3) the lack of specifically allocated and dedicated, trained facilitators, as well as adequate space, affected availability of and accessibility to ACP consults. Because of limited manual review resources, we focused our analysis on primary care and hematology/oncology, which had the largest number of ACP consults.

Patients offered ACP consults have significantly higher AD documentation rates than those without consults in both primary care and hematology/oncology practices. The benefit of lower end-of-life costs (based on the literature) far exceeds the cost of offering ACP consults. Further research is needed to improve patient attendance at ACP consults.

Source of Funding: This research was made possible by funding from the Mayo Clinic Robert D. and Patricia E. Kern Center for the Science of Health Care Delivery. 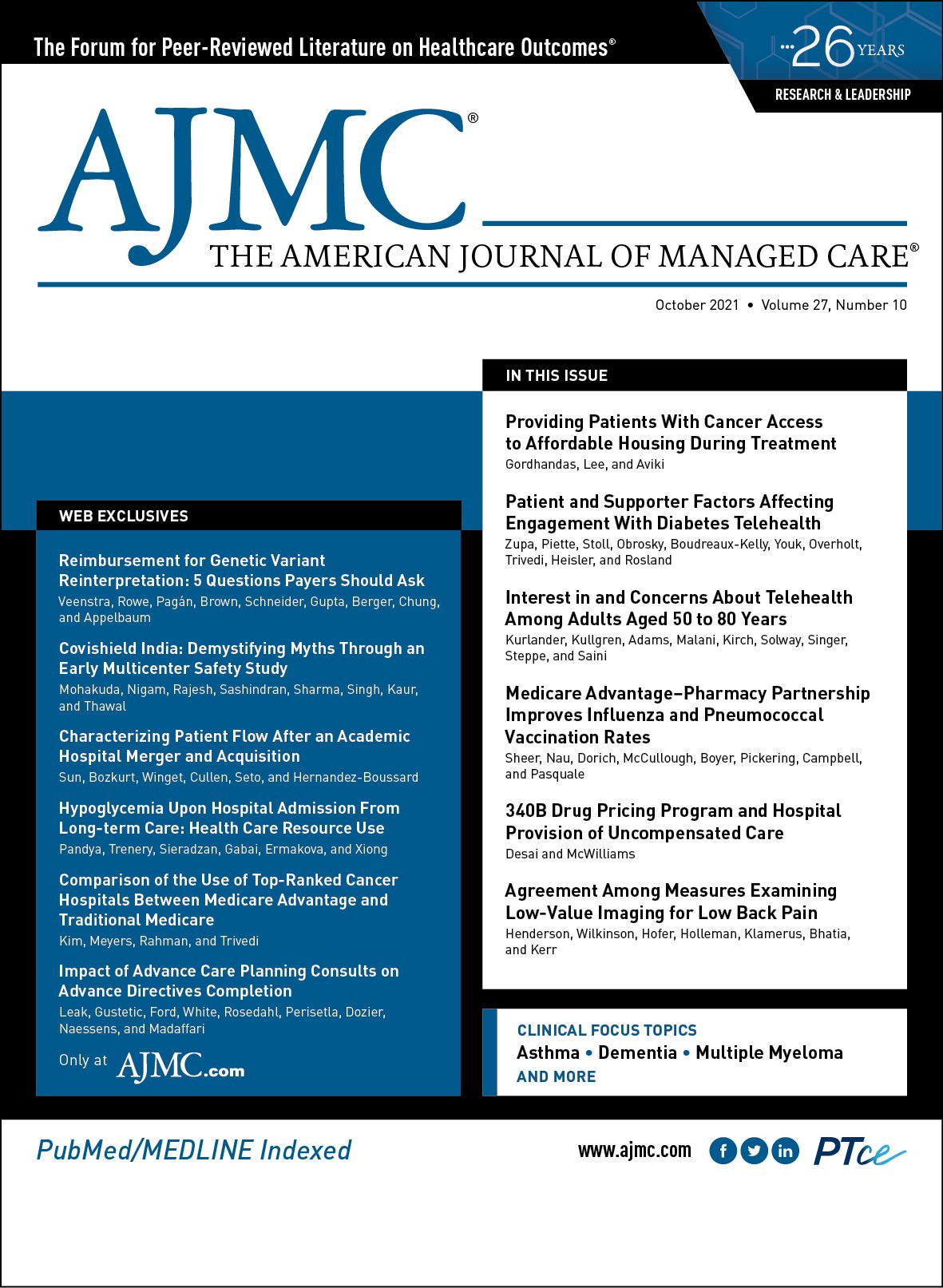