In Conversation With ASCO's Richard Schilsky

The American Society of Clinical Oncology (ASCO)’s Value Framework evaluates the clinical benefit, toxicity, and cost of new interventions compared with the standard of care. ASCO’s CMO, Richard Schilsky, MD, FACP, FASCO, explains their plans to make the framework useful for clinical decisions at the point of care. 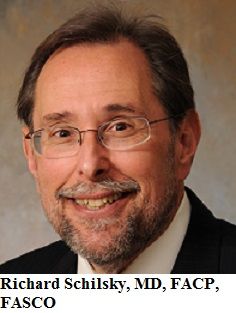 The American Society of Clinical Oncology (ASCO)’s Value in Cancer Care Task Force has carved a conceptual framework for new cancer treatments, evaluating each one for clinical benefit, toxicity, and cost compared with available standards of care. Published in the Journal of Clinical Oncology,1 the framework will form the basis of a user-friendly tool for use by physicians as they discuss new treatments with their patients. ASCO’s CMO, Richard Schilsky, MD, FACP, FASCO, spoke with Surabhi Dangi-Garimella, PhD, managing editor of The American Journal of Managed Care’s Evidence-Based Oncology (EBO) on how the organization plans to utilize the feedback received to improve the Value Framework, so physicians can use it for clinical decisions at the point of care.

EBO: Who did ASCO invite to participate on the Value in Cancer Care Task Force?

Schilsky: The development of the framework was quite a lengthy process. ASCO convened a multidisciplinary group to participate on the Value in Cancer Care Task Force, which included not only oncologists but also patient advocates and representatives from the pharmaceutical industry, payers, and experts in health economics. During multiple meetings, the Task Force drew up the blueprint for the framework, the initial draft of which was published last June, and we are making revisions to that version as we move forward.

EBO: There are several different value frameworks that providers and payers can use, especially in oncology. What distinguishes ASCO’s Value Framework from the National Comprehensive Cancer Network (NCCN) Evidence Blocks and the Institute for Clinical and Economic Review (ICER) Value Assessment Framework?

Schilsky: From what I know about the landscape, all of these value frameworks—including NCCN, ESMO [European Society for Medical Oncology], DrugAbacus&mdash;they are all evaluating the same information. Some of them have proposed to evaluate clinical benefit or toxicity or cost, but all the information that we used for value assessment comes from published clinical trial literature. I think that’s the big difference from the NCCN approach, which, of course, uses clinical trial data but also considers expert opinion and consensus to define their Evidence Blocks. Our framework, on the other hand, is focused around discussions between doctors and patients.

DrugAbacus aims to help payers and others to establish the best price of a drug based on what its efficacy is; but that is not at all a consideration of the ASCO framework. ICER has used components that are also related to affordability to the healthcare system. While this is a point of consideration, it’s not really the focus of the ASCO Value Framework—our focus is on providing guidance to doctors for discussions with patients. While there are many similarities [with the other frameworks], there are also some important differences.

EBO: Does the Value Framework consider differences between acute versus chronic disease management?

Schilsky: The ASCO framework does not really characterize it in those terms, but we do have 2 different versions of the framework: there’s one for the advanced setting, for the treatment of patients with metastatic disease where cure is not expected to be the outcome, and another version for use in the adjuvant setting, where we are talking about the potential for cure. In either case, the framework can account for what the duration of treatment is, whether it’s a short-term treatment, as can occur in the adjuvant setting, or whether its chronic therapy that might need to be administered over years for the management of someone who has advanced cancer. So the framework can account for either of those cases.

EBO: How about rare versus more common cancers. Are there different considerations under the framework?

Schilsky: Not really. Our framework is really applicable in any kind of a setting; [however,] it works best in a scenario where there has been a prospective randomized trial. Sometimes, in the very rare tumor types, it’s just not possible to conduct a randomized controlled trial because there are not a lot of patients [to be able to conduct such a trial]. However, even in that situation, we are able to use outcomes like response rate that might be reported in a similar trial, as a clinically relevant endpoint in the Value Framework.

Schilsky: The initial version of the framework that was published in June—in the advanced disease setting, when patients are likely to be symptomatic&mdash;does provide bonus points if a new treatment produces significant reduction in cancer-related symptoms. In the revised version of the framework, where we will continue to provide bonus points for symptom palliation, we will also provide separate bonus points for improvement in quality of life. We have not specifically included other PROs in the framework at this point, largely because it’s still quite rare that those are actually captured or reported in clinical trial data.

EBO: Can you speak to physician awareness on the existence of these value frameworks? What has been the feedback from providers and other stakeholders on the ASCO framework?

Schilsky: What we have so far is a “conceptual framework.” But what has been published is not really practical for use at the point of care. What we are planning to do later this year is to develop a software application that incorporates all the elements of the Value Framework into an easy-to-use software that can be used on a laptop or a tablet at the point of care, where doctors can actually use it to engage patients in a conversation [around value]. Once we have that ready to go, we will push that out quite aggressively so it gains widespread adoption.

EBO: ASCO’s CancerLinQ platform2 has promised to have a significant impact on the clinical decision-making process in oncology. Are there plans to weave the 2 tools together?

Schilsky: I think these things will converge over time. One of the limitations of the Value Framework is that there is a lot of information that doctors and patients would like to know that is not actually available in the medical literature—there are significant evidence gaps&mdash;and we expect CancerLinQ to be able to fill in those evidence gaps. In particular, the limitation that we have identified with the Value Framework is that it doesn’t allow doctors to discuss regimens that have not been directly compared to each other in a clinical trial. We hope that CancerLinQ data can be used for that purpose.

EBO: Are there ethical considerations when oncologists participate in the cost/value discussion? Should oncologists be advocates of the societal cost of care?

Schilsky: Oncologists always want to do what is best for their patient. There’s always been concern about oncologists having financial incentives for prescribing more expensive treatments. But a lot of that is going away, considering many of the new cancer drugs are now given orally. Secondly, the way in which physician reimbursement is moving—with the recent Medicare proposal that changes how physicians will be reimbursed for infused drugs3—there will be substantial reduction in physician reimbursement. The entire field is now placing a much greater emphasis on quality and value as a basis of reimbursement. I think tools like the Value Framework will play an important role in helping guide doctors to make valuable clinical decisions.

We have received more than 400 comments during the public comment period following the publication of our framework, and they have helped refine some of the ways in which we assess clinical benefit and toxicity in the framework. We’ll be publishing those soon. This will also contribute to the software application that we plan to build and release later on this year. Once the software is in the hands of treating physicians, it will give us a more realistic picture of how useful it turns out to be. The framework is intended to be a moving document that’ll need to be modified with time, and the Net Health Benefit score will be continuously reassessed with respect to its value, because value can change with different scenarios. We recognize that value assessment is not static, and it’s something that we will continuously monitor. 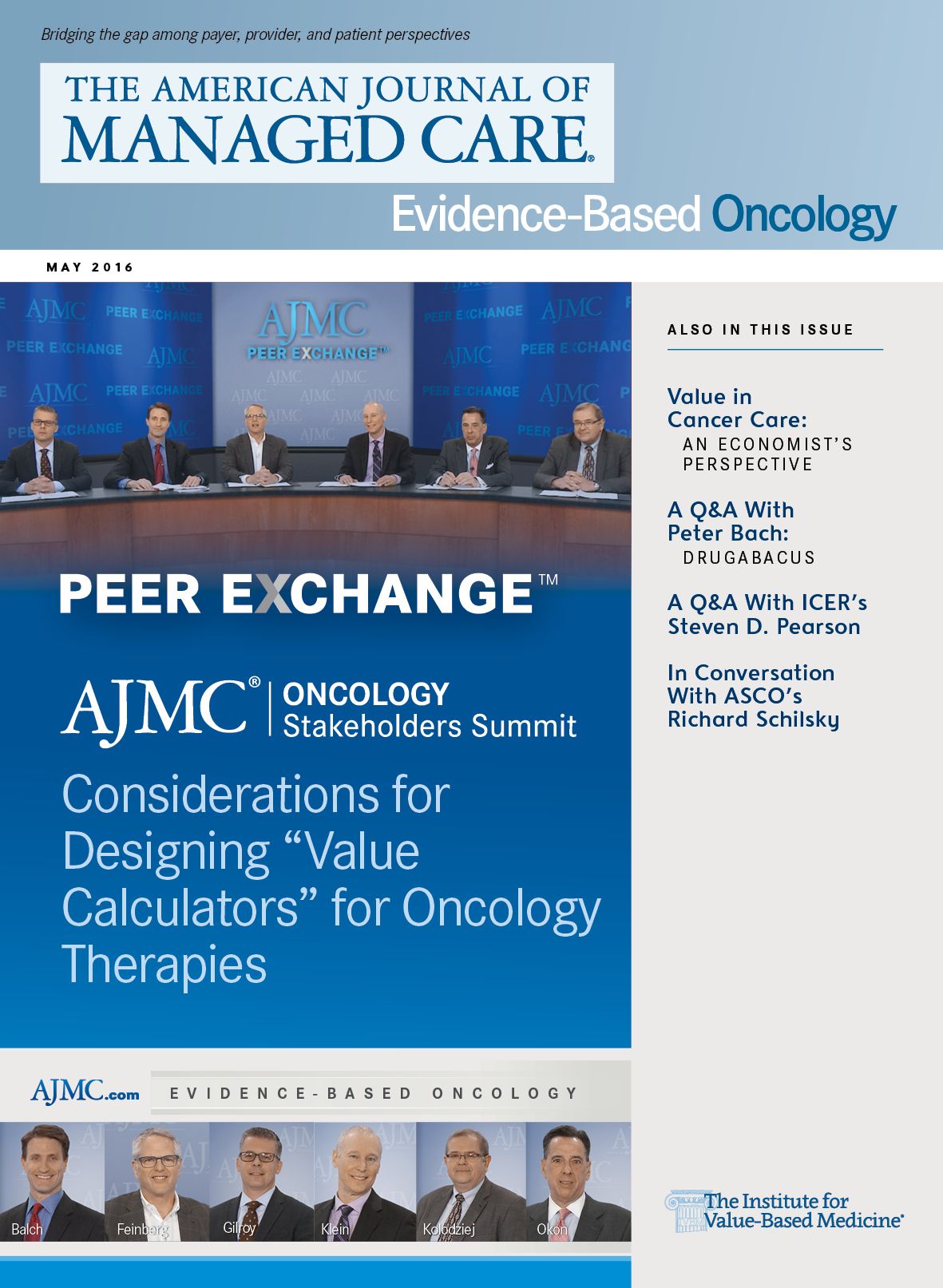