From 2007 to 2018, claim lines1 with diagnoses of Lyme disease increased nationally 117%, according to a new white paper from FAIR Health, a national, independent nonprofit organization dedicated to bringing transparency to healthcare costs and health insurance information. Comparing Lyme disease to other tick-borne diseases, the study draws on data from FAIR Health’s comprehensive repository of over 29 billion private healthcare claim records—the largest in the country.

A bacterial infection transmitted through the bite of blacklegged ticks, Lyme disease historically has been associated more with rural than urban areas. But the new study shows that the growth in claim lines from 2007 to 2018 was more pronounced in urban locations. In urban areas, the increase was 121%, compared to 105% in rural areas—a difference perhaps attributable in part to people seeking care for the disease in or around their urban homes or work environments notwithstanding Report Bughaving contracted Lyme in a rural setting.

Among the white paper’s other findings:

Geographic spread. In 2007, the 5 states with the highest number of claim lines with Lyme disease diagnoses as a percentage of all medical claim lines by state were all in the Northeast, but in 2018, 1 (North Carolina) was in the South.

Gender. In both rural and urban areas in 2018, more claim lines with Lyme disease diagnoses were submitted for females than males (Figure 1). 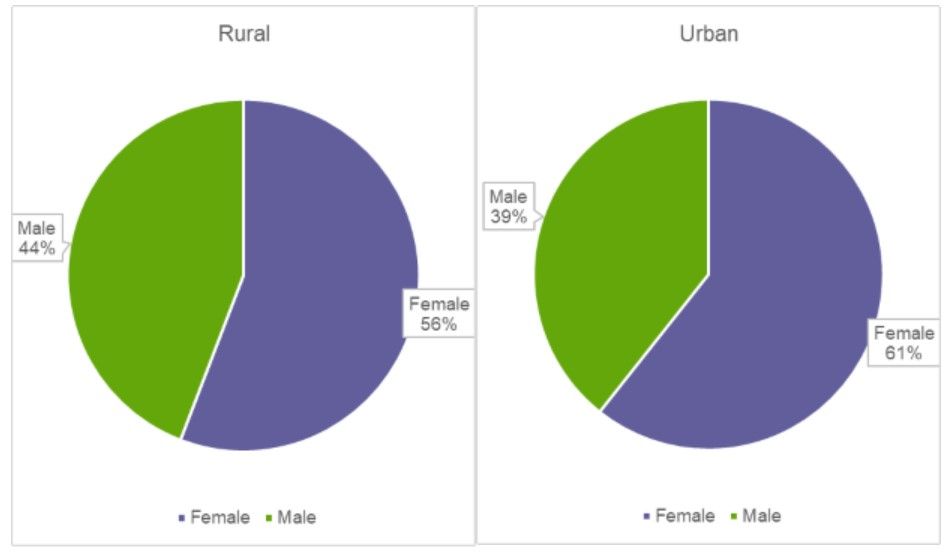 Other diagnoses. In 2018, the 10 most common “other diagnoses” found in patients who had been diagnosed with Lyme disease were, in order from most to least common, general signs and symptoms, dorsopathies (disorders of the spine), soft tissue disorders, other joint disorders, disorders of the thyroid gland, anxiety and other nonpsychotic mental disorders, osteoarthritis, skin and subcutaneous tissue symptoms, dermatitis and eczema, and mood (affective) disorders (Figure 2). All were more common in patients with Lyme disease than in all patients.

Figure 2. 10 Most Common Other Diagnoses by Mid-Level Diagnostic Category in Patients Diagnosed with Lyme Disease (Lyme Patients) versus All Patients, 2018 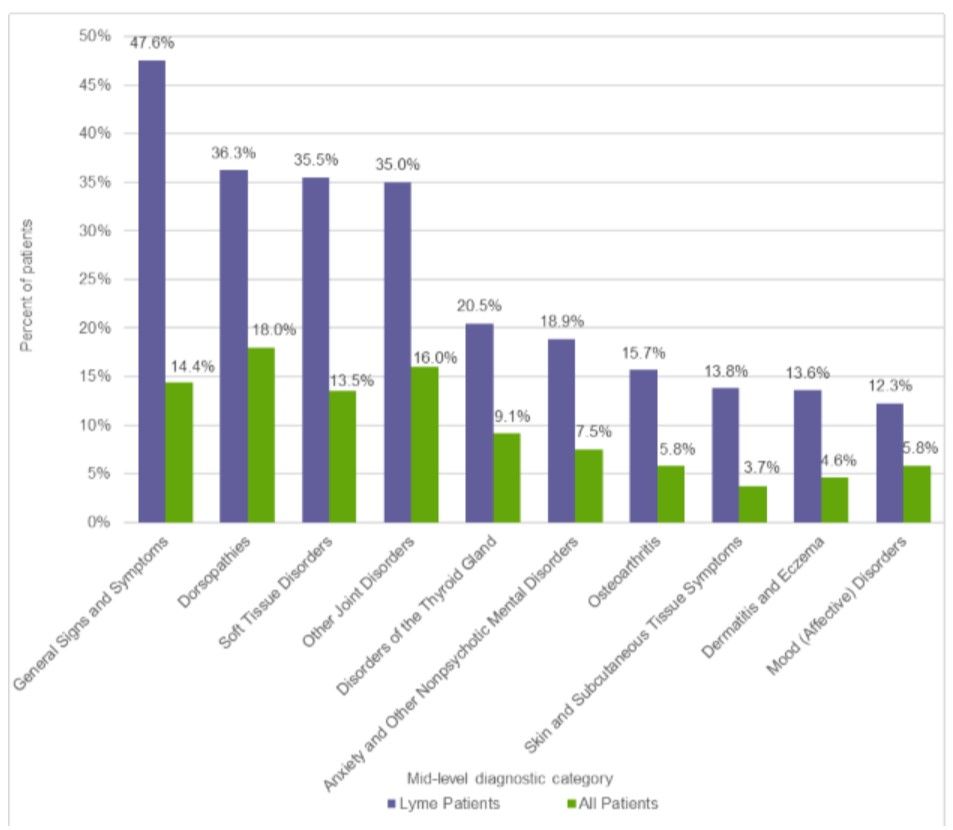 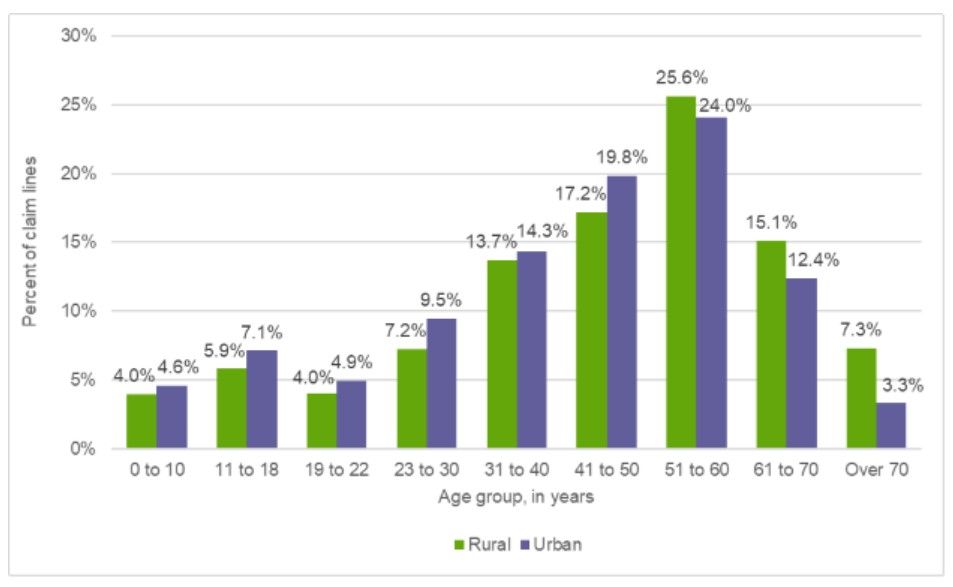 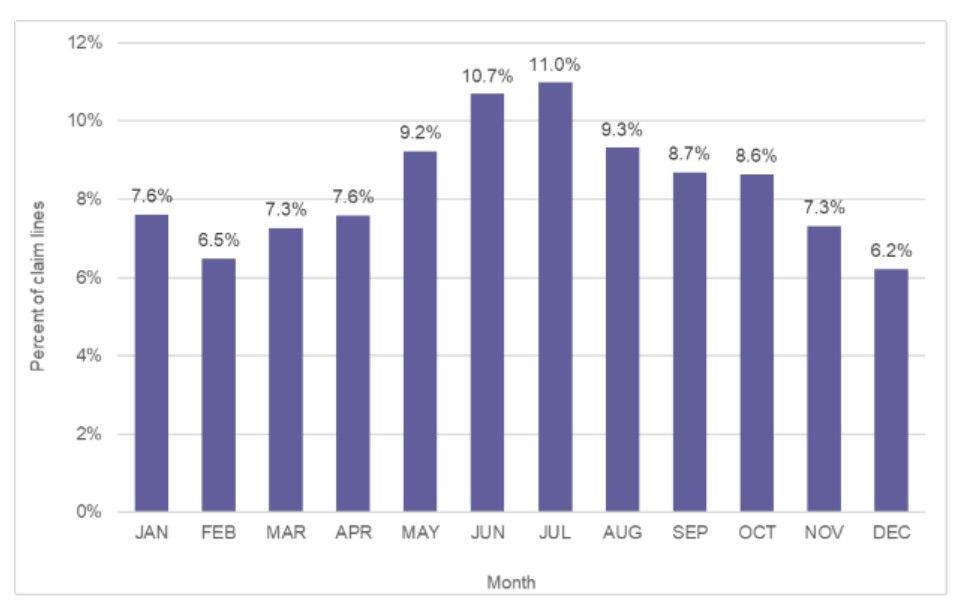 FAIR Health is pleased to use its unequaled data repository to help fill the gaps in knowledge about Lyme disease. Our study provides a foundation to advance the work of other researchers.

Robin Gelburd, JD, is the President of FAIR Health, a national, independent nonprofit organization with the mission of bringing transparency to healthcare costs and health insurance information. FAIR Health possesses the nation’s largest collection of private healthcare claims data, which includes over 29 billion claim records contributed by payors and administrators who insure or process claims for private insurance plans covering more than 150 million individuals. Certified by the Centers for Medicare & Medicaid Services (CMS) as a national Qualified Entity, FAIR Health also receives data representing the experience of all individuals enrolled in traditional Medicare Parts A, B and D; FAIR Health houses data on Medicare Advantage enrollees in its private claims data repository. Robin is a nationally recognized expert on healthcare policy, data and transparency.

Limited affordability and availability make consulting with a gynecologist and receiving surgery for ovarian cancer difficult for many minority women.