Second-line and Third-line Chemotherapy for Lung Cancer: Use and Cost

Objectives: To identify commonly prescribed first-, second-, and third-line chemotherapy regimens for persons with lung cancer and to evaluate the utilization patterns and costs of care associated with receiving these regimens.

Methods: Using health insurance claims from January 1, 2002, through December 31, 2006, patients with lung cancer were identified by International Classification of Diseases, Ninth Revision, Clinical Modification (ICD-9-CM) diagnosis codes. An algorithm was developed to identify first-, second-, and third-line chemotherapy. Patients were stratified by the number of discrete regimens received or by their specific chemotherapy agent or combination of agents. Data were analyzed for up to 2 years from the date of the initial first-line regimen and for 1 year from the second and third lines. Patient costs were based on total reimbursements for each group during the observation period.

There is disagreement about the best strategy for second-line and third-line chemotherapy regimens. Little is known regarding patterns of chemotherapy use and costs of care for persons who receive such treatment.

Lung cancer is the second most common cancer in the United States and is the most common cause of cancer-related death. The American Cancer Society1 estimated that there would be 213,380 new cases of lung cancer diagnosed in the United States and 160,390 deaths from this disease in 2007. Most of these individuals have regional or advanced disease at diagnosis and are eligible for chemotherapy. Many who begin chemotherapy show signs of disease progression or must discontinue first-line therapy because of intolerable adverse effects and are eligible for subsequent chemotherapy with different agents. Second-line chemotherapy can produce symptomatic improvement, objective responses, and modest improvements in survival for patients with advanced disease.2-5 Despite the availability of second and third-line therapies, there is disagreement about the best treatment strategy.6 Little is known regarding patterns of chemotherapy use and cost of care for persons who receive such treatment.

Using data from a large nationwide health insurer, we sought to determine the most common forms of second- and third-line chemotherapy use for persons with lung cancer. We also evaluated key services utilization (hospital days, ambulatory visits, and emergency department visits), and lifetime costs of care following initiation of the second-line chemotherapy regimen to determine if 1 or more regimens had a significant effect on costs of care relative to others (data not shown).

We identified patients with lung cancer from a health insurance database (i3, Ingenix, UnitedHealthcare) representing privately insured patients and individuals enrolled in Medicare + Choice and Medicaid across all 50 states, the District of Columbia, and the US Virgin Islands.7 We searched administrative records for patients diagnosed as having lung cancer between January 1, 2002, and December 31, 2006, who had received at least 1 chemotherapy agent since diagnosis, using International Classification of Diseases, Ninth Revision, Clinical Modification (ICD-9-CM) codes for malignant neoplasm of trachea, bronchus, and lung; malignant neoplasm of pleura; or carcinoma in situ of respiratory system (codes 162.xx, 163.xx, and 231.xx). To eliminate &#8220;false positives,&#8221; patients with ICD-9-CM lung cancer codes for whom lung cancer was being ruled out or patients being treated for other cancers, we required claims records with ICD-9-CM lung cancer codes on at least 5 separate dates of service and no more than 10 dates of service with diagnoses of other common malignant neoplasms that are treated with chemotherapy recorded between 30 days before and 6 months after the initial lung cancer diagnosis (Figure 1).

For inclusion, second-line regimens had to meet the same criteria as the first line, as well as having no more than 3 uncoded chemotherapy visits between the last recorded date of the first-line treatment and the initiation of the second. If the patient received chemotherapy beyond his or her first-line treatment and the pattern of second-line administration did not meet the criteria, the patient was excluded from the analysis. We looked specifically for US Food and Drug Administration (FDA)-approved second-line therapies, including docetaxel, pemetrexed disodium, erlotinib, and gefitinib.

We defined third-line chemotherapy as any third chemotherapy agent with an initial administration date following 2 separate courses of treatment. Because of heterogeneity in prescribing and difficulty in identifying regimens as defined by the PDQ or as labeled by the FDA, agents identified as third-line therapy represent only the first drug given in the third-line setting.

Evaluating Resource Use and Cost of Care

The initial search yielded 30,798 individuals older than 20 years with at least 1 diagnosis code for lung cancer enrolled between January 1, 2002, and December 31, 2006. Applying exclusion criteria ruled out diagnoses of other cancers and reduced the sample to 11,953 patients; of those, 6289 had at least 1 claim record indicating that they had received chemotherapy. After applying restrictions for having a minimum number of agents specified along with an administration code as already outlined, 2523 patients were included in the analysis. Eighty-one percent of these individuals were covered by commercial insurance, 17% through Medicare contracts, and 2% through Medicaid contracts.

Among patients who had second-line therapy, patients receiving docetaxel had recorded claims for the greatest number of months (mean, 8.8 months) after the initiation of therapy, while those receiving erlotinib had the fewest number of claims months (mean, 5.4 months). Because erlotinib did not become available until December 2004, a higher relative percentage of patients began therapy toward the end of the observation period, resulting in a shorter observation time. For second-line therapy, an additional 385 agents or chemotherapy combinations were observed in the data; the most common regimens are given in Table 1.

DISCUSSIONWe conducted an analysis of patterns of utilization and costs of second- and third-line chemotherapy for patients with lung cancer from the perspective of a health insurer. We find that few patients receive second- and third-line therapy. In general, the lifetime costs of care for patients who receive chemotherapy do not vary substantially according to their initial regimen. Rather, what matters is whether they receive second- or third-line treatment.

Monthly costs of care were substantially higher for those receiving second-line treatment and were still higher for patients receiving third-line chemotherapy compared with costs for those receiving only first-line treatment. Expenditures for all services (such as inpatient stays, outpatient visits, and emergency department visits) increased for these individuals. Therefore, the total costs may reflect more intensive management at all levels. Observation times were significantly longer for persons who received second- and third-line treatments compared with those who received only first-line treatment.

During the study period, the use of the tyrosine kinase inhibitors gefitinib and erlotinib grew substantially as agents for second- and third-line therapies, replacing a proportion of injectable chemotherapy agents. Erlotinib seems to have made substantial gains in utilization as a second- and third-line treatment for patients with lung cancer. Following FDA restrictions on the use of gefitinib, this drug is now all but removed from general use in this setting. It is likely that most patients who were candidates for gefitinib are now being treated with erlotinib. It is unclear whether erlotinib is replacing other chemotherapy agents in order of treatment preference. It is clear that erlotinib is not being used substantially as a third-line agent for those who fail second-line therapy.

A modest proportion of patients who began chemotherapy received third-line chemotherapy. Most patients were given few administrations of third-line agents, and the intervals between administrations were irregular. This is understandable because survival is poor overall for patients with lung cancer, and it is likely that most patients who showed signs of progression after second-line treatment died before having the opportunity to receive third-line treatment or they or their physicians decided that the costs (monetary and treatment-related morbidity) of further treatment were not justified by the expected survival difference.

Non&#8211;small cell lung cancer comprises approximately 80% of all lung cancer cases. During the period of this analysis, 4 agents (docetaxel, pemetrexed, gefitinib, and erlotinib) were approved for use as second-line therapy in patients with refractory non&#8211;small cell lung cancer. For small cell lung cancer that progresses after initial treatment, agents that have shown activity as second-line treatment include oral etoposide, etoposide-cisplatin, cyclophosphamide-doxorubicin&#8211;vincristine sulfate, lomustine-methotrexate, paclitaxel, and topotecan hydrochloride.19 Our data suggest that a substantial fraction of chemotherapy used in second-line settings is inconsistent with FDA labeling or is not supported by clinical studies. This determination, combined with the finding of wide variation in the use of agents, suggests a need for quality improvement. Of note, persons who received chemotherapy that is not FDA approved had higher costs than those who used approved therapies in the second-line setting, although the absolute difference (stated as PPPM cost) is modest overall.

Funding Source: This study was supported by an unrestricted grant from Genentech, Incorporated.

Author Disclosure: Dr Ramsey receives grant support from Genentech. Dr Martins receives grant support from Amgen, Eli Lilly, Genentech, Infinity, and Pfizer. He is also a paid consultant for Genentech and reports receiving honoraria from Eli Lilly and Genentech. Dr Lubeck and Dr Reyes own stock in Genentech and are past and present employees, respectively, of that company. Dr Blough and Dr Tock report no relationship or financial interest with any entity that would pose a conflict of interest with the subject matter of this article.

Download PDF: Second-line and Third-line Chemotherapy for Lung Cancer: Use and Cost 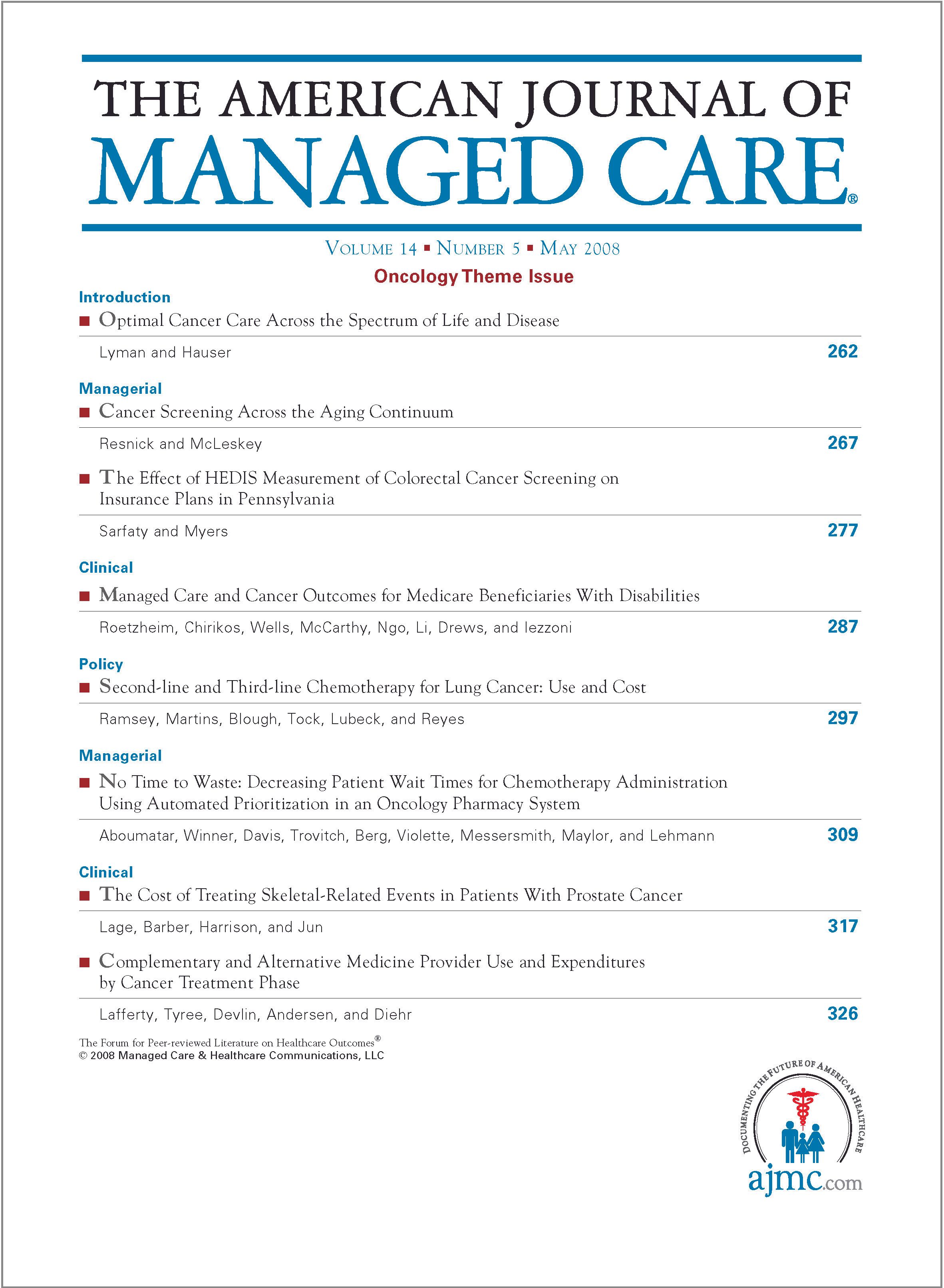 List of Peer Reviewers (2007)
Is Disease Management Effective? Well...Some is.
Complementary and Alternative Medicine Provider Use and Expenditures by Cancer Treatment Phase
The Cost of Treating Skeletal-Related Events in Patients With Prostate Cancer
No Time to Waste: Decreasing Patient Wait Times for Chemotherapy Administration Using Automated Prioritization in an Oncology Pharmacy System
Second-line and Third-line Chemotherapy for Lung Cancer: Use and Cost
Managed Care and Cancer Outcomes for Medicare Beneficiaries With Disabilities
The Effect of HEDIS Measurement of Colorectal Cancer Screening on Insurance Plans in Pennsylvania
Cancer Screening Across the Aging Continuum
Optimal Cancer Care Across the Spectrum of Life and Disease
Related Videos
Related Content