NCCN Melanoma Guideline Update: It's About Immunotherapy and Targeted Therapy

At the National Comprehensive Cancer Network 21st Annual Conference, John A. Thompson, MD, presented an update on where the field of melanoma treatment stands today.

Immune checkpoint inhibitors, successful combination therapy approaches, oncolytic virus—treatment options for patients with advanced melanoma have made tremendous strides in the last 2 years. At the 21st Annual Conference of the National Comprehensive Cancer Network (NCCN), in Hollywood, Florida, John A. Thompson, MD, who has joint appointments at the University of Washington School of Medicine, Fred Hutchinson Cancer Research Center, and Seattle Cancer Care Alliance, presented an update on where the field stands today. 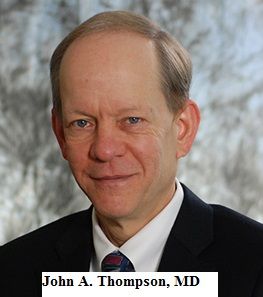 “The last 5 years have witnessed a major change in the treatment of melanoma,” Thompson said. “We now have molecularly targeted agents and PD-1 agents approved by the FDA for treating melanoma.” He showed data of a trial conducted back in 1993, when options for advanced melanoma patients were quite limited. The study did not follow stage IV patients beyond 3 years, as opposed to stage I to stage III patients who were followed for over 10 years.

Role of Checkpoint Inhibitors in Melanoma

In the NCCN Guidelines version 2.2016 for melanoma, the CTLA-4 inhibitor ipilimumab has moved to second line or beyond in the metastatic or unresectable disease.

In ipilimumab registration trials, patients were randomized to receive ipilimumab plus a vaccine (gp100) or vaccine alone or ipilimumab alone (MDX010-20). Another trial evaluated ipilimumab with a chemotherapy agent DTIC (dacarbazine) compared with placebo and DTIC (CA184-024). In MDX010-20, ipilimumab alone and in combination with gp100 had much better separation of the Kaplan Meier overall survival curve, compared with the vaccine alone. Additionally, the tail of the curve plateaued out, and longer term survival studies with ipilimumab as monotherapy are now ongoing, evaluating a 10-year follow-up.

Thompson told the audience that in evaluating patients in the clinic who are being treated with immunotherapy, it is important to remember that we sometimes have to wait till the immune response has been sufficiently activated. Disease progression is often observed before the patients respond to treatment, a phenomenon described as “pseudo-progression.” Thompson emphasized that healthcare providers need to be aware of this when treating patients with these immune checkpoint inhibitors.

Ipilimumab can trigger numerous immune-related AEs (irAEs), said Thompson, and physicians need to familiarize themselves with the toxicity profiles of these agents. irAEs vary from pruritis and rash to gastrointestinal symptoms like diarrhea and bowel perforation, as well as endocrine and neurological effects. He emphasized the importance of patient education on irAEs. “Early recognition of symptoms and early intervention are very important,” said Thompson. And patient advocates agree that there’s lack of information and a lot of unknowns as far as irAEs are concerned.

The data have been very promising for melanoma, Thompson told the audience, as is evident from the approval of nivolumab and pembrolizumab, both PD-1 inhibitors, in the treatment of melanoma. Studies have observed months of stable disease and a high rate of complete or partial response (CR or PR) in patients with refractory melanoma who were treated with nivolumab. Similarly, very encouraging results have been observed with pembrolizumab in ipilimumab-refractory advanced melanoma patients.

Not everyone responds to these checkpoint inhibitors, and there could be multiple reasons for this, said Thompson. “With respect to immunostaining for biomarkers, there are a wide variety of methods being used and there still is a lack of convergence on percentage of staining for positivity.”

Thompson then showed data from the CA209-067 study that compared nivolumab alone, ipilimumab alone, and the combination of nivolumab and ipilimumab in treatment-naïve individuals diagnosed with unresectable or metastatic melanoma. The trial found that patients in the combination arm had a much better progression-free survival and higher overall response rate (ORR) than those treated with nivolumab alone. “However, importantly, grade 3/4 toxicities were also higher with the combination in half the patients in that treatment arm,” Thompson said. “So we need to be mindful of that.” The trial concluded that the combination works better in this patient population, especially among individuals who express less than 5% PD-L1 protein.

Clinical studies have also evaluated ipilimumab as adjuvant therapy in resected high-risk stage 3 melanoma, an example being the EORTC 18071/CA184-029 study. Thompson showed trial results that found significantly improved recurrence-free survival in patients treated with ipilimumab, which resulted in the drug being approved for patients in this category as adjuvant therapy.

However, treatment-related deaths were observed in 1.1% of patients, he said, including colitis, myocarditis, and neurological symptoms.

The Talimogene Laherparepvec (T-VEC) oncolytic virus has been found to improve durable response rates in patients with advanced melanoma. “The attenuated virus does not kill healthy tissue and causes tumor cells to secrete GM-CSF, followed by cell lysis,” said Thompson. He shared data from a trial comparing T-VEC vs GM-CSF in patients with advanced melanoma found T-VEC resulted in a durable response in 16% of patients, as against 2.1% in the GM-CSF arm. Further, CR was 10.8% vs less than 1%, PR was 15.6% vs 5%, and ORR was 26.4% vs 5.7%, respectively in the T-VEC and GM-CSF arms, the study found.

The last part of Thompson’s talk focused on combination regimens of BRaf-MEK inhibitors being used in first line therapy, especially in patients in whom a rapid antitumor response is necessary. The Combi-d study, he showed, evaluated BRaf (dabrafenib) and MEK inhibitors (trametinib) as first line in patients with BRAF V600E/K metastatic melanoma. Longer term follow-up showed a significant difference in the tail of the survival curve between dabrafenib alone and in combination with trametinib, and the response seems to plateau out at 34 months into treatment.

“Immunotherapies as well as targeted therapies are offering better outcomes,” said Thompson. “I believe we need to assess the patient and their ability to bear toxicity, as well as their ease of access to a clinic. This should decide the intensity of their therapeutic intervention.”

1. Preferred therapy for an early response is:2. For all other cases:For BRaf wild type melanoma:

Thompson concluded with a series of questions that currently elude the field. “What should be the duration of therapy? Do we have predictive biomarkers? Should combination therapy or sequential therapy be administered?” Studies are ongoing to answer these unknowns.