Young Adult Smokers: Are They Different?

Study Design: Mail survey with phone follow-up of age-stratified members of a large midwestern health plan to identify current and former smokers, followed by a second follow-up survey of this subgroup 12 months later.

Conclusions: Higher rates of smoking among young adults donâ€™t reflect less interest in quitting, fewer quit attempts, or less success in quitting compared with older adults. However, their reports of receiving or using much less help in quitting suggest that health plans and clinicians might be able to increase this groupâ€™s cessation with more active support.

This project was conducted at HealthPartners, an integrated healthcare system providing medical services through a large network of owned and contracted clinics. As one of the largest healthcare organizations in Minnesota, HealthPartners provides coverage to more than 670 000 members. About 30% of these enrollees receive care in 1 of the 22 multispecialty owned clinics (HealthPartners Medical Group).

To increase the response rate, we limited the baseline survey to 15 questions over 2 pages. We conducted a cognitive pretest of the instrument with health plan members (n = 16) before administration to the entire sample, and made minor changes. The follow-up survey used the same smoker categories, but items were added to assess change in smoking status between baseline and follow-up. The follow-up survey also included questions about use of cessation services. The format and content of follow-up questions were based on information gathered from focus group members (n = 7), who also completed a pilot version of the instrument.

Contingency tables and Pearson ?2 tests were used to compare the younger (age 18-24 years) and older (age 25-65 years) subjects. We initially compared 3 age groups: 18-24, 25-44, and 45-65, but the latter 2 groups were so similar that reporting on all 3 groups only served to confuse the comparisons.

Different subsamples of the data were utilized for different analyses. The sample of all baseline survey completers was utilized to describe the sociodemographic characteristics of survey respondents and to estimate smoking prevalence. The subsample of baseline survey completers who were current smokers was used to describe respondents with respect to sociodemographic characteristics, smoking frequency, quit interest, and quit attempts. Respondents who completed the 1-year follow-up survey and who also were former smokers, nondaily smokers, or daily smokers at baseline comprised the denominator in an analysis describing changes in smoking status over time. Respondents who completed the follow-up survey and who were daily smokers at baseline served as the denominator for analyses describing smoking behavior and quit interest at the follow-up as well as quit activities undertaken in the 12 months before the follow-up.

To test whether quit rate differences (ie, not smoking at follow-up) by age group among daily smokers (11.4% for younger adults, 12.7% for older adults) existed after controlling for the higher cigarette smoking frequency and addiction found in the older adult group, we conducted a logistic regression analysis predicting nonsmoking status versus daily or nondaily smoking at follow-up. This model used only data from individuals who were daily smokers at baseline and included predictors of age group (younger/older), amount smoked at baseline (>10 cigarettes per day vs =10 cigarettes per day), and whether smoking occurred within 5 minutes of waking (yes/no). The age group association still was not significant (odds ratio = 0.65; 95% confidence interval = 0.37, 1.14) but continued in the direction observed in the bivariate analysis, with a lower quit rate among the younger compared with the older daily smokers. Computing follow-up quit rates for baseline daily smokers within strata defined by either the amount smoked at baseline or smoking within 5 minutes of waking yielded similar results, with quit rates always directionally lower among younger than older adults, but never statistically significantly different (data not shown).

Characteristics of Daily and Nondaily Baseline Smokers 1 Year Later Table 3 summarizes the smoking and quitting behaviors at follow-up of the 578 individuals identified as daily smokers and the 308 identified as nondaily smokers in the baseline survey, some of whom were not smoking at follow-up. Among daily smokers, young adults were more likely to report making quit attempts in the past year, but much less likely to use any resources to aid them in those quit attempts. They primarily had tried to quit cold turkey and infrequently reported using help from a doctor or medical clinic. Among nondaily smokers there were far fewer differences by age group, with younger smokers less likely to use icotine-replacement therapy or help from a doctor or medical clinic.

In the follow-up survey, we had asked daily smokers at baseline to report on clinician actions at their most recent doctor's office visit. Among those who reported any medical discussion of smoking (66.9% of young adults and 72.5% of older adults; P = .15), similar proportions of younger (98.1%) and older (98.4%) adults reported being asked whether they smoked. Younger and older smokers also were equally likely to report being asked to quit smoking (77.6% and 74.9%, respectively). But older adults were more likely to report being asked by a clinician to set a quit date than younger adults (19.3% vs 9.4%; P = .004), and marginally more likely to have a clinician suggest that they use a cessation medication (31.6% vs 23.4%; P = .07).

Impact of Local Smoking RestrictionsOn March 31, 2005 (about 4 months before our follow-up survey), smoking bans in restaurants and bars went into effect in several cities and counties in the metropolitan area, including Minneapolis and St. Paul. In the follow-up survey we asked current smokers whether the new smoking restrictions were causing them to smoke less or to try to quit. More than a third of younger adults reported smoking fewer cigarettes compared with about a quarter of older adults (37.2% vs 24.7%; P = .001), but younger adults were just as likely as older adults to report trying to quit because of the restrictions (16.2% and 13.5%, respectively).

This study provides previously unavailable information directly comparing the smoking-cessation patterns and behaviors over time of a broad sample of younger and older adult smokers. Compared with the older adults, the young adults were lighter, less frequent smokers who were still fluctuating in their smoking behavior over time. Contrary to popular belief, they were as interested in quitting, more likely to make quit attempts, and as likely to have quit 1 year later. However, their quit attempts were much more likely to be made without medication or counseling assistance, and they were much less likely to have received help from medical sources. (As plan members, these young adults had greater access to assistance and medications, so the finding that so few use smoking-cessation aids is even more striking.) New environmental restrictions on public smoking were at least as likely to affect their smoking as that of older adults, perhaps in part because this age group tends to spend more time in restaurants and bars.9

What makes these findings particularly important and unique is that these subjects were broadly representative of younger and older smokers in Minnesota. At least in Minnesota, where only 6% of the population is uninsured and most low-income people on medical assistance are included in health plan rolls through a contract with the state, an insured population reflects the community quite well. This is important because most of the existing literature on smoking and cessation behaviors of young adults comes from studies of the minority who are students in 4-year colleges or are in the military.10-15 In a separate analysis of the young adult responders in this study, we demonstrated that college students are more likely to smoke fewer than 11 cigarettes per day and to have quit smoking at follow-up and are much less likely to smoke daily and to smoke immediately on awakening.16 However, we confirmed in this more representative sample the 3 separate studies of DeBernardo et al, Hines, and Morrison et al in college students, who also found that cold turkey was the predominant method for quit attempts, and there was little interest in assistance.11,13,15 We also confirm the findings of Schoenborn and colleagues, who found based on 1997-1998 National Health Interview Survey data that 54.2% of all smokers age 18-24 years had tried to quit smoking in the year prior to the survey, compared with 43.5% of those age 25-44 years and 39.4% of those age 45-64 years.17

These findings have many implications for interventions in this high-risk age group. Although more adults age 18-24 years smoke compared with older adults, these younger smokers are just as ready to quit, and they might quit in larger numbers if given more encouragement and support. Physicians and medical care organizations should pay particular attention, because these young smokers reported receiving much less help than older smokers did. That may be part of the reason why those young smokers who tried quitting were much less likely to use medications or other support, but recent studies both confirm our results and suggest that young adults have negative attitudes toward traditional smoking cessation approaches.18,19 Physicians seem well placed to change this pattern if they implement practice systems that make it more likely that individualized support and assistance are provided, going well beyond the usual Ask and Advise sections of the Public Health Service clinical guideline Treating Tobacco Use and Dependence.20 Health plans also might develop programs to reach out to assist those young smokers interested in quitting instead of assuming that they have to be persuaded to quit.

We chose to focus on these comparisons between younger and older adult smokers because the much higher rate of smoking in young adults and their status as the smokers of the future require greater efforts to encourage and support their cessation interests. Moreover, we specifically did not conduct logistic regression analysis of cessation predictor variables because we believe that such statistical findings are of dubious value for targeting interventions and distract from the main usable conclusions. These findings instead highlight the comparability of young adult smoking behaviors and interests, and what health plans, medical clinics, and individual physicians need to know to take action.

This study's limitations include the fact that all of the respondents are health plan members who provided self-reports. The response rate to the follow-up survey was lower than hoped and lower than that of the original survey, probably because we have demonstrated that smokers are known to be less likely to respond to surveys about this habit.5 In addition, young adults had lower response rates to both the baseline and follow-up surveys, potentially leading to an exaggeration of differences between them and older smokers. However, significant differences in response rates to the follow- up survey by age group were found only among those who were not smoking at baseline. Thus, quit rates and other characteristics (eg, quit behaviors, medical assistance for quitting) computed at follow-up for those who were smoking at baseline are unlikely to be affected by differences in response rates to the follow-up survey.

These results should be useful to policymakers, health promotion planners, and those in medical settings who want to reduce smoking prevalence by paying greater attention to the age group who have the highest prevalence of smoking and who will form the smokers of the future.

Funding Source: Any public dissemination of information relating to the grant was made possible by Grant Number RC-2006-0011 from ClearWay MinnesotaSM. The contents of this article are solely the responsibility of the authors and do not necessarily represent the official views of ClearWay Minnesota.

Author Disclosures: The authors (LIS, RGB, MM, SEA, MJT) report no relationship or financial interest with any entity that would pose a conflict of interest with the subject matter of this article. 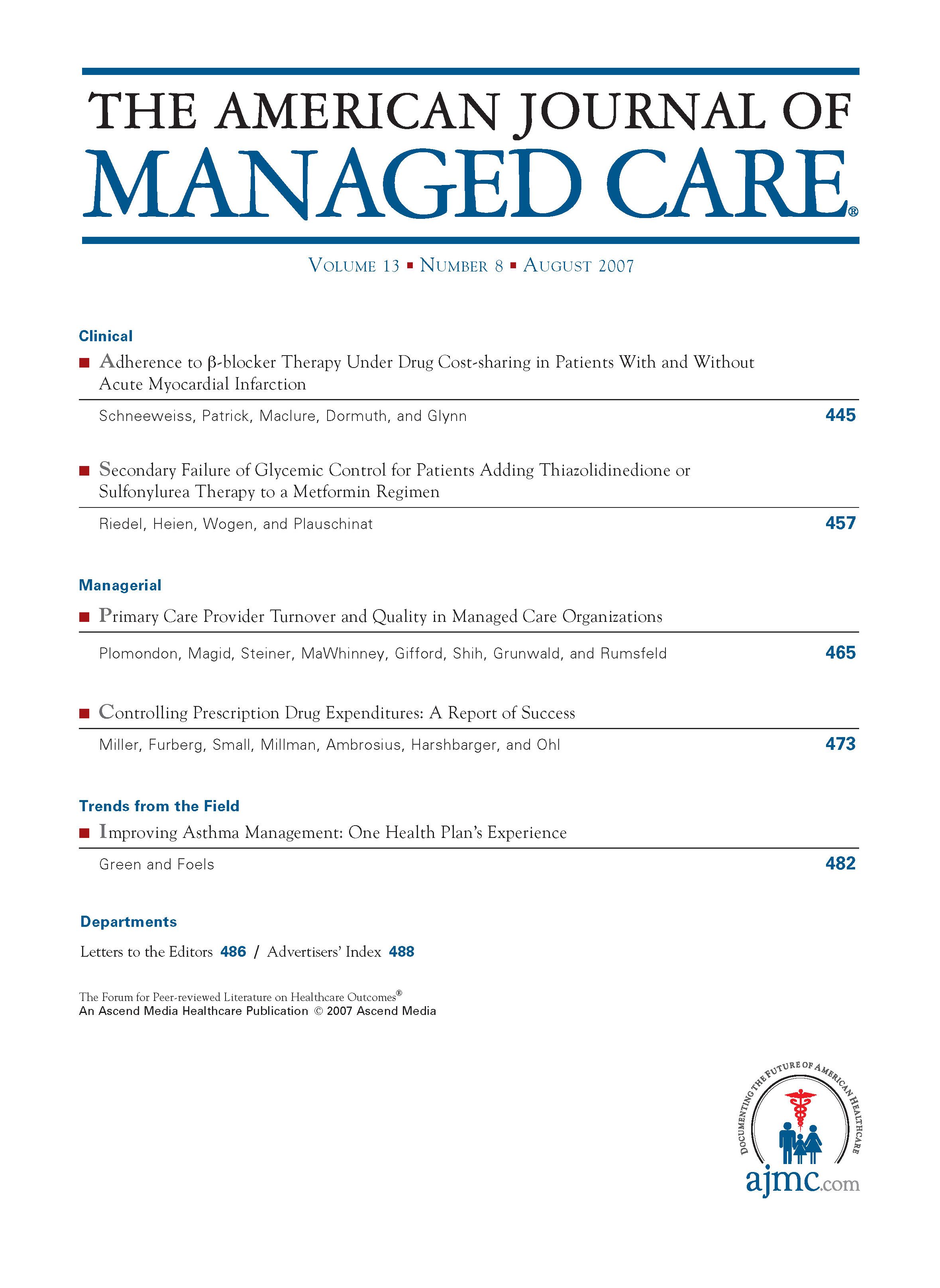