Enrollment in a consumer-driven health plan does not appear to encourage enrollees to become active, informed managers of their own health and healthcare.

Objective: Underlying consumer-driven health plans (CDHPs) is the belief that the financial incentives, enhanced choices, and increased information will stimulate consumers to become active, informed managers of their own health and healthcare (ie, activated consumers). To examine this assumption, we assessed whether enrollees became more activated after enrolling in a CDHP and the degree to which those who were more activated adopted productive health behaviors.

Methods: This was a longitudinal study of employees of a large manufacturing company where a CDHP was offered along with a preferred provider organization in 2004. Two waves of survey data were collected with a final sample size of 1616 employees.

Results: The hypothesis that enrollees in a CDHP become more activated over time was not supported. However, the data suggest that those who were more activated were more likely to engage in the behaviors that CDHPs seek to encourage and to newly adopt these behaviors over time. This appeared to be true regardless of plan type.

Conclusion: Even though CDHPs do not appear to foster activation, they may provide a supportive environment for those who are more activated to manage their health. Encouraging enrollment based on enrollee readiness to take advantage of the CDHP environment may be more productive than relying on plan designs alone to activate enrollees once they are enrolled.

Consumers who are more actively involved in managing their own health and healthcare (ie, activated consumers) are more likely to enroll in a consumer-driven health plan (CDHP), but these plans do not appear to foster activation among their enrollees.

Enrollment in consumer-driven health plans (CDHPs), although still relatively limited, continues to grow.1 One of the key appeals of the CDHP to employers is the belief that the financial incentives, enhanced choices, and increased information will stimulate consumers to become active, informed users of healthcare. In fact, an explicit goal of the CDHP approach is to encourage consumers to be better managers of both their health and their healthcare (ie, activated consumers).2

Evidence is emerging that consumers do change their behavior when in a CDHP. Consumers in CDHPs appear to be more cost-sensitive and reduce utilization and expenditures compared with those who stay in plans with traditional designs.3-5 Studies indicate that at least some of the reductions are for necessary care, including the discontinuation of prescription drugs for chronic diseases. Some studies indicate that CDHP enrollees are more likely to seek out information than those in a preferred provider organization (PPO).1-3 Finally, there is some evidence that more activated consumers are more likely to enroll in a CDHP in the first place.6 Thus, the evidence is mixed as to whether CDHP enrollment stimulates enrollees to become more active, informed managers of their health and healthcare.

In this analysis we examine the degree to which CDHP enrollees become more activated (take a greater role in managing their health and healthcare) after enrolling in a CDHP, and the degree to which those who are more activated adopt productive behaviors (eg, information-seeking, healthy). One hypothesis is that CDHP enrollment, with its incentives and information supports, encourages consumers to be actively in charge of their health. Alternatively, it may be that those who are already more activated are able to better manage within a CDHP, engaging in healthproducing behaviors. Finally, both hypotheses may be true.

Specific research questions were the following:

&#8226; Health information-seeking: Respondents were asked whether they had done each of the following in 2004 (or 2005 for the follow-up survey): (1) used any Web site for health information, (2) were persistent in asking a doctor to explain something until it was understood, and (3) used a telephone advice nurse or health coach.

Other research has found that the mode of survey administration can have an independent effect on responses, particularly questions sensitive to the influence of social desirability.13 To control for any influence on responses that may be caused by mode of administration (Web or telephone,) we included mode as a control variable in multivariate analyses.

We began with an examination of degree to which these behaviors occurred in the baseline year (2004) in a CDHP-enrolled population and in the PPO-enrolled population. This analysis establishes the base rate of the behaviors in the 2 plan designs. Then we assessed the degree to which activation predicted each of the behaviors within each plan design. Next we examined the degree to which activation predicted the adoption of a new behavior in the second year of observation within each of the plan designs. That is, if the behavior was not performed in 2004, was it newly adopted in 2005? Also, to what degree does baseline activation predict the adoption of a new behavior? A sizable number of employees switched plan enrollment between 2004 and 2005. Of the 623 employees who were in the PPO in 2004, 269 (43%) switched to the CDHP in 2005. Of the 960 employees who were in the CDHP in 2004, 12 (1%) switched to the PPO in 2005. Because we wanted to observe what happens to people over time, we excluded the switchers from the analysis and only included those whose plan enrollment was stable from 2004 through 2005. Thus, the analysis followed a cohort of enrollees over the study period.

In the next step in the analysis, we examined activation as a predictor of the performance of any of the examined behaviors and in the adoption of any of them as new behaviors. CDHP enrollees went from an average 2004 activation score of 64.1 to a score of 64.5. PPO enrollees went from an average Table 3a shows the percentage of respondents scoring in the upper half of the PAM who either engaged in or did not engage in each of the examined behaviors in 2004. The data were broken out by plan enrollment type. Those who were more activated were significantly more likely to engage in 2 of 3 of the information-seeking behaviors whether they were enrolled in either the CDHP or the PPO. Those who were more activated also were more likely to engage in all 3 of the healthy behaviors than were those who were less activated. However, this was true only for the CDHP enrollees.

The findings suggest that those who are activated will do better in either plan design. They are more likely to seek out information to inform choices and engage in healthy behaviors than those with lower activation levels both in PPOs and CDHPs. Even though CDHPs do not appear to foster activation, they may provide opportunities for those who are more activated to better manage their health.

We do know that interventions specifically designed to support activation, such as the Stanford Chronic Disease Self-management Course, do significantly increase activation.11 Thus, it is possible to increase activation through targeted support. The CDHP does not appear to provide such support.

It should be noted that the baseline survey in 2004 was 6 months after initial enrollment in the CDHP. It is likely that adoption of new behaviors occurred most frequently in those first 6 months. It is not possible to sort out the degree to which the behaviors reported in 2004 among the CDHP enrollees were newly adopted or long-standing behaviors. A further limitation of the study is that the behaviors themselves were self-reported.

Thus, CDHPs, with their greater access to information, may be a good choice for those who are more activated and prepared to take on a more active role in managing their health and healthcare. It may be more useful to think about encouraging enrollment based on enrollee readiness to take advantage of the CDHP environment rather than relying on such plans to activate enrollees once they are enrolled.

If CDHPs alone do not activate enrollees, then the key policy question remains: what will stimulate consumers to become more effective managers of their health and healthcare? The healthcare costs that accrue because of unhealthy behaviors and poor self-management are increasingly well documented. Health insurers, employers, and other healthcare payers are exploring a number of strategies, including incentivizing specific behaviors, to influence consumer behaviors. The efficacy of these approaches is largely unknown. The findings reported here indicate that consumer activation is key to predicting a range of positive consumer behaviors. Testing approaches that stimulate activation may be a more efficient way to yield healthy consumer behaviors than trying to incentivize 1 behavior at a time.

Funding Source: This study was funded by the Health Care Financing and Organization initiative of the Robert Wood Johnson Foundation.

Author Disclosure: Dr Hibbard reports receiving royalties from the Patient Activation Measure and reports owning stock in Insignia Health. Mr Tusler reports having served as a consultant to Insignia Health, the company that markets the Patient Activation Measure. The other author (JG) reports no relationship or financial interest with any entity that would pose a conflict of interest with the subject matter of this article.

Download PDF: Plan Design and Active Involvement of Consumers in Their Own Health and Healthcare 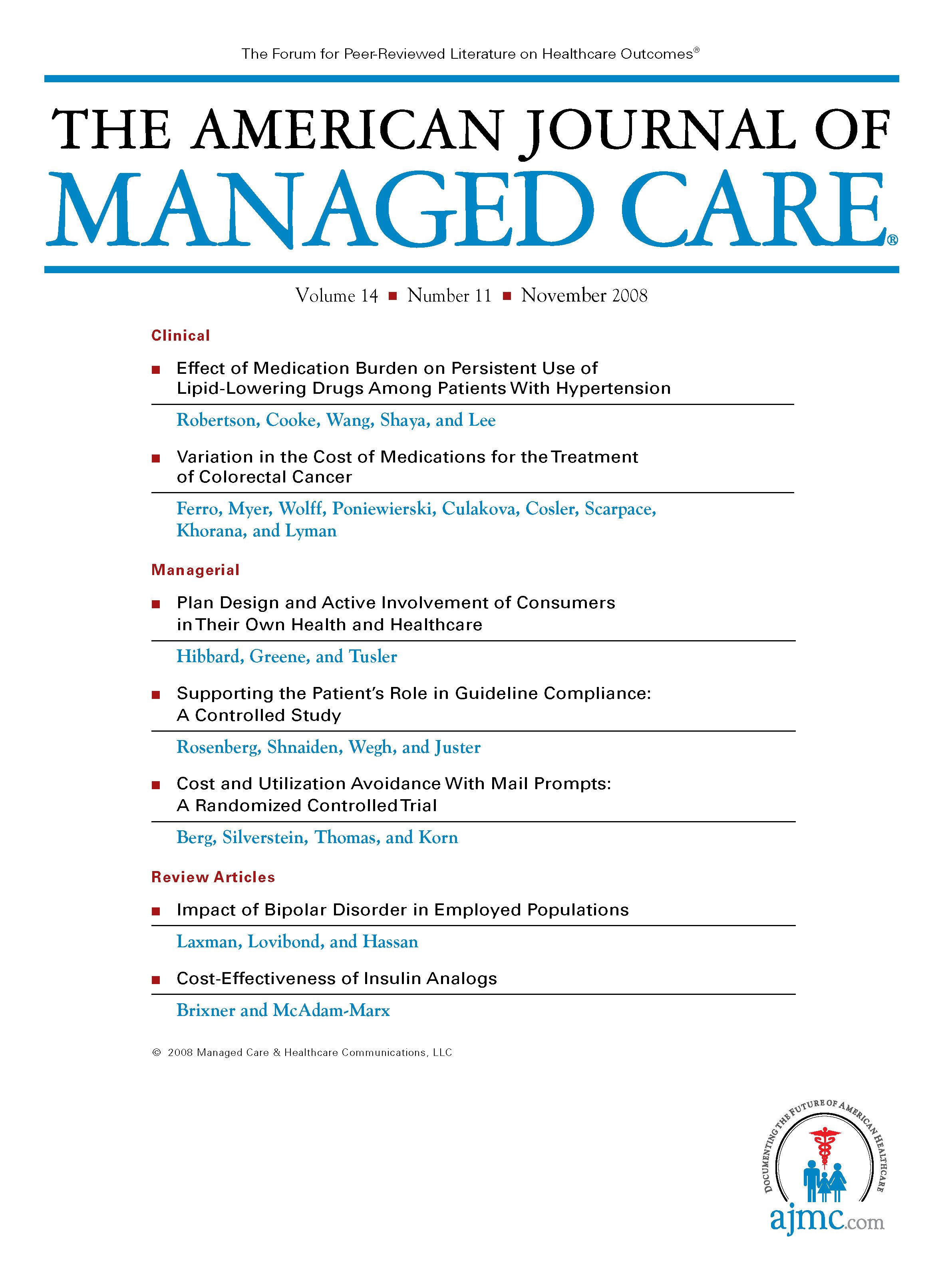 Return on Investment for Bariatric Surgery
Cost-Effectiveness of Insulin Analogs
Impact of Bipolar Disorder in Employed Populations
Cost and Utilization Avoidance With Mail Prompts: A Randomized Controlled Trial
Supporting the Patient's Role in Guideline Compliance: A Controlled Study
Plan Design and Active Involvement of Consumers in Their Own Health and Healthcare
Variation in the Cost of Medications for the Treatment of Colorectal Cancer
Effect of Medication Burden on Persistent Use of Lipid-Lowering Drugs Among Patients With Hypertension
Related Videos
Related Content