ABSTRACTObjectives: To measure the impact of a local patient safety intervention and a national guideline to reduce unnecessary red blood cell (RBC) transfusions in the Department of Medicine of an academic medical center.

Study Design: This was a retrospective, pre-post study.

Methods: In May 2013, a clinical practice guideline, modeled after the 2012 AABB recommendations for RBC use, was implemented with the goal of decreasing unnecessary RBC transfusions. This was done using a previously developed model for change management in the Department of Medicine that included academic safety conferences, e-mail safety alerts, and feedback to providers on global blood product utilization. Data regarding the utilization of RBC products were obtained for the time before the AABB guideline, after the AABB guideline but before the local intervention, and after the local intervention (January 2011 through March 2014).

Results: Blood product use started to decline after the AABB guideline, but dropped much further after the focused, local interventions were implemented. The proportion of patients receiving a transfusion decreased from 12.6% prior to the AABB guideline to 8.8% after the intervention (P <.001). The percent of total blood use with a hemoglobin level above 8 g/dL decreased from 20.2% to 12.4%; the total units of RBCs transfused per 100 discharges also decreased from 33.4 to 21.7. The direct RBC costs per discharge dropped from $61.60 to $39.70.

Conclusions: Passive adoption of restrictive transfusion guidelines was shown to reduce blood product use on general medicine floors of an academic medical center, but the effect was greatly improved after a local, targeted intervention to improve patient safety was implemented.

Although clinical guidelines are an important component of moving toward value-based care,12 they have had a limited effect on changing physician behavior to date. Barriers to changing physician behavior include a lack of awareness about a guideline, lack of understanding about how a guideline applies to a physician’s practice, lack of consensus about the importance or relevance of a guideline, and its conflict with a physician’s current routine or training. Furthermore, adherence can be affected by “outcome expectancy,” or the belief that following the guideline will not significantly impact patient outcomes, and is thus not worth implementing into practice. Finally, many physicians may lack the resources needed to follow guidelines.13,14 Educational interventions to increase the adoption of guidelines, such as large conferences, small-group interactive sessions, and academic “detailing” have also been met with mixed results.14-16

Although the effectiveness of education interventions is unclear, organizations that successfully adopt evidence-based practices often have a culture that supports continuous quality improvement. The purpose of this study was to evaluate the impact of the AABB guideline and a subsequent education intervention that was grounded in continuous quality improvement methodology on RBC use at an urban academic medical center.

In May 2013, the Department of Medicine at a large, urban academic medical center implemented an education intervention to integrate the AABB guidelines into practice. The intervention began with a patient safety conference for all residents and hospitalists. The conference consisted of a literature review presented by educators and an analysis of local practice patterns, and ended with recommendations. Following the conference, safety e-mail alerts were sent from June to October 2013, to all physicians, reminding them to comply with AABB guidelines when ordering transfusions.

Clinical data were retrieved from the organization’s electronic health record, and cost data were obtained from the organization’s cost accounting system. Institutional review board approval was obtained prior to data collection. Data were separated into 3 time periods: “Pre-AABB Guideline” was defined as discharges occurring between January 1, 2011, and February 28, 2012; “Pre-Intervention” included discharges occurring between March 1, 2012, and May 31, 2013; and “Post-Intervention” consisted of discharges between June 1, 2013, and March 31, 2014.

The first part of the analysis included all patients discharged from general medicine floors. A χ2 test was used to test the association between time period and whether a patient received a transfusion. This association was also tested through a binary logistic regression model controlling for patient age, sex, race/ethnicity, diagnosis category, primary payer, and LOS.

There was a decrease in the proportion of patients receiving a transfusion with hemoglobin >8 g/dL, which fell from 20.2% of patients Pre-AABB Guideline to 14.8% of patients Pre-Intervention to 12.4% Post-Intervention (P <.001). This decline translated to an overall decrease in average pre-transfusion hemoglobin concentrations across all 3 time periods, decreasing from 7.4 ± 1.0 Pre-AABB Guideline to 7.0 ± 1.4 Post-Intervention (P <.001). A decline in the units of blood transfused with hemoglobin >8 g/dL also dropped from 5.9 ± 3.1 to 2.4 ± 1.6 units per 100 patient discharges throughout the study period (P =.004) (Table 3).

The study aim was to determine whether an educational intervention to promote the AABB guideline was successful in decreasing unnecessary transfusions. The results suggest that the initial drop in transfusions between the Pre-AABB Guideline and Pre-Intervention periods may have been due to passive adoption of the AABB guidelines. However, the larger drop between the Pre- and Post-Intervention periods highlighted the effectiveness of an active intervention in further reducing the number of transfusions and suggests this targeted approach may hasten the adoption of clinical practice guidelines.

This study demonstrated that a restrictive transfusion strategy will translate into significant cost savings. Our estimate of just over $131,000 in savings per year was for units that use less than 10% of our institution’s total RBC products and excluded the significant indirect expense of RBCs, including storage, transportation, and waste. Most importantly, there are likely substantial downstream decreases in hospital-acquired complications, mortality, and length of stay from adopting a restrictive transfusion strategy.

The success of this educational intervention provides insight into how hospitals can facilitate the adoption of evidence-based guidelines. Although educational conferences, seminars, and reminders have shown mixed results in changing physician practice, such interventions can be successful when embraced by leadership, implemented in a suitable safety culture, and when they seek maximum physician engagement.12,18 Our local intervention was aided by a strong commitment to quality improvement and high-value care, as well as buy-in from leadership.

There are several limitations in this study. This intervention was studied within 1 department, and the intervention’s applicability to other medical centers or departments must be considered. This study was conducted at a teaching hospital with resident physicians, and it is plausible that its trainees are more likely to adopt guidelines because they are early in their career. Furthermore, although the statistical analysis suggests that the education intervention was responsible for the greater drop in transfusion rates, it is difficult to separate its impact from the global awareness of AABB guidelines in the medical community. Finally, it is important to note that the transfusion rate also decreased among patients with hemoglobin levels below 8 g/dL—an unexpected effect considering the education intervention should have only reduced the transfusion rate among patients with hemoglobin levels above 8 g/dL. This may have been due to physicians following a stricter guideline for some GI bleed patients, where evidence shows an even lower hemoglobin threshold of 7 g/dL to be more appropriate.7,10

This analysis provides insight into the effectiveness of interventions used to guide physician behavior toward evidence-based practices. The results indicate that there was a significant decrease in transfusion rates, patients receiving transfusions above a hemoglobin level of 8 g/dL, total units of RBCs transfused, and the cost of RBC transfusions across all 3 time periods. Following evidence-based guidelines can be a crucial step in the transformation toward value-based care and reducing waste in the healthcare system. This study validated a fundamental approach to guideline adoption with the goal of improving patient safety, but also demonstrated the potential for cost-savings associated with the achievement of safer care. 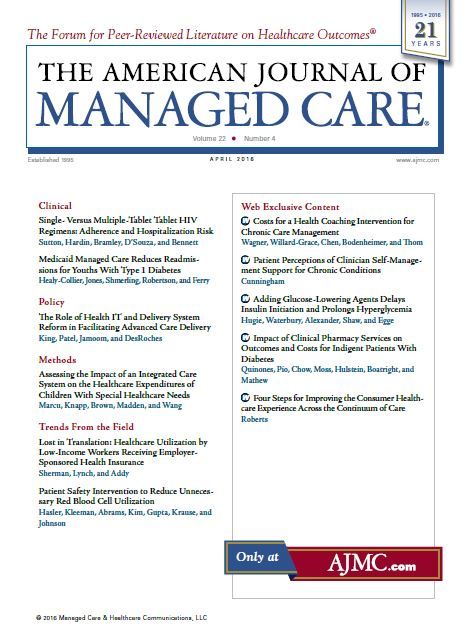