My role as a patient was simple-accept the suffering I had to endure. But it becomes hard to find the line between when to suffer and when to question.

Cancer is kind of like childhood. When you’re in the midst of it, you assume that everyone has it exactly the same as you—whether that’s weekends at the lake or afternoons with Cytoxan. But eventually, if you’re lucky, you make it out in 1 piece and attempt to live a “normal” life. Over time, you even accrue little nuggets of wisdom and information here and there that make you realize this experience is much bigger than you could have ever imagined. Although everyone went in with good intentions, mistakes were made, things slipped through the cracks, and now you’re left as the owner of the consequences of those decisions, good or bad.

I’m 25 years old right now. Thinking back to when and how I was diagnosed at 16 years old is difficult. For all intents and purposes, I found out that I had cancer as a child. I relied on my parents for everything. I relapsed 7 times over the next 7 years, effectively growing up with my cancer, taking time off from high school and college to get treatment. I watched friends graduate and accept internships while I smoked weed and watched SportsCenter on my dad’s couch.

My role as a patient was simple—accept the suffering I had to endure. There was no way out except through a gratuitous amount of suffering. And that’s fine; that’s the way it is. But it becomes hard to find the line between when to suffer and when to question. When do you put your foot down and demand a second opinion, more pain medications, less treatment, or more treatment?

Some things about my experience were really hard. I lost my left leg to an amputation. I was given a drug that wrecks male fertility, and nobody told me. It wasn’t until I relapsed years later and had to take the same drug again that I was told that my fertility was ruined.

The realist in me knows that suffering is part of the human experience and that I’m in no way unique in my suffering. But I don’t think that should give doctors, nurses, and other healthcare providers a free pass on the nuanced aspects of adolescent and young adult healthcare.

As I learn more about myself as a person, I see that I’m bad at asking for help, that I’m good at enduring pain, and that I hate to inconvenience others. Which might not be the best combination for a cancer patient. Sitting in an exam room with my oncologist, the options seem very black and white—what she recommends and what she doesn’t&mdash;but that negates an entire world of other opinions that could save my life.

If I could give my 16-year-old self any advice when I was diagnosed, I would probably tell him that it’s going to suck a lot. Your cells are going rogue and the fact that they are turning on you in no way reflects on you as a person. There are a lot of people out there who want to help you, and it won’t hurt that much for you to let them. It’s worth putting in the extra effort to get it right instead of jumping into something quickly because you feel that’s what you’re supposed to do. Also, girls named Heather are trouble and should be avoided.

Woody Roseland is a 25-year-old 8-time cancer survivor. On any given day you can find him with his head in the clouds at Cheeseman Park in Denver, Colorado. He enjoys photography and bike rides. Woody pays his rent by producing short films for companies and nonprofits. Woody is an active member and advocate for the adolescent and young adult cancer community, working to raise funds for fellow cancer patients and survivors. A couple of nonprofits Woody believes in are Pelotonia and First Descents, and he thinks it would be cool if you gave them a couple dollars.

Download PDF: Picking Up the Pieces - Thoughts on Cancer by a 25-Year-Old 8-Time Cancer Survivor 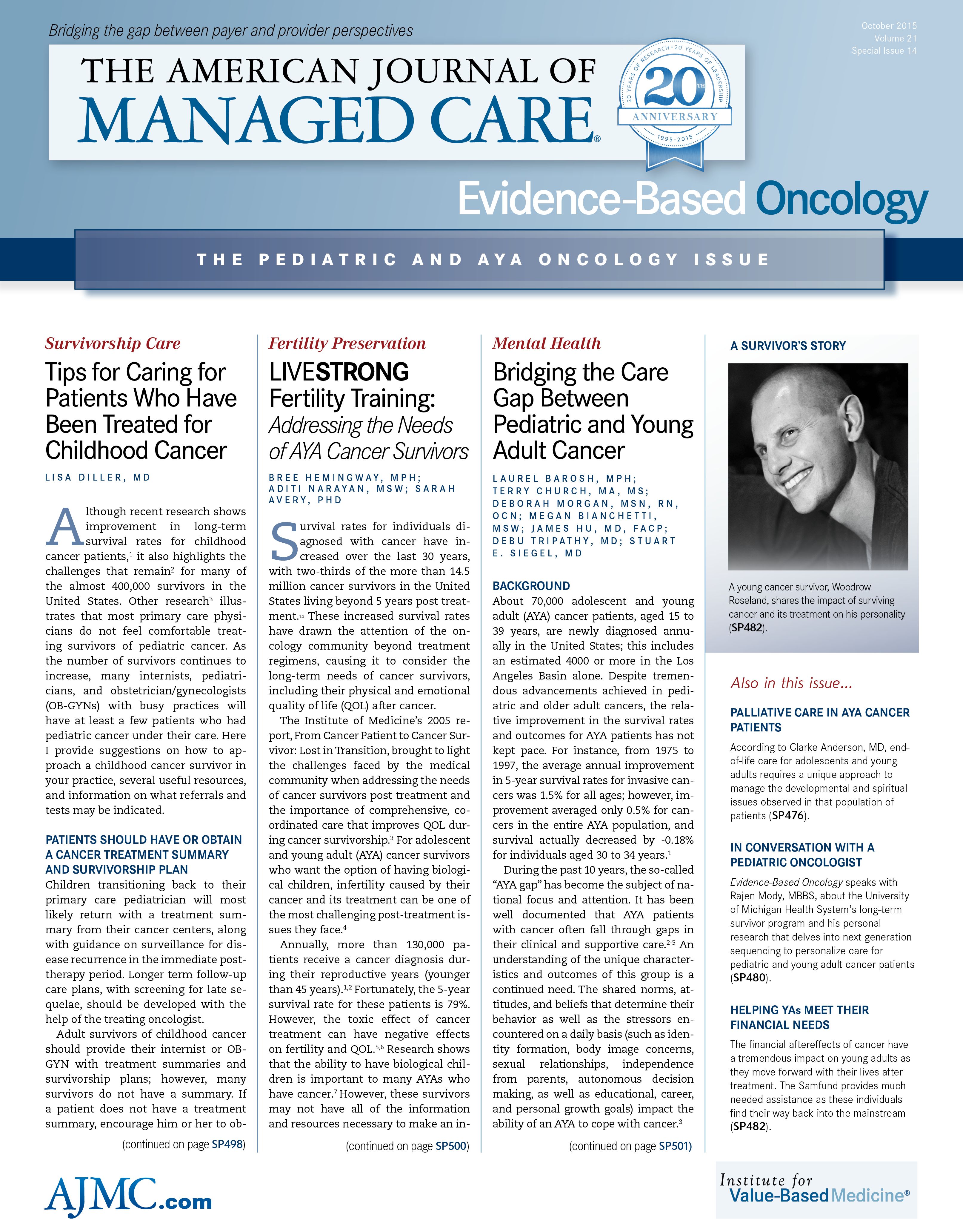 Financial Toxicity and the Young Adult Cancer Survivor
FDA Updates in Oncology
Using a Gene Expression Assay to Predict Response to NAC in Breast Cancer
Managed Care Updates in Oncology
The Need to Raise Awareness for Young Adult Cancer Care
Pediatric Oncologist A Firm Believer in the Potential of Next Generation Sequencing
Sticking Up for the 340B Program
Bridging the Care Gap Between Pediatric and Young Adult Cancer
Treatment of Acute Lymphoblastic Leukemia in Adolescents and Young Adults
Picking Up the Pieces - Thoughts on Cancer by a 25-Year-Old 8-Time Cancer Survivor
Coordinated, Personalized Care to Improve AYA Outcomes
The Challenge of Palliative Care for Adolescents and Young Adults
LIVESTRONG Fertility Training: Addressing the Needs of AYA Cancer Survivors
Tips for Caring for Patients Who Have Been Treated for Childhood Cancer
Related Videos
Related Content