This interview is edited slightly for clarity.

Participants in the Oncology Care Model (OCM) have speculated greatly about what will come after the 5-year pilot program ends on June 30, 2021.1 The suspense ended November 1, 2019, when the Center for Medicare & Medicaid Innovation (CMMI) unveiled a request for information (RFI) regarding Oncology Care First (OCF), a proposed successor model that would build on the lessons learned from OCM. When the RFI was released, CMMI had already scheduled a listening session for November 4, 2019, on the future of the OCM, and the short comment period left some stakeholders uneasy (The orginal 3-week comment period was extended to December 13, see Cover).

But Kashyap Patel, MD, the chief executive officer of Carolina Blood and Cancer Care Associates—a leading OCM practice&mdash;and associate editor of Evidence-Based Oncology™ (EBO), said he’s optimistic. As cochair of the Payment Reform Committee for the Community Oncology Alliance, Patel took part in the listening session with CMMI’s Christina Ritter, director of the Patient Care Models Group, as well as Lara Strawbridge and Hillary Cavanaugh, who are developing the successor model for CMMI. A few days later, Patel shared his early thoughts on the OCF with EBO.

EBO: Everyone has been waiting to see what will happen with the OCM as we look toward the end of the 5-year model. What do you think have been its biggest successes?

PATEL: That’s a very nice question. You’ve touched my heart, because I always believed we have the resources, technology, and intelligence to shift care from volume to value—and the OCM was the primer for that. There has been a large learning curve over the past 3 years. After the model was announced, we had 197 practices become a part of that. It took a learning curve of about 2 years, so far, for everyone to figure out what was expected of us, but now almost 80% of practices have reached success in addressing the benchmark prices [for cancer therapies], as well as improvement in the quality of care. So, the OCM has really allowed us to explore the road map to success in the transition from volume to value.

EBO: There was an element of surprise when CMMI released the RFI for Oncology Care First. Can you discuss the nature of the RFI and your initial reaction?

PATEL: It was very interesting. I was speaking on 2-sided risk at the Association of Community Cancer Centers conference in Orlando, Florida, in the last session. I was talking about the OCM and the future of the OCM, and we also had Alexandra Chong [PhD,] from CMMI, speaking right after I was done. And as I headed out of the room, I saw this [news] flash saying that CMMI had announced the RFI for Oncology Care First. So, it was a surprise, but it was a pleasant surprise for me. I am an eternal optimist. As an oncologist, I deal with the chance of 15% to 20% survival every day of my life, and so to see something like OCF coming out on Friday afternoon made my weekend. The reason is because we’re all worried about what is going to happen after 5 years. We’ve made a substantial improvement in the way we are dealing with care, but it’s coming with a price—we’ve had new employees, we’ve changed the way we work; [there are] new technology investments, new CT [computed tomography] scan machines. And when I look at all the investment, I was getting anxiety [to the point] where I was losing sleep: What will happen once the summer of 2020 comes and OCM is kind of over? And when I saw the OCF model, I was happy.

There is a little skepticism because CMS had scheduled a listening session for Monday [November 4, 2019]. Now, when there is an announcement from CMMI on Friday afternoon at 4 p.m. [November 1, 2019], the first reaction from many of my colleagues was “Oh, so they didn’t want to give us time to ask questions.” And I put it

differently. I said, “Look, they actually designed the model. We asked for an extension [for deciding whether to move to 2-sided risk]. Lara Strawbridge [of CMMI] and Dr [Anand] Shah [of CMS], as well as other stakeholders, designed a new model pretty much along the same line of what it is right now. They’ve incorporated a large number of elements that we requested, and they’ve continued to work with us. And at the listening session, they opened up the podium to continue to work, and this is not onetime.…They’ll be writing comments, we’ll be writing comments—it’s more like a collaborative work.

One concern that everyone had was the short turnaround time for the comment period (later extended). [From] the time they announced the model, there is a 3-week timeline....People are getting ready for travel, so these were some of the elements of surprise. But I still feel that there has been a genuine intention on the part of CMMI, as well as the team, to consider what has progressed over the past 3 years to accommodate continuation of the model.

EBO: During the listening session, it appeared that CMMI tried to incorporate feedback from oncologists about appropriate ways to hold practices accountable for drug costs. Can you discuss areas where OCF reflects provider feedback?

PATEL: OCF is built on the success of the OCM as a pilot experiment. One of the challenges we had was patient attribution—we did not know when it was going to happen. In the OCF model, CMMI has promised us they will be updating [attribution data] every month so there will not be an element of surprise. Second, we were struggling with the drug costs. For example, the newer therapies, such as immunotherapies, could be much higher compared with benchmark prices, and they’ve actually looked at novel therapies in a much more robust way. And the third thing was the trend factor&mdash;the cancer-specific trend factor. [These are] 3 big elements that we’ve always been struggling with in the original model, and CMMI has promised and considered how they will adjust the pricing model based on these 3 factors.

EBO: A point that you raised during the listening session, with support from Barbara McAneny, MD, who developed the COME HOME model, was the concern about the handling of electronic PROs [patient-reported outcomes]. Disbursement of technology among cancer patients is very uneven. Can you discuss your concerns with ePROs?

PATEL: Absolutely. As soon as Lara Strawbridge said they were incorporating ePROs, my eyes went all over—I said, “I have patients who don’t have a smartphone. They still use a flip phone.” They live in areas where there aren’t even cell phone towers. Depending on the access to the technology, the ePRO reporting could be quite variable. At the same time, I want to be sure we respect technology, so our suggestion and request to CMMI&mdash;and we will be commenting on this, as well&mdash;will be to collect the ePROs at the point of care, when the patient comes to the clinic. We would invest more in the technology; we could buy some iPads so our employees could sit down with the patients to help them [record responses]. But we don’t want to make it very burdensome. Patients are sick. They have many more issues. To ask them to answer a hundred questions [at every appointment] may make them very tired. So, we want to create a balance between the expectations of the technology and dissemination of knowledge, and at the same time respect the patients’ ability and capacity to work with us.

EBO: Is it appropriate to have caregivers take part in the ePRO initiative?

PATEL: Caregivers could be a critical part of ePROs, but if patients have flip phones, then I don’t expect caregivers will have smart phones, either. We’re talking about patients living paycheck to paycheck. They don’t have secondary insurance. They don’t have transportation. So, for them to have technology and pay $100 a month for access to the internet may be too much to expect. But we definitely would work with them, or our employee would work with them, to figure out how to do the ePRO. Or, maybe at some stage, we could have that done at a home visit, taking the technology along with creating a temporary hot spot to ensure that we fulfill the expectation. At the same time, we want to have some sort of balance between the expectation of the ePRO and what we can deliver.

EBO: What other takeaways did you have from the listening session?

PATEL: I was elated to see the enthusiasm among my colleagues—with skepticism. Whenever government comes in with some program, there is always some skepticism.…But on the whole, I see an environment of collaboration, a cooperative and conducive environment to improve the quality of care for cancer patients.

There’s also an element of risk they expect us to take—small downside risk. And although that could be a matter of concern for many practices, when you look at the alternate path, the MIPS [Merit-based Incentive Payment System] track, MIPS has a 9% downside going from 2021 onward anyway.2 So, with either track, you have risk involved.References 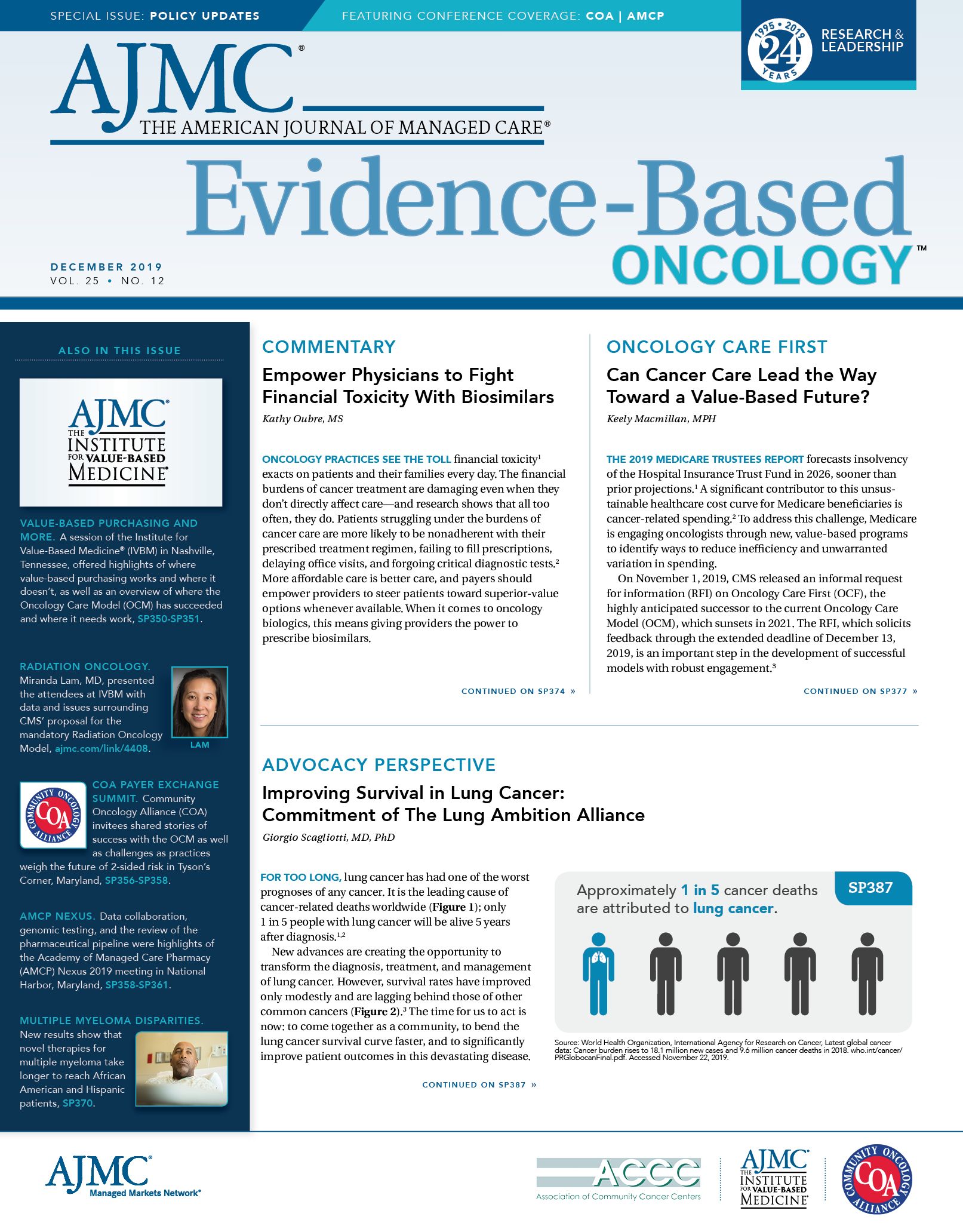 The Biden administration has said it would give 60 days notice before ending the public health emergency, which was set to end April 11, and the national emergency was set to end March 1.