Early mortality rates for patients with multiple myeloma (MM) have significantly decreased over the last 20 years; however, more efforts are needed for older patients, who still experience high rates.

Although early mortality (EM) among patients with a new multiple myeloma (MM) diagnosis has decreased since 1999, EM rates remain high among those over age 70, suggesting that more strategies should be explored to improve outcomes in these patients, investigators concluded.

The nationwide study from the Netherlands, published in Blood Cancer Journal, is the most extensive population-based analysis that offers a comprehensive look on the frequency of and risk factors associated with EM, including the impact of first-line therapy on EM.

“The design and conduct of forthcoming prospective intervention studies for patients at risk for EM are essential to establish recommendations for better supportive care or individualized, less toxic, anti-MM therapies to further reduce EM in this patient population,” wrote the investigators.

Novel agents and autologous stem cell transplantation have improved the population-level survival of patients with MM; however, EM is still a significant clinical issue in the MM population, especially for older patients. Risk factors for EM have been identified in previous clinical trials, but trial populations differ substantially from the general MM population because the enrollment of elderly patients and patients with comorbidities is often limited. Additionally, information on disease-related features is lacking.

“Understanding the determinants of EM may translate into improved supportive care and individualized treatment strategies,” said the investigators.

They collected data from the Netherlands Cancer Registry on patients 18 years and older who received a new MM diagnosis between 1989 and 2018, with survival follow-up data through February 1, 2021. Cohort 1 was designed for all patients who received their diagnosis between 1989 and 2018 (N = 23.323) and cohort 1a (n = 5360) was classified for patients diagnosed between 2014 and 2018 due to more data being made available for patients who got their diagnosis after January 1, 2014.

The a median age at diagnosis was 70 years for the entire study cohort, which was 55% men. A majority (88%) received their diagnosis in nonacademic centers, and 13% had prior malignancies.

Of the entire cohort, 4984 (18%) patients died within 180 days of receiving their diagnosis. EM was lower among younger patients and decreased over time in all 5 age categories (Table). 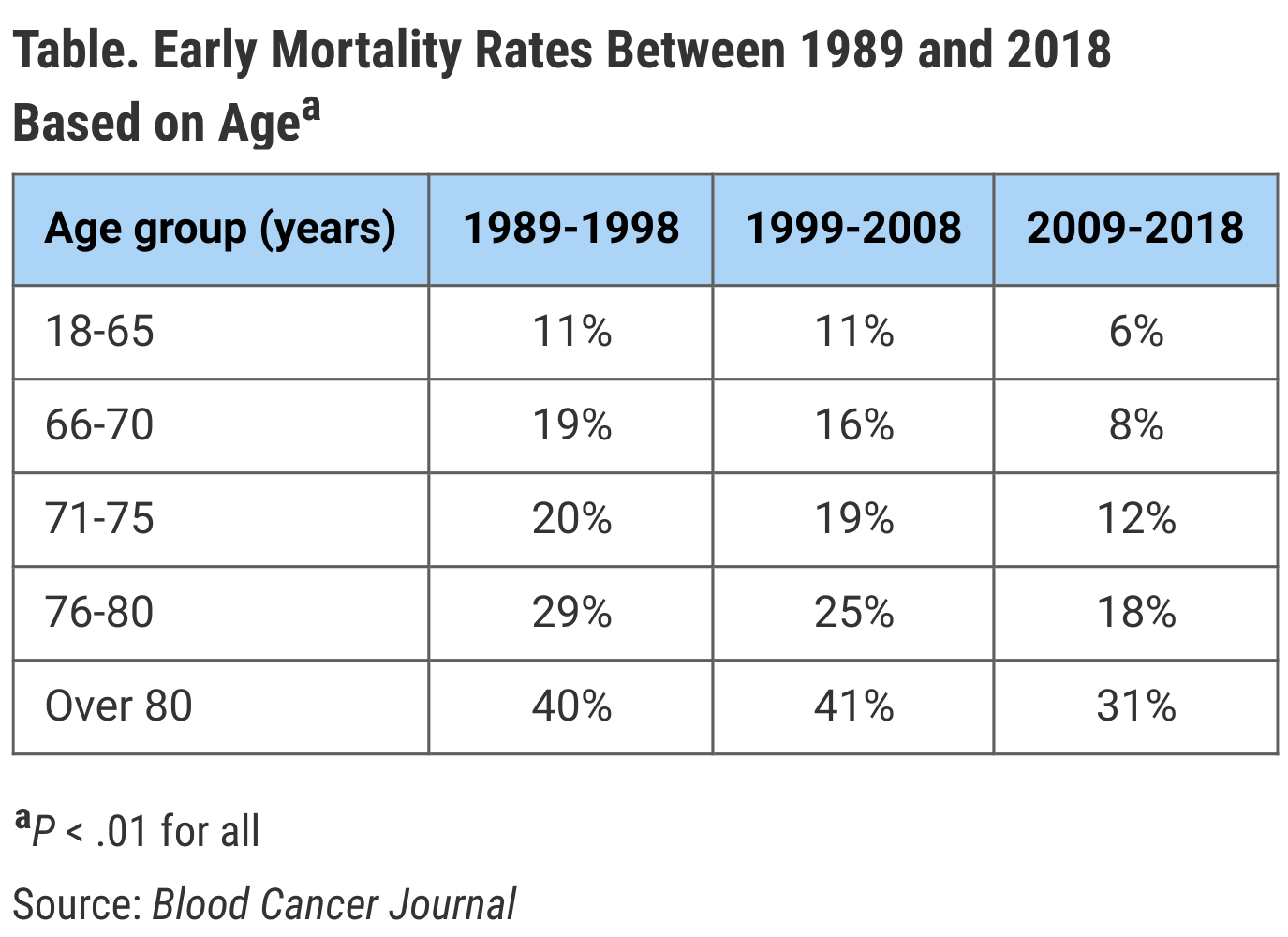 Additionally, relative survival improved significantly across the 3 calendar periods, from 27% between 1989 and 1998 to 52% between 2009 and 2018, with the most pronounced increase occurring for younger patients. For cohort 1, increasing age and male sex were found to have independent associations with increased EM risk.

Overall, 9% of the entire cohort never received anti-MM therapy, of whom 72% experienced EM. Additionally, 6% of the cohort were offered a wait-and-watch approach until disease progression or development of symptoms. The proportion of patients who never received therapy increased with older age and was significantly higher in patients with EM compared with those without EM.

With increasing age, the proportion of patients who received a treatment regimen involving 2 or 3 novel agents decreased from 42% for patients aged 18 to 65 years to 0% for patients older than 80 years.

The study was limited by lack of detailed information on tumor and patient characteristics, the inability to exclude patients with smoldering MM, and a lack of information on exact cause of death.

“Despite these limitations, this cancer registry represents an important tool to gain insight into the outcome of large numbers of unselected patients—including subgroups of patients who are usually underrepresented due to frailty, advanced age, and/or comorbidities—since all newly diagnosed patients are captured, including those who never received anti-MM treatment,” the investigators noted.

The analysis, which was presented during the 64th ASH Annual Meeting and Exposition, highlighted stringent complete response data for patients 65 years and older and those with high cytogenic risk.

First steps include assembling equity data and reaching out to veterans’ advocacy groups.

Researchers explored the case of a 40-year-old woman with polycythemia vera (PV) who developed a portal vein occlusion 1.5 months postpartum after C-section.