The Debate on Treatment Options in Early-Stage Breast Cancer

Research conducted at The University of Texas MD Anderson Cancer Center and presented at the 2014 Breast Cancer Symposium in San Francisco bolsters the evidence that radiation makes a difference in survival for women who receive treatment for early-stage breast cancer.

The MD Anderson study examined how a patient’s choice of mastectomy versus breast conserving therapy (BCT), in the context of tumor biology, affected the survival benefit. The retrospective study used an outcomes registry, the National Cancer Database, to evaluate the surgical choices of 16,646 women diagnosed from 2004 to 2005 with Stage I disease. The women had either mastectomy, breast conserving surgery (BCS) without radiation, or BCT, consisting of BCS plus 6 weeks of radiation. In the absence of HER2 status, the tumors were classified as estrogen receptor (ER)- or progesterone receptor (PR)-positive or ER- and PR-negative.

Data showed that 11% of women chose BCS, 67% underwent BCT, and 22% had a mastectomy. The outcome: BCT significantly improved the 5-year overall survival (OS) among 96% of women who chose the treatment; 90% of mastectomy patients and 87% of BCS patients showed improved 5-year survival.1

An alternate analysis by the same researchers, using data collected over a longer time period (between 1998 and 2011), examined the criteria that may influence treatment choice among patients. BCT rates were found to have increased across all demographic and clinical characteristics. Of the 727,927 women with early-stage breast cancer from the same National Cancer Database, those who chose BCT were more likely to be:

• Treated at an academic rather than a community medical center

• Living in the Northeast, rather than in the South

• Located closer to the treatment center (within a 17-mile radius).2

According to Isabelle Bedrosian, MD, associate professor, surgical oncology at MD Anderson, and senior author on the study, radiation therapy was primarily responsible for improved survival. Bedrosian stated that oncologists need to be cognizant of these findings when choosing one procedure over the other.1 Such studies would allow evidence-based and informed decision making, and ensure that healthcare decisions for a patient are based on proof and current data.

How does a patient’s choice of treatment affect survival? This was the question that a collaborative retrospective study, published in JAMA Surgery, was designed

to answer.3 The authors evaluated the hazard of death for female patients with early-stage invasive ductal carcinoma (IDC) treated with BCT, mastectomy, or mastectomy with radiation, during a 10-year period between 1998 and 2008.

BCT was used in a majority of the patients (70%), with a smaller share receiving a mastectomy alone (27%), and a few receiving radiation following mastectomy (3%). This study also identified a survival advantage with BCT. The 5-year breast cancer—specific survival rates were 97%, 90%, and 83% for BCT, mastectomy, and mastectomy with radiation, respectively, while the 10-year rates were 94%, 90%, and 83%, respectively.3 Additional follow-up studies are crucial to understanding these observations.

Another study, published in Cancer last year, scrutinized the association between OS, breast cancer—specific survival, and surgery type, in women with stage I and II breast cancer; age at diagnosis and ER status were the influencing variables. Patient data were gathered from the California Cancer Registry on those diagnosed during a 15-year period between January 1, 1990, and December 31, 2004. Of the 112,514 eligible women, 61,771 (55%) had undergone BCT and 50,383 (45%) had undergone mastectomy without radiation. Median follow-up was almost 10 years. The result: even after adjusting for tumor grade, proportion of positive nodes, race, tumor size, age at diagnosis, and year of diagnosis, mastectomy patients had significantly lower OS and breast cancer-specific survival than those who underwent BCT.4

Women 50 years or older with hormone receptor—positive tumors had the strongest association with outcome: they presented 13% lower breast cancer–specific mortality and 19% lower overall mortality with BCT compared with mastectomy. However, the authors acknowledge that the results of their study should not be considered at absolute face value, since they are a product of population-based cancer registries and may be muddled by mortality from patient comorbidities. To address this concern,

the authors used death within 3 years of diagnosis as a surrogate for comorbidities, which could have influenced the choice of surgical treatment among those women.4

Healthcare coverage policies strongly affect treatment choices, but very few studies have been conducted to document this evidence A report published earlier this year in The American Journal of Managed Care evaluated whether the health insurance type, along with socioeconomic and demographic factors, could determine the choice of BCT in treating early-stage breast cancer. The authors were also interested in examining the influence of racial disparities among patients with the same type of health insurance.5

Examining data from the Florida Cancer Data System between 1997 and 2002, among women 40 years or older, the authors found that the patient’s type of health insurance had a significant impact on treatment choice in this cohort. Women insured by Medicare were 10% more likely to receive BCT (odds ratio [OR] = 1.10; 95% CI, 1.02-1.18) than those with private insurance—results that concurred with previous studies. Women enrolled under Medicaid were 20% less likely to receive the treatment (OR = 0.80; 95% CI, 0.64-1.01) compared with privately insured women, although these results were not statistically significant. The authors conducted a stratified analysis among women receiving similar insurance benefits, and identified education, tumor size, and marital status as major determinants of procedure selection. However, none of these factors were as influential as race/ethnicity and poverty among those covered by Medicaid plans. Non-Hispanic black women were more likely to receive BCT compared with non-Hispanic white women, as were women of lower socioeconomic status.5

The authors on this report expect that the Affordable Care Act could greatly influence the trend observed in their research. With 28 states (as of October 20, 2014) and Washington, DC, expanding Medicaid to cover low-income individuals and families (see Map),6 the researchers expect an increase in the number of women choosing BCT, independent of their health insurance coverage.5

Another treatment variable emerged in results of a retrospective study published in the journal Surgery. The study examined whether the institution of care determined the choice of adjuvant radiation treatment (RT), either overall radiation or brachytherapy, among 35,118 women between the ages of 66 and 94 years, covered by Medicare, who underwent BCT.7

A considerable difference in the choice of radiation was documented: patients undergoing treatment at for-profit hospitals were significantly more likely to be treated with brachytherapy (20.2%) than patients at not-for-profit hospitals (15.2%), regardless of age. There was no difference in overall radiation use following surgery in patients 66 to 79 years of age across institutions, while those in the older age group—80 to 94 years old&mdash;were treated more frequently with RT. The authors believe that operative costs and higher reimbursement rates could result in the unnecessary use of more expensive treatments in a patient population that may not even stand to gain much benefit from the therapy.7

Estimates from the year 2011 documented that whole breast radiation cost Medicare $8000, and brachytherapy $16,000.8 The high cost of treatment is shadowed by questions about improved efficacy over standard radiation, and the fact that brachytherapy has its own set of complications, including a higher rate of infections (due to a catheter being inserted into the breast), a higher rate of rib fractures, fat necrosis, and breast pain.8,9

As is becoming increasingly clear in healthcare, a patient benefits from a conversation that includes a detailed analysis of the available evidence as well as a discussion of his or her expectations from the treatment. These sentiments rang loud and clear during a recent panel discussion on “Supporting the shift to patient-centered cancer research and care,” as part of the conference Turning the Tide Against Cancer Through Sustained Medical Innovation, held in Washington, DC, on October 9, 2014. Linda House, RN, BSN, MSM, executive vice president, external affairs, Cancer Support Community, said, “We talk about what we do for patients; but we have a disconnect between what we are doing for versus what we are doing with the patients.” References 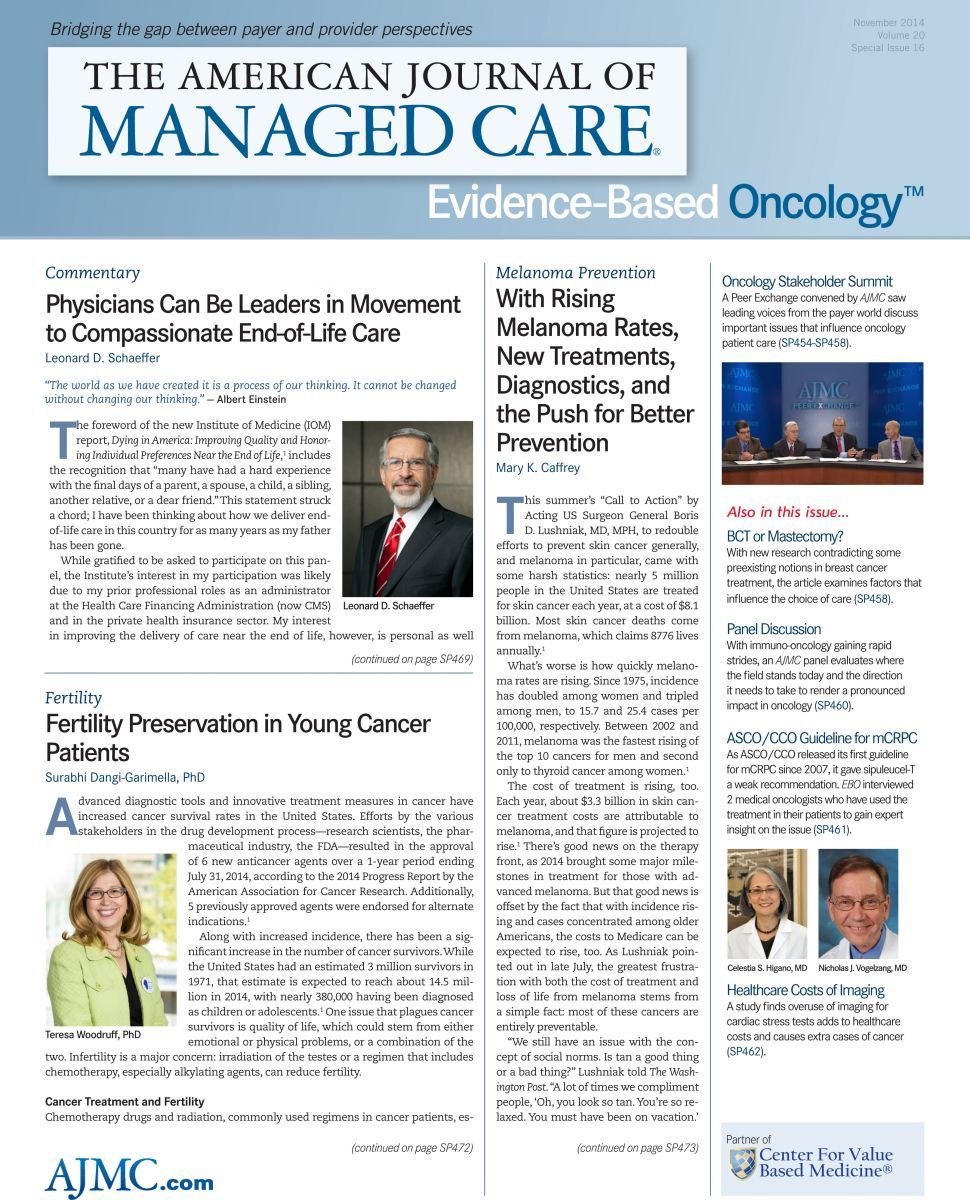