The Drug Price Iceberg: More Than Meets the Eye

When it comes to the political iceberg of drug prices, there is more than meets the eye. Policies that reduce prices but do not lower consumers’ out-of-pocket costs will not address the main challenge facing most Americans.

Am J Manag Care. 2019;25(2):57-58Access to affordable prescription drugs is a topic of increasing public concern. In a recent survey, 82% of respondents identified medical costs as their biggest financial challenge.1 Although prescription spending growth has moderated and drug spending remains a relatively small part of total medical expenditures,2 a 2018 Kaiser Family Foundation poll showed that a significant majority of Americans think that Congress and the president are not doing enough about the problem.3

The fact that a majority of American adults use prescription medications is likely driving the issue of drug affordability as a policy priority. Nearly 3 in 5 American adults take at least 1 prescription drug, which is up markedly since 2000.4 Notably, the percentage of American adults taking 5 or more prescription drugs nearly doubled between 2000 and 2012 from 8% to 15%.4 In addition to factors such as obesity and an aging population that influence pharmaceutical usage, prescribing patterns and access to drugs are affected by several other variables, including revised clinical indications, new medication approvals, and loss of patent protection. Moreover, major policy changes such as the implementation of Medicare Part D and the Affordable Care Act provided millions of Americans with prescription coverage for the first time.

There is clear evidence that pharmaceutical innovation has led to improved patient-centered outcomes for those diagnosed with heart disease, diabetes, depression, HIV, hepatitis C virus, and other conditions. However, serious problems such as the overprescribing of antibiotics and the overuse and abuse of prescription painkillers must be acknowledged.

Before policies exclusively aimed at lowering drug prices are implemented, the clinical and financial effects of drugs should be carefully scrutinized relative to available alternatives. Importantly, the value created by a specific drug—preferably determined for a specific clinical indication&mdash;should be compared not only with other pharmaceuticals, but also with nondrug services. Price is only part of the value equation. Rigorous assessments of clinical services have concluded that certain expensive drugs are of extremely high value, whereas some commonly used diagnostic tests, procedures, and inexpensive drugs are of no value and are even harmful. Moreover, drug prices change over time in a way unlike prices of other services; the price reductions that occur when a drug loses patent protection are not typically observed for nondrug services. For example, acquisition prices for statins and coronary stents, both first available in the mid-1980s, have moved in opposite directions over the past 3 decades.

As stakeholders wrestle with the complex issue of pharmaceutical prices, it is important to consider 2 separate components of drug costs: (1) the price paid by the patient (ie, out-of-pocket costs) and (2) the remaining portion paid by other payers (eg, insurance companies). American Patients First: The Trump Administration Blueprint to Lower Drug Prices and Reduce Out-of-Pocket Costs, published in May 2018, explicitly acknowledged this important distinction.5 The Drug Price Iceberg (Figure) illustrates that the acquisition price is partially paid for by consumers (the part of the iceberg above the water) and a portion by third parties (the part below the surface), such as the government or an employer. Current policy initiatives under consideration mainly address the total price paid for the drug—the entire iceberg. Most of these proposals are politically contentious and, if enacted, would be unlikely to address the public’s desire to lower out-of-pocket costs (reducing the iceberg tip) in the near future.

Appreciating these distinct components of a drug’s acquisition price are essential when considering political implications of proposals aimed to lower drug prices. Although topics such as international drug price comparisons and the percentage of US healthcare dollars expended on drugs are of interest to decision makers, these issues are irrelevant to most prescription medication users. Most Americans don’t care about drug costs; they care what drugs cost them. In other words, the amount of money people pay at the pharmacy counter is what matters.

There is an immediate urgency to provide patients with relief from out-of-pocket costs for their medications. Although health plans pay for an increasing proportion of drug expenditures, the absolute amount paid by patients has grown as well.6 A robust evidence base confirms that medication adherence declines as patients are required to pay more to fill their prescriptions. One in 4 Americans report difficulty affording their prescriptions; cost-related nonadherence occurs more frequently among individuals who are economically disadvantaged and/or diagnosed with multiple chronic conditions.3 This problem is expected to worsen as more Americans are enrolled in a health plan that includes a deductible. These individuals must pay the total cost of their prescriptions until the full amount of the plan deductible is met (ie, patients pay for the entire iceberg). Underinsurance is particularly problematic at the beginning of the calendar year, when plan deductibles reset. A recent study from the Federal Reserve reported that, if faced with an unexpected expense of $400, 4 in 10 adults either would be unable to cover it or would cover it by selling something or borrowing money.7

A perilous (and likely long) journey to reduce total drug acquisition prices is unlikely to enhance consumers’ access to affordable medications in the near future. While these ambitious “melt the entire iceberg” proposals are deliberated, it is important to simultaneously consider initiatives that reduce the patient financial burden (ie, shrink the tip). Programs that reduce patient cost sharing for essential medications (eg, value-based insurance design),8 as well as regulatory changes such as allowing health savings accounts/high-deductible health plans the flexibility to cover medications that treat chronic diseases on a predeductible basis,9 have broad multistakeholder and rare bipartisan political support. These initiatives would be feasible for plans to implement and could quickly lower out-of-pocket drug costs for tens of millions of Americans with chronic conditions.

When it comes to the political iceberg of drug prices, there is more than meets the eye. Policies that reduce prices but do not lower consumers’ out-of-pocket costs will not address the main challenge facing most Americans. Implementation of practical strategies that reduce out-of-pocket costs—shrinking the tip&mdash;are warranted to help struggling Americans afford their essential medications and ultimately improve their health.Author Affiliations: University of Michigan Center for Value-Based Insurance Design (AMF, DG), Ann Arbor, MI.

7. Report on the Economic Well-Being of U.S. Households in 2017. Washington, DC: Board of Governors of the Federal Reserve System; 2018. federalreserve.gov/publications/files/2017-report-economic-well-being-us-households-201805.pdf. Accessed January 14, 2019. 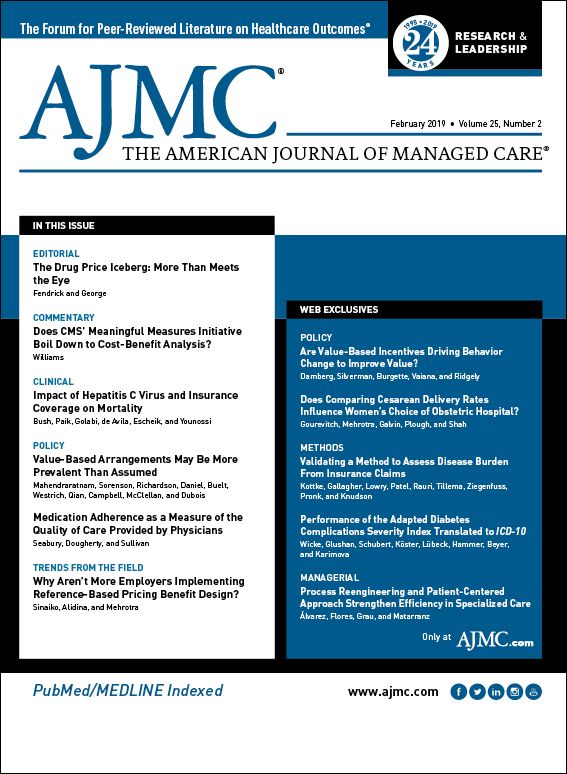