Treatment of Diabetes Mellitus: The Urgent Need for Multifactorial Interventions

The pandemic of type 2 diabetes mellitus requires implementation of multifactorial interventions by clinicians for individual patients and policy makers for the health of the general public.

In most developed countries, diabetes mellitus, predominantly type 2 (T2DM), is emerging as a leading cause of, as well as contributor to, premature mortality and morbidity. At present, there is an emerging pandemic of T2DM that is temporally related to the dramatic global increase in obesity.1 Overall, people with T2DM have about twice the risk for premature death due to microvascular and macrovascular complications. With respect to microvascular complications, in most developed countries, diabetes is the leading cause of blindness due to retinopathy, as well as a major cause of chronic renal failure and the leading cause of end-stage renal failure requiring dialysis. Major macrovascular complications of diabetes include myocardial infarction (MI), stroke, and heart failure, as well as other major morbid conditions such as leg amputations.

Intensive control of glucose has been a cornerstone of reducing microvascular complications. In a meta-analysis of randomized trials, intensive compared with standard glycemic control significantly reduced coronary heart disease (CHD) events, although there was no significant decrease in risk of death. In the management of T2DM, intensive glucose control is necessary, but is not sufficient to achieve the maximum benefits in the reduction of microvascular or macrovascular complications.

It is important to consider that for most patients with diabetes mellitus, several drugs of lifesaving benefit are necessary adjuncts to TLCs. In multivariate analyses of the United Kingdom Prospective Diabetes Study (UKPDS), the chief predictors of premature CVD in T2DM are, in order: higher LDL-C, lower HDL-C, higher BP, and glycemic control.2

In trials of patients with diabetes, hypoglycemia is associated with substantially increased morbidity and mortality. Thus, it is important to select agents with the least intrinsic risk of hypoglycemia, either alone or in combination. Such a strategy would minimize many disease-related complications of diabetes without producing iatrogenic or life-threatening conditions. In one randomized trial of patients with T2DM, over 85% were taking agents from each of the 3 major oral agent classes, including sulfonylureas. In addition, 77% were taking insulin. Based on the totality of evidence, the serious and life-threatening risks of hypoglycemia are definite, but any mortality hazards of lowering A1C below 6.5% to 7.0% are not.3

In patients with T2DM without prior CVD, statins significantly reduce the risk of MI, stroke, and CVD, as well as total deaths. Despite a possible small increase (9%) in the risk of diabetes among those randomly assigned to receive statins, the magnitude of the observed increase, whether real or not, is low in terms of absolute risk, and greatly offset by the larger definitive benefits of statins on CVD and other important events.

Basic research, clinical investigations, and observational epidemiologic studies support the hypothesis that high triglycerides are an independent risk factor for CHD. In a secondary prevention trial of patients with CHD, gemfibrozil increased HDL-C by 6%, but also decreased triglycerides by 31%. Further, gemfibrozil produced a statistically significant and clinically important 22% reduction in the primary prespecified end point of fatal CHD and nonfatal MI. Unfortunately, however, gemfibrozil is associated with almost 40% of the rhabdomyolysis reported by the US Food and Drug Administration. Statins also produce significant decreases in triglyceride levels and smaller increases in HDLC. In addition, high triglycerides are a better predictor of the future development of diabetes than is fasting blood sugar, and they are associated with worsening progression. Thus, for these and other cogent reasons, standard clinical practice should include the use of evidence-based doses of high-potency statins in the treatment of all patients with diabetes.4

In addition, strict control of BP, especially with angiotensin converting enzyme (ACE) inhibitors or angiotensin receptor blockers (ARBs), reduces premature morbidity and mortality from CVD and nephropathy. Thus, in patients with diabetes mellitus, a multifactorial risk reduction approach, which includes TLCs and adjunctive pharmacologic therapies of proven benefit, is optimal. In this context, control of blood glucose is necessary but not sufficient to reduce overall premature mortality and morbidity. It is increasingly the case that insulin is a useful therapy for even T2DM, but there are numerous potential risks including hypoglycemia with associated risk for brain cell death and possible dementia.

According to data from a random sample of the US population aged 20 years or older, 20% have metabolic syndrome, a constellation of obesity, hypertension, dyslipidemia, and insulin resistance that is a precursor of diabetes. In those 50 years or older, 40% have metabolic syndrome, and their 10-year risk for a first coronary event is 16% to 18%, which is approximately as high as that of a patient receiving secondary prevention. The successful adoption of the TLCs of weight loss and increased physical activity would preclude the need for pharmacologic therapies for the majority. Unfortunately, in the United States, many patients prefer the prescription of pills to the prescription of more harmful lifestyles. Thus, although TLCs should be strongly recommended and encour, clinicians should not let the perfect be the enemy of the possible.

Evidence-based doses of statins, aspirin, ACE inhibitors, or ARBs should be prescribed as adjuncts, not alternatives, to TLCs. At present, most of the remarkable decline in mortality from CVD in the United States during the past several decades is due to treatment, not prevention; and the rate of decline is leveling off. In addition, US adolescents are already heavier, less physically active, smoke more, and develop T2DM at a higher rate than their parents’ generation did in their adolescence. Thus, they may become the first US generation since 1950 to have higher rates of CVD than did their parents.

Of far greater concern with regard to clinical and public health are the alarming findings on the undertreatment of T2DM that have recently become available from numerous countries, including Thailand, Mexico, and the United States. For example, in Thailand, up to 62% of men who were surveyed—or more than 663,000&mdash;are either undiagnosed with or untreated for diabetes. In Mexico, 99% of adult patients with diabetes are not meeting their targets. In the United States, high-risk groups like the mentally ill continue to be under-screened and under-treated, to an even greater extent than their non—mentally ill counterparts; and nearly 90% of adults with diabetes&mdash;or more than 16 million adults 35 years and older&mdash;fail to meet widely accepted targets for healthy levels of blood glucose, BP, or cholesterol. Further, people with diabetes in the United States are twice as likely to be diagnosed and treated if they have health insurance. Finally, it is estimated that if present trends of obesity and physical inactivity continue, perhaps one-third of US adults will have diabetes by 2050.5

The totality of evidence indicates the clear need for clinicians to aggressively utilize a multifactorial approach to risk reduction. Specifically, the high rates of premature morbidity and mortality from T2DM should influence clinicians to adopt all approaches of proven benefit in screening and management of all patients to reduce the many appreciable and avoidable risks of premature mortality and morbidity among patients with diabetes. With respect to the health of the general public, the Affordable Care Act generally follows the guidelines of the US Preventive Services Task Force, which includes evidence-based screening for diabetes, hypertension, cholesterol, and coverage of aspirin without patient cost sharing.6 Best practices should include screening for cholesterol at annual intervals in untreated persons and at quarterly intervals for patients under treatment, especially those not at goal. The same approach should be used for BP screening, which includes annual screening in normotensive patients and quarterly or more frequent screening for those under treatment.7 The implementation of these multifactorial interventions by clinicians for their individual patients, and by policy makers for the health of the general public, can markedly reduce the premature morbidity and mortality associated with diabetes mellitus.Author Affiliations: Charles E. Schmidt College of Medicine, Florida Atlantic University, Boca Raton, FL (CHH, JWN); Dzau Professor of Medicine, Harvard Medical School, Boston, MA (MAP); University of Miami Miller School of Medicine, Hollywood, FL (PSJ); Baylor College of Medicine, Houston, TX (AG).

Source of Funding: None reported. 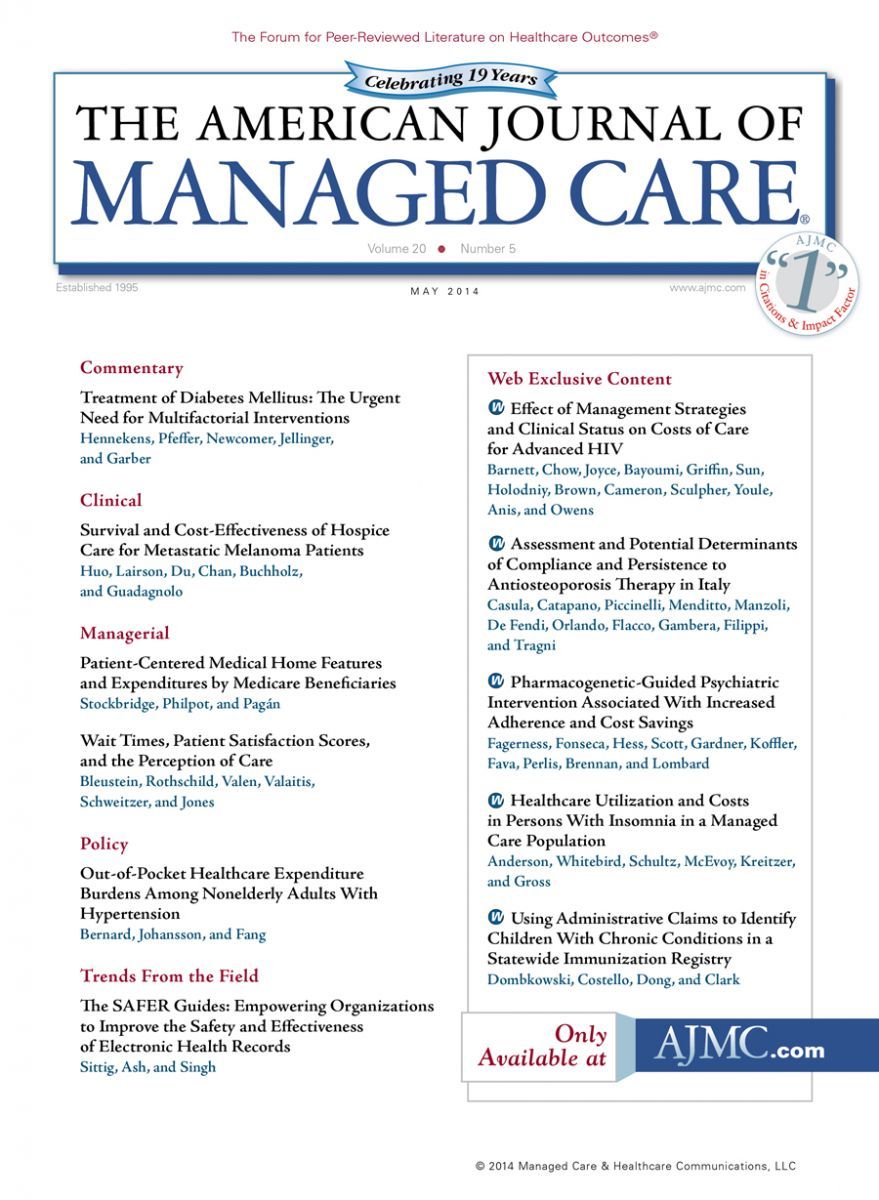