ABSTRACTObjectives: Reports suggest a trend for physician practices to change ownership from physicians to hospitals. It remains unclear how this change affects quality of patient care. We report the effect of a change to hospital ownership on the use of care management processes (CMPs) and health information technology (IT) among practices in the United States.

Methods: We included 2 cohorts of practices: large practices with 20 or more physicians and small/medium practices with fewer than 20 physicians. The main outcomes were the changes in CMP and health IT indices among practices that were acquired by hospitals. We used multivariate logistic regression to assess these changes.

Results: Large practices acquired by hospitals had larger increases in their CMP index than those that remained physician-owned (11.0-point increase vs 7.0-point decrease; adjusted P = .03). Small/medium practices acquired by hospitals had smaller but significantly higher increases in their CMP score (3.8 points vs 2.6 points; adjusted P = .04). Among all practices, there were no significant differences in the change of the health IT index.

Conclusions: We found a significant increase in the use of CMPs among practices that were acquired by hospitals and no difference in health IT use. These findings suggest that a trend for hospitals to own physician practices may have a positive effect on chronic disease management and quality of care.

Reports suggest a trend for physician practices to change ownership from physicians to hospitals. We analyzed data from the 3 largest surveys of US medical groups and found:

A number of reports suggest an emerging trend for physician practices to change ownership from physicians to hospitals.1-8 For example, reports from the Medical Group Management Association’s (MGMA) Physician Compensation and Production Survey found that the percentage of physicians who were employed by hospitals increased from 20% in 2002 to over 50% in 2008.1,9,10 Further, the Center for Studying Health System Change found that in 2010, hospitals were rapidly increasing employment of physicians in 9 of 12 markets.11 An American Hospital Association survey also found that over 200,000 physicians were employed by hospitals in 2010—an increase of 34% since 2000.7

Published reports suggest that the movement toward hospital employment results from multiple factors.1,2,7,12 In particular, policies being adopted by federal and state payers (ie, Medicare and Medicaid) and by health insurance plans, such as the movement toward bundled and capitated payments, encouragement of patient-centered medical homes and accountable care organizations, and incentives for the adoption of electronic health records (EHRs), such as the Health Information Technology for Economic and Clinical Health (HITECH) Act and CMS’s “Meaningful Use” incentive, are thought to be large drivers of a shift to hospital-ownership.

It is unclear how a change to hospital ownership affects the quality of patient care. Given that hospitals generally have greater resources than physician practices, increased hospital ownership of practices may improve quality of care. There is evidence that hospital-owned practices use more recommended care management processes (CMPs) (eg, disease registries, nurse coordinators, health information technology [IT]) and may have the mechanisms to improve care coordination.13-15 On the other hand, there may be negative effects on quality, such as less autonomy for physicians and staff or less personalized care. Hospital ownership may also be associated with increased market share by hospitals, and increased costs.16,17

In this paper, we report findings from a series of 3 national surveys of physician groups conducted between 2006 and 2013, from which, we estimate changes in the use of systematic care management processes and health IT to improve the quality of care after practices were acquired by hospitals.

We used data from the 3 largest national surveys of physician practices in the United States: the National Survey of Physician Organizations 2 and 3 (NSPO2 and NSPO3) and the National Survey of Small and Medium Physician Practices (NSSMPP).18-20 The sample, methods, and content have been described previously and are outlined in (eAppendices available at www.ajmc.com).18-21

Briefly, all 3 were 40-minute telephone surveys with the medical director, president, or chief executive officer of the physician organization, and focused on the use of evidence-based CMPs and health IT, particularly for patients with asthma, diabetes, congestive heart failure, and/or depression. All 3 surveys collected information on the structural characteristics of the group (eg, number of physicians, ownership, specialty mix) and the external incentives that were in place to improve quality (eg, payment for achieving quality measures, public reporting), in addition to the CMPs and use of health IT noted above.

Given the complex sampling structures of NSPO3 and NSSMPP, population ratio-adjusted weights were derived based on sampling probabilities with poststratification adjustments.23

The current findings suggest that hospital acquisition of practices may have beneficial effects for patients with chronic illnesses. We found significant increases in the use of recommended evidence-based CMPs among practices that changed to hospital ownership compared with practices that remained physician-owned. This was true for practices of all sizes, and may be the result of more financial resources or shared resources that become available to practices as they are acquired by hospitals.

Like CMPs, one could argue that the financial resources of a hospital enable practices to cover the capital expense of installing an EHR system. Our findings do not support this hypothesis, however, as we found no difference in the use of health IT or change in the use of health IT in practices that were acquired by hospitals versus those that remained physician-owned. This may be due to policies such as the HITECH Act, enacted under the American Recovery and Reinvestment Act of 2009, which provided incentives for the meaningful use of health IT (and EHRs in particular).24

However, there may be off-setting negative effects if practices acquired by hospitals enable them to raise prices through increased negotiating leverage with payers. A recent study found that markets where hospitals report an increase in ownership of practices were associated with higher healthcare spending.14 Hospital acquisition of practices may also have unintended effects on physician autonomy or rapport with patients—although, to date there are no data to support this possibility.

There are 2 main limitations to the present analysis. First, the response rate ranged from almost 50% to more than 63% across the 3 surveys. Although this is a robust response rate—particularly for physician groups&mdash;there may be unobservable differences between respondents and nonrespondents. Second, the data are based on the responses of a single informant in each group. We sought the person who was the most knowledgeable respondent for the questions asked; however, it was beyond the scope of our research to validate the responses. Nevertheless, a number of internal checks of the responses suggested consistent validity.

These surveys of physician groups showed minimal increase in the percentage of practices that were owned by hospitals. However, there appears to be increased use of processes for the management of chronic disease among practices that did change ownership. As the healthcare environment continues to change and evolve due to changes in public and private policies, it will be important to continue to monitor both the prevalence and the effects of hospital ownership of practices on patients and physicians. This is particularly important, given the current findings that those practices that became hospital-owned experienced a significant increase in their use of recommended evidence-based CMPs for patients with asthma, congestive heart failure, depression, and diabetes. Future research should examine the relationship between practice ownership and clinical and patient-reported outcomes of care.

Source of Funding: This project was funded by the Robert Wood Johnson Foundation (Grant No. 68847). Dr Bishop is supported by a National Institute On Aging Career Development Award (K23AG043499) and as a Nanette Laitman Clinical Scholar in Public Health at Weill Cornell Medical College.

Author Disclosures: Dr Casalino is an unpaid board member for the American Medical Group Association Foundation and the Healthcare Research and Education Trust. The remaining authors report no relationship or financial interest with any entity that would pose a conflict of interest with the subject matter of this article.

Download PDF: Trends in Hospital Ownership of Physician Practices and the Effect on Processes to Improve Quality 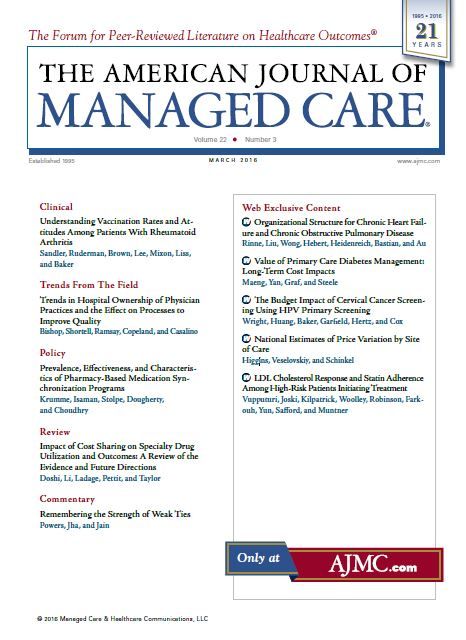