The title of the talk by Celestia S. Higano, MD, “New Developments in the Treatment of Hormone Refractory Prostate Cancer,” was notable in the use of a term that has been replaced over the past decade with “castration resistant.” It was a change that Higano, of the Fred Hutchison Cancer Research Center in Seattle, Washington, admits she did not support at the time.

But she acknowledged March 15, 2014, in presenting therapy options for these harder-to-treat patients, that “refractory” really no longer applies, and that made for a challenging and interesting session at the National Comprehensive Cancer Network’s (NCCN’s) 19th Annual Conference: Advancing the Standard of Cancer Care, held in Hollywood, Florida.

Higano presented a chart showing standard-of-care options for metastatic castration-resistant prostate cancer (mCRPC), which featured 9 different therapies across columns for patients at various points, from those with symptoms to those without, and for those who have already received docetaxel. Of the 6 therapies with level 1 evidence for survival benefits, only docetaxel itself had been approved “in the last 4 years,” she noted. (The others are sipuleucel-T, abiraterone, enzalutamide, radium 223, and cabazitaxel.)

With so many new therapies available, Higano said the question becomes, “How do I decide what treatment is best in a given situation?” It comes down to what the patient presents: Are there symptoms? If so, what are they? How fast is the disease progressing? Is there any presence of lung, liver, nodal, or soft tissue disease?

Higano sought to break up the usual “pathway” chart oncologists often see and get down to basics: there are therapies for mCRPC patients without symptoms (immunotherapy and hormonal therapy, perhaps docetaxel), for those with symptoms (radium 223 is an option), and for those who have had docetaxel (cabazitaxel was listed as the first option).

More so than some of the NCCN presenters, she put forth highly challenging cases and treatment choices, and then reviewed the scattered responses with some strong feedback. A key moment occurred regarding the immunotherapy sipuleucel-T, at which time Higano sought to take on concerns about cost. “I would argue there are plenty of other therapies that are just as expensive,” she said.

Higano suggested that immunotherapy involves a different process and thus requires a different way of thinking about costs and benefits, especially since the effects do not take hold immediately. To her, the evidence is clear: In the 2010 study published in the New England Journal of Medicine, at 3 years, the median survival benefit was 4.1 months and, more importantly, there was 22% relative reduction in the risk of death over the 3-year period.1 (Higano was a coauthor of the study.) “Subsequent trials have confirmed the data, and with milder toxicities and a

shorter period to the first use of pain medication, there are clear benefits,” she said.

When should immunotherapy be used? Higano recommended early in course of mCRPC, before second-line hormonal treatments, corticosteroid use with chemotherapy, and abiraterone. At

this stage, patients are less likely to have symptoms or rapid progression or to experience liver metastases.

If immunotherapy is used, Higano recommends baseline imaging to assess pain and monthly follow-up to monitor the patient. Patient education about the differences in how the treatment works

is important, she said.

Two hormonal therapies, abiraterone and enzalutamide, are also indicated for mCRPC in patients without symptoms. While abiraterone appears to show less time to chemotherapy than enzalutamide from the placebo arm of the phase 3 study (8.4 vs 17 months), Higano said it is very important to note that the abiraterone trial included prednisone in the placebo arm, while the enzalutamide trial did not. “Prednisone, even by itself, is an active agent. That could have increased the difference between 2 two arms,” she said.

In discussing radium 223, Higano emphasized it is indicated only when patients have shown symptoms. It is a calcium mimic and targets bone metastases; thus, she predicts that skeletal related events will become an end point in upcoming studies. While it can only be handled and administered by a specialist in nuclear medicine, there are no restrictions on the patient coming into contact with others. It should not be combined with docetaxel. “That is too toxic,” she said.

In discussing cabazitaxel, Higano offered what she labeled “practical” advice: reduce the initial dose to 20 mg/m2, use growth factor in all high-risk patients, and understand that a lack of pain progression does not mean a lack of clinical benefit.

The choices are challenging, to be sure, but Higano said that new sequencing and combination data will give oncologists better information to use when making decisions about treatment in the

At the 19th Annual Conference of the National Comprehensive Cancer Network (NCCN), held March 12-15, 2014, experts reviewed research and presented updates to the NCCN Clinical Practice Guidelines in Oncology. The conference also featured a roundtable discussion on how the early months of implementing the Affordable Care Act are affecting the delivery of cancer care. Beyond treatment for cancer, NCCN issued updates to last year’s survivorship guidelines as well as new recommendations in the realm of cancer screening.

For complete NCCN guidelines, create a profile and visit: http://www.nccn.org/professionals/default.aspx. 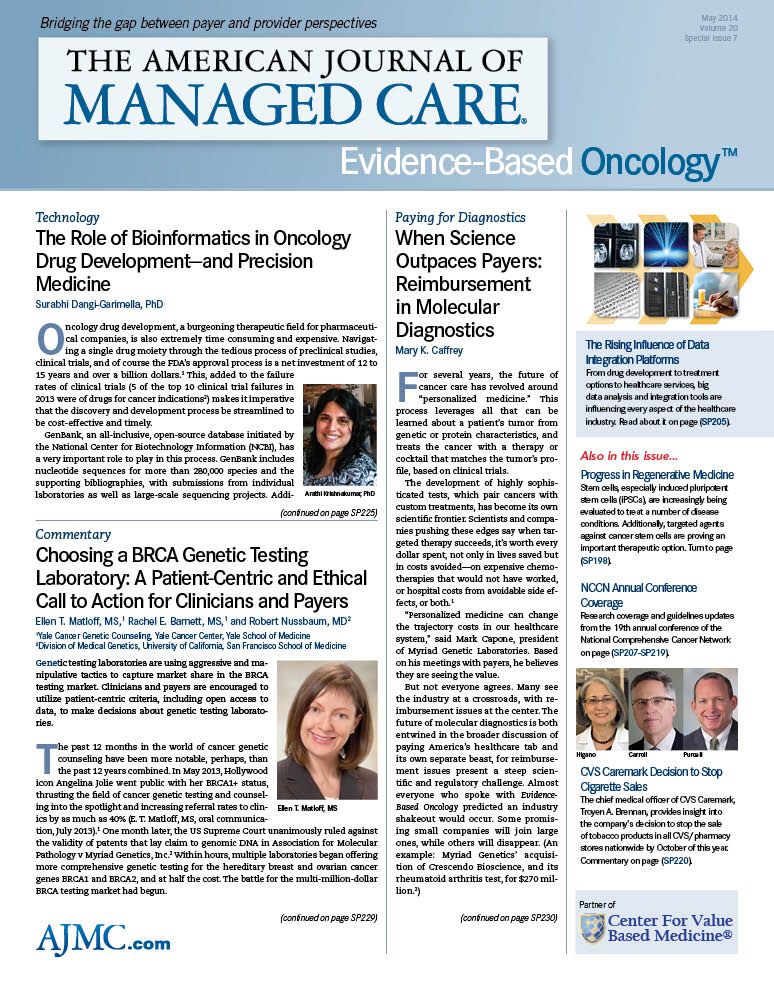