Panelists at the Community Oncology Alliance Payer Exchange Summit take issue with strategies they say harm patients and don't save money in the long run.

White-bagging. Brown-bagging. Step therapy. Home infusion. Each term in the roster of payer cost-saving strategies means something different, but for the panelists taking part in Wednesday’s session at the Community Oncology Alliance Payer Exchange Summit, the bottom line was the same:

Taking control away from oncologists can lead to waste, can cost patients time and money, and can be downright dangerous.

With Diaz, the current president of COA, and McAneny, a recent president of the American Medical Association, on the panel, no one held back with their thoughts how cost-saving efforts, however well-intentioned, can backfire and do harm.

“You just need to get medicine to the patient in time to be able to start treatment sometimes in a very timely fashion. Not all cancers are slow growing, and some are fast growing, and every day that you wait sometimes makes a huge difference in patients or patient outcomes,” Diaz said. “So, I just look at it as it's going to interfere with the quality and the value of patients care overall.”

Okon and the panel reviewed the various strategies:

Okon asked McAneny to address problems with white-bagging, especially when the oncologist needs to adjust a patient’s regimen. “The issue with white bagging is that if the insurance company has sent me that drug and that dose, if I need to change that patient's dose for any reason, or even change to another regimen altogether, because the patient has progressed or isn't tolerating the first regimen, then I have to send that patient away, and bear the cost of sending that drug back to whoever sent it to me. And then the patient would have to wait until the new drug is approved and come in, and then make another trip," she said.

McAneny, who has patients who may travel 100 miles to see her, said this costly to patients and caregivers. “I think one of the things that needs to be considered—that's almost never considered when insurers are making these changes—is the effect on the patient's out-of-pocket expense. … If that patient has to go away, and come back another day, they have to take the daughter out of work again, maybe take the kid out of school, again, make other arrangements to get transportation, it really is going to increase the inequities that we see for poor people vs wealthier people.”

When oncologists cannot manage the drugs themselves, they don’t know who has mixed it, or whether it’s been kept at the right temperature during shipment, she said. “I think this is an insurance company sacrificing patient safety, for expedience, and the hope that this will somehow save them money.”

If the drug arrives and doesn’t look right, McAneny said she will not use it. Brown-bagging is even worse, she said, because patients can leave drugs in their car where they are exposed to heat.

Hamilton said that physicians in her practice have worked to reach patients by traveling out to rural areas of Illinois once a week. “So, if that drug is not there, or that dosage changes, and we’re not back in that clinic for another week, we stand to delay that treatment,” she said, adding that she’s succeeded in changing one payer contract to allow the clinic’s physicians to buy-and-bill to avoid this circumstance. But that’s just one contract.

Diaz said the situation threatens the trust that doctors work to establish with patients. “They want to get their value, but they’re also concerned about their safety,” he said.

One patient told the mail order pharmacy to stop sending his oral medication with a cold pack, and the Florida clinic started seeing detectable levels of cancer in his bloodwork. The clinic was unaware of the patient’s instructions to stop shipping with the cold pack. Patients assume the insurer always does things that are in their interest, but that’s not always the case, Diaz said.

McAneny said the mail-order system leads to waste, because patients often continue to receive drugs after their regimen or dose has changed. At her New Mexico clinic, McAneny instructs patients to bring unused therapies to her office—and once she took the wasted treatments to a meeting with a payer.

“I took that box with me and I dumped it out on the desk and said, ‘Here's $300,000 worth of drugs that you paid for, that our patients could not take.’ And they decided that maybe they would let us buy-and-bill and supply those medications,” McAneny said.

Okon and Diaz then discussed problems with step therapy. “I never want to say step therapy without saying, ‘fail first.’ Because that’s what step therapy is.” He said the use of step therapy has expanded beyond its original intent, with pharmacy benefit managers dictating which drug must be used, and Diaz calling it, “practicing medicine without a license.”

Step therapy is especially problematic when patients are denied supportive treatments to control pain or nausea, or forced to take more toxic therapies their physicians know will make them sick. “We have a hard time managing pain anyway,” Hamilton said. “And a delay to get adequate pain control because you're limited to the amount of which drug that you can start with has been an issue.”

Payers have put mandates on sleeping medications, anticoagulants, or required iron formulations that require 10 trips to the clinic instead of 2, the panelists said. This doesn’t take the inconvenience of the patient into account, they said. Diaz said some payers literally require patients to violently throw up before they will cover medication to prevent nausea. If patients who are likely to become ill don’t get this treatment up front, there’s a good chance they might not get any more chemotherapy.

Besides being costly to practices, McAneny said putting physicians through these hoops contributes to physician burnout. “One of the things that we have seen across the country is that physicians would like to spend time with patients we know that for every hour they spend with patients, they get to spend two hours with a computer. And now they probably get to spend another half an hour talking to someone who knows nothing sometimes about oncology and is just reciting the payer’s policy from their manual at you,” she said.

Home infusion was controversial before COVID-19, but it has gained attention because some payers have promoted it as a way to keep patients from traveling to infusion centers. McAneny believes this is shortsighted. A person’s bedroom or bathroom is likely not as sterile as an infusion center, and there’s no way of knowing if a nurse is entering a house where someone has been exposed to the virus.

A viewer asked whether payers, including Medicare, are listening to physician concerns. Hamilton answered first. “I don’t think that they're listening to us. I think we'll probably see more and more step therapy, and [similar] things being put into place. You know, I look at things on the physician side, we're seeing it on both the pharmacy and [on] the physician, which are, which are two different contracts and two different people to deal with.” 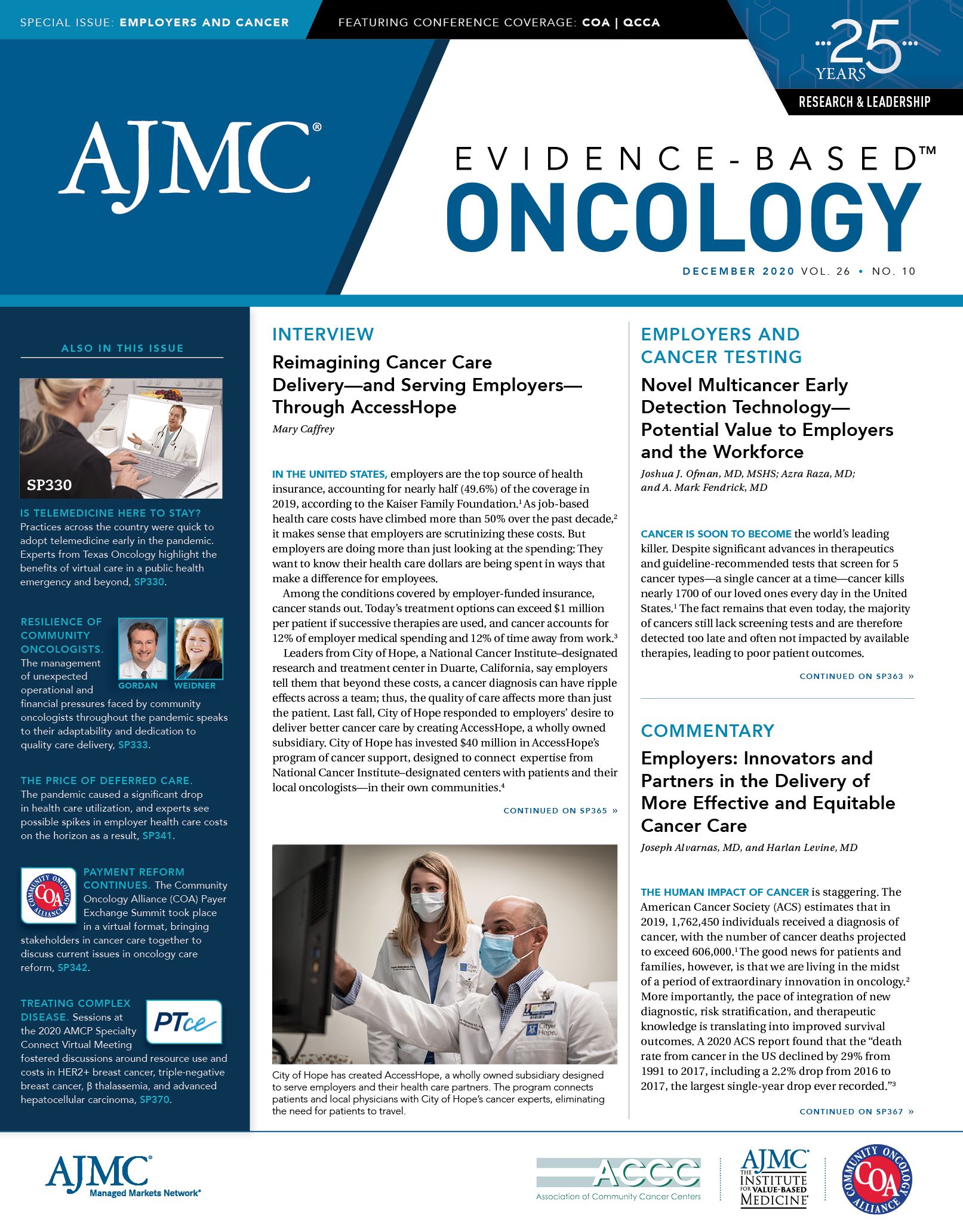 Results presented during the 64th American Society of Hematology Annual Meeting and Exposition could offer an effective option for those with relapsed or refractory DLBCL, even as chimeric antigen receptor T-cell therapy becomes standard of care for many patients.

Evidence-Based Oncology™️ spoke with Lyons about the creation of this real-world data set and the pros and cons of different treatments for MDS.