When the Topic Is Dying: A Conversation With Kashyap Patel, MD

Kashyap Patel, MD, had known for years that he would write about dying.

The longtime oncologist, now CEO of Carolina Blood and Cancer Care Associates of Rock Hill, South Carolina, had addressed the topic head on with patients, family members, and caregivers. He took a special course in palliative care at Northwestern University so that he could train others. Patel knew
there was a great, unmet need to teach medical students and young physicians how to guide patients through the end-of-life process in a meaningful way.

And yet, despite a decade of movement toward greater quality in cancer care, dying remained a mostly taboo subject.

As Patel describes it, his own brush with mortality—a cardiac event in 2008—convinced him that the time had come to finish a book he had long contemplated. Patel turned to his extensive
notes and his diary, and he began compiling the stories that became Between Life and Death: From Despair to Hope (Penguin Random House India). Drawn directly from patient stories—in particular, the tale of a former British pilot named Harry Falls—the book is a roadmap for the journey every human being takes, and how we can all do so with greater purpose, and less fear. (A review
appeared in the April issue of Evidence-Based Oncology™).1

The journey to publication took some unexpected turns. In the winter of 2020, Patel expected his book would reach readers sometime in April. But first the coronavirus disease 2019 (COVID-
19) hit China, disrupting the book’s initial printing, and then Patel’s publisher feared the original title would fall flat during a pandemic. After finally arriving on August 1, Between Life and
Death has received an enthusiastic reception.

Patel spoke with EBO about a topic he now hopes to make a theme of his coming tenure as president of the Community Oncology Alliance. This interview has been edited and condensed for clarity.

EBO: How and when did you decide, ‘I need to write a book on this subject?’

PATEL: As an oncologist, having lived on 3 continents and having practiced for 3 decades, what I found was that every time I had to break bad news to a patient, we had to shift gears to comfort care.

The common questions were, why? How? What will happen to my loved ones? Then, as I started getting involved in the health care policy space, I realized that one of the biggest challenges that we have as oncologists is that our patients are not getting prepared for end-of-life care.

After becoming a trainer and conducting retreats for other doctors, I realized that there’s not a single medical school in America that has [a] dedicated course on communications for the
end-of-life care.

EBO: Tell us about the patient who appears in the book as Harry Falls.

PATEL: This patient came to see me, and he was a straight talker. He was a British pilot who fought in the Second World War. And he said, “Doctor, I’m not afraid of my death, but I want to see how
it will happen—I want to be prepared for it, I want to prepare my family.” This patient had terminal lung cancer and said, “I don’t want to take chemotherapy.” From then on, I told him, “Your life expectancy is going to be less than 3 months.” He said, “All I want to know is, what will happen to me? What will happen to my body? How do diff erent faiths deal with death and dying? How will my wife and my children deal with that? Will I have enough time to [bring] closure to everything? Will I be in pain?”

I started narrating stories from a few of my patients, so that I could be mentally ready for the whole process of understanding the transition between this life and wherever we’re heading for after life.

EBO: How are audiences responding to the book?

PATEL: Among all those who’ve read it so far, I’ve received about 15 different written reviews. It’s incredible.…They are incredibly moved and touched by it; there are very moving accounts, saying,
“I wish I’d read this book before my father passed away. I wish I had this book before my mom was on her death bed.”

PATEL: My physician friends are all excited, because this is something that I think people are hesitant to bring up—but when they see that there’s a way that you can openly communicate
about it—dealing with the finitude of life, this conversation could start happening more. A lot
of my colleagues are encouraging me to look into even starting a movement. And I’m seriously
looking at taking this on….I want to bring openness to the conversation; how do we bring this
topic up while we talk about extending life as well?

One other person who read it is actually a current patient; he also gave testimony about [the] interaction with this book. So patients who have active cancer are seeing this book as one of the roadmaps to finding peace in your own life as well.

EBO: It sounds like the book is a good way for physicians to start the conversation with patients, to open the door for those who are struggling with beginning a conversation about the end of life.

PATEL: Absolutely. And one of the senior leaders of a large pharma company saw that and said, “We want to have all of our leadership see this, because when we talk about [these] issues across the country, we don’t talk about the poor quality of death.” If you look into the Institute of Medicine, they always say that the quality of death is not the best in the United States (Dying in America, 20152).

If you look into the published studies [in Dying in America], there was a phase 3 randomized study
where they looked into the type and place of death of the cancer patients, those patients who died
in the hospital, in the ICU [intensive care unit] or active acute care setting—their loved ones had much worse psychiatric issues, because of not being able to put it closer to what [the patients] wanted to do. So there are studies that show that dying in a place where patients would not have desired is fraught with adverse outcomes for the family as well as caregivers.…But when you bring up the conversation, how do you bring up conversation?

EBO: What do you hope is the chief message that people take away from your book?

PATEL: I want everyone to know that you have a choice of living this life to the fullest no matter what comes. What I don’t control is what way my finitude will reach me—whether I’ll be dying of cancer, heart disease, Alzheimer [disease], or kidney failure. What I can choose is, how do I react to that? What I cannot control is, what comes my way. The only thing that’s certain in my life is that I’m going to leave this world. From the day I am born, I’m counting one less day toward that horizon of finitude, and why can’t I be ready for that instead of worrying about it? If I take the fear of death away, I can enjoy life to the fullest. 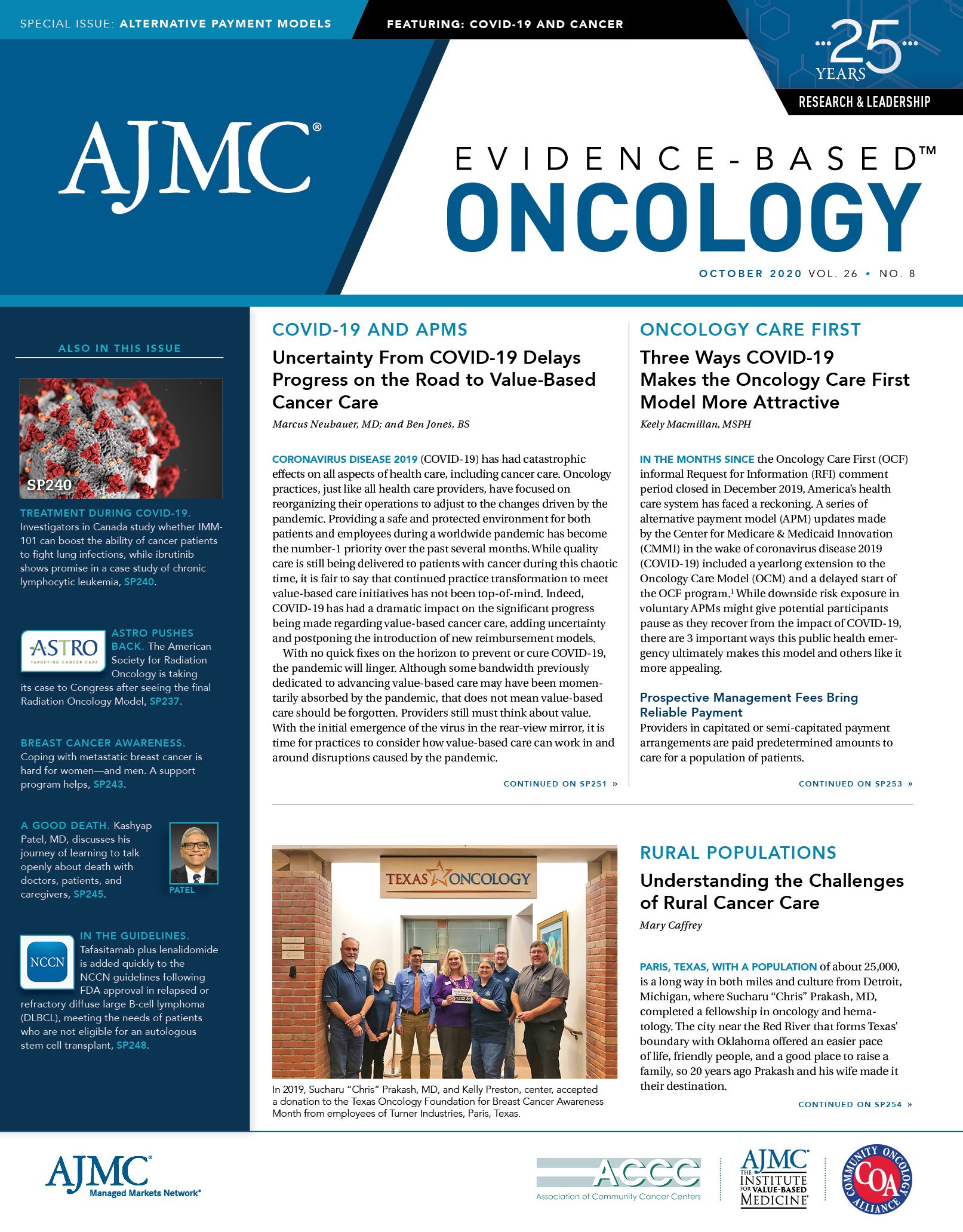 Drug That Boosts Immunotherapy Studied as Tool to Battle COVID-19 in Patients With Cancer
Too Much, Too Fast: Providers Push Back on CMS’ Final RO Model
Connecting the Dots
Uncertainty From COVID-19 Delays Progress on the Road to Value-Based Cancer Care
Three Ways COVID-19 Makes the Oncology Care First Model More Attractive
Understanding the Challenges of Rural Cancer Care
When the Topic Is Dying: A Conversation With Kashyap Patel, MD
Being Each Other’s Hero: Facing MBC Together
Related Videos
Related Content