Objectives: The goals of this study were to describe Medicare Part B utilization and payment among family practice providers in 2012 and to examine patterns in the delivery of care and reimbursement rates to providers.

Methods: Descriptive statistics were compiled for averages, means, and standard deviations of medical procedures, charges, and reimbursements across regions. One-way ANOVA were computed and P values <.05 were considered significant.

Results: The study included a total of 77,462 family practice providers with 969,353 procedures performed. There was a significant difference in Medicare Part B average allowed amounts, submitted charges, and payments across regions. Large regional differences in types of procedures performed were also noted.

Conclusions: This study represented one of the first opportunities to explore Medicare Part B provider utilization and payment data for family practice physicians. Lower reimbursement was related to a higher number of medical procedures performed. This research suggests that regional variation in medical procedures performed should be analyzed through an accountable care lens and may assist future research concerning disparities in family practice care access and billing.

People visit family practice providers for a variety of health problems; this is the largest medical specialty and is often the first visit patients make for nonemergency care.1,2 In the United States, healthcare reforms seek to decrease healthcare costs, yet with an increase in elderly population, overall medical expenditures are expected to rise.3-6 A funding source for this increase will be Medicare Part B, a national social insurance program administered by the US government to cover medically necessary expenses, available to those 65 years or older and to those with certain disabilities.7 Family practice providers are expected to increasingly service the medical needs of the aging population with the potential to impact total medical expenditures. In calculations of the 2025 family practice physician workforce, 20% of the projected 52,000-doctor increase in this medical specialty will be needed to service the aging population.8

Past studies on Medicare Part B have found regional differences in services and payments, but have mainly focused on rural and urban differences. Some found that for both outpatient procedures and inpatient visits, family practice physicians had higher service rates in rural areas compared with other specialties.9,10 These same 2 studies suggest that family physicians in rural areas were more likely to perform dermatologic procedures, whereas family physicians in urban areas were more likely to perform minor ophthalmologic tests and simple urinary tract procedures.9 Similar studies showed that patients in rural areas rely on generalists, such as family physicians, for easier geographic access, and that these patients also have fewer visits overall.10-12

In terms of reimbursements, researchers have found that in Wisconsin, counties with a greater supply of family physicians had relatively lower amounts of Medicare Part B reimbursements.3 A study using the Area Resource File, which provides Medicare Part B data, showed that New York had the lowest supply of family physicians compared with South Dakota, which had the highest.13 It also suggested that with a greater supply of family practice physicians, healthcare costs were lower.13-15 Yet, not all family practice doctors are willing to accept Medicare insurance. Based on the 2001 Medicare Current Beneï¬ciaries Study, it was found that the type of provider was a factor that contributed to Medicare patients without supplemental insurance being denied care.5 Additionally, the location of where a service was requested, whether urban or rural, makes a difference; some studies show that family physicians in more populated areas more readily accept new Medicare patients.5,16 However, a recent study found that rural family physicians were more likely to accept new Medicare patients (84%) compared with urban family physicians (70%).17,18 It is critical to understand the role of family practice in the provision of basic medical procedures from the perspectives of both access to care and accountability of care.

This study looked at the provision of services through family practice providers who are reimbursed by Medicare Part B. Overall funding to providers by CMS is based on a variety of factors, including the Sustainable Growth Rate (SGR), which is a formulaic method used by the CMS to determine payments in regards to providers. If providers are over- or undercharging, the conversion factor may either decrease or increase payments to providers, based on whether charged expenses meet the target SGR or not.19 By analyzing different regions and seeing the variations of provider charges, there is an opportunity to take a glimpse into Medicare’s reimbursement mechanisms to possibly improve policies for the future. Although there are many studies investigating Medicare Part B in family practice settings, most are outdated, focus primarily on rural and urban regions, and lack Medicare Part B provider utilization and payment information. The purpose of this study was to provide an updated examination of the Medicare Part B provider utilization and payment in family practice settings with attention to regional differences that exist in the United States, and to examine the policy implications of regional differences in service delivery and reimbursement patterns.

In April 2014, for the first time, CMS released a provider-identifiable public data set containing Medicare Part B information on utilization and payments made to providers. The data set can be found on the CMS website in 2 different formats, and is the data source for this study.20 These data originated from CMS’s 2012 National Claims History Standard Analytic Files and covered the final action claims for calendar year 2012 for Medicare Part B beneficiaries enrolling in the fee-for-service program. Beneficiary counts, service counts, provider-submitted charges, Medicare-allowed amounts and payments, provider type, place of service, Medicare participation indicator, Health Common Procedure Coding System, and provider demographics (eg, name, gender, credential, address, National Provider Identifier) were the variables contained in the data. To protect the privacy of the beneficiaries, records, which were derived from 10 or fewer beneficiaries, were not available in the data set.20 In order to examine providers’ region of clinical practice, we utilized the HHS region map to categorize the United States into 10 different regions: 1 (Northeast), 2 (North Atlantic), 3 (Mid-Atlantic), 4 (Southern), 5 (Great Lakes), 6 (Southwest), 7 (Midwest), 8 (Mountain West), 9 (West), and 10 (Northwest) (see eAppendix [available at www.ajmc.com]).

The 50 US states were included in the data analyses; Guam, Puerto Rico, Armed Forces, and other countries were excluded. Our study specifically focused on family practice providers, and, as such, other providers were excluded from the analyses. Cases with missing gender info were also excluded. Descriptive statistics, such as mean and frequency, were calculated for type of procedures, allowed amounts, submitted charges, and payments. Medicare Part B provider-allowed amounts, charges, and payments by region were also computed using 1-way ANOVA. SPSS version 22 (IBM Corporation, Armonk, New York) was used to perform all statistical analyses. All P values <.05 were considered significant.

A larger question is how the differences in utilization patterns and billing charges emerge and what sustains them. Variations in average submitted charges, average allowed amounts, and average payments in relation to specific procedures show how differently providers charge for the same procedures. For example, region 2 (North Atlantic) had the highest maximum average submitted charges ($6363.38) for office/outpatient visits, and exceeded all other regions by far. Office/outpatient visits may be costly, but providers submitting an average amount this high should be noted, especially when compared with the lowest maximum average submitted charges ($406.27) from region 8. Overall, the average provider-submitted charges were ($99.88) and average Medicare payments were ($39.99), with 43% of total submitted charges paid to family practice providers overall in the United States. It has been suggested that there is less substance to the relationship between billed charges and actual physician costs in time and services than conventional wisdom would hold,23 and that the fee-for-service model is an obstacle to value-based medical care.24

The SGR funding formula was implemented in 1998 as a way to limit the growth in physician service fees, but has failed to meet targets.25 Although payments are based on the SGR, provider charges are still important to determine whether providers may be over- or undercharging. Since SGR is formulaic, payments to providers are based on matching the target SGR. Depending on expenditures exceeding or being less than expected, conversion factors would either increase or decrease provider payments. If providers are overcharging, the conversion factors are more likely to decrease payments to providers since expenditures would increase, and may possibly exceed the target SGR.19 And as more physician services are being performed and billed for Medicare Part B beneficiaries in certain regions, Medicare regional payments vary as a result; this would explain our finding of region 4 having the highest amount of Medicare Part B beneficiary services with lower average reimbursement payments. A bundled payment per clinical episode has been proposed as a solution to the lack of cost-cutting effectiveness in the SGR reimbursement schedule.25 Other healthcare reform attempts endorsed by primary care organizations that might eventually alter physician service utilization include the patient-centered medical home model (PCMH), with the intention of increasing care coordination and accessing technological decision support in providing patient-centered care.26 The PCMH model includes recommendations to alter the methods of physician reimbursement. Recent evidence indicates that physician practices are increasingly utilizing care management processes emphasized in the PCMH model, and medical practices more involved in public reporting of data and pay for performance programs were more likely to use these care management processes.27

Because the initial data set released by the CMS was limited in content, our findings were thus limited as well. First, the study was unable to identify whether charges not covered by Medicare Part B were made by other resources, such as private insurance or other federal programs. Second, there was no information on provider race, ethnicity, salary level, quality of service, or patient demographics. Family practice provider demographics are unknown, which does not allow for conducting analysis on racial disparities of providers throughout geographic variations. Another limitation was that procedures were unequally distributed, with some providers performing more procedures than others. These variations are a potential source of information about medical costs and patient outcomes requiring additional study. Provider records with 10 or fewer beneficiaries were not available in the data set, thus limiting interpretation for practices with limited Medicare Part B patients. Additionally, the quality of provider services might be greatly influenced by the Medicare-allowed amount and provider charges, and they need to be considered when analyzing provider charges and payment. As this information was not available, further analyses are needed after CMS releases additional data in the future.

This study represented one of the first opportunities to explore Medicare Part B provider utilization and payment data for family practice physicians. Shifts in health care policy and an aging population are expected to increase the demand on family practice providers. Thus, it is important to examine patterns of family practice provider payments and charges across the United States to better understand accountability of care. The study demonstrated wide variation in charges and reimbursements that are not fully attributable to cost-of-living variations, as well as variations in the types of procedures performed by region. Results from this study may help both family practice providers and policy makers become more aware of these variations, helping them make prudent decisions regarding effective disbursement of resources. This study can inform future research concerning disparities in accessibility and costs of care and, more specifically, in family practice.

The authors thank the Quality Outcomes Research and Assessment at the University of Utah Department of Orthopaedics for supporting this study. 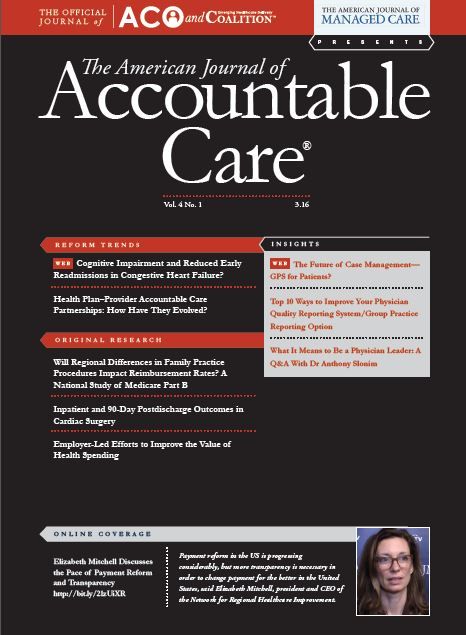